Email of the day on the Dollar
Comment of the Day

Email of the day on the Dollar by Eoin Treacy

One point: I hear from various parts /commentators and sometimes you also comment about the strength or weakness of USD

Why is it that people see rising inflation in the US and - consequently - potential rate hikes as USD bullish?  Every time any news hints to potential rising inflation (like the wage growth number on Friday) the crowd jumps in and buy the USD for a couple for days (and sell gold like last Friday).

Inflation is - if anything - eroding the purchasing power of the USD. I don’t get how this can be USD bullish.

Not even the rate hikes by the FED to counter inflation are bullish. If you look back, the USD has stopped rising vs EUR when the FED has started hiking in Dec 2015. And when the hikes accelerated in 2017 the USD tumbled.

On the opposite, countries fighting against deflation / or low inflation and low or negative interest rates like JPY or CHF, have positive trends.

To me all this bullishness on the USD on rising wage numbers (hence inflation fears) look strange. I don’t believe it lasts beyond the short-term reaction of a couple of days (interesting: helped by the sell-off of risky assets USD was down big vs JPY today on Feb 5).

P.S. one point I also hear over and over from commentators is that the interest rate differential is in USD favor and that is USD bullish.

So what:  if you are a EUR or JPY investor, the forward premium that you pay on a ccy hedge wipes out your entire interest rate differential and more if you include broker spreads

Thank you for this insightful email which raises a number of points which I hope I can do justice to. There are two points that we need to address. The first is of the dollar, or indeed any fiat currency, as a store of value, then the individual merits of fiat currencies which are necessarily ratios because one cannot buy one without selling another.

Gold is hands down the best monetary asset for holdings its purchasing power since an ounce of gold today can buy pretty much the same quantity of goods it could 50, or even 100 years ago. If one takes that long-term perspective then fiat currencies cannot compete. As with any currency, relative values fluctuate so, we get medium-term and even secular trends.

However, if we look purely within the foreign exchange field, trends seldom last more than a few years.  David has long said “no country wants to have a strong currency, while some need a weak currency more than others”. If we apply that logic to the US Dollar and its relationship to other fiat currencies perhaps we have something to base our rationale for looking at the market on. 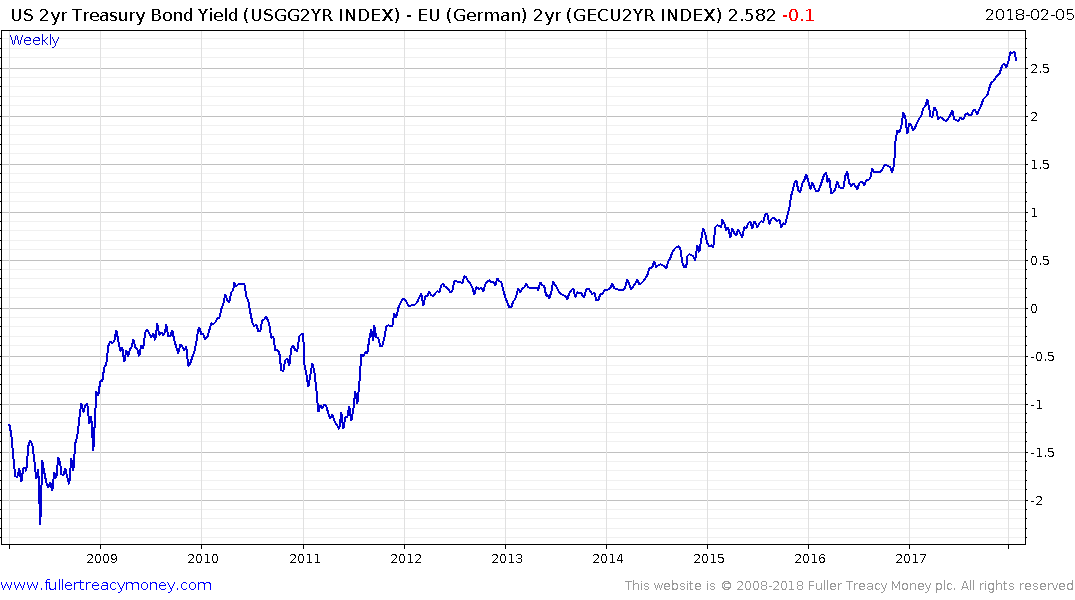 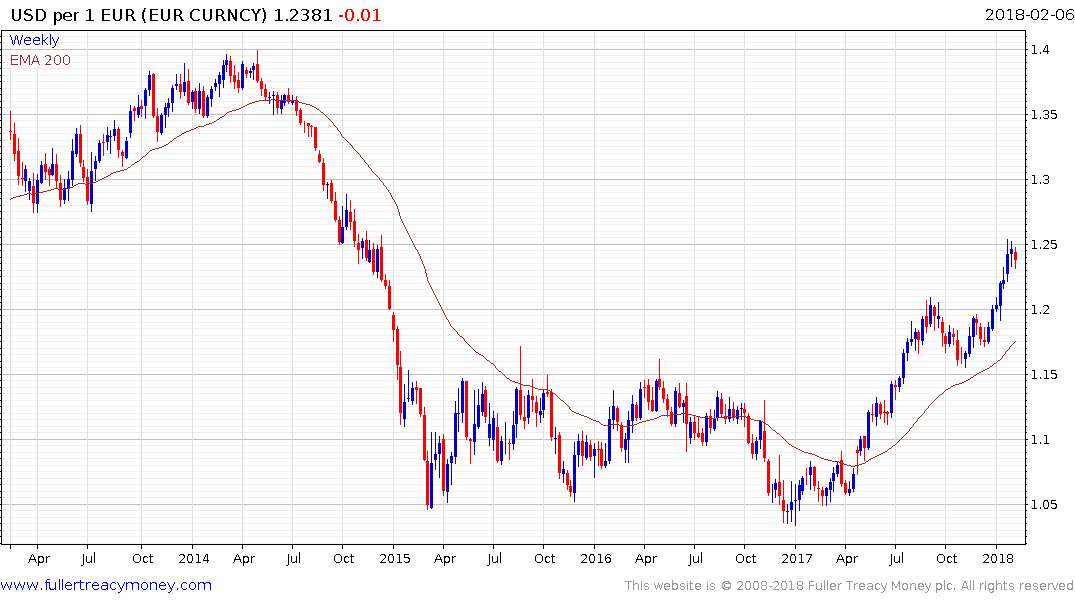 The Euro/Dollar exchange rate was volatile between 2009 and 2011 but the differential was in favour of the Euro so it was reasonably firm. When the differential moved sharply in the Dollar’s favour, with the introduction of quantitative easing by the ECB from 2014, the Euro declined sharply.

However, this does not explain the Euro’s rally over the last 12 months. For that we need to look at the likelihood the ECB will remove stimulus, and the impact outright deficit fueled stimulus has on the USA’s fiscal condition and the relative growth rates of the Eurozone versus the USA.

Draghi was quick to point out yesterday that he cannot conclude deflation has been defeated because the Eurozone is not especially enamored with the strength of their currency.  Nevertheless, just as the bond market has been behind the curve in pricing in additional tightening by the Fed, it appears a similar condition is evident in the currency market. So, let’s say that for the moment, anticipation of rate hikes is offsetting the impact of debt-fueled stimulus on the Dollar. That leaves the ECB’s tapering and potential exit from stimulus as the primary fuel behind the Euro’s rally.

Concurrently the Eurozone is growing impressively again and last year the nominal growth rate was similar to the USA’s. The rate of change however is probably faster in the EU considering it is coming from a low base.

A large proportion of S&P500 earnings are derived overseas, so a weak dollar flatter’s earnings and also makes imports more expensive. Little wonder then that the Trump administration is supportive of a weaker currency. However, in extremis, liquidity and security surmount just about all other considerations. The Dollar tends to rally in times of stress because it’s the world’s largest currency and therefore has safe haven qualities. 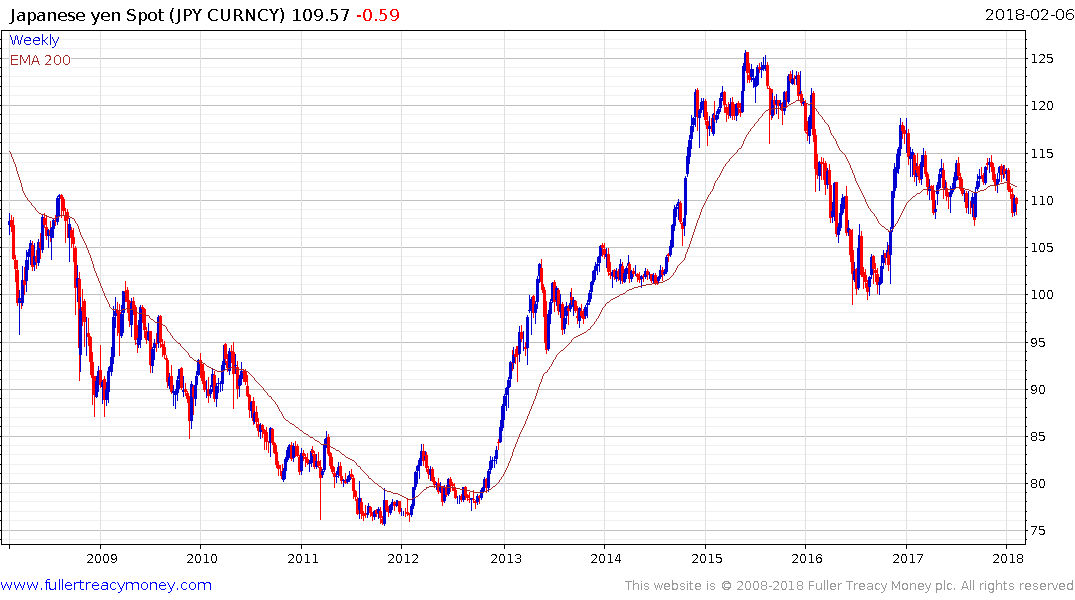 Both Japan and Switzerland run current account surpluses but they also try and retard the gains in the Yen and Franc my keeping interest rates low and supply abundant. In times of stress they tend to rally even faster than the Dollar because carry trades are being unwound by leveraged traders.