Email of the day on the bearish perspective by Eoin Treacy

I have been a subscriber for almost a decade and enjoy listening to your video presentations and reading the comments. No hurry, but would be great if you can spare your time to offer your thoughts on Dr. John Hussman's comment, link here:

Thank you for your support and for this article which may be of interest to the Collective. Here is a section:

It’s important to recognize that despite its discomfort, the market decline we observed in October is only a drop in the bucket toward normalizing valuations. I’ll say this again, because it is important. Over the completion of the current market cycle, I fully expect the S&P 500 to lose close to two-thirds of its value from the recent peak. We don’t require this outcome as a precondition for adopting a bullish market stance, as an improvement in market internals alone would encourage a neutral or even constructive market outlook (though with a safety-net given present market extremes). The problem is that there is no market cycle in history, even at the 2002 low, that ended at market valuations greater than half the level they established at the recent peak.

This is clearly not a favorable outlook for passive investors. While investors have embraced passive strategies as a result of strong backward-looking returns, this popularity represents little but performance-chasing at the most extreme valuations in history. At the recent market peak on September 20, we estimate that the prospective 12-year total return from a conventional passive asset mix invested 60% in the S&P 500, 30% in Treasury bonds, and 10% in Treasury bills reached a low of just 0.48%. There is only one instance in history when these estimates were lower, which was in the 3 weeks immediately surrounding the 1929 market peak. Given that most pension funds assume future returns in the range of 7% annually, it implies that the coming years are likely to include a rather widespread pension crisis.

Shorter-term, remember that bear markets regularly include scorching advances from oversold conditions, each time prompting dip-buyers to exclaim “New highs, here we come. Am I a genius or what?” and encouraging long-term investors to breathe “Phew, I’m glad that’s over.” A typical bear market includes several waterfall declines, along with multiple interim recoveries approaching even 10-20%.

Is the market topping? That is the most profound question any investor can ask and it is highly relevant right now because there have been two significant stabs to the downside this year.

There are some big questions being asked, ranging from how much of the big October swoon was because of fears Treasury yields are rising too quickly? How much was based on fears a Democrat surge and subsequent impeachment of the President would rile markets? How much was centred on the decline of the semiconductors sector which was catalysed by the breaking of the Chinese interdiction of the supply chain story. How much was because of the extraordinary valuations relative to history?

When a consistent trend becomes inconsistent we have grounds for more caution. That is definitely true so this is a good time to be asking these questions and I have been saying for about 18 months that we are in the third psychological perception stage of the medium-term advance from the 2008/09 lows so that is an additional reason to be asking this question.

Let’s take it from first principles. Explain the market action to a blind person. 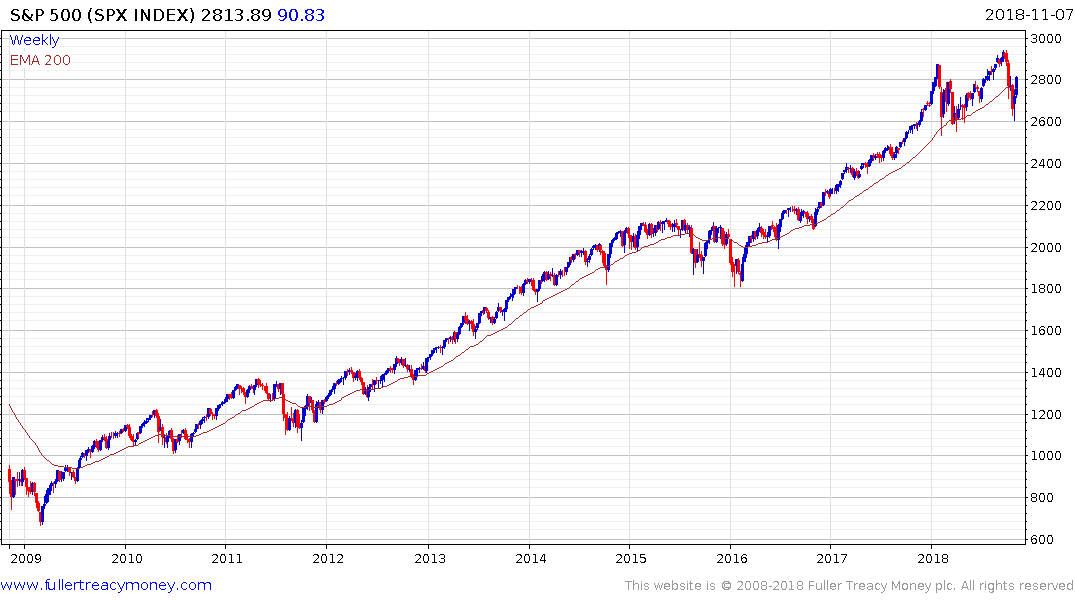 Is the market trending or ranging? The broad trend has been up and it is now ranging.
Has the trend been consistent or inconsistent? It was pretty choppy for the first few years. Then it trended very consistently until a sharp drawdown in late 2014. After that it lost momentum and ranged for the next year and half. During that time there were a couple of abrupt stabs to the downside but it rebounded back above the trend mean in early 2016 held the move above the trend mean and broke out to new highs in July.

The trend up from that breakout was even more consistent than the first portion and it did accelerate towards the peak in January 2018.

The sharp drawdown from that peak was the largest in nominal terms since at least 2016 or 2011. It then bounced around the trend mean for a couple of months and rebounded to hit a new high but could not hold it and fell back test its lows. It is now rebounding again

How do you define acceleration again? It’s a trend ending but of undetermined duration. Therefore, the acceleration in 2017 has at least led to this rangier phase.

Is there anything else that is inconsistent? The failed upside break suggests the vacuum of supply above the range, that needs to form if a breakout is to be sustained, had not formed in September. That tells us supply and demand have at least come back into relative balance following a particularly consistent portion of the medium-term uptrend.

Do you have evidence of topping activity? The acceleration was a medium-term topping signal and the failed upside break is worrisome. However, the acceleration was not so large as we have seen at other peaks. For that we need to pay particular attention to the technology sector. 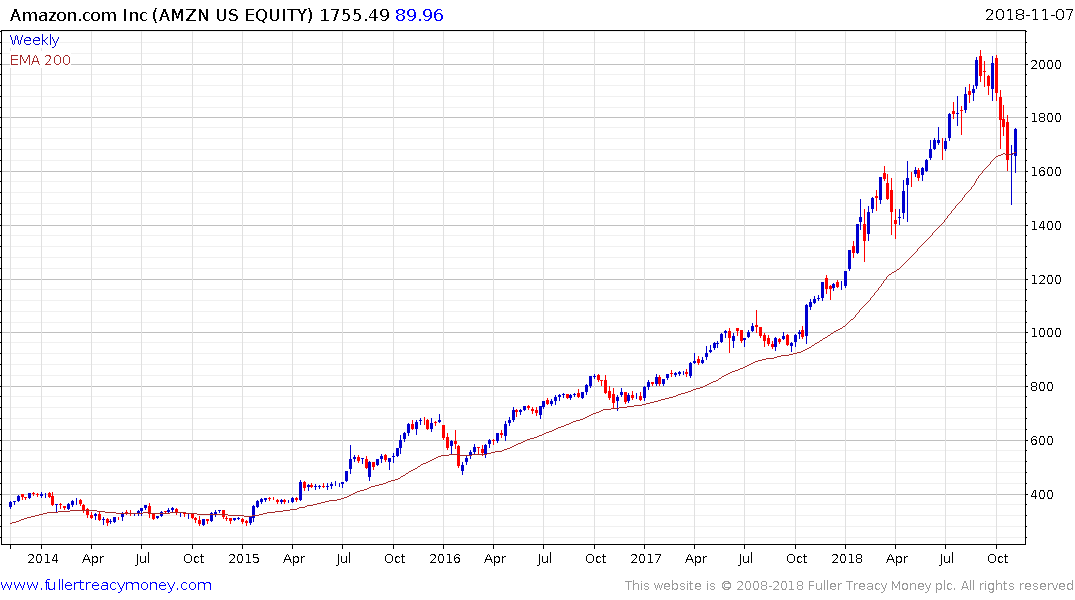 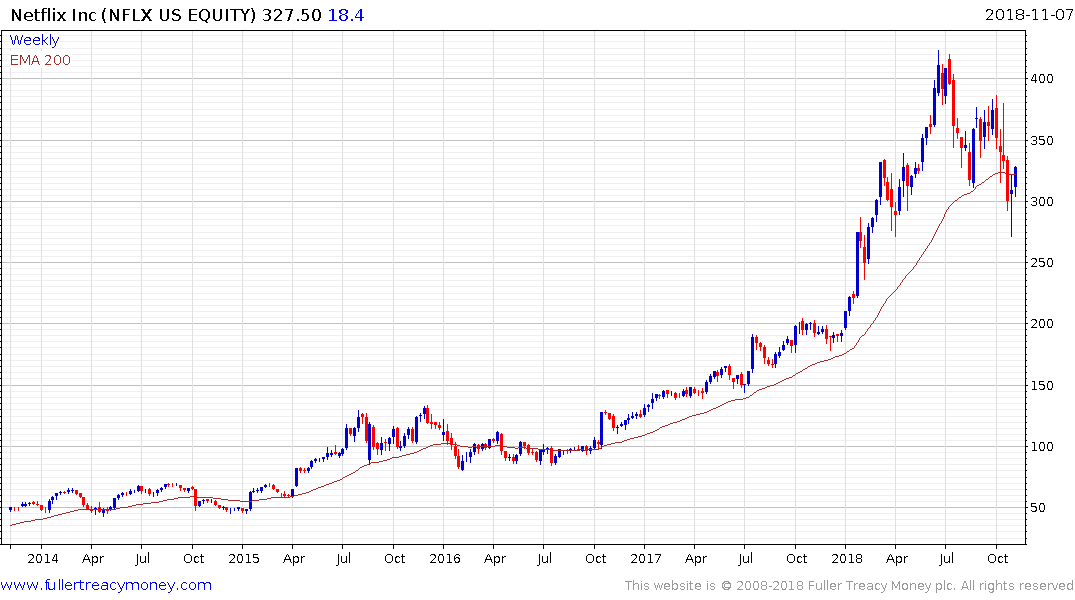 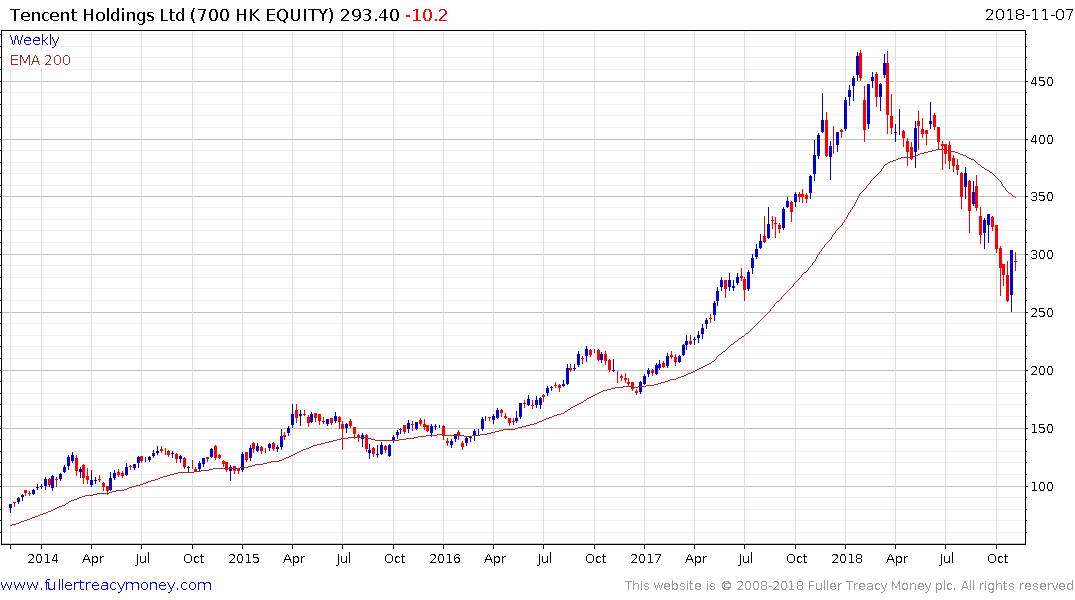 Netflix doubled in the six months to its peak in June and Amazon doubled between its October 2017 breakout and its peak in September. In China Tencent Holdings more than doubled in 2017. If we are looking for acceleration that is the best place to start.

It is also in the technology sector that the biggest Type-2 top characteristics are present with massive reactions against the prevailing trend also present in a significant number of shares following their accelerations. The ranging, time and size of Type-3 tops is not present. However, it is also worth highlighting that these shares have all found at least near-term support.

So, we have evidence of a top but it is premature to say this is THE top.

I agree with John Hussman big tops can be violent affairs with large peak to trough swings but if indices are trading above their 200-day MAs then on average prices are still rising.

I see a lot of people talking about major declines and that is to be expected after we have experienced a short, sharp fright. A 60% decline on the S&P as Hussman is predicting would take the S&P500 to 1176 from its peak value which exceeds even the most bearish prognostications I have seen.

If this year’s range is indeed a medium-term correction then the 2500 level is an important psychological level. It would be normal to see some consolidation between the low posted last week and the September peak and that could last a few months. If the next range takes place above the trend mean then the case for a breakout to new highs would be a lot more credible. The return to performance of dividend growth companies with strong cashflows is both defensive and also justified considering the uptick in Treasury yields. 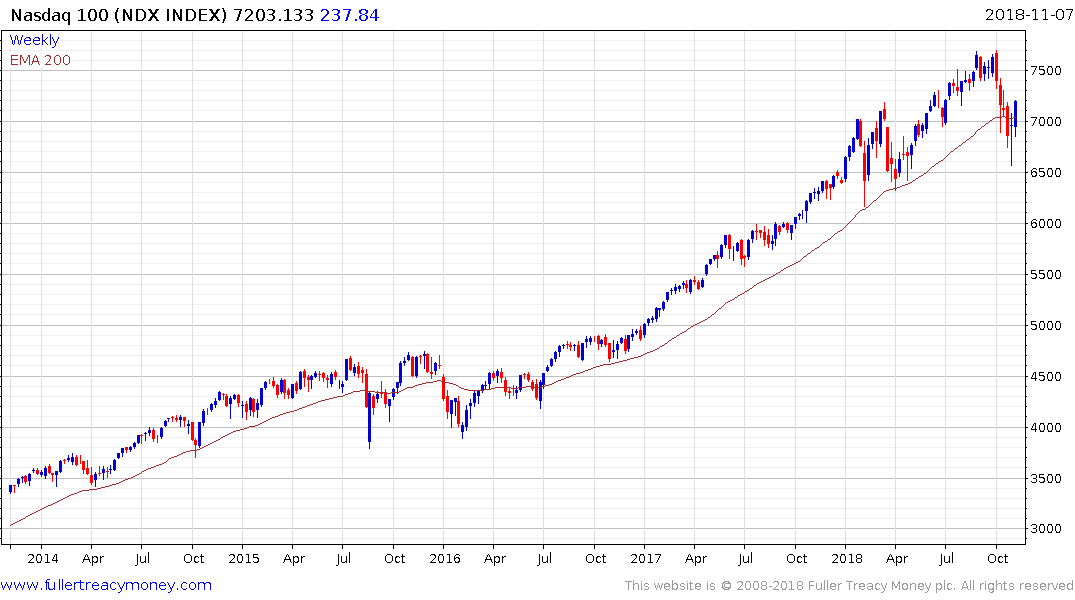 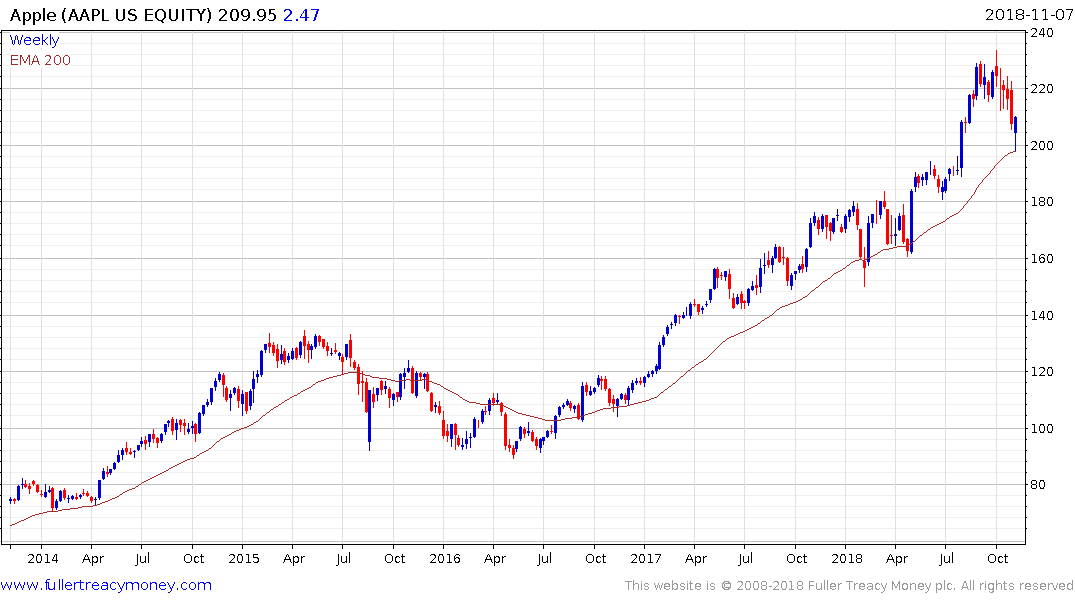 The one outcome that is getting no credibility right now is the case for a big acceleration by the broad market. People tend to predict what they see and right now they see a lot of choppy action. However, it is important to remember that major bull markets, defined by lusty risk appetite can end in acceleration. As a contrarian I feel I have to highlight that as at least a potential possibility. That would take valuations to even more extreme levels historically and create an undeniable bubble.