The email of the day yesterday on global macro outlook (plus Eoin’s reply) prompted me to write my thoughts on whether high tech is played out. Actually I think just the opposite. In agreement with David and Eoin, I believe we are in the early stage of massive new growth generated by breakthroughs in technology.

A year ago I attended and presented at a conference in New York City entitled “Are You Ready for the Third Industrial Revolution?” While preparing my presentation I did a lot of research on factors that drive an industrial revolution. I’ll summarize here for the sake of brevity, but I think one can identify three main themes: a new more efficient energy source, improved communication/transport systems, and improved financial structures.

In the first industrial revolution, innovations in England from approximately 1790 led to the replacement of wood power by coal power; new transport systems based on steam-power initially for boats on canals followed by the first railways; steam-power drove the first mass printing presses which led to mass education for the first time in human history; and a new financial model based on the first stock exchange initially out of Lyons coffee house on the Stand in London.

The second industrial revolution, a century later, was jointly driven by US and European inventors. It followed a similar pattern, with oil replacing the less-efficient coal; development of new transport based on the internal combustion engine out of Europe with Messers Daimler and Benz being the most notable contributors; the building of mass transport highways for the first time, electrification of cities driven by the incredible inventiveness of Thomas Edison; and a new financial breakthrough in the form of the limited liability company.

So, where are we in the third industrial revolution? One of the three factors that drive an industrial revolution must be clear to us all. We all use it every day. The internet is a massive breakthrough in communications. It is now linking all humanity instantaneously for the first time. The impact on communication efficiency, spread of ideas, synergy of creativity globally, and global education is already very clear. At the time of the conference last year I was less sure about the second factor, a new energy source. Gas is a stopgap in my mind, a last play on the hydrocarbon theme, though likely to be very significant in coming decades in driving down energy costs. But over the past year my reading around solar power has convinced me that it is just about ready to make a major impact. The efficiency of capture of sunlight was until recently in the 10% range and depended on expensive ingredients in the panels. But breakthroughs in graphene technology suggest that 50-100% capture efficiency is achievable and the materials will be very low cost. The impact could be absolutely incredible. (Think through all the ways it could change energy generation and usage. Thankfully, it will soon bypass windmills and other “green” energy sources currently in vogue).

The third factor, innovation in our financial system, is a clear need and currently unsolved. I am wondering whether crowd-funding is part of the answer at least, and I have personally invested Angel money in helping build one company here in the UK.

Finally, one additional point is worth making. Eoin hinted at this in his response yesterday to the email of the day. He was referring to medical breakthroughs (my own field of work) but his comment is applicable to all fields I believe. New technologies take a long time to develop to a level of real usefulness and payback. I did a lot of research on this over a decade ago and I gave public presentations and published research papers on this matter. All the evidence is that it takes 15-25 years for any new technology to get to the "payback” phase. This seems to apply to all technologies in all fields. Moreover, the eventual real value of a new technology may not be obvious at first, and it may differ from the intentions of the original innovators.

Personally, I have been building a second investment portfolio alongside my usual “trend-following” portfolio. I have been buying ”Third Industrial Revolution” companies, those that are driving the revolution, mostly in the USA and UK. By applying trend-following principles in selecting when to buy I have achieved gains of 10%-70% for over 20 companies over the past year. It is really interesting to build such a portfolio as it makes one very aware of the incredible breakthroughs and moreover keeps one very positive about the future! If other members of the collective are building such portfolios it would be interesting to share ideas and experience.

Thank you for this enlightening email contributed in the spirit of Empowerment Through Knowledge which as you point out is very much in line with our view.

In the realm of innovations in the financial sector, classic economic terms such as GDP and GNP are not particularly appropriate for a global system where capital can move relatively freely in search of the most attractive opportunities. The iPhone is a great example of how inefficient our view of value creation is. The majority of the benefit from the intellectual property resides in the USA, but many of the parts are assembled elsewhere and the phone registers as an import on trade figures.

In monitoring markets, we see that accommodative monetary policy in one jurisdiction has the capacity of fuel investment booms in other countries. However, the role of money flows in fostering global growth dynamics is more difficult to demonstrate in concrete terms. I suspect that when we think about financial innovation, what we need is a new way of conversing about global capital. Local considerations will always be important and protectionism is an ever present threat but the global macro environment is likely to become increasingly important.

As a medium of exchange and partnership, I wonder if Bitcoin and other crypto- currencies represent the thin end of the wedge in unleashing excess savings for investment and overcoming capital controls. It will probably be at least a decade before we have any semblance of an answer to that question. 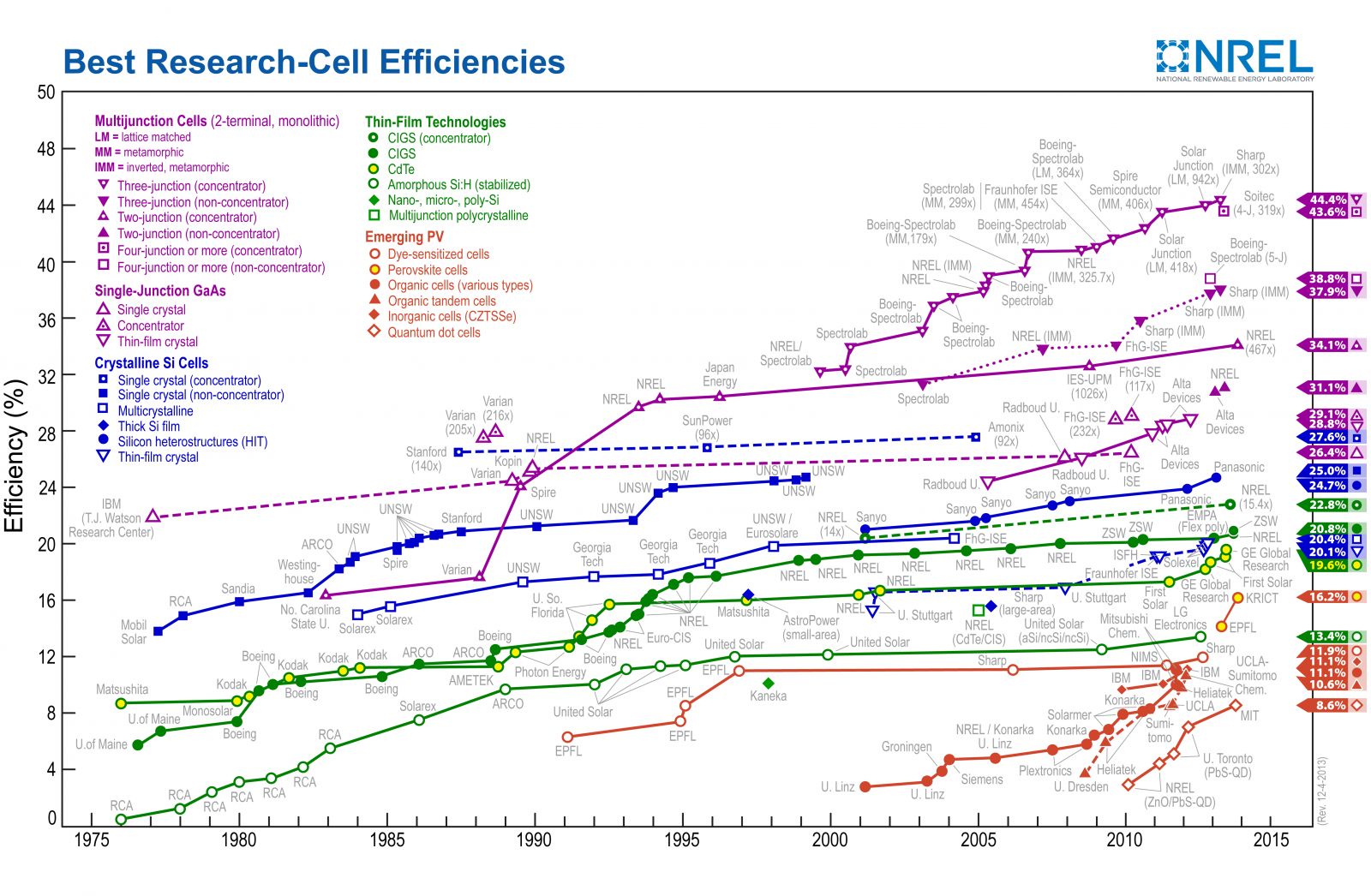 I’ve posted this fascinating chart from the USA’s National Renewable Energy Laboratory on a number of occasions over the last year. I find it useful because it highlights the improving trajectory of solar cell efficiency but also the fact that totally new technologies are appearing at an increasing rate and the pace of obsolescence is also increasing. Therefore while graphene is a technology that is still in its infancy, it is not difficult to imagine the potential for innovation.