Email of the day on South African governance:
Comment of the Day

Email of the day on South African governance: by Eoin Treacy

In your recent big picture video, you outlined the possible trajectory of some of the emerging market currencies in a declining dollar environment. Some time ago I emailed in to state my reasons why I thought the ZAR might be one of the worst in the immediate future. Events since the recent election have only served to confirm that view. At the moment there is a struggle going on in the ANC regarding the mandate of the Central Bank The powerful ANC secretary general wants the mandate changed from the focus on inflation to include growth and jobs considerations. In a public statement this week, Mr Ace Magashule wants the bank to embark on a policy of "Quantity Easing" whatever that might mean!! This would inevitably send South Africa in the direction of Zimbabwe. This country could end up worse than Zim for the following reason.

Recently, there have been a series of xenophobic attacks involving firebombing of trucks on some of the main motorways. Local companies have been employing drivers from Zimbabwe who are intelligent and highly motivated at the expense of local South Africans. The history of primary and secondary education could not be more different in these adjacent countries. Even under Mugabe the colonial legacy of education was left in charge of the churches who maintained a strong culture of teaching and learning rooted in Christian values. Zimbabwe still uses the Cambridge University exams for both "O" and "A" levels set in 1954. In South Africa, the Apartheid government passed the Bantu education act into law which took away the control of the churches and gave it to the state. This has proved to be an unmitigated disaster by any measure. The last thing South Africa needs right now is a huge population of poorly educated young people currently around 30% many of whom embrace a culture of entitlement

Thank you for this on-the-ground perspective of the environment in South Africa. The dumbing down of curricula is a global phenomenon linked to the cutting of educational funding, the expanding power of teacher’s unions, the lack of commitment from parents to take responsibility for the education of their own children and the desire of politicians to show results against a background of deteriorating fundamentals. It’s a secular trend and shows little sign of changing because it would require everyone to work harder for a distant benefit which seems to be beyond the ability of society to collectively deal with right now.

South Africa’s challenges reside in the failure to deliver on the higher standards of living the majority expected with the demise of apartheid. A massive young population represents a demographic dividend but only if it can be mobilised to develop the economy rather than a recourse to rehashing the tax the wealthy argument. Fiscal and monetary stimulus have become almost permanent features of the developed market economies. It is probably only a matter of time before we see similar policies adopted by developing economies. 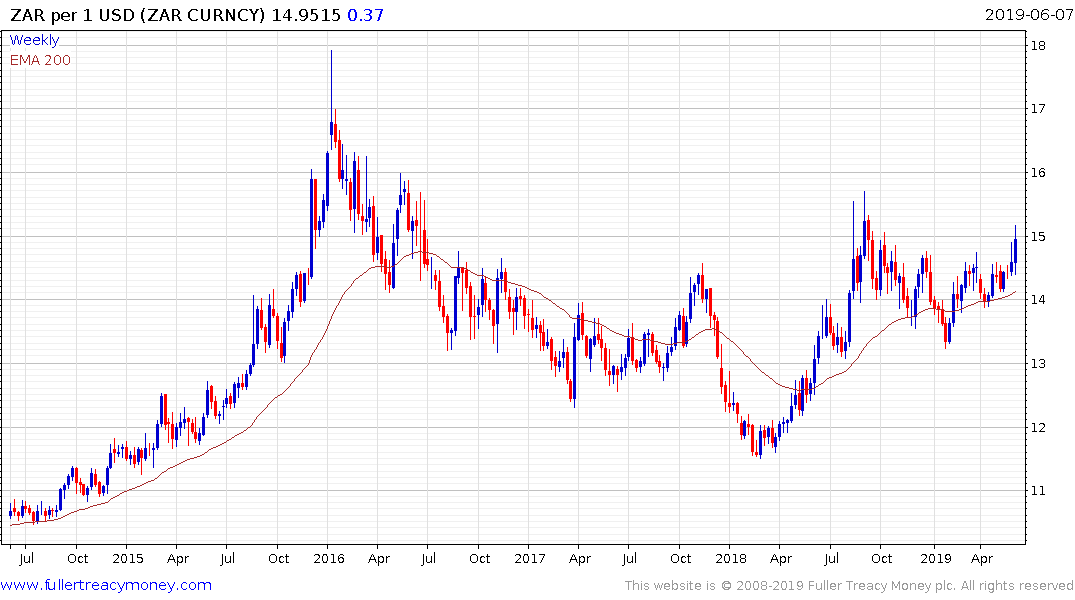 The Rand is just about holding on because of its wide interest rate differential with the other currencies and it bounced today with the easing of trade tensions between the USA and Mexico. However, a substantial improvement in standards of governance is likely required before more than a short-term bullish argument can be built.