In a mid-year commentary, which I cannot locate, you presented a strategy for coping with the customary October seasonal downturn.  Implementation of that advice will have saved subscribers many years of subscriptions.  Thank you for those invaluable comments.

More recently you have devoted much time discussing the dual impact of rising interest rates and Fed balance sheet reduction.  The attached article (a bit long) states that the US Fed, being excessively influenced by equity markets, but ignoring an already slowing real economy has tightened excessively and, because of lags in the effect of monetary policy, will not now succeed in reversing the economic downturn already underway.

Trying to second guess the Fed while anticipating an inevitable slowing economy is making portfolio management even more difficult than usual.

Thank you for this kind email and I am delighted you are getting value from the service. There are two Fullerisms I have been ruminating on recently. The first is “monetary policy beats most other factors most of the time” The second is “the Fed has killed off more bull markets than all other factors combined”.

Here is a section from the conclusion of the article you included:

The Federal Reserve has pushed monetary policy too far. It makes sense that the market is rapidly pricing out future monetary tightening. There is a high probability that if the Fed raises rates in December, this will be the last hike of the economic cycle.

Even if no rate hike occurs, balance sheet reductions will still be running in the background, reducing excess reserves, putting further strain on the banking sector and perpetuating a deceleration in economic growth.

The Federal Reserve has already pushed too far.

Tops are more difficult to spot than bottoms because it is much more difficult to determine value in a rising market and people have less incentive to question the status quo. It was an easy call to think the market would experience indigestion at the prospect of the Fed raising interest rates and reducing the size of its balance sheet simultaneously.

For the economy the interest rate is probably the most important factor which helps to explain why the US economy is still expanding. However, for asset prices the provision of liquidity is probably more important. The fact that the Fed began to reduce the size of its balance sheet, in earnest, at just the same time the stock market pulled back is hardly a coincidence. The existential question for this medium-term trend since 2009 is where the major source of liquidity infusion is going to come from. Right now, that’s not an easy question to answer so asset prices are pulling back to varying degrees. Bull markets thrive on liquidity so it is reasonable to expect this one will not resume in a vigorous manner until we see liquidity. 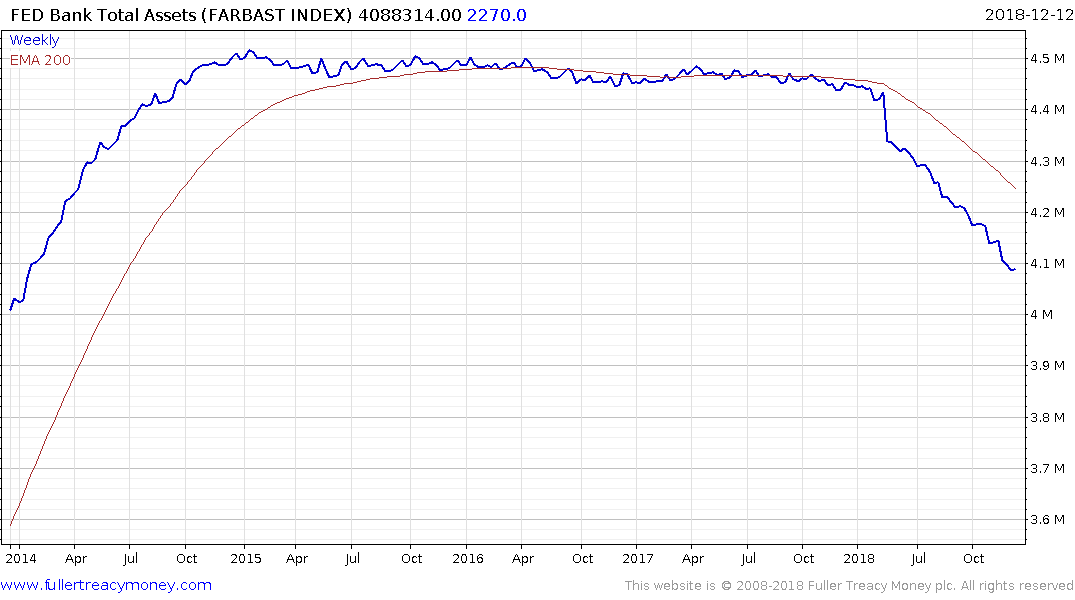 The eyes of the market are now keenly watching what the Fed will do next. If they pause raising interest rates that has already been priced in to a certain extent. However, if they pause in reducing the size of the balance sheet that would be taken as a strong signal of support for the market. 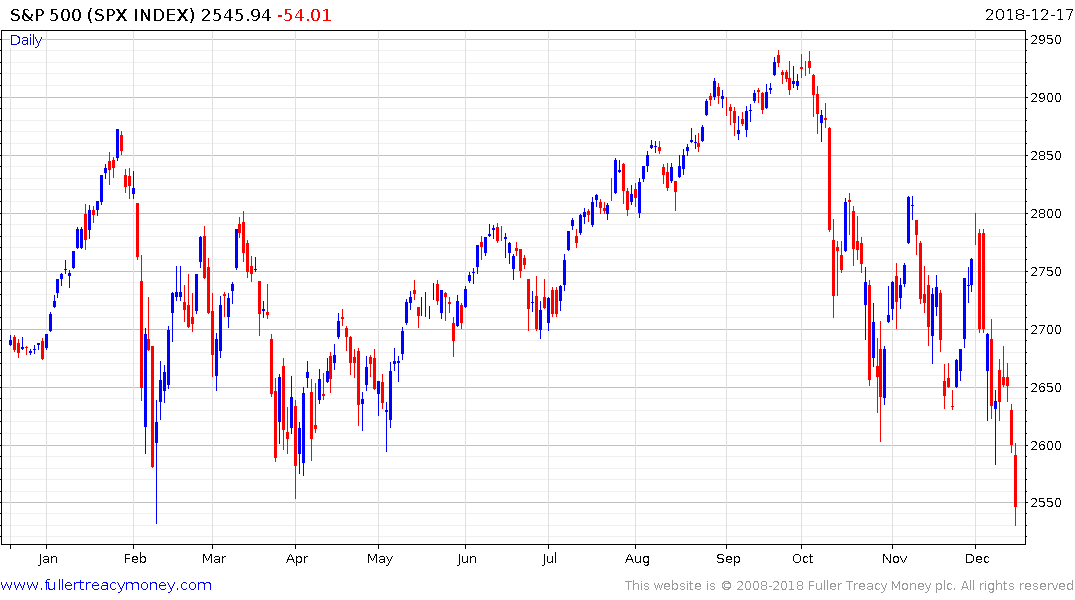 In the meantime, the S&P500 closed at a new low today. It is oversold in the short-term and there is a definitely some selling the rumour activity going on. That holds out the prospect of a rebound on Wednesday but it will need to be dynamic in nature and the low will need to hold if it is to prove to be more than short-term steadying. A sustained move back above the trend mean will be required to question the medium-term supply dominated environment.