Email of the day on Saudi Arabia
Comment of the Day

Email of the day on Saudi Arabia by Eoin Treacy

Your rather surprisingly positive reportage from Saudi Arabia awakened my interest in their stock market.  I found to my surprise that it is nearly perfectly correlated with a broad commodities index. This is not because it is just the oil price, as that takes up only a small part of the commodities index, and oil companies take up only a small part of the Saudi stock market.  The two markets I am comparing are IKSA and COMF, both in London.  Do you have any ideas about why this correlation is so tight?

It would be nice if you would revisit the market from time to time and give us your opinions on it.

Thank you for this email which highlights an important aspect of the Saudi market. The SASE Index is predominately weighted by banks. This being Saudi Arabia they are run on Islamic principles so loans are less leveraged relative to deposits than one might see elsewhere. Additionally, companies are not allowed to list until they have posted profits for three consecutive years.

Banks make up for the lack of traditional leverage by making investments. The most expedient way to make investments is to lend money to domestic businesses. The national priorities laid down in the Vision 2030 strategy are to turn Saudi Arabia into a regional mining, industrial and technological hub. Mining investment is blossoming in the region and miners face fewer ESG obstacles than elsewhere. In the eyes of investors Saudi Arabia is an energy market, so it will trade in line with commodities more often than not. 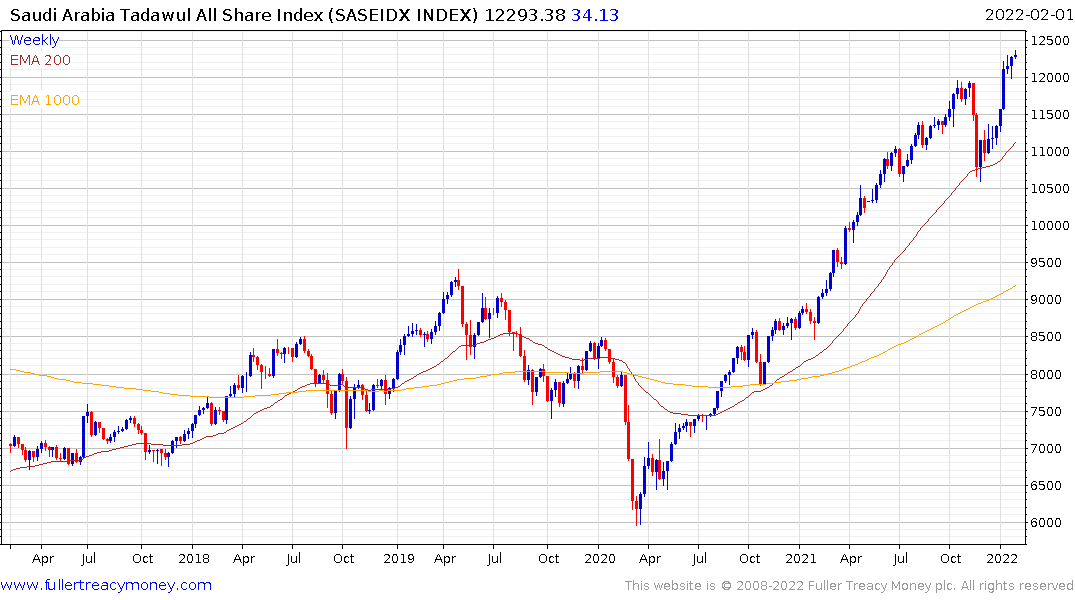 There is also a relative value argument in Saudi Arabia’s favour. The country is actively lobbying to have Middle Eastern corporate headquarters move from the UAE. The announcement of a new corporate tax yesterday in the UAE will likely be used as a bargaining chip in attracting companies particularly considering the many free trade zones in both countries.