Email of the day on risks versus liquidity by Eoin Treacy

The trillions of US dollars / Euros / Yens etc. given to us by central banks and governments are like painkillers leading us to feel better than we should feel. The SP500 back at over 3.000 point. Stock markets look one year ahead, right? But aren’t we too optimistic? Consumers in the US are either without a job and or savings or they are saving more than usual, which is a serious headwind. Forty percent of people with a lower income have lost their jobs. As if all those SP500 companies do not need any customers, really? If large companies cut costs there is less income for other smaller companies. This domino effect is just starting, meaning even more people will be without job soon. Maybe I’m too negative, I really hope I’m wrong. Back to the stock market. To avoid a subjective vision on the stock market I’m looking for indices to give me an objective warning signal of a top. There are four indices I selected: ND100, Fang, VIX and AD/DE. I would like to hear your opinion and suggestions about this please. Looking forward to Friday’s big picture video. Have a nice weekend.

Thank you for this question which I believe just about everyone has an interest in. I will distil it down to the simple question of whether liquidity provision trumps all other factors combined? It’s a big topic but the evidence over the last 12 years supports the view that the primary result of quantitative easing is to inflate asset prices. With interest rate suppression actively underway nothing has really happened to challenge that conclusion. Nevertheless, prices do not go up in a straight line indefinitely and someone is going to have to pay for the largesse eventually.

The net result of the coronavirus will be to increase inequality. The people who are least affected by the lockdowns and quarantines are those with the ability to work from home, not work at all, and who have sufficient real estate to ensure they can comfortably maintain social distancing even at the best of times. The worst affected are those wholly dependent on providing discretionary services, with few financial resources, and who live in densely populated areas or multi-generational households. That is even before we begin to think about the added driver of inequality quantitative easing represents. The current surge in US street protests, burning and looting, in response to police killings of black individuals is a clear symptom of a wider issue.

I agree that the number of unemployed people and the resources required to support them represent significant challenges to the orthodoxy of monetary and fiscal authority. The reality is we are now in an era of modern monetary theory which is similar to the debt financing practiced in the early 1970s. The world’s governments have clearly signalled they are willing to expand deficits to levels few imagined possible only 18 months ago. That is necessary to provide some semblance of calm because the threat of public unrest is nontrivial.

Just this week Japan announced a $1 trillion stimulus, the EU and $750 billion stimulus and the USA’s money supply continues to expand. This represents a massive quantity of capital being dumped in the market in search of an attractive yield or potential for capital appreciation. Investors continue to deploy the playbook they have evolved over the last 12 years which is to bet on liquidity boosting asset prices. That’s true today of the stock market, bond market, gold and real estate. As long as the trend of monetary and fiscal largesse is intact it represents a significant tailwind to risk assets.

The challenge arises when we consider factors that fall outside of this trend of dependence on liquidity. Growing geopolitical tension with China is an example, and the inability of emerging markets to deal effectively with the coronavirus outbreak is another. China has a clear incentive to stoke nationalistic fervour at home, to paper over the cracks from the first recession in decades. That suggests an increasingly strident posture will be taken with the rest of the world. Meanwhile, everyone else also has a similar nationalistic incentive. The market responded favourably today to the Trump administration demurring from escalating tensions with China.

Perhaps the biggest question that remains to be answered is how closely the panic relating to the coronavirus mirrors that associated with Y2K in 1999. That event pulled forward earnings for the technology, media and telecoms plays and they failed to live up to expectations in 2000 when the issue was seen as a storm in a teacup and interest rates rose.

It is looking increasingly likely the lockdowns were unnecessary if efforts had been made to protect the most vulnerable, particularly those in nursing homes. I stand by my contention from back in February that this will be remembered as a euthanasia virus. The stock market is currently pricing in a benign rebound to normal economic activity, but the majority of institutions are predicting consumer behaviour will be altered forever. Here is one example from Franklin Templeton while Morgan Stanley has a more benign perspective.

I agree that monitoring the primary trends that are still consistent is important. It is also worth monitoring the performance of the new outperformers since they are likely to be the leaders in the next decade. 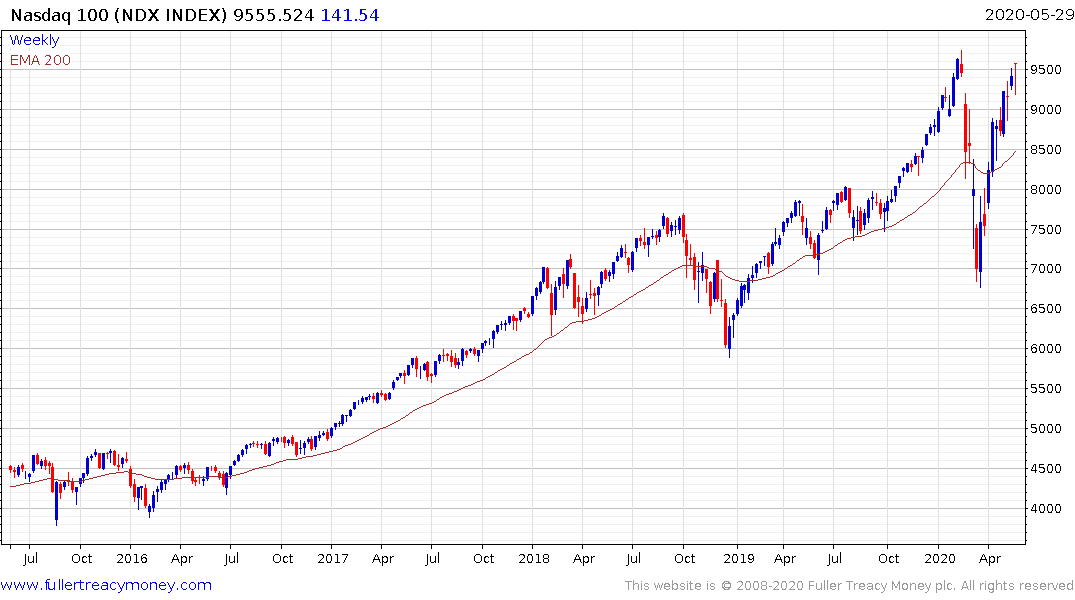 The NYSE FANG Index is in many respects an even more concentrated version of the Nasdaq-100 which is itself dominated by the mega-cap technology shares. Both are currently pausing in the region of their respective peaks. The Nasdaq-100 in particular is pausing below the psychological 10,000 level. The Index has plenty of room in which to consolidate and the region of the trend mean needs to continue to offer support if the medium-term uptrend is to remain intact. 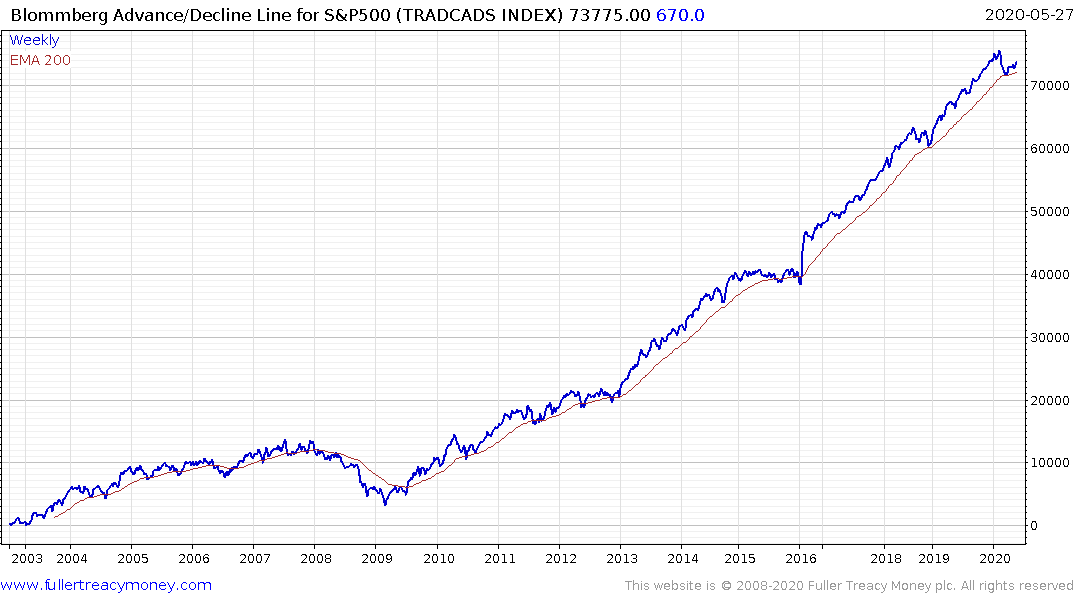 The Advance/Decline Line for the S&P500 is a useful indicator because it measures the number of stocks moving up and down rather than the extent of their moves. That helps to highlight the fact that the correction was similar to other corrections in the last 12 years, in terms of the number of stocks moving up and down even if the magnitude of the moves was much greater. However, it is also worth pointing out how concentrated the number of shares leading the market rebound has been. It needs to continue to hold the sequence of higher reaction lows if the medium-term uptrend is to be given the benefit of the doubt. 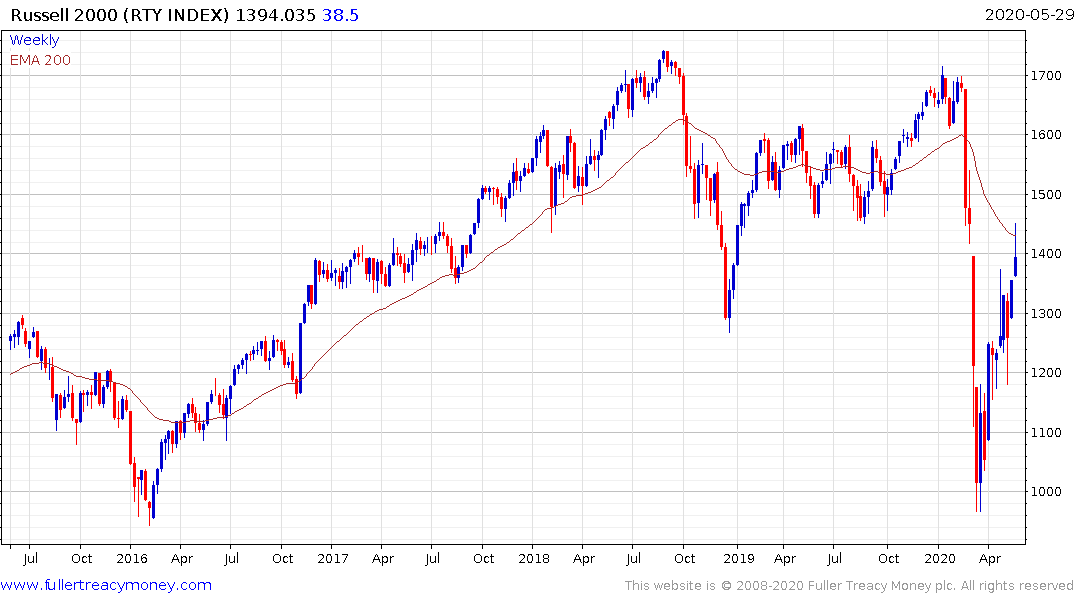 Many European markets and the Russell 2000 share a similar pattern. They are in varying degrees of unwinding their oversold conditions relative to their respective trend means. The Russell 2000 has at least paused below the trend mean this week. Ideally, the short-term sequence of higher reaction lows will hold but these indices continue to exhibit medium-term top formations. That suggests significant remedial action will be required to repair investor confidence. 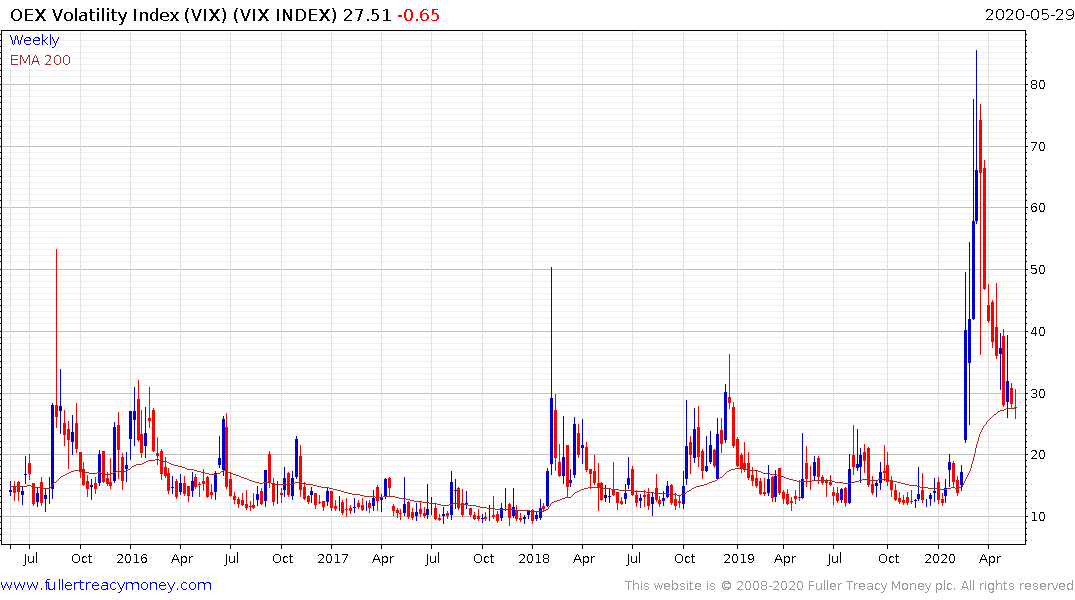 Surges in the VIX Index are a better indicator of market bottoms than declines are of market tops. Nevertheless, the Index posted an upside key reversal on the 12th. Over the last couple of weeks it has come back to test the lows, which now coincide with the upper side of the underlying base and the 200-day MA. A break above 40 would likely coincide with a potential deeper reaction than seen since March, or perhaps a retest of the lows in some cases.