One point to the bullish side I have yet to see discussed is the $2 Trillion in second mortgages resting on bank balance sheets. These are non-recourse loans that are tied to shortest side of the curve and could put the banks at risk should there be a meaningful increase in payment levels: the banks write it all off if the borrower walks. Today's B of A capital debacle showed me a degree of instability remains with the banks. Isn't the Fed appreciating this? If so, I suspect we are in the early stages of a long term policy of using the Fed balance sheet as needs must.

Thank you for this informative email. Just what banks have on their balance sheets is a constant source of concern for investors since there is so little discussion about the quality of the liabilities and how they are leveraged. Thanks also for responding to my question on the extent of adjustable rate loans in the equity release loan market in this follow up email:

Yes, 2nd mortgages of the home equity variety are in many if not most cases tied to LIBOR or T-Bills.  My logic chain tells me that during the crisis meetings of November 2008 Fed officials saw the immediate problems that technical insolvency brought to the banks, but during subsequent rehabilitation periods saw that igniting a potential liability source like those 2nd mortgages would be diametrically opposed to their goal of restoring the banks.  If I am right that problem still exists today although it is diminishing.

One of the objectives of lowering interest rates to near zero was to head off a potential avalanche of defaults on adjustable rate loans. Record low interest rates made refinancing into fixed rate loans cheaper while also increasing the allure of ARMs for more risk tolerant borrowers. The quantity of consumer loans tied to floating rates is probably less now than in 2007 but is a potential headwind for banks if we assume interest rates increases.

2013 was notable for record issuance of corporate bonds as companies took advantage of low borrowing costs to issue huge quantities of debt. This allowed them to optimise balance sheets, fund buybacks, increase dividends and in some cases to avoid repatriating foreign profits on which they would have to pay hefty taxes. Last year was also notable because “cove-lite” loan issuance also hit a new all-time high. The search for yield has driven investors back into exactly the same structures that were part of the epicentre of risk last time around. 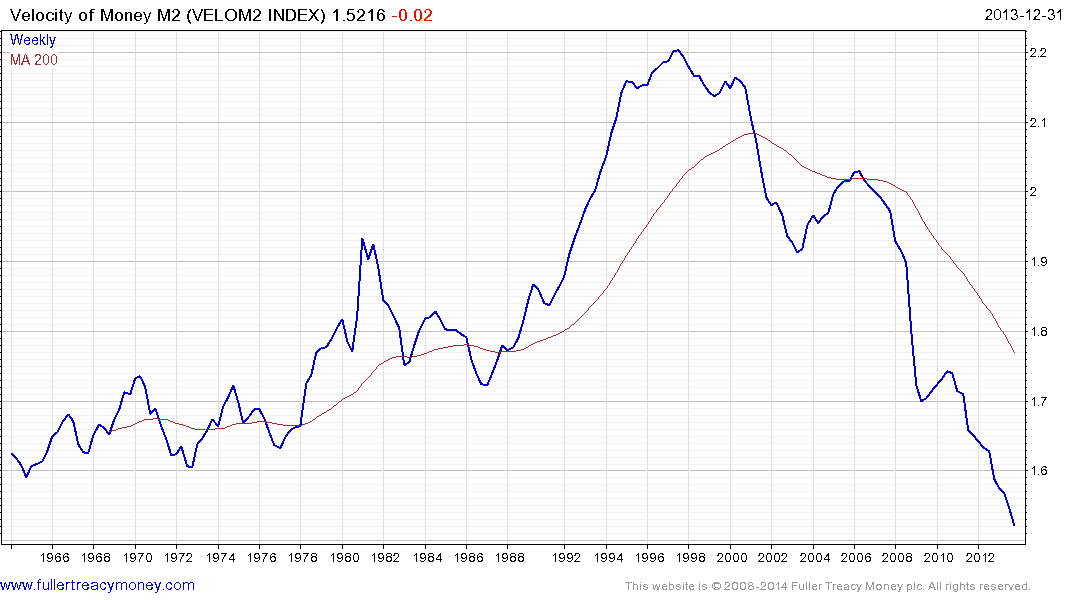 An additional consideration I have not seen much discussion about is the role of the internet in the slowing velocity of money. The Velocity of M2 peaked in 1997 and has been trending lower since. Over the last 15 years the number of intermediaries between producers and consumers in a host of sectors has declined. Just think of how travel agents, record stores and book shops have disappeared. If the number of transactions between producer and the end consumer is declining and looks likely to continue to decline, the Fed has to add more money to the system in order to ensure liquid capital markets.

Following this argument to its conclusion we can see that bubbles have developed in the debt markets, not least as a result of extraordinary monetary policy. If they pop we can expect even more extraordinary monetary policy to cure them. This will almost certainly result in another bubble inflating. We can therefore understand how Larry Summers concluded in a speech to the IMF in November that “we may be an economy that needs bubbles just to achieve something near full employment “

If one assumes that the pace of the USA’s economic recovery will remain uneven with some sectors and demographics doing better than others, then the potential for rapid interest increases is low but the need for some normalisation of policy is becoming more convincing the farther we move from the nadir of the crisis. However as you highlight, the Fed’s balance sheet is likely to remain a potent policy tool for the foreseeable future. 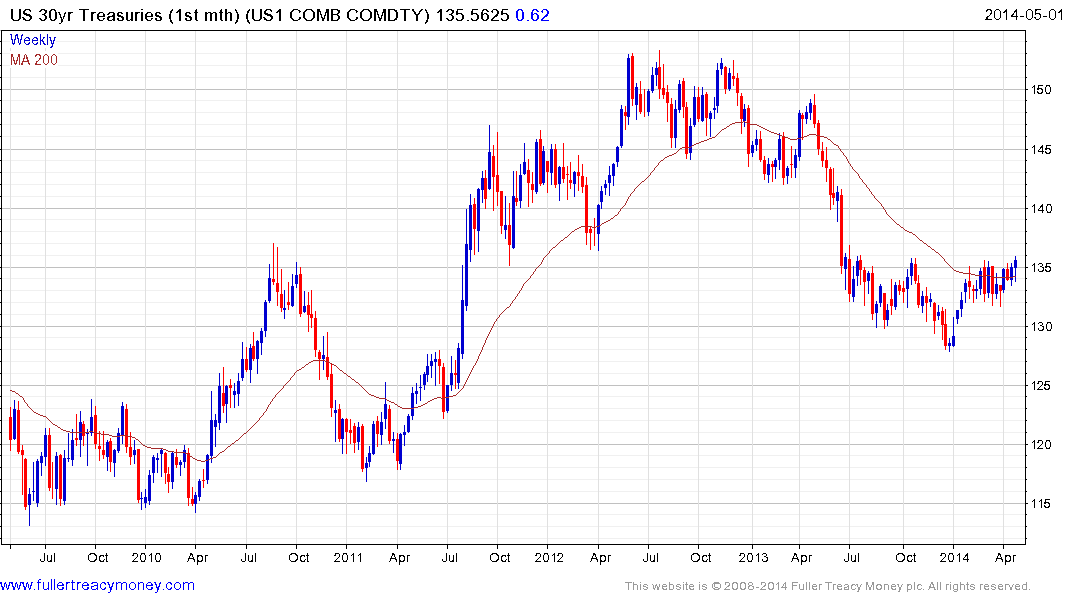 At present 30-year Treasury futures are testing the upper side of a 9-month range and a clear downward dynamic would be required to confirm resistance in this area. 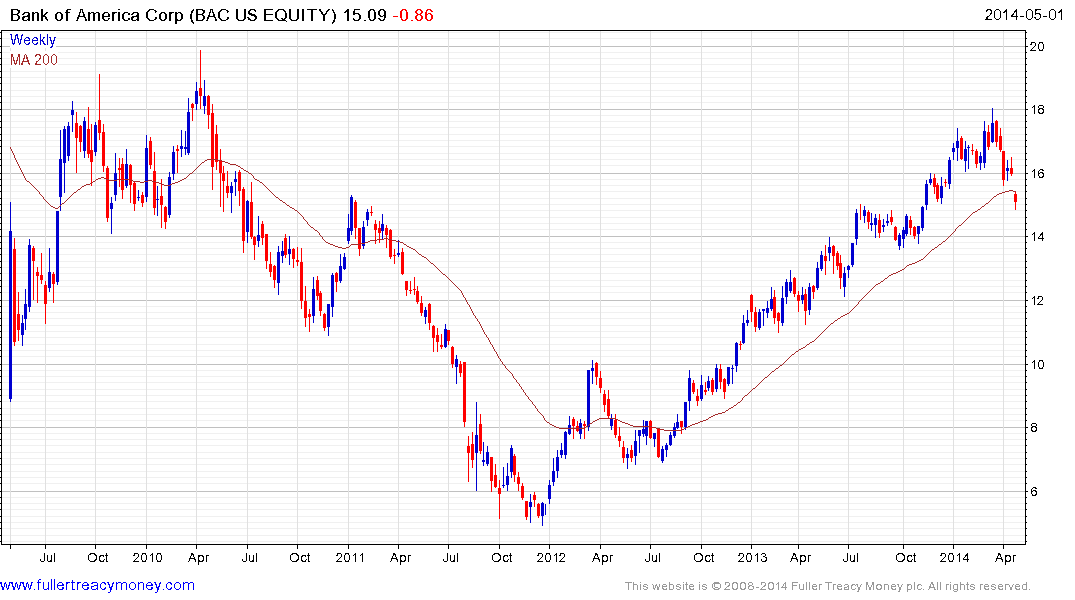 The issues with Bank of America’s capital reporting has seen the share pullback sharply to the region of the moving average. Meanwhile the wider S&P 500 Banking Index has also pulled back to the region of the 200-day MA. Generally speaking, the Index has held a consistent progression of higher reaction lows since 2009 and a sustained move below 200 would be required to question medium-term scope for additional upside. 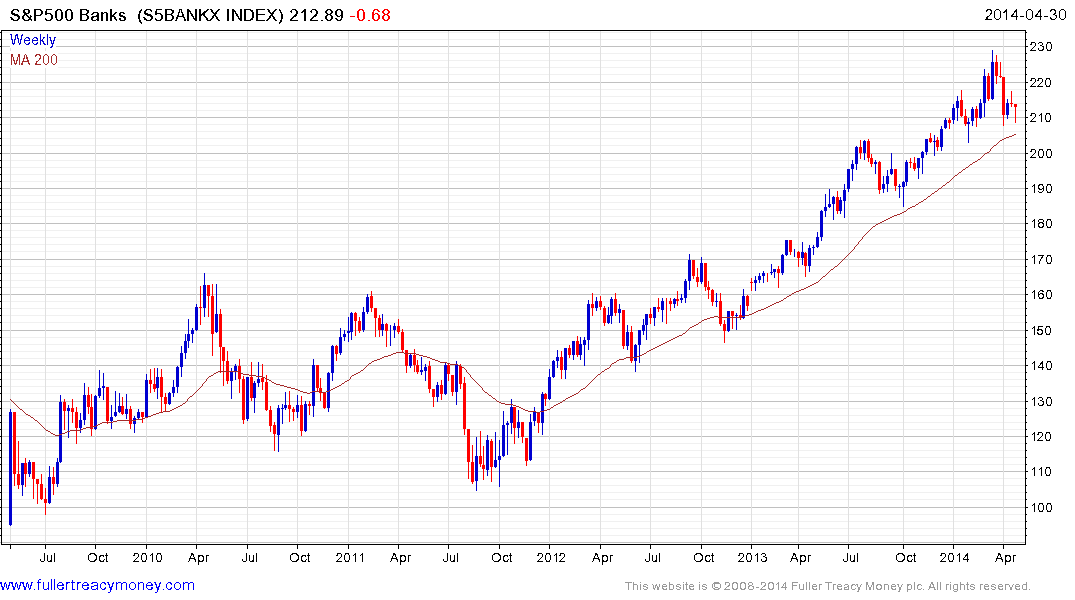