Email of the day on reliable dividend companies by Eoin Treacy

Your copy on global pay-out ride is coming back to earth is timely. The well-regarded fund manager Neil Woodford has given Imperial Brands a significant 8% asset allocation in his flagship income fund. Imperial pays a hefty dividend, growing at 10% rate. It generates good cash, but has huge BBB+ debt outstanding. It has come down quite a bit from its peak, but it’s valued at 17 times earning which may roll back to the 10 times earnings it had around 2000. Is there a case for holding Imperial Brands as primary source for dividends for the long run? I wonder if you could review some good dividend paying companies, net cash global companies with strong balance sheets, that will not get caught in the pending investment grade bond crunch. Thanks!

Thank you for this question which I’m sure is something a number of subscribers are pondering. More than half of all investment grade bonds are rated BBB and approximately $600 billion are up for refinancing this year. Against a background of tightening liquidity conditions that represents a risk some companies are going to have issues sourcing funding at the highly attractive rates which have been on offer for the last decade. 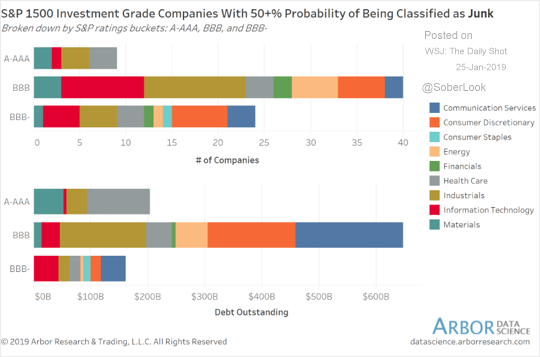 Imperial Brands has a debt to equity ratio of 207.9% which is representative of the debt financing it has been engaged in over the last decades as strong growth gave way to strong reliable cashflows. It’s debt to assets ratio is 38.9% which highlights the companies has plenty of resources to sustain that debt load. Even though it is rated BBB, its 5% 2019 sported negative yields for most of 2017 and 2018. 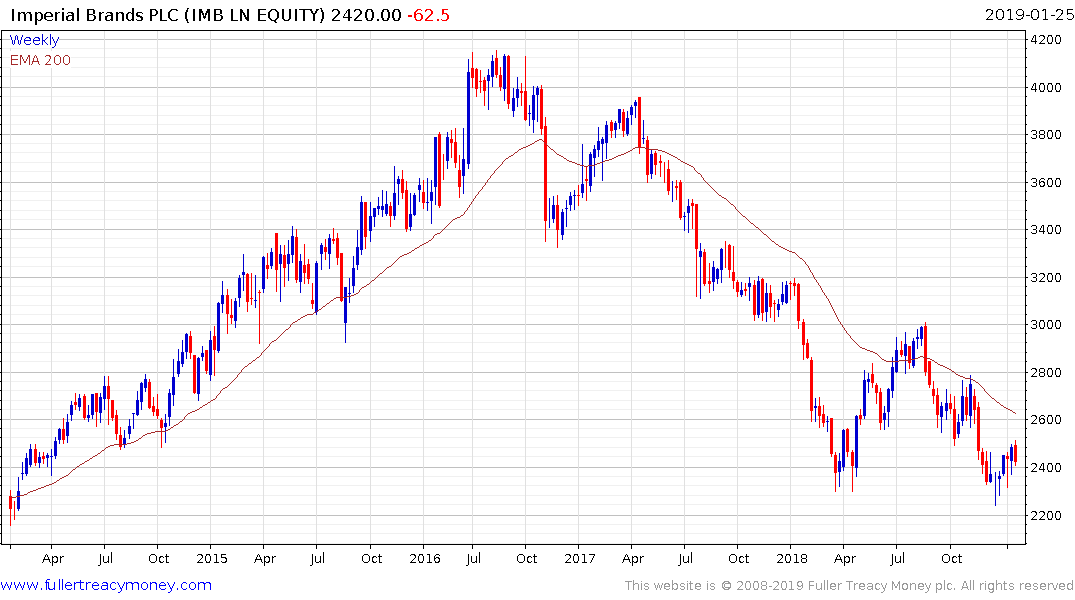 The much bigger issue for the company is how much of a threat does the move to e-cigarettes represents. Meanwhile the potential evolution of the cannabis sector represents a major growth opportunity for tobacco companies considering their scale, expertise in agriculture and production. 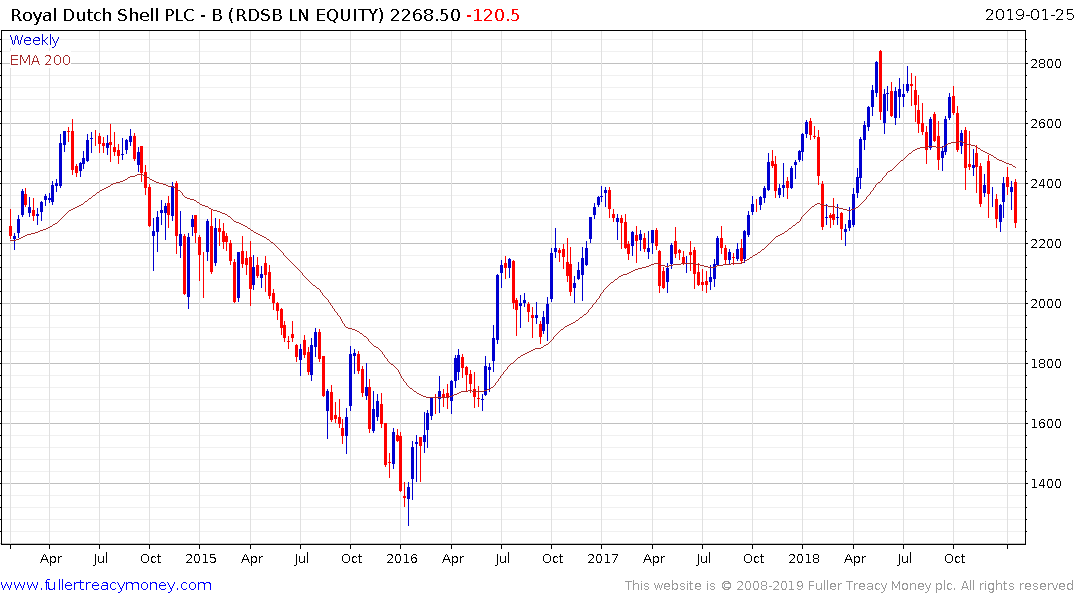 David’s position in Royal Dutch Shell was based on his belief in the growth of the global natural gas market and the company’s strong record of dividend growth. They reduced the dividend at the beginning of last year and started to increase it again from June. The share encountered resistance in the region of the trend mean at the beginning of the month and is now back testing its lows. It will need to bounce soon if support building is to be given the benefit of the doubt.

I created a filter on Bloomberg looking for companies with a market cap of more than $1 billion, total debt to total assets less than 50%, total debt to common equity of less, growing its dividend over 1 and 5 years, positive earnings and a P/E of less than 20. There were 428 results. Some of the highlights include: 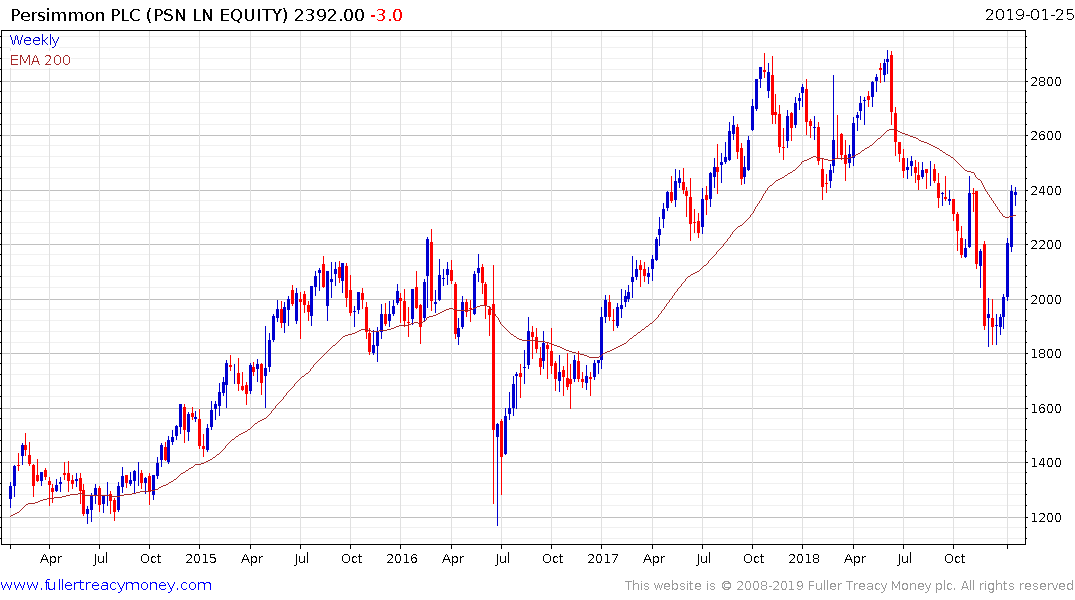 Persimmon has low debt and strong but volatile record of dividend increases. The share has rallied over the last three weeks to break its downtrend. 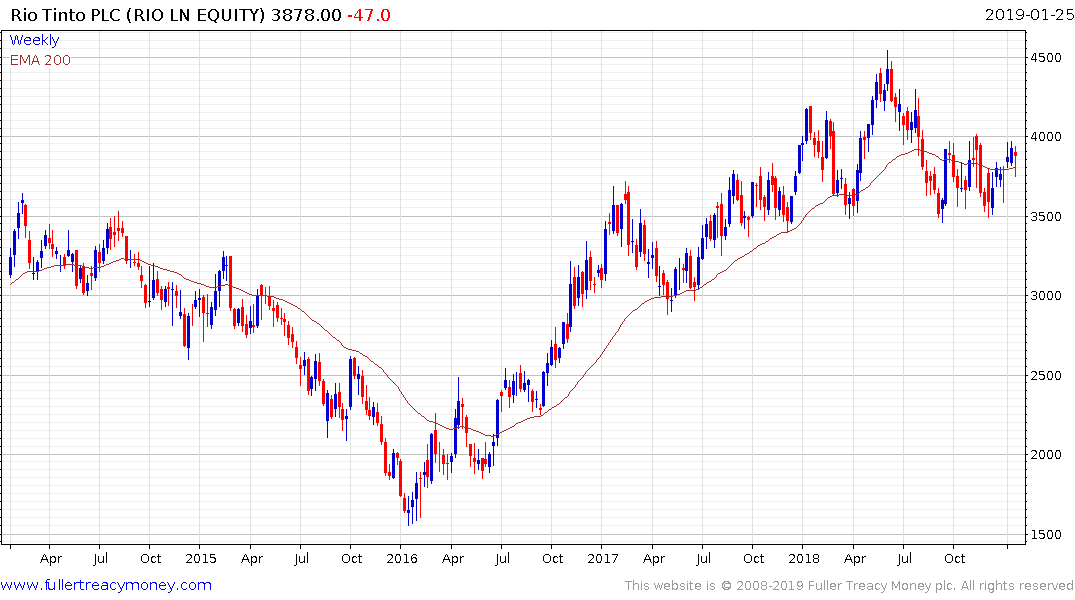 Rio Tinto yields 5.83% and returned to growing its dividend in 2016. The share has been consolidating above 3500p for nearly two years and a sustained move below that level would be required to question medium-term scope for continued upside. 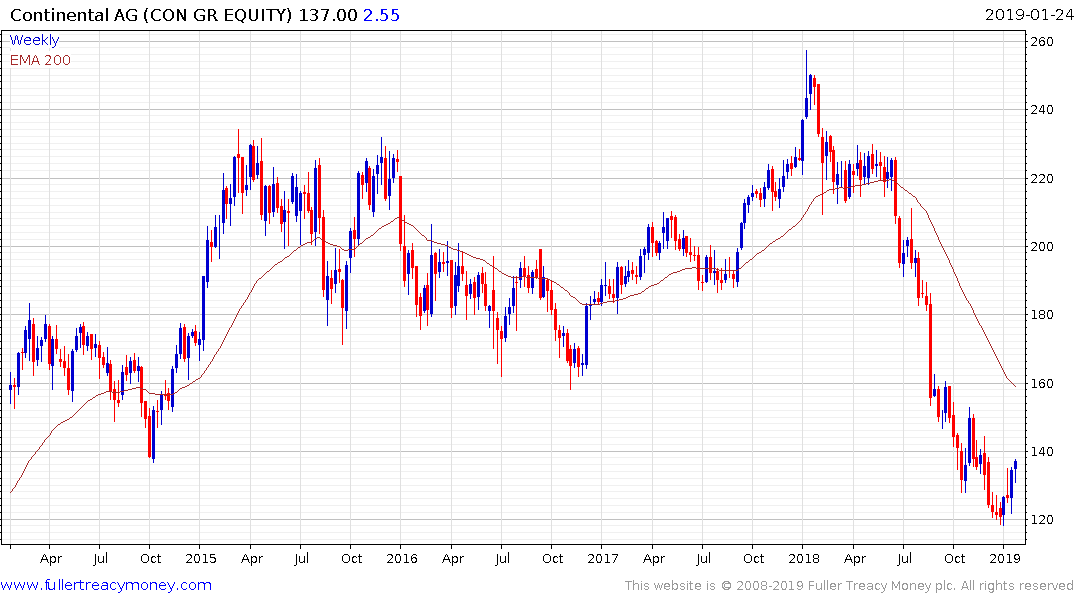 Continental AG has low debt and a strong position in the global tyre market. The share halved last year and it has rallied recently to break its sequence of lower rally highs in at least a reversion back towards the mean. It has a yield of 3.21% and a 12-month growth rate of 5.88%. 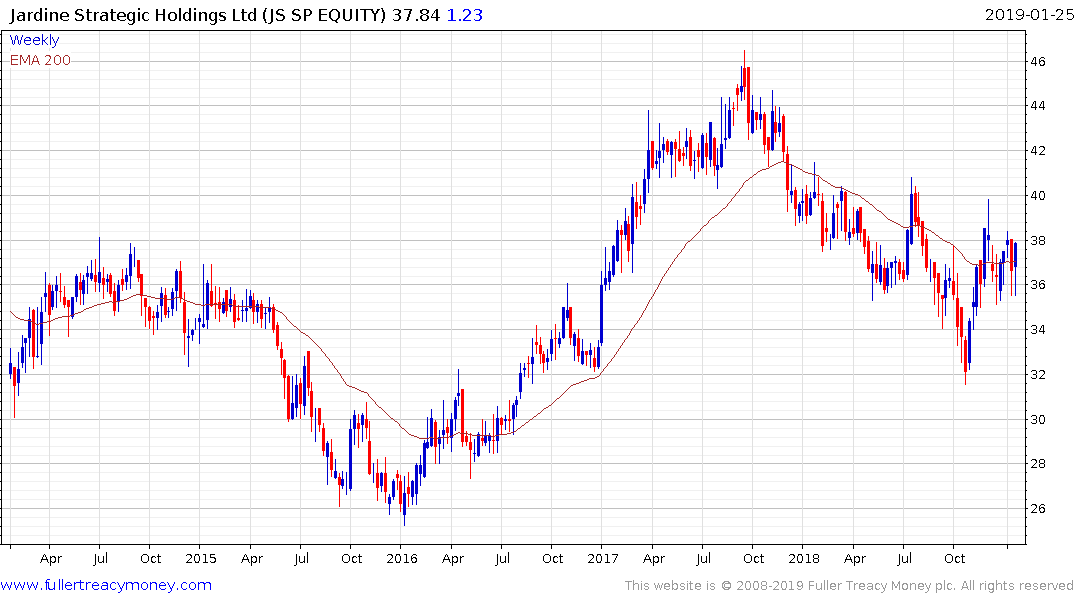 Jardine Strategic is a holding company for positions in some of ASEAN’s highest growth consumer companies and is trading on a price of book of 0.7 and price of sales of 0.7. It has a low yield of 0.86% but a strong dividend growth record. The share has rallied over the last month to break its downtrend. 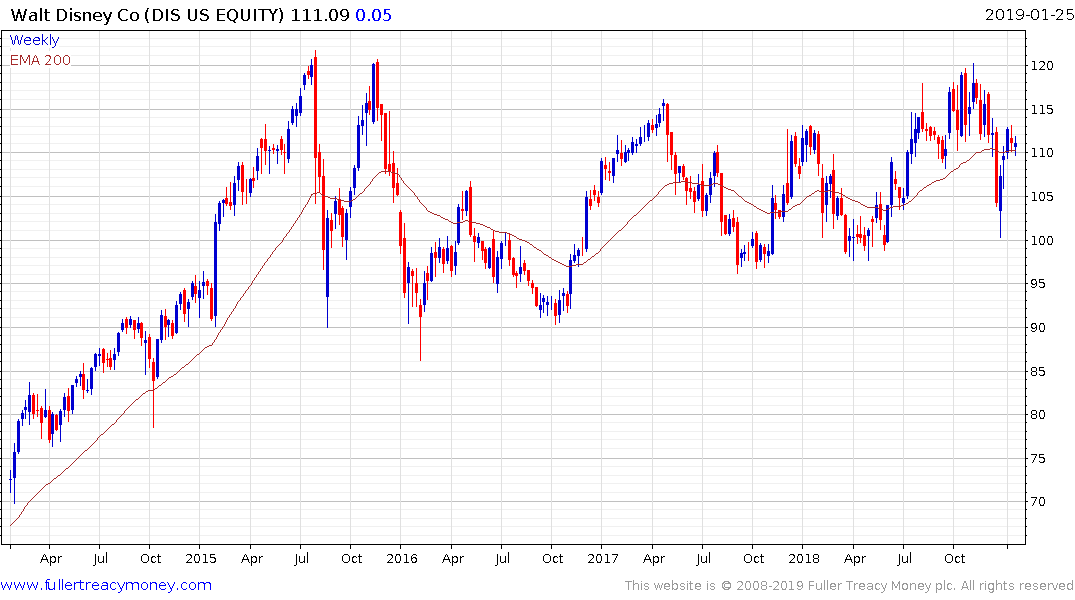 Disney has been on a buying spree over the last few years and that has caused congestion in terms of the share’s advance. Nevertheless, it is coming out the other end of this process with some of the most attractive brands in entertainment and has a solid record of dividend growth but only yields 1.55%. 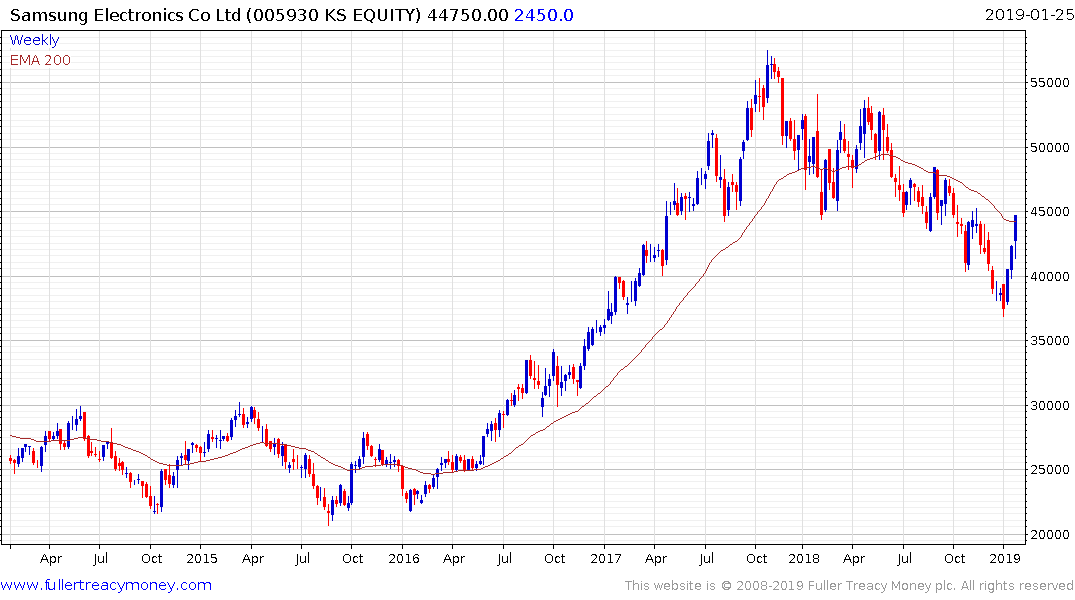 Samsung raised its dividend aggressively in the 12 months to September and then cut it. It is currently yield about 2.37% but on just about every other metric is objectively cheap. The share is now pressuring the region of the trend mean.

I think it would be remiss of me not to mention that there are a substantial number of technology companies which neither pay a dividend nor have any debt. Tech companies like Microsoft, Intel or IBM, for example, usually require some form of crisis to force them to pay a dividend, but when they start, they are among the most reliable dividend growth companies. 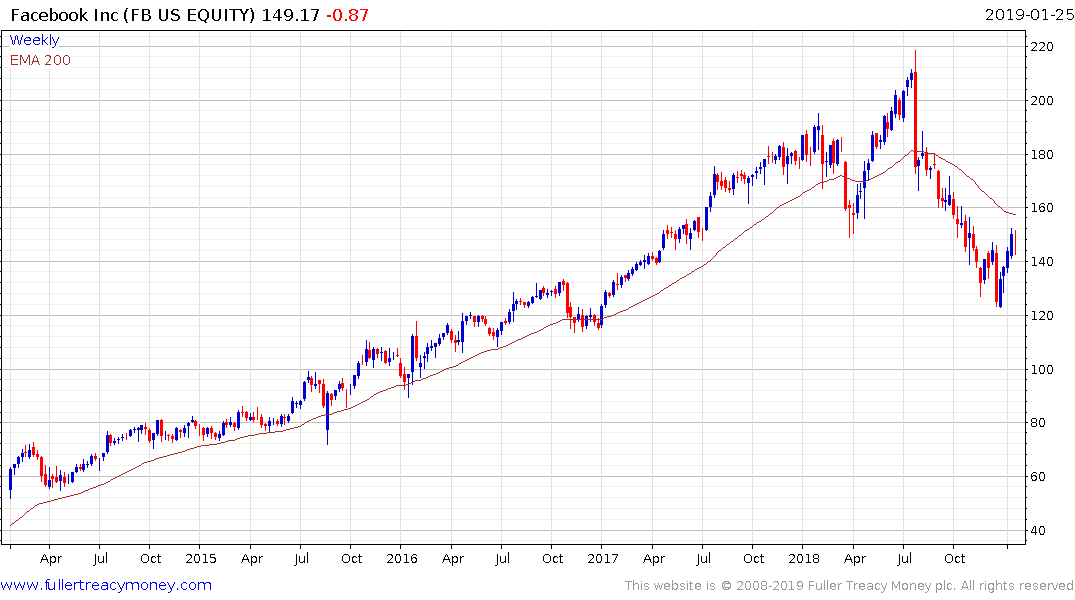 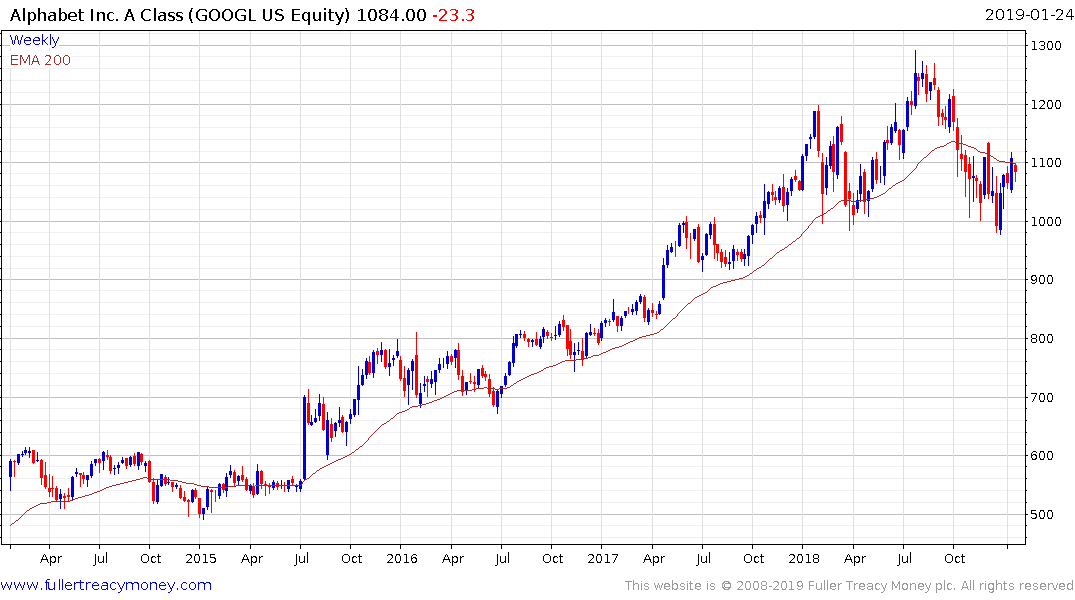 Alphabet/Google is testing the upper side of its range and the region of the trend mean.