Email of the day on overextensions and rotation by Eoin Treacy

Thank you again for your excellent commentaries.

In the middle of last week you referred to a number of stocks that had risen more than 30% and were now well above their 200 MA while there were others still trading well below that mark.  Would it be possible to list some of those in the latter category which investors could examine in more detail?

Thank you for your kind words. Any corrective phase results in rotation as momentum leaders that may have been frothy before the decline struggle to regain impetus while bargain hunters begin to take fresh looks at the most beaten down of sectors where short sellers will have placed stops to preserve profits. This sets up opportunities provided we are willing to match our behaviour to the reality provided by the market.

Here is a spreadsheet of the S&P500’s constituents ranked by overextensions relative to the trend mean. 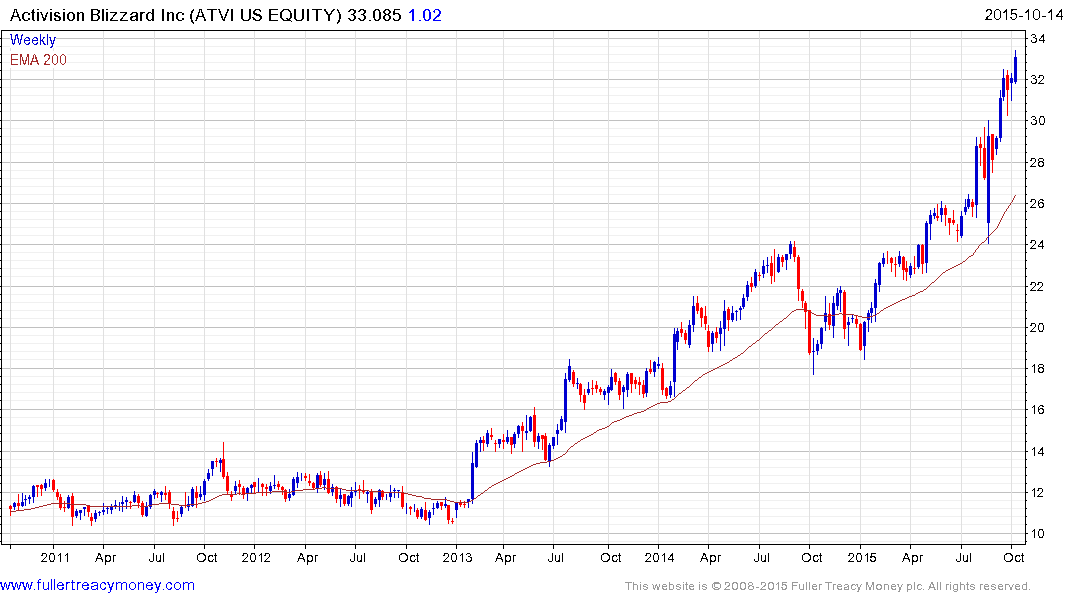 Activision Blizzard is one of the original cast of Autonomies and has gone from strength to strength with each successful expansion of its game franchise. However, the share is now accelerating higher and is currently more than 33% above the trend mean. For someone who owns the stock a trailing stop on at least part of the position would be appropriate at this stage. For someone on the sidelines considering buying, it would have to be in the full knowledge that the price could easily fall 30% and still be in a medium-term uptrend. 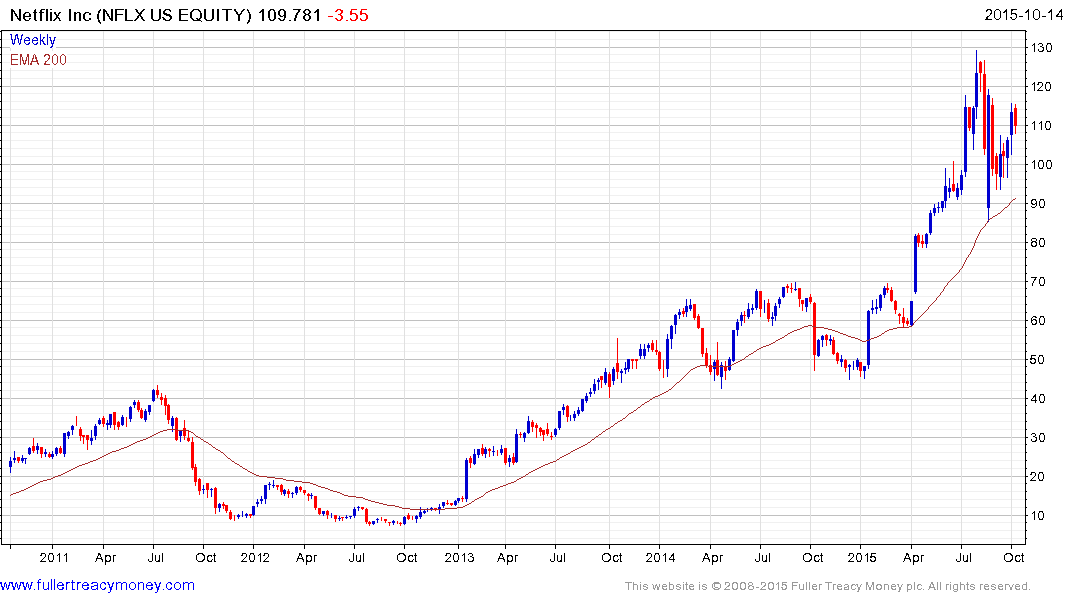 Netflix is trading on an Estimated P/E of 479 so there is very little room for disappointment in its earnings. The share experienced an incredibly swift pullback in late August and has bounced from the region of the 200-day MA over the last six weeks. International expansion is both expensive and fraught with difficulty. Some ranging which would allow valuations to contract somewhat would be welcome. 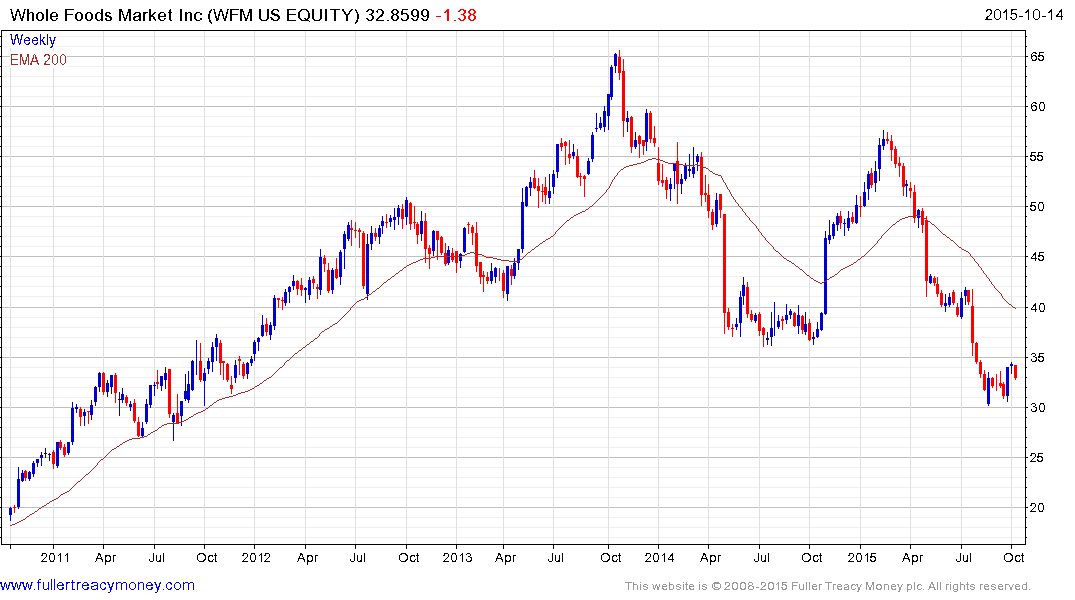 Whole Food Markets was among the most adored growth stocks ahead of its international expansion and has since halved in value. Valuations have come in from a heady 50 to a more competitive P/E of 19. The share is currently 25% below its trend mean and has at least stabilised in the region of $30. 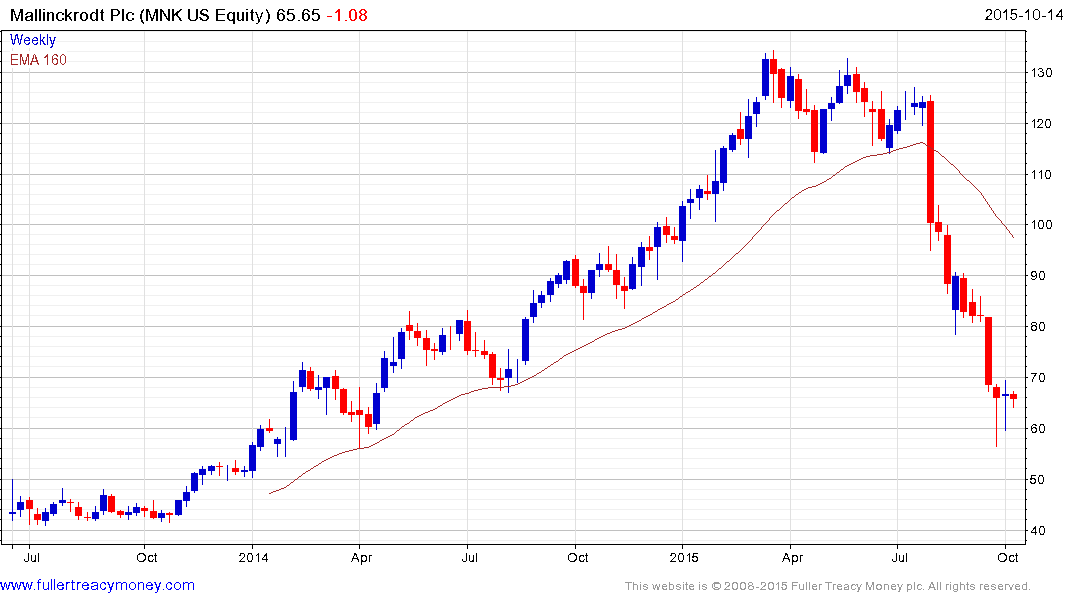 Mallinckrodt is in the pharmaceutical and diagnostic equipment sector. It does not pay a dividend but is trading on a forward P/E of 9 and is currently 40% overextended relative to the trend mean.
As you will see from the above spreadsheet the energy sector has by the far the most companies with extreme oversold conditions relative to their respective 200-day MAs. Some of the more overleveraged smaller companies are at risk of going bust the longer oil and gas prices remain low. 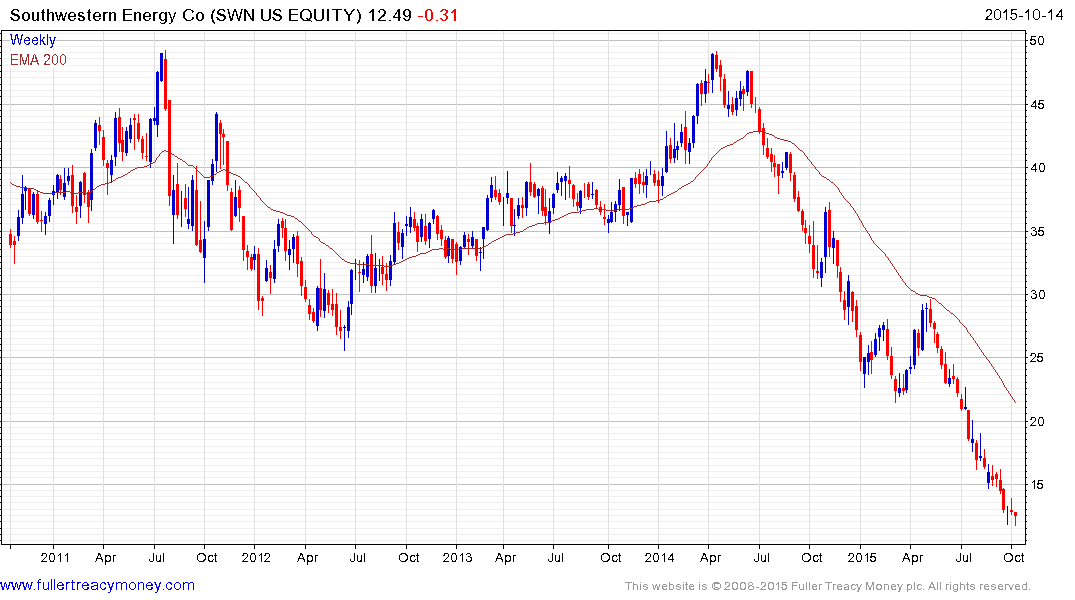 Southwestern for example is retesting its low and is nearly 44% oversold relative to the trend mean. A break in the six-month progression of lower rally highs would be required to ignite short covering. 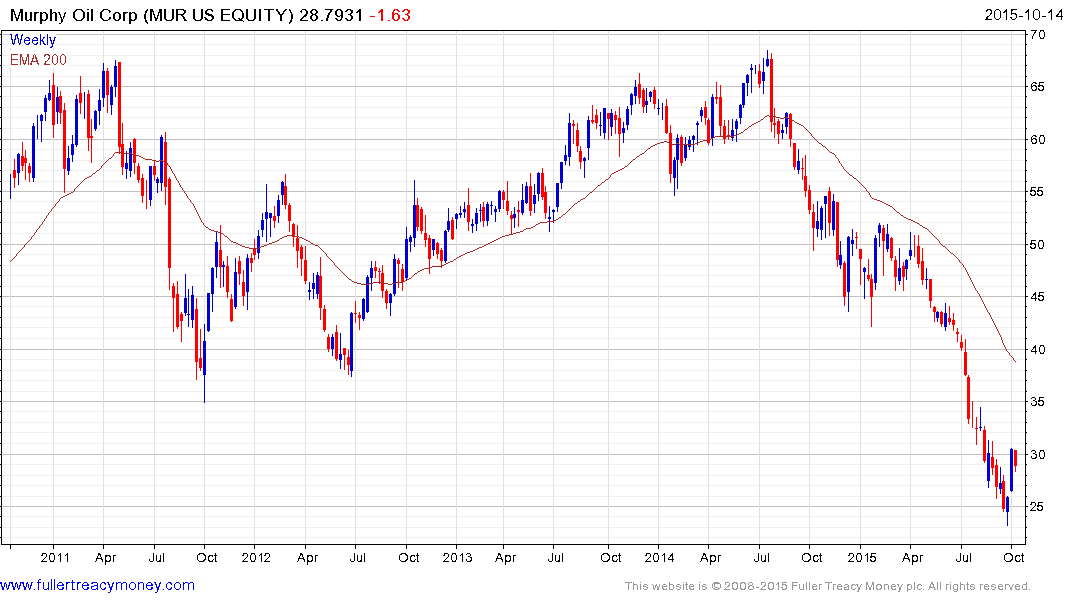 Murphy Oil rallied over the last two weeks to break the progression of lower rally highs and is now experiencing its first pullback. It will need to hold the $25 area to demonstrate demand returning to dominance at progressively higher levels and to suggest more than a short-term low.

Taking the performance of the above shares in aggregate we can only deal with the reality provided by the market. A share that is accelerating higher turns into a trader’s market because of the risk of a substantial drawdown once supply overwhelms demand. On the other hand, the perception of risk is highest following a downward acceleration because bad news is always associated with such moves. This is where investors with a somewhat longer-term time horizon benefit and a cost averaging approach works well assuming one is correct in identifying bottoming characteristics.