“interesting article. It's certainly is what I see in my company BG who are in cost cutting mode. Also as it is mentioned we are no longer going for volume but will develop assets that deliver $”

Thank you for this article by Allen Brooks’ for PPHB which appeared in Rigzone. Here is a link to the full edition of his Musings from the Oil Patch report dated March 18th.  Here is a section:

We were intrigued by the decision by Chevron to boost its oil price outlook from $79 a barrel for Brent crude oil to $110 per barrel. This move is designed to help the financial outlook for the company’s earnings and to offset the reduction in the production target. The oil price assumption is consistent with the average Brent price for the past three years, but it is at odds with the trajectory for prices derived from the futures market, which call for lower levels in the future. We wonder whether this price-target revision will rank with their statement about the future course for natural gas prices a few years ago when the major oil companies jumped on the shale gas bandwagon. Their timing essentially marked the top for gas prices as North American gas prices collapsed due to the surge in gas output. This would not be the first time major oil company planning departments incorrectly projected the course of global oil prices.

Strategy adjustments by major oil companies are seldom quickly reversed even when near-term industry trends suggest an adjustment should be made. If the newly defined financial discipline mantra demanded by investors is followed and industry capital spending is restrained, and possibly falls, there will be ramifications in the energy market. If Mr. Watson’s declaration, as echoed by other oil company CEOs, is true, then the cost of finding and developing new reserves is too high and the pressure to drive down oilfield service costs will grow more intense. We may now be witnessing the fallout from that discipline in the offshore drilling business where the expansion of the global rig fleet with more sophisticated and expensive rigs, necessitating higher day rates, is leading to near-term “producer indigestion.” Could the offshore drilling industry be on the precipice of a significant wave of older rig retirements in order to sustain demand for its new, expensive drilling rigs currently being delivered without contracts?

This service has long defined the peak oil argument in terms of the rising cost of marginal production. The demand growth story which has been such an important aspect of just about all commodity markets in the last decade has created conditions where producers were forced to invest in exploration, new technologies and other capital intensive projects.

The result is that the oil sector is prone to some of the same challenges as gold miners in that the marginal cost of extraction rose which had an impact on free cash flow. A process of rationalisation remains underway where oil companies are holding back from additional expenses and cancelling some of their more expensive plans in order to improve the perceptions of their financial health.
The Vanguard Energy ETF continues to hold a progression of higher reaction lows and a sustained move below the 200-day MA would be required to question medium-term scope for continued upside. 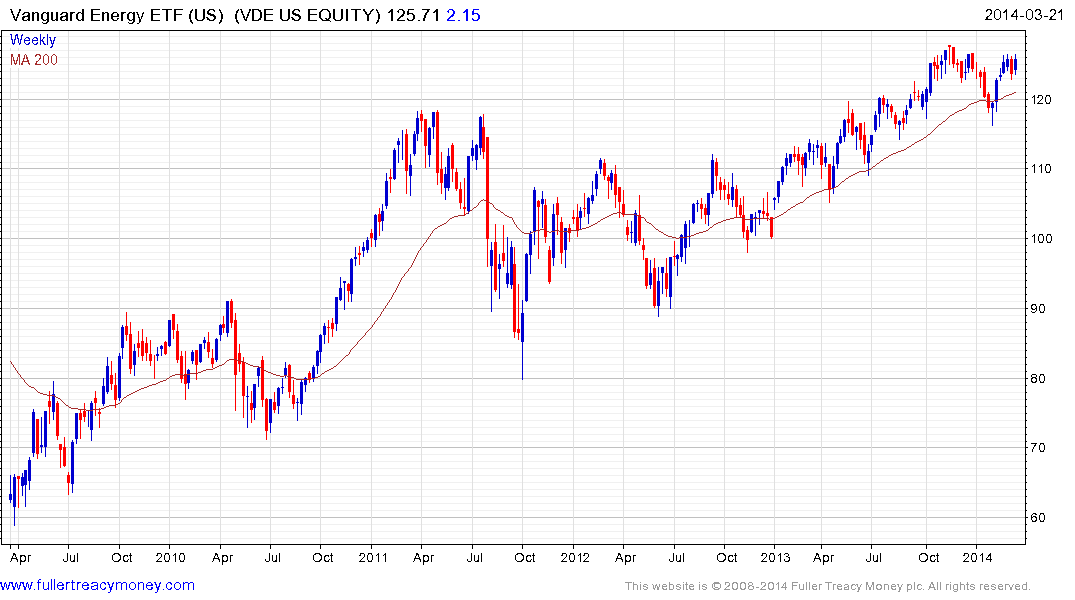 Meanwhile a reluctance to invest in additional production capacity suggests the major producers will have difficulty increasing supply if required. Brent Crude oil has returned to test the $105 area over the last month and firmed from that level this week. From a medium-term perspective the amplitude of the three-year range has been decreasing to create a triangular pattern suggesting that an eventual breakout, in either direction, is likely to be powerful. 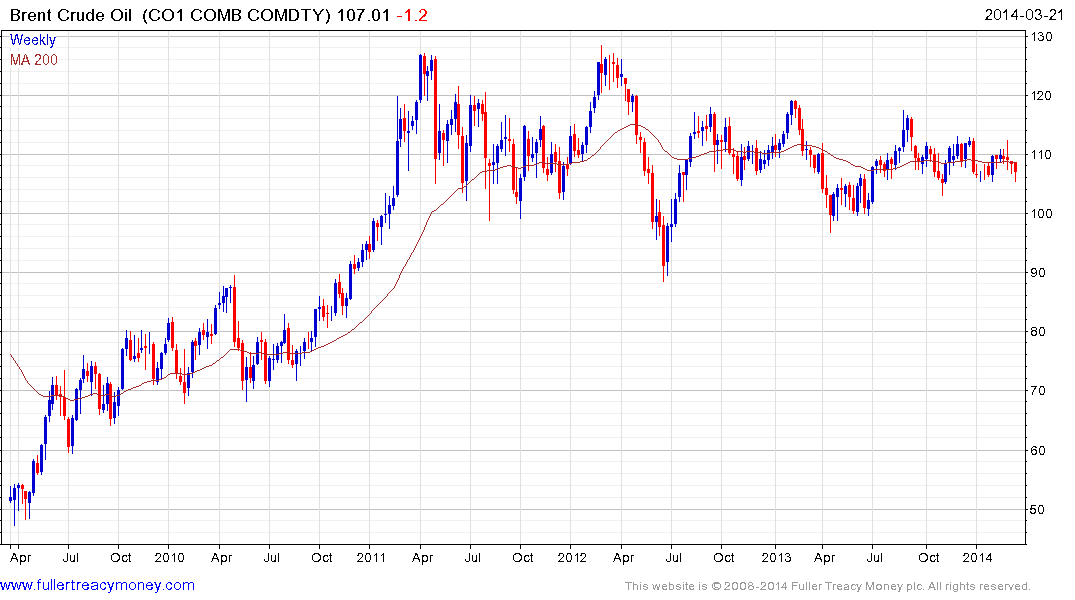 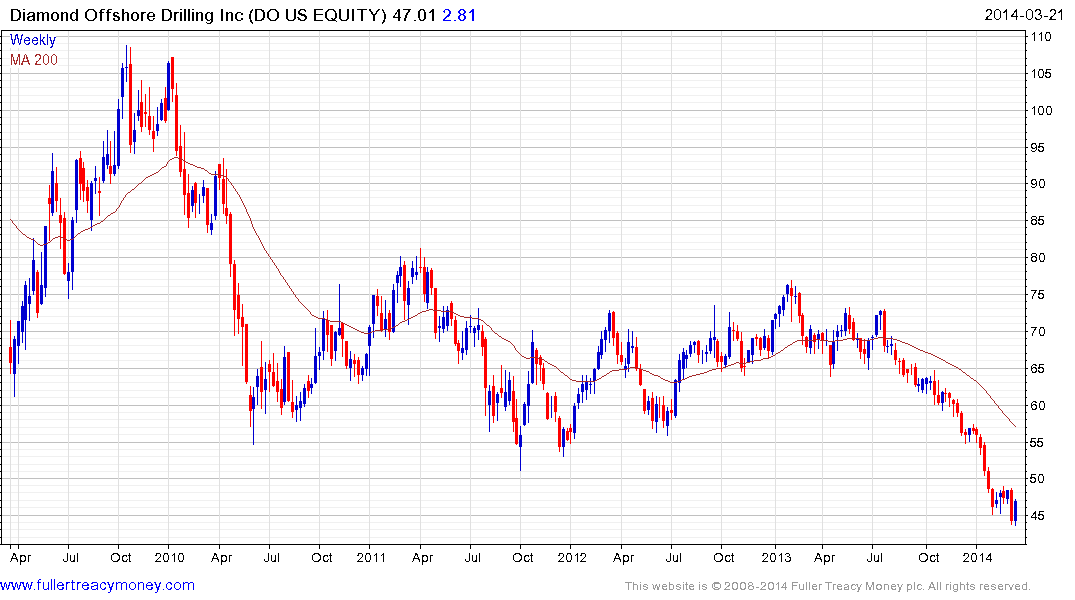 Regarding the offshore drilling sector, companies such as Diamond Offshore Drilling will certainly need to figure out how to improve the perception of their future potential among investors. The share found at least short-term support in the region of the 2009 lows over the last week and a sustained move below $43 would now be required to question potential for a reversionary rally.
At the other end of the performance spectrum Helmerich & Payne is accelerating higher and the first clear downward dynamic is likely to signal a peak of medium-term significance. 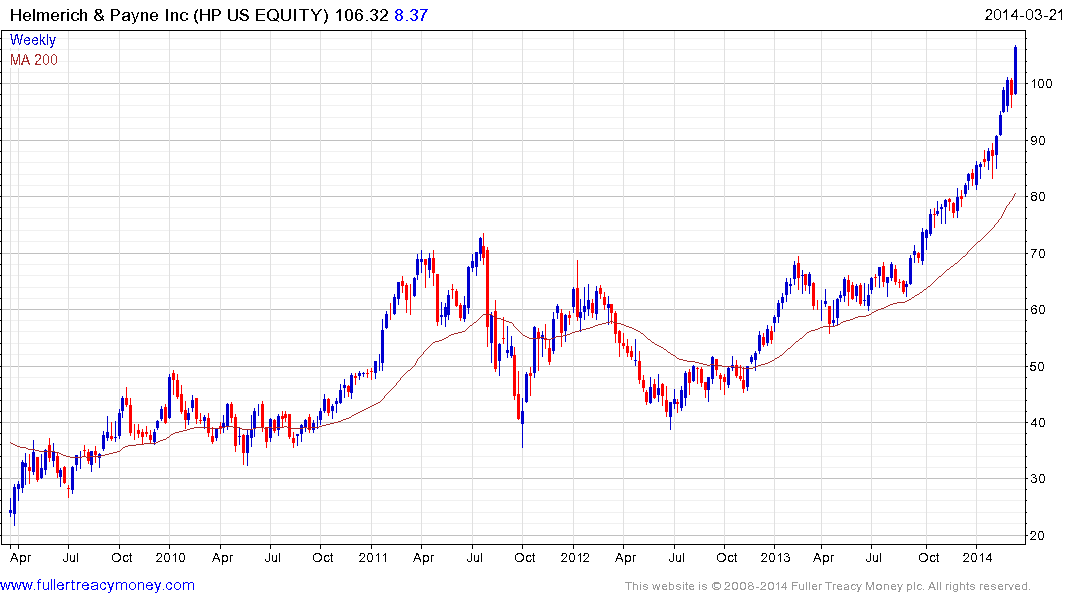