You periodically remind us of some of David’s good advice, such as “Don’t fight The Fed”.   The Gold Hub recently reported that central banks around the world were net sellers of gold in Q3. (See attached chart.)  It is easy to see why these institutions want to discourage gold investors.  Are we fighting not only the Fed but every other government in the world?

Thank you for this question. Gold has been in a corrective phase since late August and sentiment has seen a significant reversal. If we remember only a few months ago investors were revelling in the idea that gold was the only asset worth owning. Today there is a lot of questioning about whether it worth owning at all.

The recent World Gold Council report included the above graphic but also explained that the net sales were fuelled by Turkey and Uzbekistan while there were a handful of central bank purchases in excess of a 1 tonne. Here is a section:

Turkey reduced gold reserves by 22.3t during the quarter, the first quarterly decline since Q4 2018. Turkey has a range of gold policy tools which can affect the level of official reserves, especially at times of greater demand.8 Higher domestic gold demand in August and September led to heightened gold trading activity between commercial banks and the central bank, resulting in this decline. But on a y-t-d basis, the country remains the biggest gold buyer, adding 148.7t. Its official gold holdings now amount to 561t and 47% of total reserves. In August, Hasan Yucel, the head of Turkey’s Gold Miners Association, indicated that national gold production was expected to increase by 44% this year. He also stated that since 2017 the central bank has been the sole buyer of all domestic output and that will likely continue this year.

Uzbekistan reduced its gold reserves by 34.9t during Q3, bringing y-t-d net sales to 28.6t. Despite the sizable sale in Q3, gold reserves of 307t still account for 56% of total reserves. The country has seen a rise in gold exports this year as it looks to utilise its gold reserves, capitalising on higher prices to combat the economic impact of the pandemic.10 Tajikistan (9.2t), Philippines (7.8t), Mongolia (2.4t), and Russia (1.2t) were the other notable sellers during the quarter.

A four-month correction will inevitably result in some profit taking. The fact the sentiment is now bearish on gold and that we have already seen a substantial reaction suggests to me at least that a lot of selling has already occurred. The price pulled back today from the region of the upper side of the overhead trading range and will need to hold the recent low to confirm support building in the region of the trend mean. 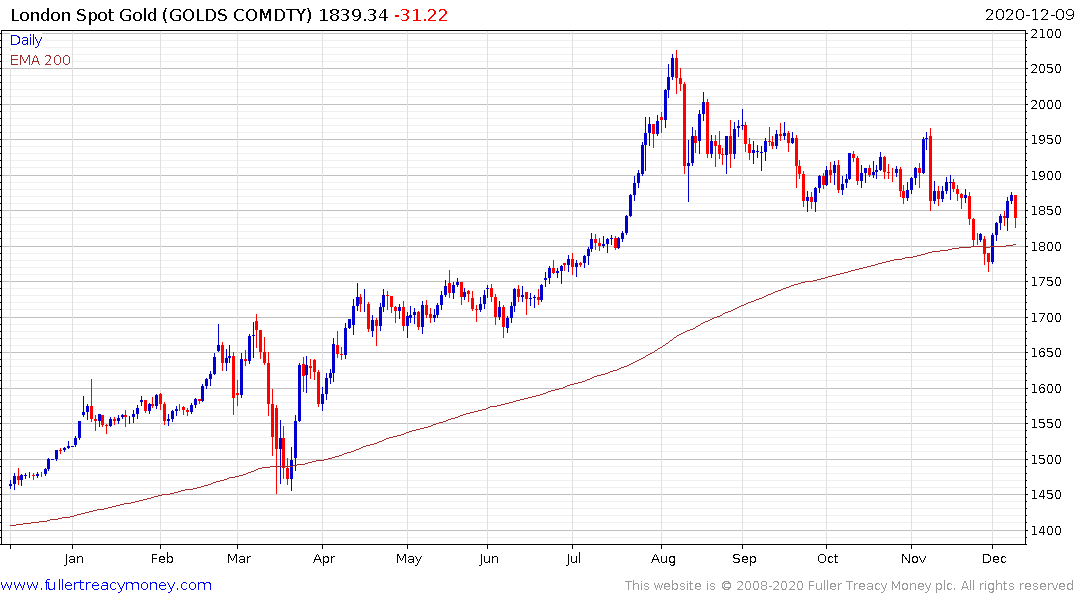 Even with the recent weakness, I have been trying to come up a rationale for what might deter governments from additional spending and stimulus. Perhaps the Republicans decide they are going to completely sabotage Joe Biden’s presidency and never agree to further stimulus. I just don’t see that as likely. Republican voters are just as unemployed as Democrat voters and are in need of assistance. Meanwhile, the deficits and unfunded liabilities remain looming capital-hungry problems that will need additional commitments.