Email of the day on negative interest rates by Eoin Treacy

​In November, the brokerage indicated it had to start charging 0.2% for cash held in Euros, due to negative interest rates in Europe. By Jan, this had increased to 0.5% (annual rate on average daily balance, paid monthly). Naturally any Euros in my account became dollars in November. I doubt I was the only one who did this.

The brokerage expects to begin charging for cash held in Yen shortly.

Some depositors are being hit by NIRP.

Thank you for sharing your experience. I suspect that in order to pay interest on your deposits your brokerage is purchasing short-dated paper and since this has a negative yield you end up paying for it. Negative yields rather than negative rates at the deposit window are likely to blame I suspect but I would welcome additional feedback from subscribers.

I checked the websites of a number of European banks and I can’t see any evidence of negative deposit rates being paid but I would welcome additional feedback from subscribers. Sweden was the first country to introduce negative rates but Swedbank is still paying marginally positive interest rates. This suggests that while brokerage account holders might be victims of negative yields, bank deposit holders are still receiving rather than paying.

One the other hand there is plenty of evidence that banks have increased fees on customers. A number of new levies on services have been introduced including fees to hold accounts, fees for debit cards, fees to accept and send wire transfers etc.
I believe it is important to be very clear on the differences between negative bank lending rates, negative sovereign bond yields and deposit rates. There seems to be a lot of confusion because people associate the term deposit with the account they have at their bank. However when a central bank talks about changing the rate they lend at through the discount window it means the rate they are lending to banks at.

Basel III rules mean banks have to hold more Tier 1 capital. That reduces how much leverage they can take on. They have been lodging lower quality capital with central banks in return for sovereign bonds to boost those Tier 1 levels. You will also hear that that they have been posting “excess reserves” with central banks but it is often not entirely clear what that actually means or what the quality of those reserves is.

Let’s work through it. If banks receive negative rates for the assets they are posting as collateral with central banks they have to hold those assets themselves. That means suspect assets have to come back on to their balance sheets which makes banks look shaky. That has contributed to deterioration of banks shares. They now have more bad loans on their books and that means they do not have the capacity to lend. The actions of central banks in introducing negative lending rates cannot lead to credit growth without first tackling the monumental task of dealing with the bad loans problem. Unfortunately for Europe that means governments taking action in a concerted manner (cross holding necessitate this) and that continues to look unlikely.

Right now there are trillions of Euros, Yen and Swiss Francs in bonds with negative yields. This represents an issue for new buyers with mandates to generate income but has been wonderful for existing holders who have enjoyed a significant momentum move. Part of the reason yields moved negative is because of the pressure negative lending rates have had on the banking sector. This created a sharp momentum move and the bounce to date has been shallow. 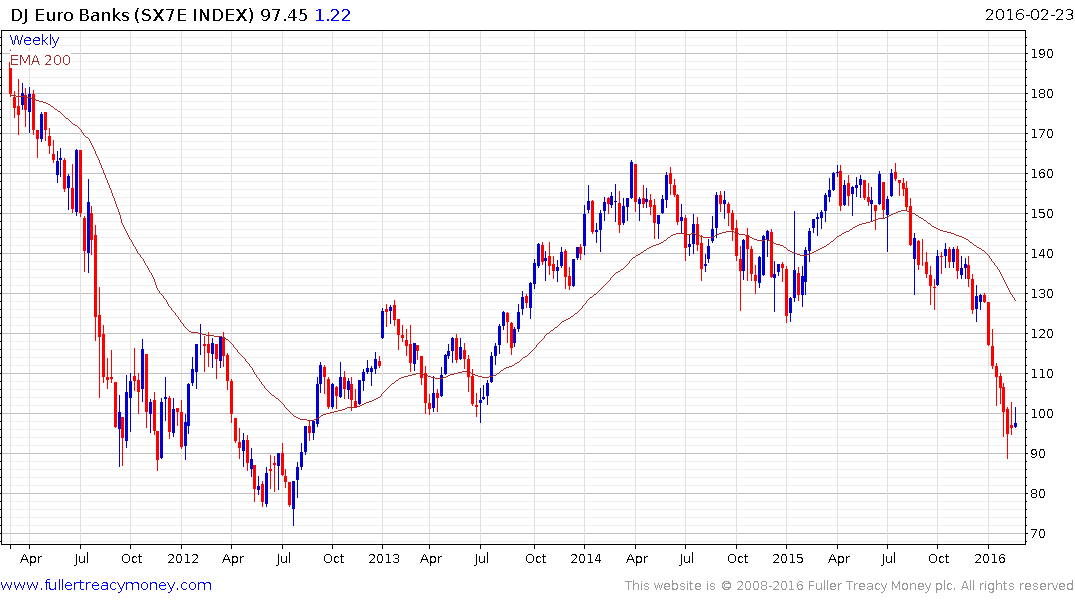 The commonality in the declines experienced by bank sector indices globally cannot simply be ignored. The introduction of negative lending rates by central banks is a major issue. Banks are one of the primary enablers of bull markets by providing liquidity. If that role is inhibited, as is currently the case, they represent a headwind for markets.