Something to ponder – we are 12 months on plus a bit from central banks going “all in”…..so YOY money supply growth is now actually slowing down quite markedly – for the Fed to cause a reacceleration they would now have to actually expand QE , which is obviously the opposite of their intention. So perhaps equities may start to struggle and with the Fed implicitly tightening (by not increasing asset purchases on a larger monetary base) the dollar starts to perform better and does not need higher treasury yields to do so?- though a peaking of inflationary expectations in the US would also imply real rates may rise too?. Perhaps this is what the gold price is telling us? and the better performance of growth and consumer staples versus value?

Michael Howell of Cross Border Capital always had a nice line in presentations …..”what makes equities go up ?” , someone says “fundamentals” and he smiles and says ……”money”…… it may be seasonal but it feels like liquidity conditions are peaking out? a stronger USD would hardly be helpful either……

Good luck to all in markets….

Thank you for this thought-provoking email. It is true that year over year money supply growth is contracting. There was no way money could continue to grow at such a prodigious rate compared to the 2nd quarter of 2020.

Month over month money supply growth is still rising at around 16%. That range (between 9% and 16%) has been held for the last eight months and is faster than at any time other than a crisis in the last couple of decades.

As a result, financial conditions continue to ease and remain close to the easiest levels in history. That’s a good reason for the continued resilience of uptrends around the world. 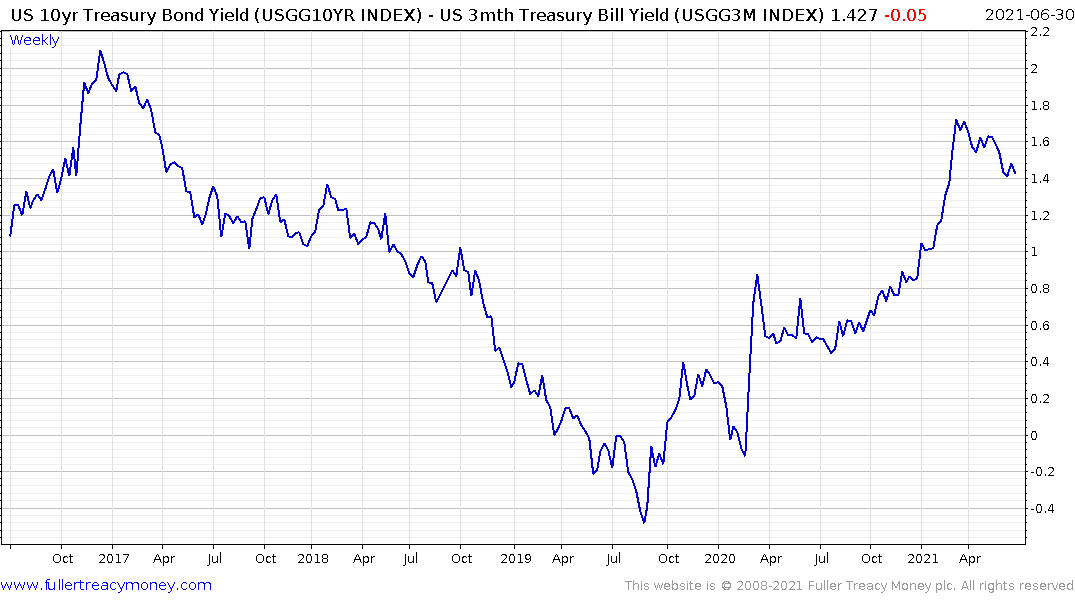 I was worried about the impact a widening yield curve spread would have on high growth companies at the beginning of the year. All it resulted in was a wobble. The reason it did not turn into a rout is because the yield curve spread peaked in March and continues to compress.

The normal course of events is the Fed cuts interest rates aggressively in response to a recession and the spread widens to about 300 basis points. On this occasion, the short end of the curve had nowhere to go, so the widening was primarily driven by yields backing up at the long end of the curve. 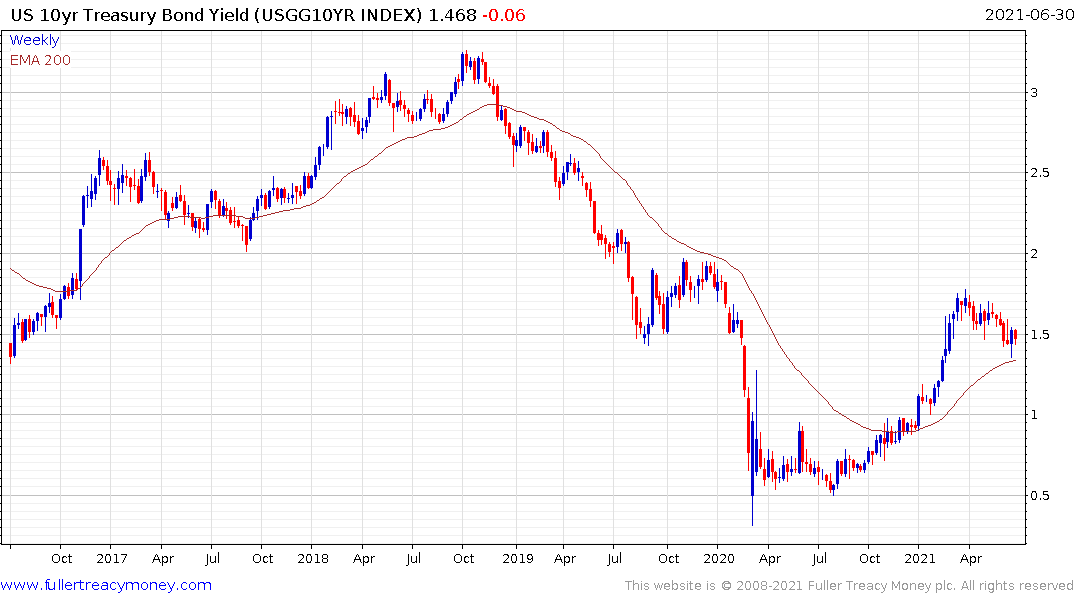 As Treasury yields compress it has created a polarisation of flows that favour growth and technology. We see those flows reverse in a lockstep manner whenever yields expand on a day-to-day basis. Nevertheless, as long as the yield curve spread is compressing that favours growth over value.

Money growth is still brisk but other regions are printing money quicker. At the same time the USA is further ahead in its vaccination program than other regions. Both factors are favouring the Dollar in the short term. 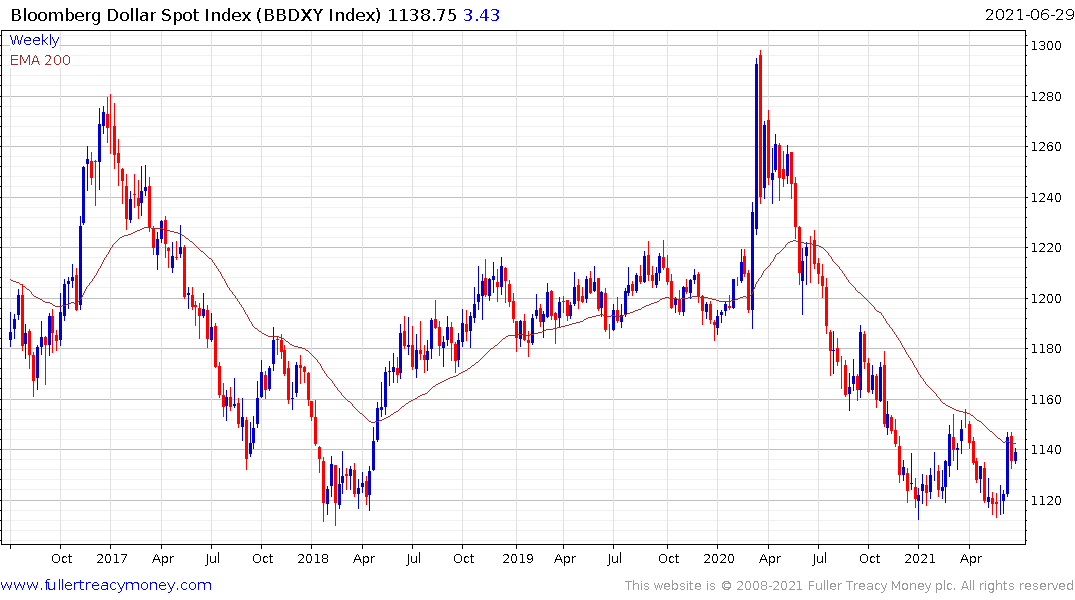 The Bloomberg Dollar Index is firming from the region of the trend mean and the benefit of the doubt can be given to the upside in the absence of a clear downward dynamic. 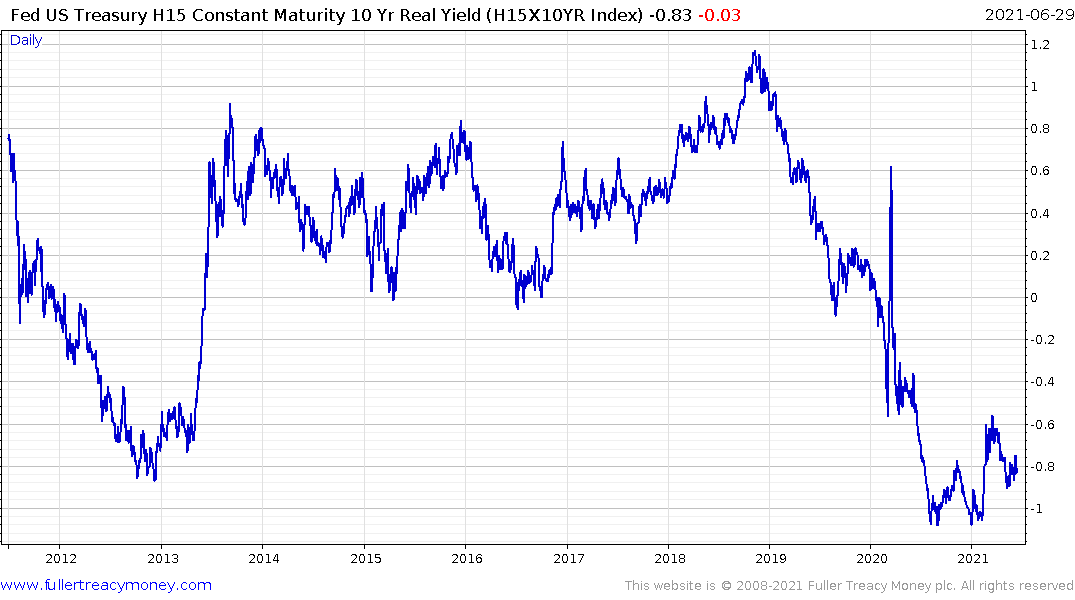 The Federal Reserve US Treasury H15 Constant Maturity 10 Yr Real Yield Curve Rates chart bottomed in August around the same time that gold peaked. It has not rallied in a significant manner but it does not look like it is about to drop to new lows either. That’s confirms your suspicion real yields are more likely to rise than fall in the near term. 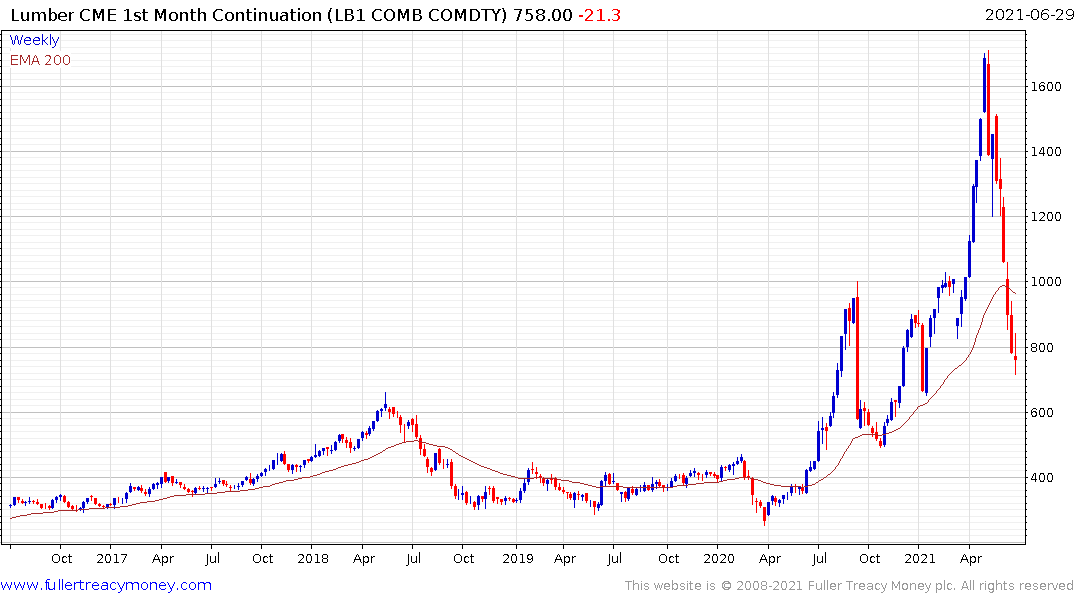 Inflationary expectations are at an important juncture. The things people were worried about like lumber have reversed. That removes a major source of inflation in building and construction costs. The expiry of outsized benefits programs and the end of the moratoriums on evictions are also likely to act as a drag on inflationary pressures.

However, food prices are primed to make headlines over coming months. Global deficits spending is still running at around $1.84 trillion and energy prices are trending higher. The big question is going to be about how wage demand growth fares.

By talking about tapering, the fed has engineered a Dollar rally which also helps to mitigate inflationary pressures. That’s also creating demand for bonds, boosting enthusiasm that the recovery will be smooth but it has pressured gold. 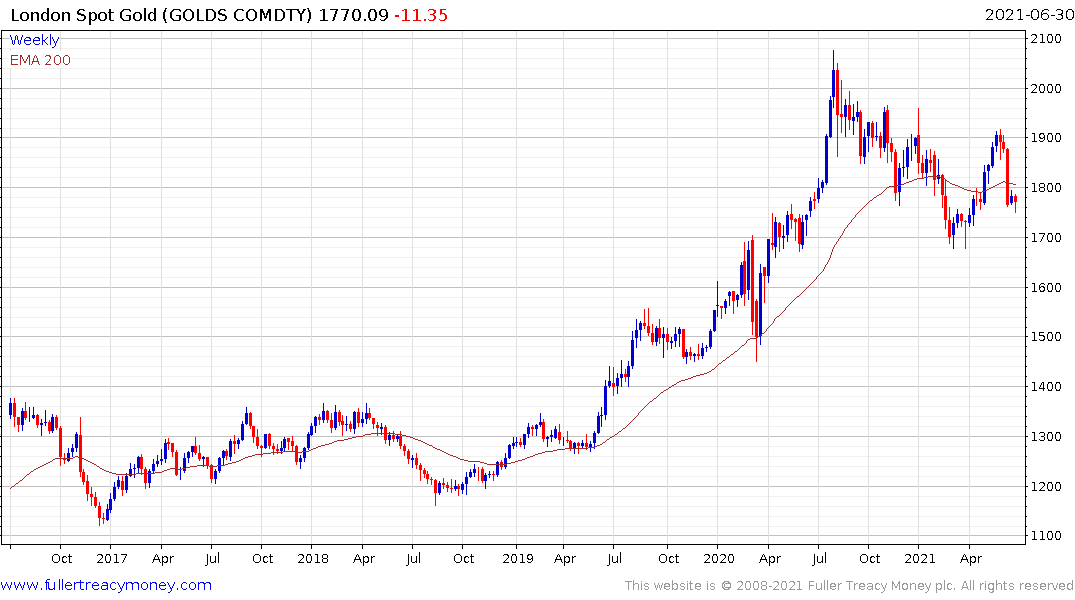 The status quo remains in place. There is no plan for addressing government deficits in the USA. Instead, there are calls to make the social programs permanent which is effective universal basic income. That does not look likely in the short term but is likely over the long term. The Fed is complicit in this program and will monetise the debt to facilitate drive to spend. That’s the reason to think of gold as a buy on the dips bull market. We’ve had a significant dip over the last ten months. I’m looking for evidence of a higher reaction low to confirm my intuition that the price has already bottomed. 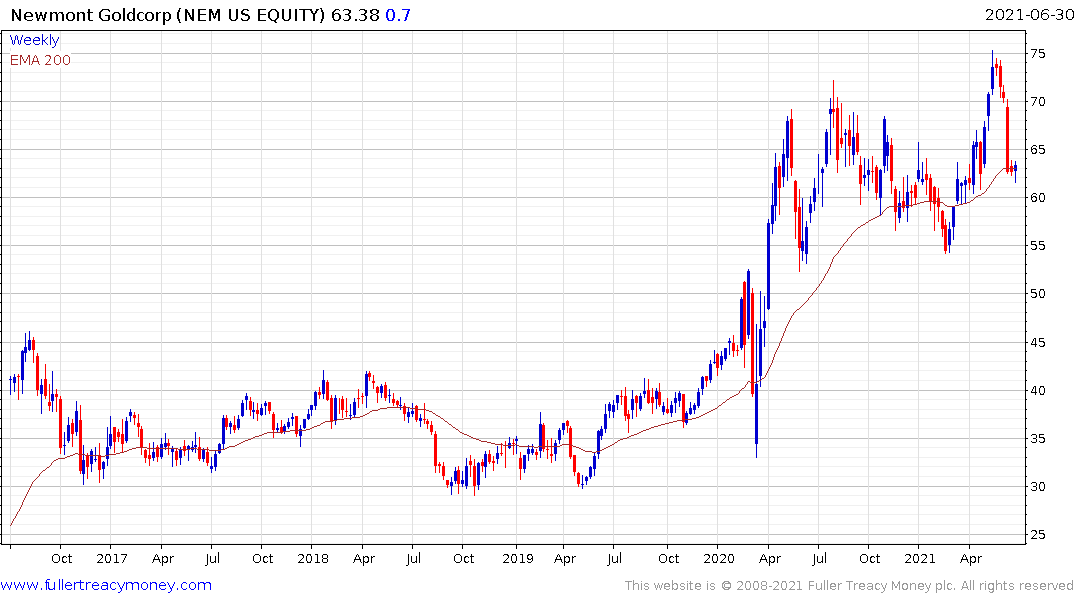 Newmont Ming grew its dividend by 161% last year and yields 2.76%. The share failed to sustain the breakout in May and has returned to test the region of the trend mean where there is not some evidence of steadying.

It’s true the Dollar can rally without yields rising. It’s also worth reminding ourselves that gold and Treasuries prices peaked in August within a day of each other. If Treasuries rally in a more meaningful manner, it should also act as a tailwind for gold.