Email of the day on Modern Monetary Theory by Eoin Treacy

Hope you are well in Dallas.

I have a question: why do you often mention that we have MMT in action right now?

MMT is not a policy adopted by government or central banks. They don’t “do mmt”

MMT is a theoretical framework that tries to explain how the monetary system works in a freely convertible and fiat currency system in which we have been living for 50 years now (and it explains it correctly to a large part in my opinion). it’s not the “policy ode making debt”. Isn’t it?

When you mention “MMT in action” you likely refer to the government demand for goods, services and the grant of subsidies / social securities payment / medicare /unemployment benefit to people etc. along with the debt issuance “to pay for” this spending. Finally the FED buying the government debt to “ease” the monetary conditions (the QE vs tapering).

But this is not “MMT”. Government spending has always existed and it is the second largest component of a country GDP (after “C” , private consumption). Look at the development of the US federal debt since the early 80es to the almost USD 28tn in 2021 / today. It does not matter who administered the country (super conservative or super liberal), they have all managed to expand the debt. And the market has always absorbed the “debt”. Have they been “doing MMT” for 40 years?

Thank you for your regular market updates... always appreciated

Thank you for this email which I believe will be of interest to the Collective. I agree there is nothing “modern” about MMT. Governments have a natural proclivity to spend and the freedom of fiat currencies inevitably leads to high debt loads. In that regard, the sustainability of debt regimes has been on a downward trajectory for a long time and people have been worrying about it for just as long. The bigger question is whether anything has really changed?

Simultaneous monetary and fiscal stimulus outside of an urgent crisis is new. Even as recently as the 2018, the Federal Reserve was willing to raise rates and reduce money supply to counteract the inflationary potential for the deficit spending resulting to the Trump tax cuts. Until the pandemic the EU was still holding to its fiscal austerity, tight budget mantra.

Today, even emerging markets are engaging in quantitative easing. Central banks are talking about tapering but one has to question to what extent that is possible. Total debt has exploded on the upside over the last eighteen months. At the same time, every government in the world has a plan for building back better following the pandemic. Restive populations are in no mood to tolerate higher taxes and social programs are coming under funding pressures.

MMT is synonymous with the belief governments can spend as much as they like, on whatever they wish for as long as the want. I think they really believe they can continue to borrow and spend indefinitely. They do not fear inflation because most people who lived through their adult life dealing with the last one are dead. So, the conclusion is governments are proceeding on the belief that the MMT format you outlined above is possible without consequences.

At the same time central banks have given up trying to predict inflation. That’s a profound psychological change for as long as it lasts. They have changed from overreacting to inflationary signals to underreacting. That virtually ensures inflation is going to take off.

It does not happen all at once but in fits and starts, which eventually form a trend. That’s what we are seeing in real time in the commodity markets. Lumber surged and collapsed, now palladium is doing the same. Natural gas is on the upswing now and will eventually collapse too. Meanwhile, the increasing cost of compliance, the regulatory burden and transportation costs are all pushing up prices. The most important point is the point where prices tend to settle is higher than before the pandemic. New floors have been set.

That’s also likely to be a feature of inflationary figures. CPI will contract on a year over year basis between now and Q2 2022 because of the bulge in price gains immediately after the worst of the pandemic panic. However, the rate of change will likely settle at a higher plateau once these lumpy data points are ironed out.

Inflation versus a cocktail of spending and money printing are incompatible trends. That’s where the belief in the MMT’s benign influence will be tested but not until inflationary pressures are clearly obvious to everyone as not “transitory”. 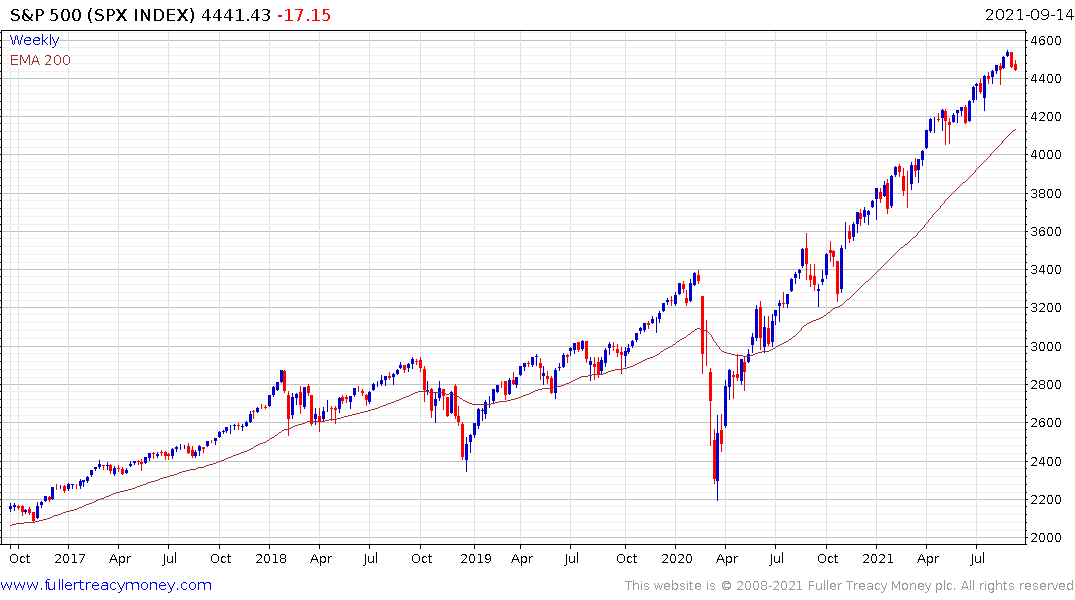 From a market’s perspective we can continue to give the benefit of the doubt to stock market uptrends despite short-term weakness and mean reversion risk. 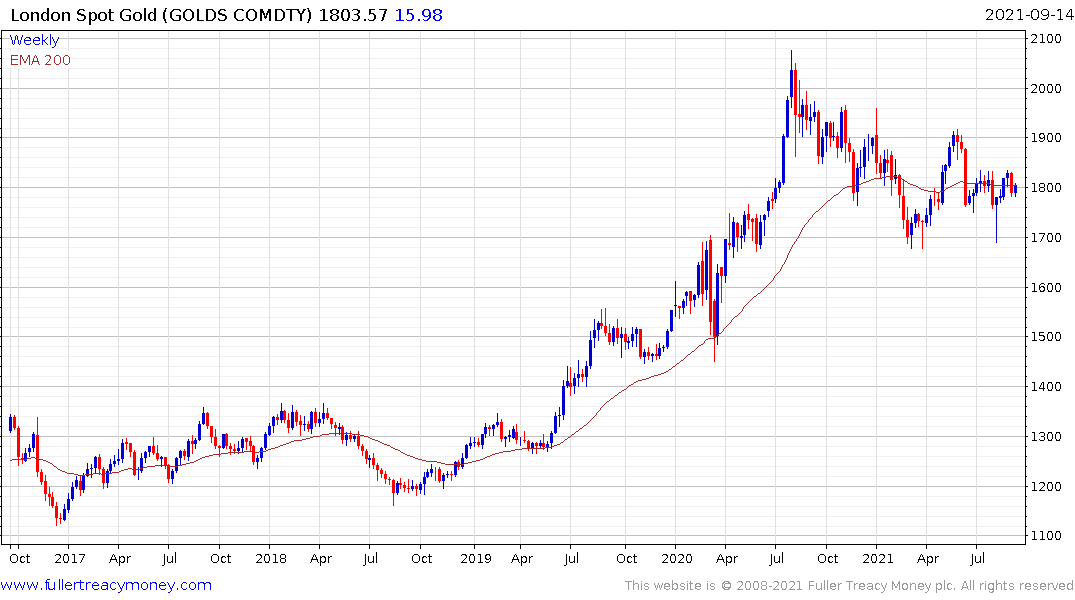 Gold is coming out the other side of its medium-term correction; albeit not nearly quickly enough to satisfy long suffering investors.

The mania in digital assets and nonfungible tokens is also likely to persist as long as the liquidity deluge persists.