Email of the day on Microsoft
Comment of the Day

Email of the day on Microsoft by Eoin Treacy

would be interested in your views of Microsoft's price chart at present. I know you have been cautious over the past few years, and have even questioned the presence of a catalyst as a reason to expect limited upside going forward. Yet, a reasonably consistent upward pattern continues to play out. As always, your insights and perspectives are genuinely appreciated.

Thank you for this question which may be of interest to subscribers. I was indeed cautious about the prospects for mega-caps in 2019 because we had an inverted yield curve, tightening liquidity and it was not apparent where the next big growth bump would come from.

The pandemic delivered both an outsized Y2K style surge of new demand for cloud infrastructure and massive liquidity infusions to fund speculation. That favoured the big tech companies more than any one else and acted as a significant catalyst for additional investor interest. 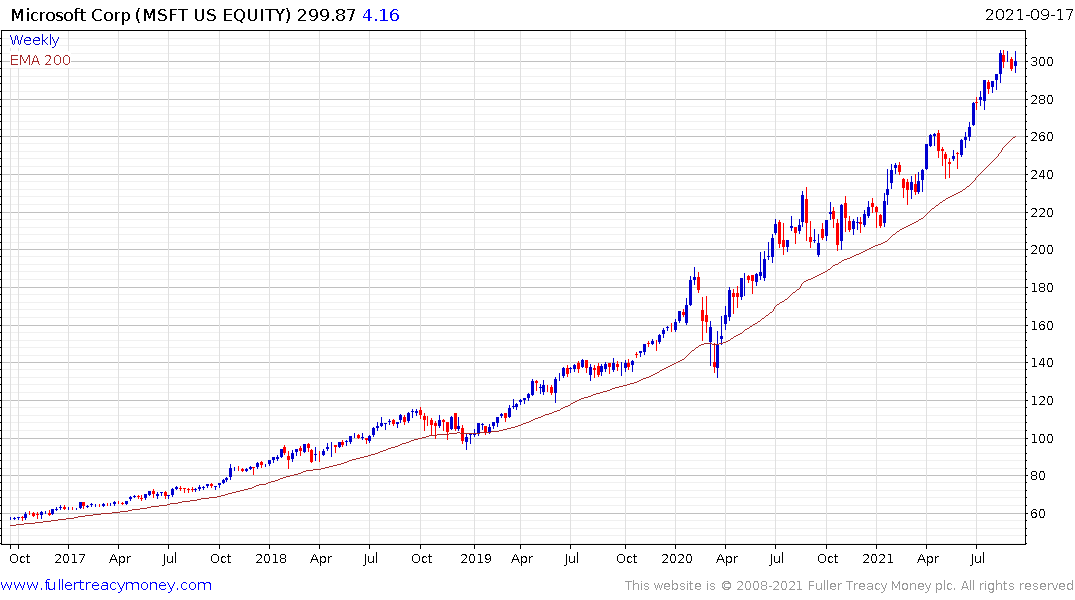 Microsoft does indeed still have a consistent trend and reactions of around $25 have generally been considered buying opportunities over the last year. There is no question that the pace of the advance has picked up but it is not accelerating. There is no evidence of topping at present but we do have short-term overbought conditions. 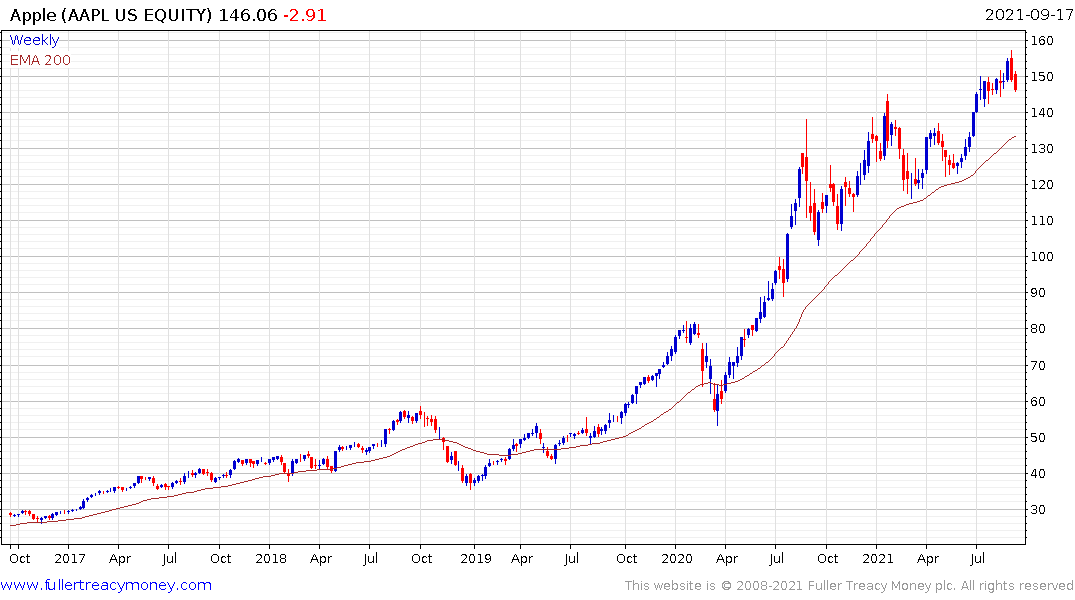 Apple appears to be in the process of unwinding its short-term overbought condition. The share has not been very reliable in holding breakouts so it a dip back towards the trend mean would be unsurprising.

Alphabet has the clearest evidence of an accelerating trend. It has been very consistent over the last year but the ranges are getting shallower and the breakouts less impressive. The $2800 area is where the share should find support if this trend is to remain consistent. A sustained break below that level would represent an inconsistency and increase scope for a reversion towards the mean. 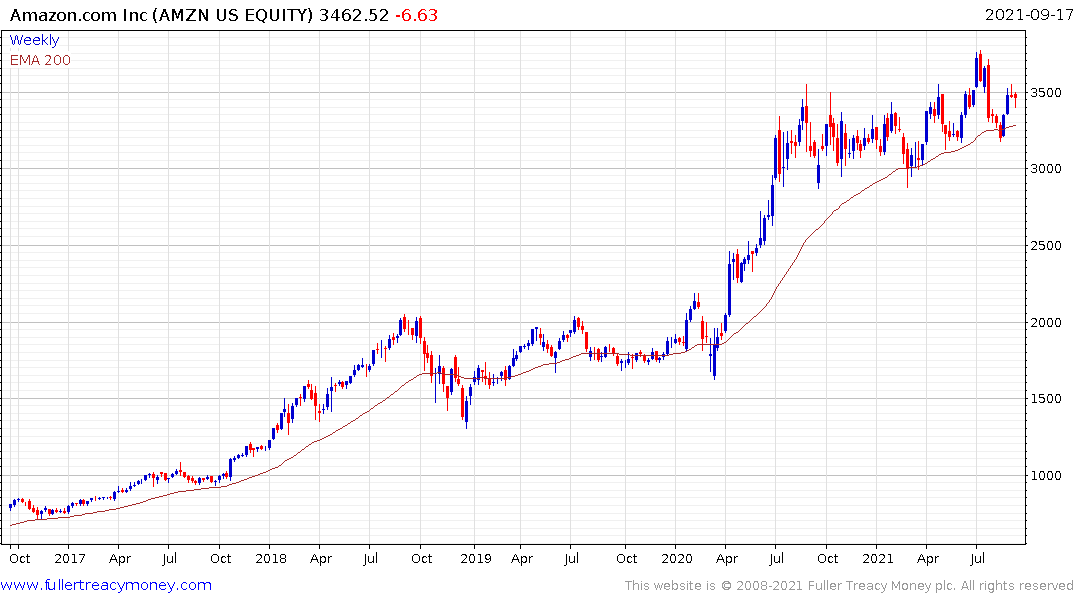 Amazon has put in multiple yearlong ranges over the last decade and each has been resolved with an emphatic breakout. One the last two occasions, it has posted a failed upside break and a wobble before the conclusive breakout. Since the share failed to hold the breakout in July, the next attempt needs to succeed if the trend is to remain consistent. 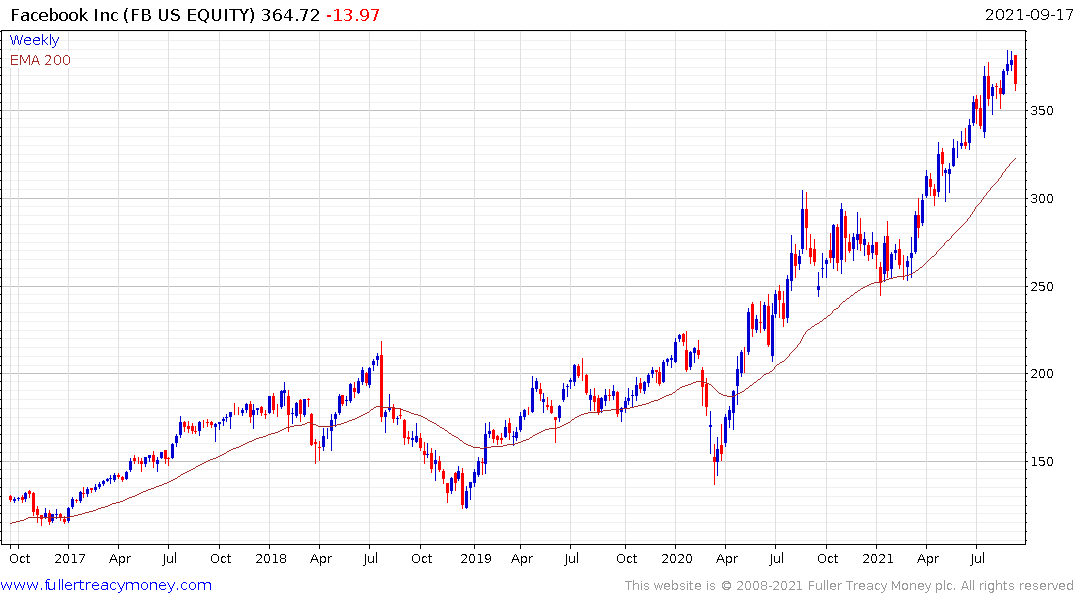 Facebook is coming back to test its sequence of higher reaction lows. The Wall Street Journal’s revelations that it shows favouritism towards powerful users and is fully aware of its undue influence on the mental health of young women represent a risk to the company’s prosperity and may be cause for another medium-term correction.

Ultimately, the pace of growth delivered from the pandemic cannot last indefinitely. The surge in profitability has been fuelled by liquidity provision and that makes the sector very interest rate sensitive. It is no coincidence that the mega-caps have softened as bond yields have steadied. 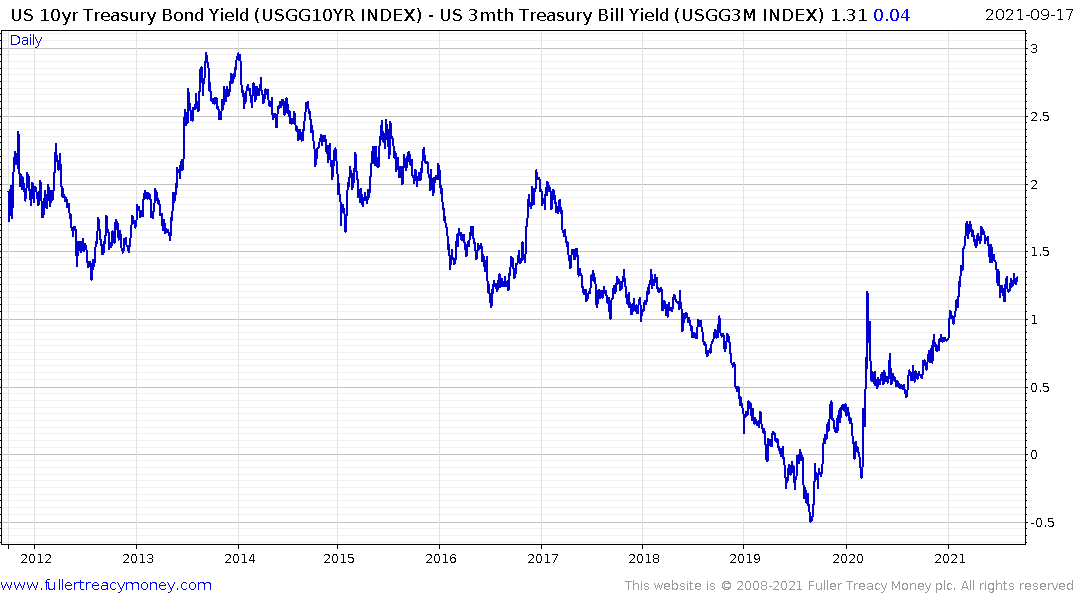 The yield curve spread remains well contained but a break above 175 basis points would begin to represent a challenge for the most liquidity dependent stocks if its breaks successfully above that level.