I wonder if you could please analyse why the historic charts of Japan's main equity market are so divergent?

The Topix bank index peaked at the same time at 1,480 but is still languishing at a fraction of that level, 182.64 today.

Normally the banks are the lead indicator but Japan's banks underwent immense restructuring so I can understand why they have languished but the discrepancy between these charts seems huge.

Thank you for this email which raises important points worth covering with regard to Japan’s primary stock market indices. 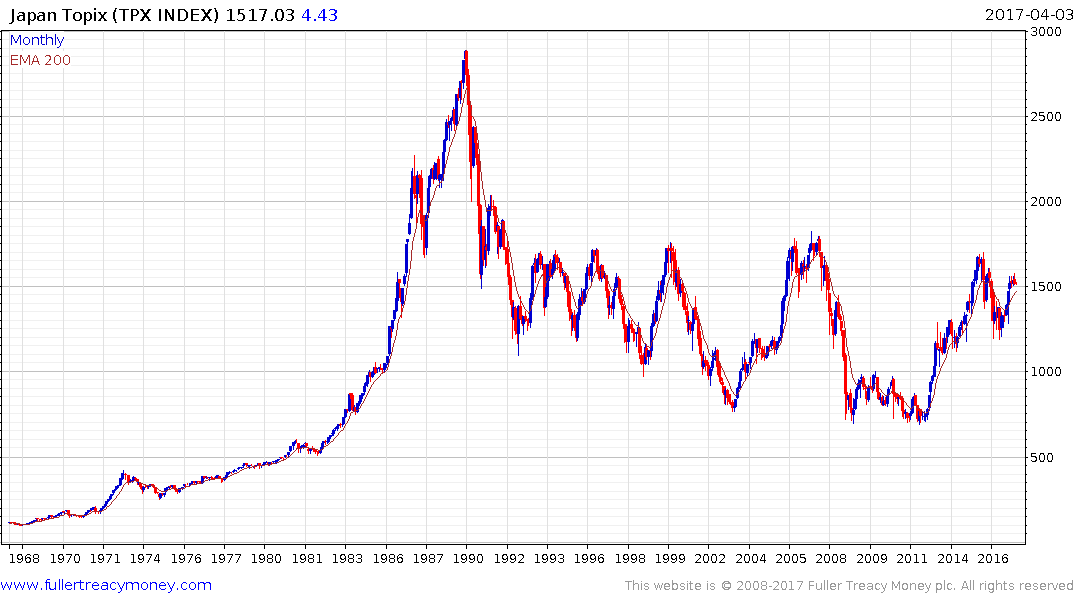 The Topix is also known as the Tokyo Stock Price Index. It is a free-float adjusted market capitalization-weighted index and comprised of all 1997 shares in the 1st Section of the Tokyo Stock Exchange. 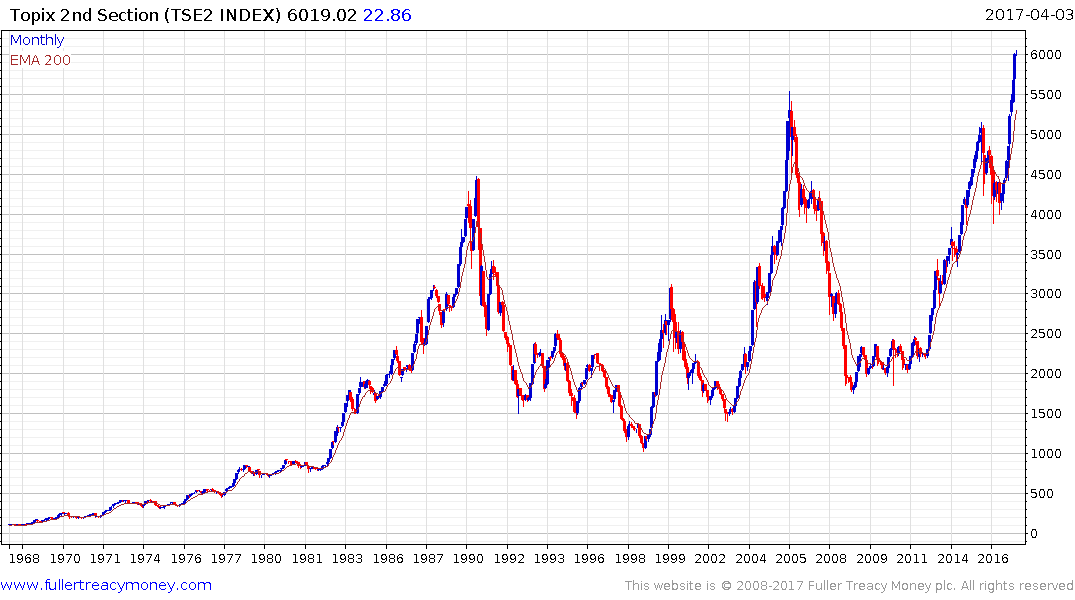 Here is where some of the idiosyncrasies of the system begin. The 1st Section is supposed to comprise all of the large companies and the 2nd Section holds whatever is left. However, at least 80 of the 567 companies in the 2nd Section have larger market caps than the smallest company in the Topix which highlights the fact that the weightings are not actively managed. 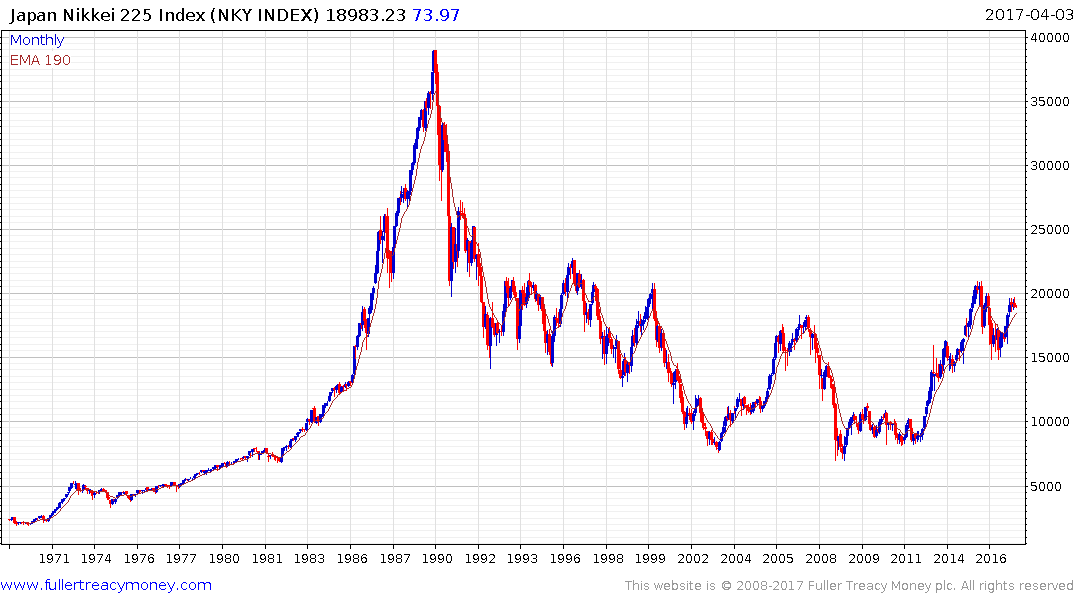 The Nikkei-225 Index is a price weighted average which takes 225 of the largest companies on the 1st Section. That helps to explain the difference in performance between the main indices.
One of the primary objections to how the Japanese indices are calculated had been that they hold significant cross shareholdings in one another’s shares, which reduces liquidity. That is why the Topix migrated to a free-float adjusted market capitalisation model a couple of years ago. 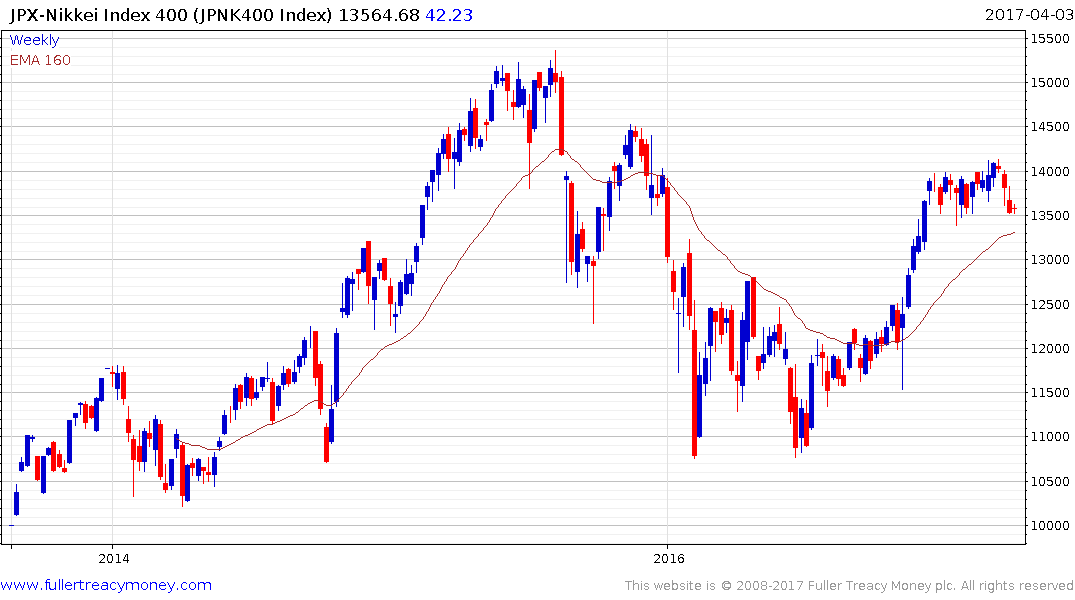 The JPX-Nikkei Index 400 was launched in 2013 with the aim of giving greater credit to well-run Japanese companies. It holds shares from the 1st and 2nd Sections as well as the Jasdaq Index and the TSE Mothrs Index. Here is a section from an article from cernocapital detailing the governance philosophy it adheres to:

This new index explicitly selects companies which focus on the efficient use of capital, s
specifically referring to ROE, as well as those promoting good corporate governance.
The index excludes companies that have been listed for less than three years, have liabilities in excess of assets during any of the past three fiscal years, those which had an operating deficit in all of the past three fiscal years and those which are designated for delisting.

While attractive in theory one of the reasons the Index has not gained further traction is because it has underperformed the Nikkei-225 since inception. 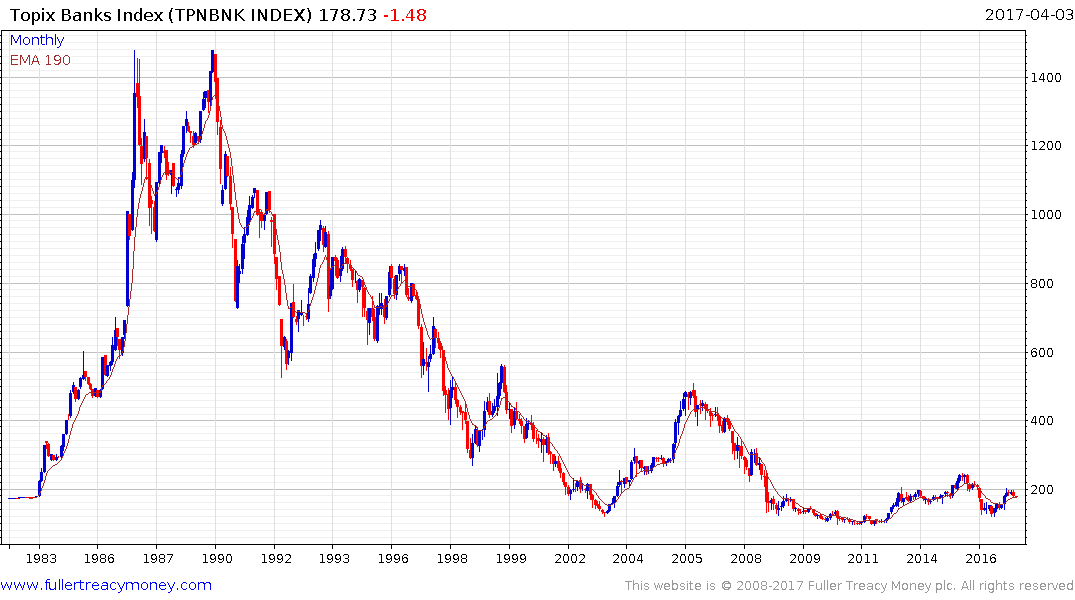 The Topix Banks Index has underperformed for a considerable period for the simple reason that it is hard to make money when interest rates are at zero. Banks have no margin. The Index spiked higher on optimism Koizumi could reignite animal spirits between 2003, and when he stepped down and have been slow to pick up since Abenomics began in 2012. 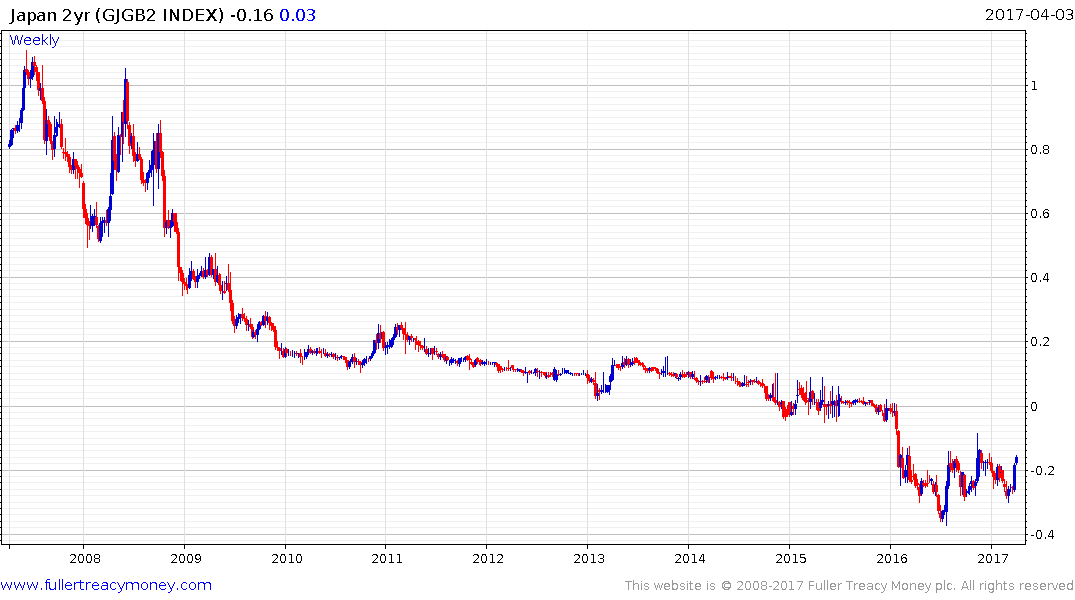 1-year notes currently yield -0.21 but the six-month range is dominated by upward dynamics, suggesting -0.4 probably represents a floor. My firm belief is that if inflation does in fact become a factor over the next couple of years Japan represents a high beta bullish play on it.