Email of the day on investing in Ethereum by Eoin Treacy

As you are an investor in Ethereum (it also comprises 35% of our fund), I've attached my recent Fact Sheet comments fyi :

Ethereum announced on 4 November (after a lengthy period of research, development and extensive testing) the imminent launch of the first phase of the major ETH2 upgrade. Ethereum, like Bitcoin, currently uses Proof Of Work (POW) to secure its blockchain while ETH2 will use Proof Of Stake (POS). POS requires that sufficient quantities of ETH are deposited on the blockchain and that these depositors also run a validator/node to process transactions and reach consensus on their validity.

Depositors/validators are rewarded for the risk they take and the service they perform by receiving additional ETH (the total quantity of ETH issued is determined by a sliding scale depending on the total amount staked). Should depositors act with malign intent they stand to lose their ETH, while tardy maintenance or excessive downtime will result in depositors/validators being penalised. Should the minimum threshold of 524288 ETH and 16384 validators be reached on 24 November, the ETH2 Beacon chain will go live on 1 December (if not then 7 days after the thresholds are reached). Running a validator is not without its technical challenges, and any ETH staked cannot be withdrawn until the current ETH1 chain becomes a shard of the ETH2 chain. That could take anything from one to two years from now. We are potentially keen to stake some of our ETH, but are proceeding cautiously and would likely use a third party to run the validators on our behalf.

Vitalik Buterin, the founder of Ethereum, recently posted a blog post https://vitalik.ca/general/2020/11/06/pos2020.html on why the new POS will be more decentralised, more secure and far more resistant to attack than the current POW used by ETH and Bitcoin. It is worth remembering that the majority of Bitcoin’s mining is in China – and ANT Financial’s IPO travails demonstrate yet again the extent that power is centralised in China. The next priorities for Ethereum are to release Sharding on ETH2 (which will increase the potential transactions per second to 100k) sometime in the next year as well as Ethereum Improvement Proposal (EIP) 1559 which will substantially improve Ethereum’s fee model – including burning the bulk of the fees generated on the system. EIP1559 will likely have the effect of reducing Ethereum’s net issuance (after ETH1 becomes a shard of ETH2) to negative.

On a one to two year horizon, Ethereum therefore offers the following advantages relative to Bitcoin :1) greater security and resistance to attack, 2) more decentralised (an average consumer laptop can run many nodes easily vs the large server farms needed to mine Bitcoin ), 3) lower inflation/issuance, 4) vastly higher scalability (100k transactions per second vs 7), 5) full programmability from inception (while Bitcoin’s programmability is limited), 6) the ability to earn a yield on your ETH through staking (which will become very easy in time and with no lockups), 7) the centre of the DEFI (Decentralised Finance) ecosystem, which it is already, and 8) use vastly less electricity (Bitcoin’s POW uses as much as say New Zealand).

I am however also very bullish on Bitcoin….the bull case of which is becoming increasingly well known (for example https://winklevosscapital.com/the-case-for-500k-bitcoin/). The Ethereum bull market has barely started in my opinion.

I can send the full Fact Sheet if you are interested.

Thank you for this detailed email which summarised a great deal of information relating to the evolution of the Ethereum network. I agree that the transition to the proof stake rather than proof of work model is a significant catalyst for investor interest. I’m sure subscribers would be gratified to see your fact sheet.

One of the biggest challenges to valuing cryptocurrencies has been lack of fundamentals. Charlie Morris developed a theory that fair value can be ascertained by network throughput and incorporated that metric into his Bytetree site.  The introduction of what are effectively dividends opens up the dividend discount valuation model for Ethereum. The provision of custody services has also been a significant catalyst for institutional interest in the sector.

The Grayscale Bitcoin Trust is currently trading at a premium of 16.6% but the historical average is around 40%. That may contract as the number of investment vehicles expands.

There are many comparisons between gold and bitcoin. I won’t get into those right now but one of the most important is the commonality in the sequential nature of interest in the sector. 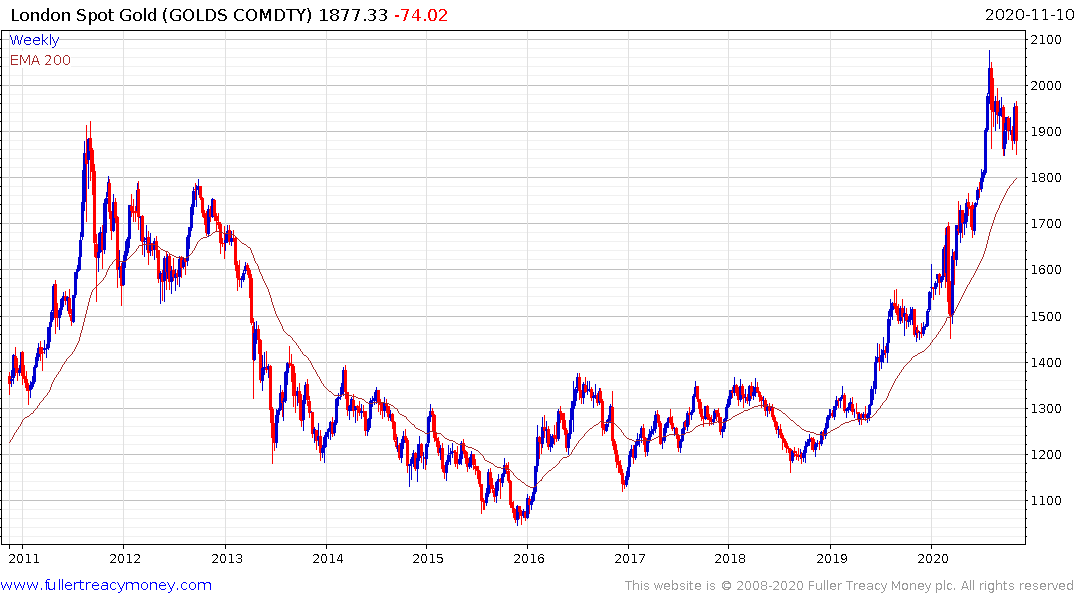 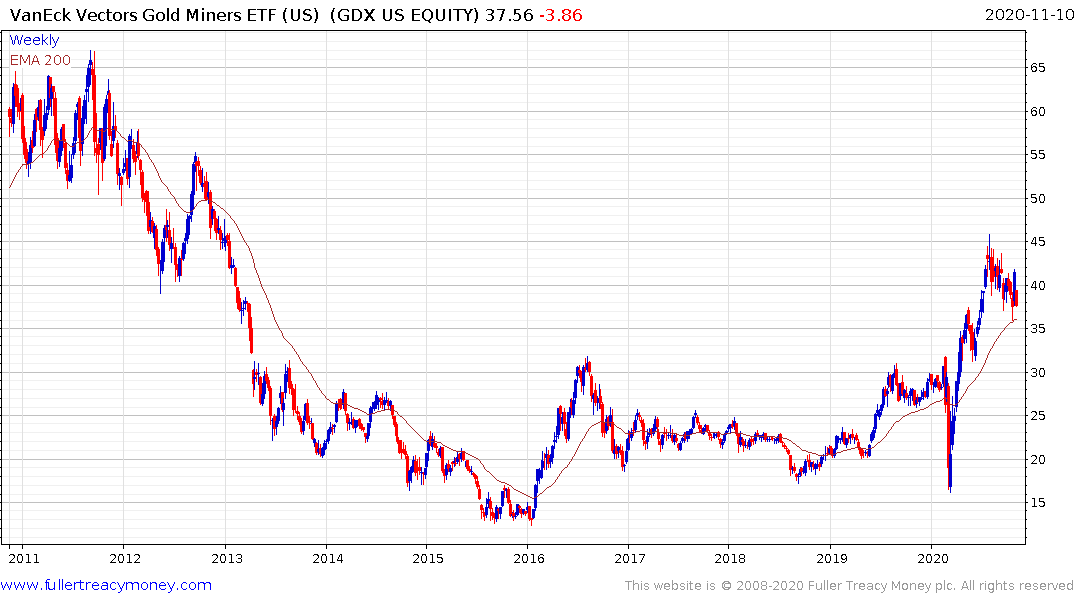 The precious metals sequence of events was gold, large dividend paying gold miners, silver junior gold miners and explorers are still in their base. 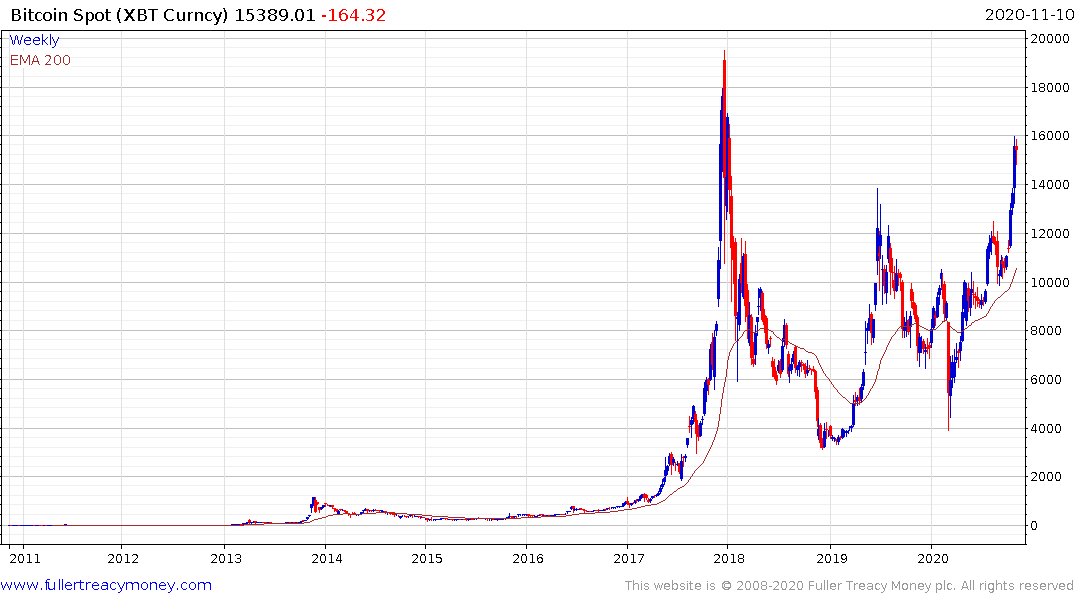 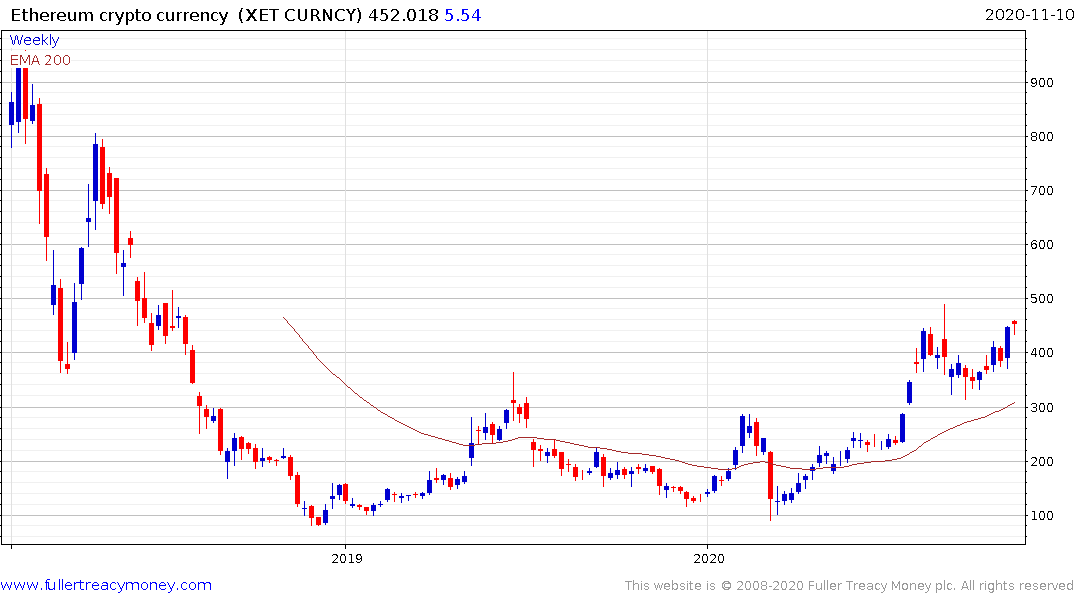 Bitcoin has just hit a new recovery high, Ethereum is still forming a first step above the base and the alt-coins are only just beginning to recover. If interest in gold is any guide, the cryptocurrency market will also move in a sequential manner as interest and demand for a leveraged play increase with bitcoin prices.