Email of the day on global liquidity addiction:
Comment of the Day

Email of the day on global liquidity addiction: by Eoin Treacy

I concur to Iain's comments, you are on something. Liquidity has to go somewhere, and it is evident that liquidity went to financial and some hard assets (2-3 months ago I read an article saying that Whiskey had been the best performing hard asset with 582% gain over the past 10 years - 48% in 2018 alone!). https://www.thedrinksbusiness.com/2018/04/rare-whisky-offering-better-returns-than-gold/

I would add that CBs objective was first to rebuild banks balance sheets to avoid a world financial meltdown; it has never been to spur spending with individuals, at least at the beginning and today I sometimes doubt that the posted intentions and the reality of thinking are rather different. CBs gave time to Governments to reform themselves (Southern Europe in particular) with limited success.

In the US asset price inflation has most often than not been one of the FED tools (remember the rumors at the time of LTCM failure about the FED buying the S&P, Dow, Nasdaq with futures via Goldman) to spur consumer confidence. However, the rest of the world consumers, particularly in Europe, are not reacting like Americans (historical saving rates is a good indicator).

Data show that for decades the lower middle-class to low paid workers have not seen their revenues increasing (and not only in the US). We are in a secular deflationary environment: technology, aging population, economic globalization, immigration which weighs on the least educated/paid. The negotiation power of employees has zoomed down in most countries with the individualization and fragmentation of Western societies (see the shape of unions in Europe but - till now - the exception of Germany) as well as technology.

CBs have not yet used the monetary nuclear bomb which is to directly hand over money to consumers (and small cos), bypassing banks which failed in their role of financing the real economy.

An ever-growing part of the population in the Western world is getting pauperized and this cannot go forever (welfare state has its limits - see France) whilst Wall Street is bailed out time and time over (last one after December meltdown). Without going back to the roots of capitalism

In addition, there are contradictions in regulations. Basle III aims at lowering banks BS risk (which is right) when the best risk adjusted assets are sovereign debt at 0% weighting; in the meantime, banks are blamed for not lending to small cos and individuals (but at over-inflated consumer credits which is at multiples of inflation rates and revenue growth). The functioning of capitalism has been disrupted by CBs policies post 2007-2008: the risk/reward ratio which is the very essence of capitalism does not work any longer and malinvestment is the rule (an interesting analysis would be to see the growth of goodwill in BS post acquisitions and subsequent write-downs). A point in case is the sheer amount of share buybacks which make sense financially and taxwise but do not add anything to the real economy.

We will not get out of the crisis by adding debt to a world over indebted and counting : +44% since end of 2018 to Q3 2018 (+$35 tr) which fueled financial assets and some hard assets (I just see the price of real estate in Luxembourg and it is crazy :  some projects in the center of the city are selling at 16.000 euros/sq m.).

Velocity of money has gone down alongside inflation and is at its postwar low, but seems to have reached an inflection point. 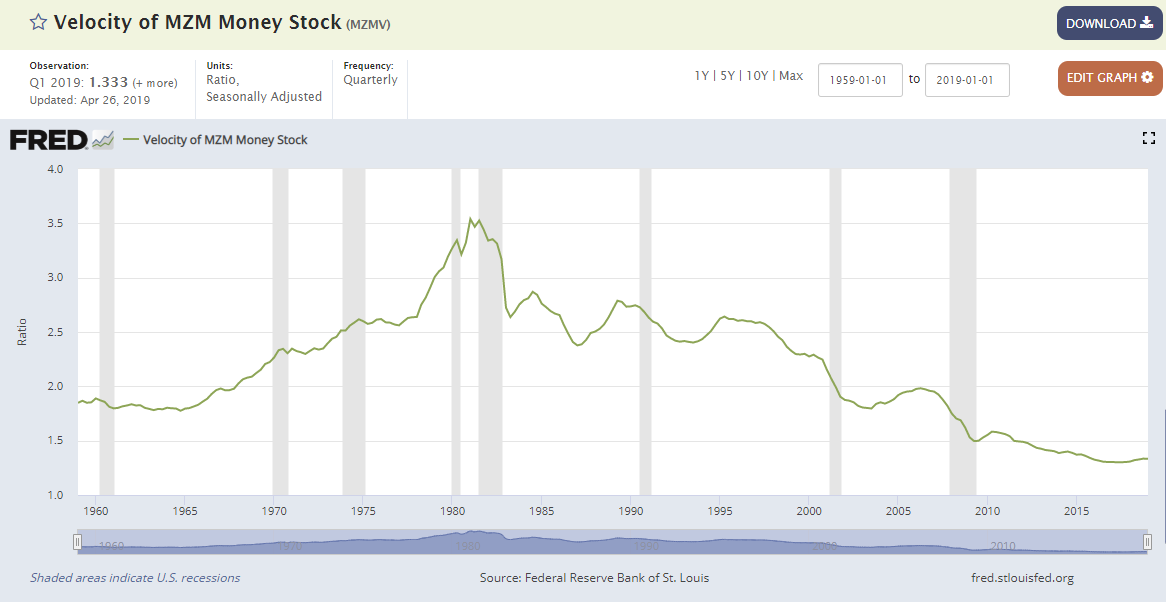 When multiplying MZM velocity by MZM money, results are opposite whether quarterly or annual data are used...

Thank you for this detailed account of the global macro environment. We have long characterised this bull market as liquidity fuelled and that is as true today as it was back in 2009. The clearest conclusion therefore is that we have to be alert to the liquidity environment because the asset price inflation which has been the primary contributor to this bull market is dependent on it. In other words, markets are addicted to liquidity and like any addict, withdrawal would be painful.

This note from Bernard Tan, posted in Comment of the Day on March 20th 2019.  highlights how:

The experience of General Electric is another cautionary tale. The big lesson is these fallen angels will do whatever it takes to sustain their investment grade rating which means they have had to sell assets which is to the benefit of private equity firms but also to bond investors willing to buy the dip. General Electric’s 5% perpetual was trading at a yield of 20% in November, that’s now 6.7%. I suspect this is just one example of the kind of opportunities that are going to arise as this trend is explored.

I created the following chart when I wrote Crowd Money. The Fed will always increase the supply of money if velocity of money declines. The only way we could get out of control inflation is if they do not remove that liquidity when velocity picks up.

The fiscal stimulus in the USA has coincided with the downtrend in velocity of money moderating and the Fed reducing the size of its balance. If velocity pops on the upside it would require more quantitative tightening which would siphon liquidity out of the market and could potentially cause a recession. That is how bubbles burst.