Email of the day on fixed income markets by Eoin Treacy

This chart is the main reason why rates continue to be so low. The market has simply stopped listening to the Fed’s optimistic forecasts. Investors are not willing to trade rates up before the economy is on a solid growth trajectory with higher inflation. In the meantime the hunt for yield will continue. The risk is that the Fed eventually will be right and inflation starts moving up toward 2%. Once that happens fixed income investors will turn around for real and position themselves for higher rates. But a significant amount of fixed income wanting to re-position and a low primary dealer inventory of spread products could make fixed income markets – and therefore also equity markets – vulnerable to future inflation releases. Including the CPI data that comes out this week on Thursday.

Thank you for this interesting graphic which as you point out depicts just how bad the Fed is at predicting GDP growth. I agree with your assessment that the majority of fixed income investors are waiting for concrete signs of inflation before selling. What choice do they have? The alternatives are not attractive. 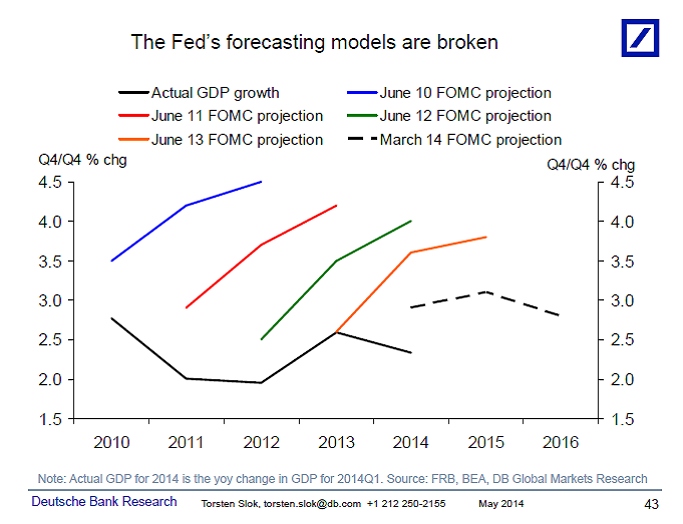 It is often said that the greatest sin in fund management is to be wrong on your own. Pre-empting inflation, at least as the Fed defines it, is a dangerous exercise since the arguments for and against deflation are reasonably well balanced. What we do know is that one of the central aims of QE was to inflate asset prices and It has been successful in this regard. Housing is recovering and financial assets have multiplied in value. Fund managers seeking to outperform a benchmark cannot take the risk of exiting too early. In fact, many introduced hedges last year in anticipation of an additional decline, and underperformed as a result. This year they are much more cautious about hedging. 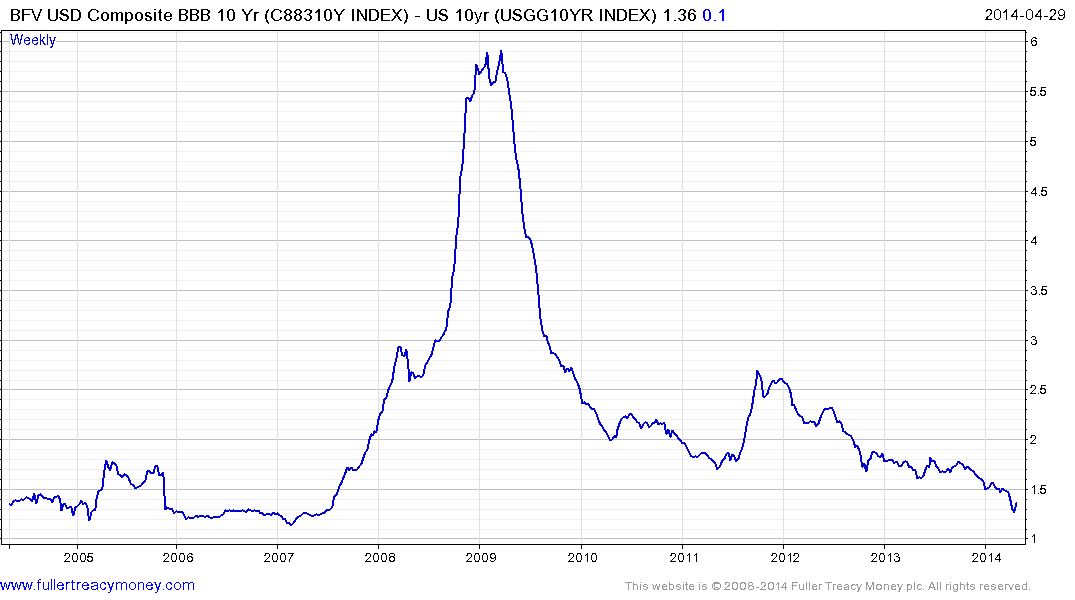 What then can we conclude from the swift BBB compression of corporate spreads over the last three weeks?If we think in terms of fiduciary responsibility rather than relative performance, the attraction of well-capitalised companies with strong management teams over the dubious governance of the Treasury is obvious. However the lust for yield in a low interest rate environment is pushing investors into progressively more risky assets. The acceleration in the tightening of spreads suggests desperation on behalf of buyers and is unsustainable. Spreads are as tight now as they were in 2007. They may yet get tighter but are no longer cheap.

The fact that so many bond investors are oriented towards the same catalysts suggest that when the Fed’s measure ofinflation does eventually turn upwards, the reaction of the bond markets is likely to be violent. Meanwhile both the Dow Jones Industrials and Dow Jones Transports are hitting new highs in a classic Dow Theory bull market confirmation.

As an aside I have been contemplating just how effective a measure of inflation the PCE Deflator is in an era of deleveraging. Many of the hedonic interpretations of consumer behaviour it incorporates are predicated on credit. For example, homeowners are valued as the cash flows they would generate if they were renting. That is at least plausible when people are taking out home equity loans, refinancing and taking on leverage. However if I own my house and am decreasing debt then my chief outlays are on food, energy, transport, education, health and insurance. The performance of these items should take on a greater role but probably won’t because they are inconveniently volatile