Email of the day on Facebook and FAANG by Eoin Treacy

Many people are worried that Facebook collapse may have wider implications for not only the tech sector but also by contagion the broader market. What do you make of FB and its future and effect on tech / broader market? This is an important question as you know.,,,tech has been a cycle leader many thanks for your continuing good service

Thank you for this question which as you say is something a lot of people are ruminating on. Leaders tend to lead in both directions has been an adage at this service for decades so Facebook’s large downside weekly key reversal is a significant development. Equally Apple reaching a $1 trillion market cap today is an important development not least because it closed on the high of the day.

The easy money has been made in social media. Incremental growth is now going to be harder and therefore more expensive. Policing content on the various sites is also going to be more expensive and artificial intelligence alone is not up to the task. That represents a significant additional expense. Meanwhile competition for each new generation of users is intense and pressures companies to constantly innovate which is a task that gets progressively more difficult as they grow larger.

Facebook acquired Instagram and WhatsApp, which extended its reach into younger generations but decided to copy Snapchat rather than acquire it despite the synergies a takeover would have represented. That represents a change of tactic and suggests Facebook’s management believe they have an unassailable position. We’ll see. 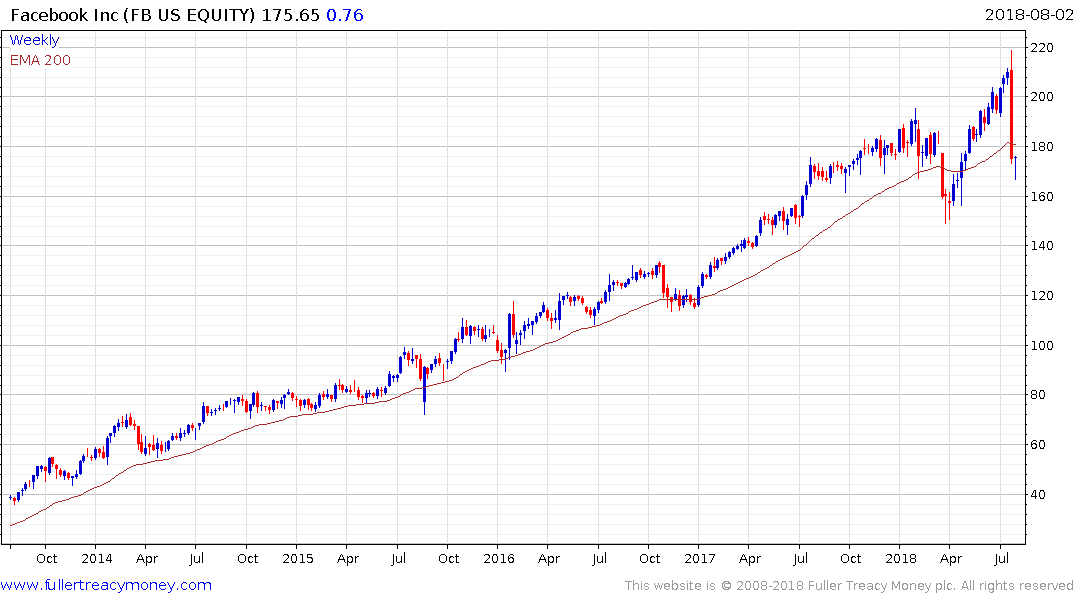 The massive reaction against the prevailing trend suggest a peak of medium-term significance. It is quite normal to see a period of ranging follow such an event. If that is followed by a breakdown we could conclude a downtrend is unfolding. 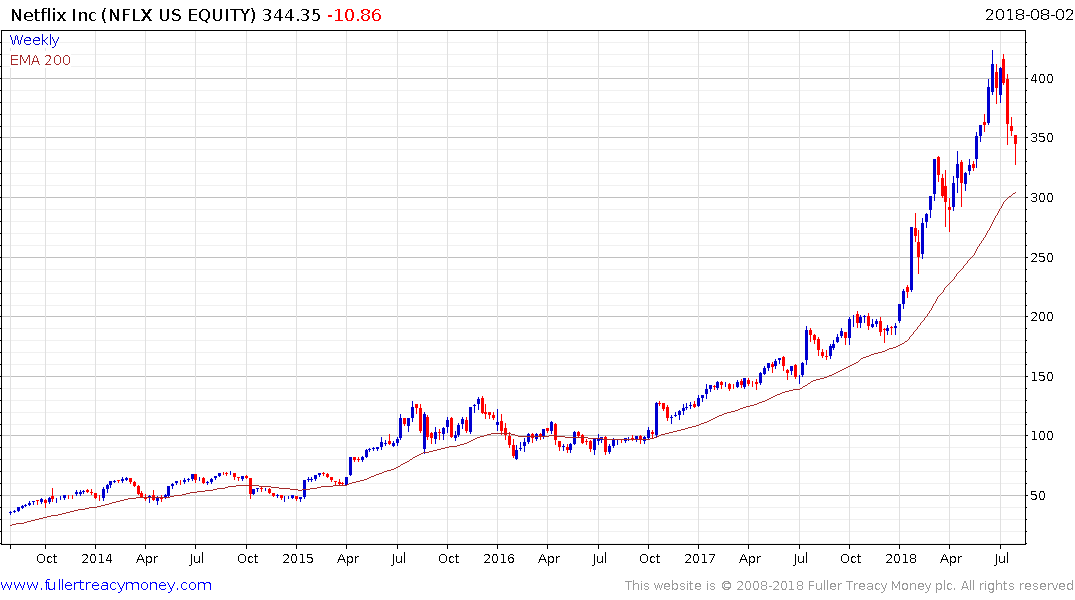 Even so, Facebook has no debt or loans outstanding. Netflix on the other hand is trading on a P/E of 150 and is a B rated credit. The share has almost unwound its overbought condition relative to the trend mean and has paused in the region of the upper side of the underlying trading range. 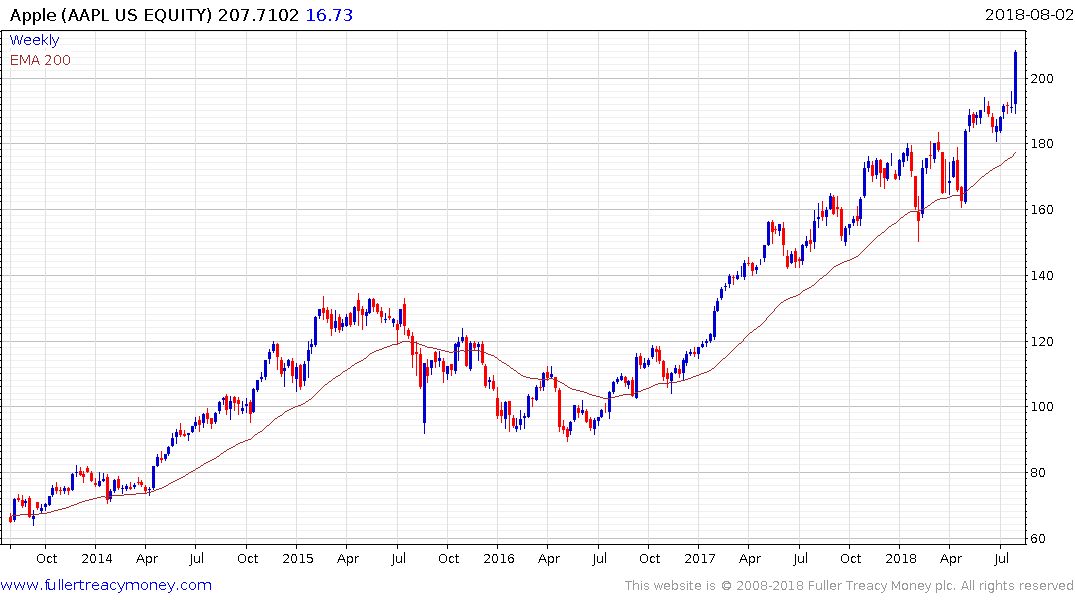 Apple’s surge this week, with prolific buybacks and increasing adoption of a subscription business model suggest people have been in a hurry to own the share. However, it would not be surprising to see a pause now that the big psychological $1 trillion level has been reached. 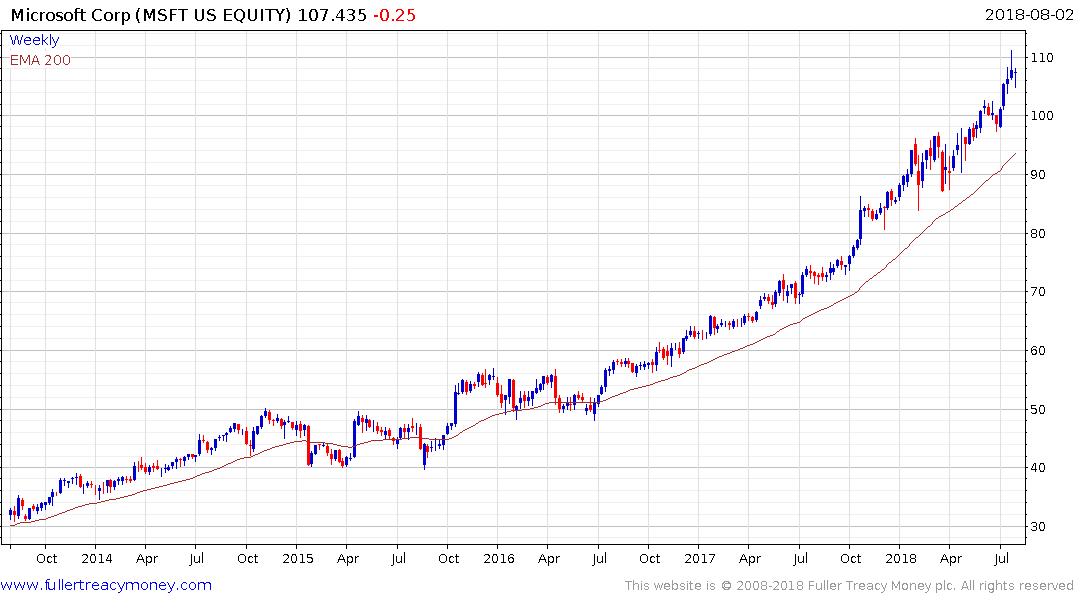 Microsoft also sports a medium-term trend that is picking up pace and adopted a subscription business model ahead of Apple. 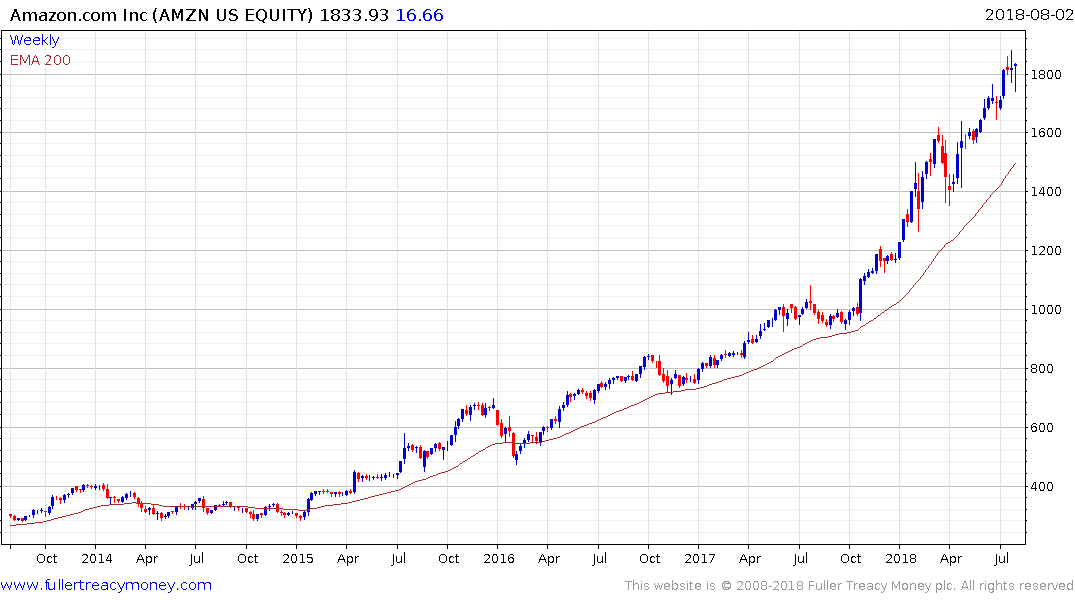 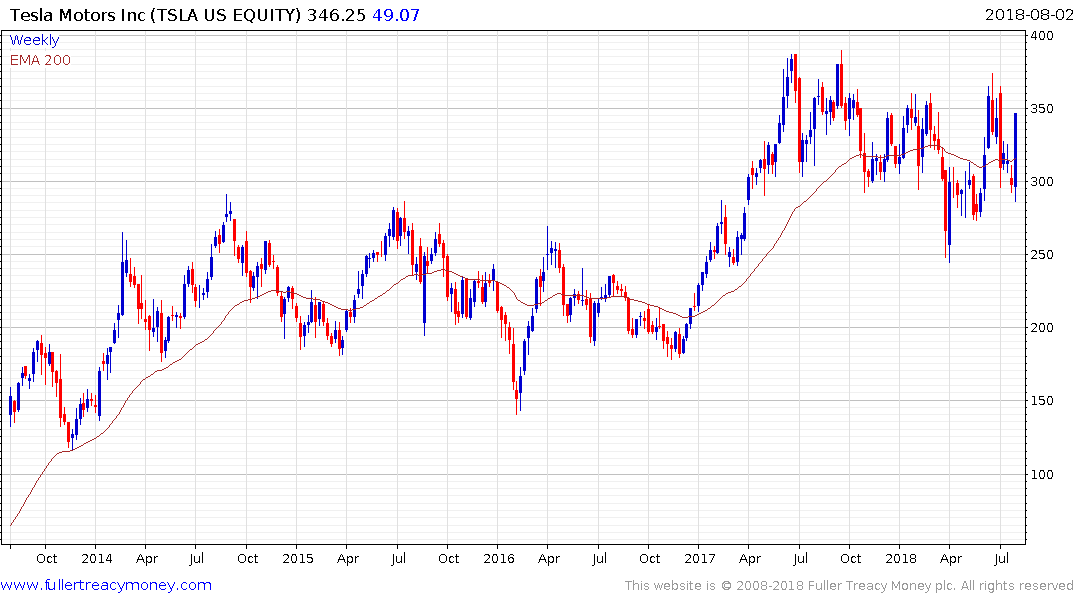 Tesla is firming within its range and rallying from the psychological $300 level on news that its loss was narrower than expected and that it plans on tapping Chinese capital to build a battery factory in the country. 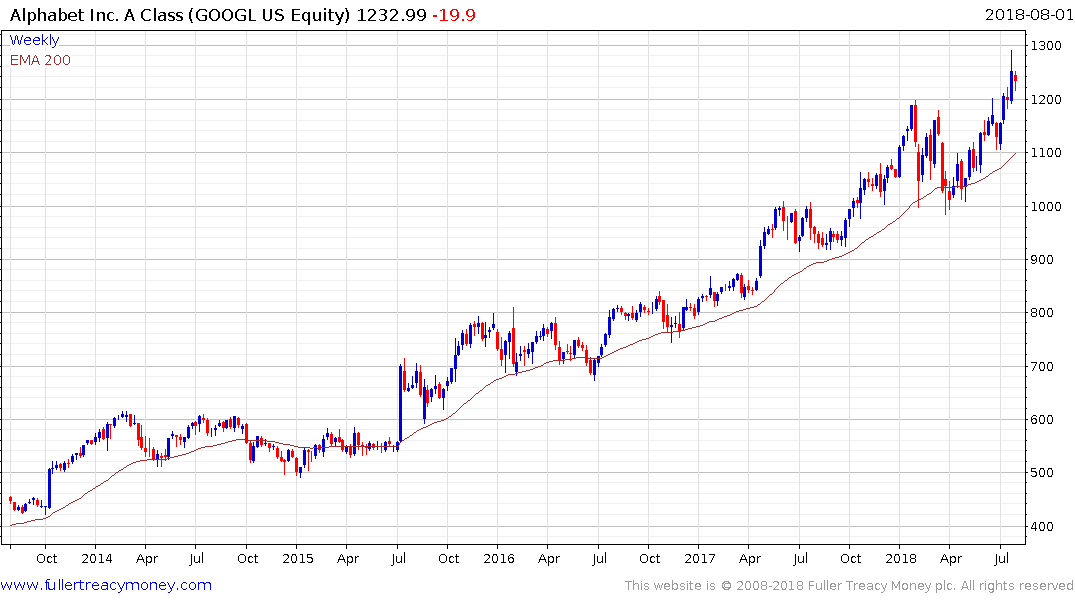 Alphabet/Google has bounced from above the $1200 level, which represented a previous area of resistance. As long as it is holding that level we can conclude that consistency of the medium-term trend is being repaired. 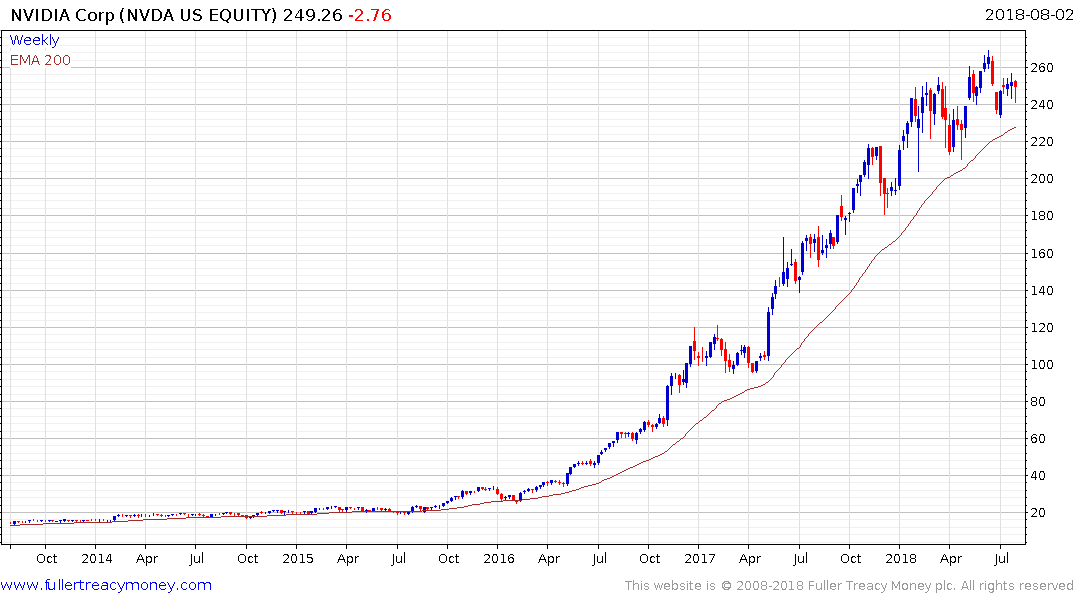 Nvidia has lost momentum this year but continues to hold a progression of higher reaction lows. 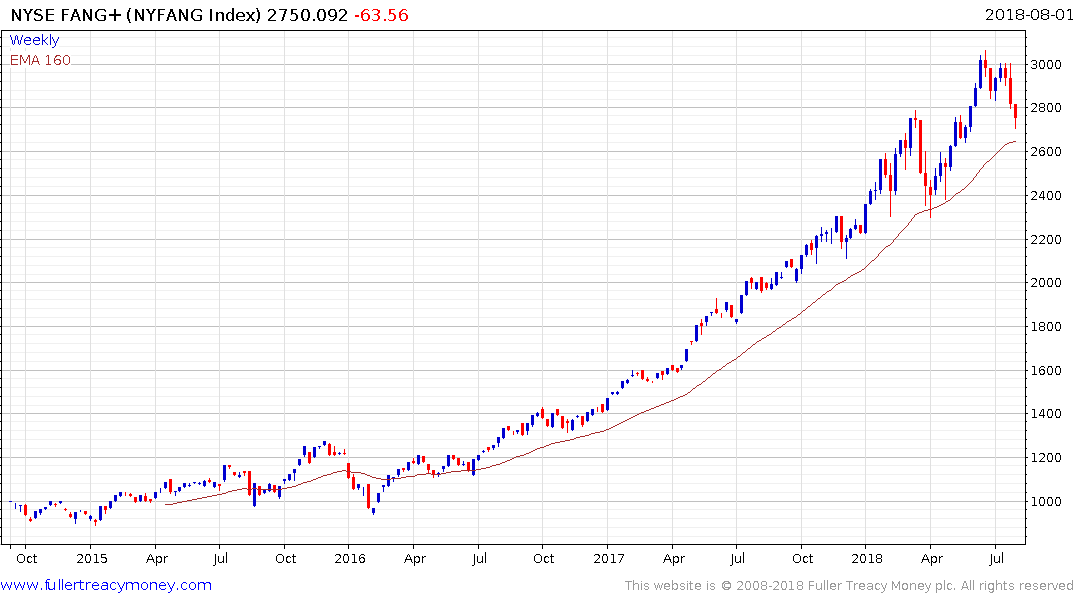 The NYSE FANG+ Index which holds all these shares along with Twitter, Baidu and Alibaba has paused but is firming from the region of the upper side of the underlying range. The lack of commonality following Facebook’s pullback suggests further concentration on an even smaller number of mega-cap names. That in itself is supportive of the view we are in the third psychological perception stage of the bull market but there is no evidence it is over. 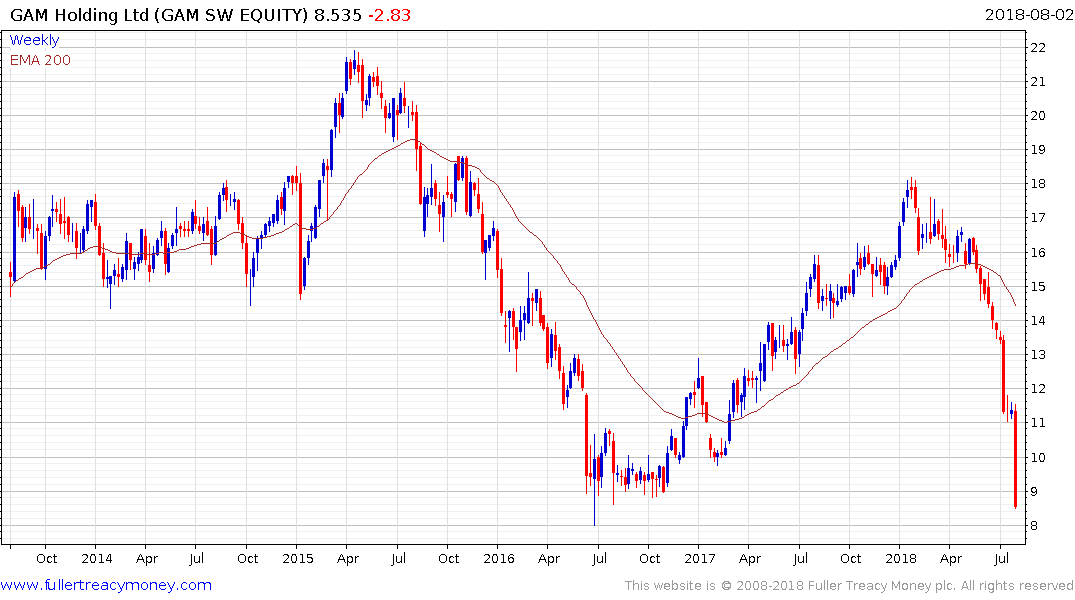 The problems arising from GAM Holdings unconstrained bond funds are also worth watching particularly if they see wider contagion.