Glad you had a good meeting in London the week before last. Would have been there, but still recovering from breaking a femur in June.

First, from a John Mauldin letter:

Quick anecdote from my time in Frankfurt. I spoke for fund manager Lupus Alpha to approximately 250 pension fund managers, representing most of Germany’s retirement monies. I asked for a show of hands on whether they liked being part of the European Union. Almost everyone raised their hands. I then asked if they thought participating in the euro was a good thing. Probably 80% raised their hands. When asked who doesn’t like the euro, maybe 10% of the hands went up.

Then the money question. I asked if they would be willing to take Italy’s debt and all the debt of every eurozone member and put it on the European Central Bank balance sheet, with caveats about controlling national budgets. Fewer than 20% of the hands went up.

I then engaged the audience further, saying, the last two questions were essentially the same. If you want to keep the euro, you’ll have to do something about the imbalances between the countries and debts. No monetary union in history has ever survived without becoming a fiscal union as well. Even reminding them that failure to do this might cause the euro to break up and bring back the Deutschmark didn’t seem to change many opinions. I reminded them that a Deutschmark would mean a serious recession/depression in Germany as it would raise the price of all German exports by at least 50%. Mercedes and BMWs are expensive enough for Germany’s customers, let alone at a 50% price hike.

This audience should have easily accepted the argument for putting all European debt on the ECB balance sheet. Imagine if I asked the typical German voter, especially those in rural areas. That tells me Europe could have a bumpier future than I thought.

Second, a piece from the FT (as an attachment) about whether property is still a long-term bet for retirement. Conclusion: it's not.

Thanks for all great recent pieces. I really liked the Ray Dalio discussion.

Have a great Christmas.

Thank you for this informative email and I am delighted you are enjoying the Service. The simplest way to summarise the contradiction at the heart of the Eurozone question is “you can’t be half pregnant”. The EU is heading towards federalism or it will break up. The status quo is already being challenged and it will continue to be challenged as a long as millions of people endure lower standards of living.

The Eurozone’s administration is perfectly aware of this problem which is why a commitment to fiscal restraint is being imposed on every member. In the eyes of bureaucrats it is only when the debt to GDP ratios of all member states are roughly equivalent could a shared fiscal future be considered. They earmarked the 2030 timeframe for that possibility. However, that EUtopian ideal fails to take into account the unwillingness of subject populations to tolerate decades of austerity. If we are looking for the root cause of populism in Europe we don’t have far to search.

The lack of any appetite for monetary tightening at the European level is one of the primary reasons the Euro continues to trend lower.

Meanwhile the attached article by Merryn Somerset Webb for the FT sounds a very bearish note for UK housing. More than a few international investors I have been talking to recently are of the opinion the UK is where to look for bargains, precisely because of the uncertainty. 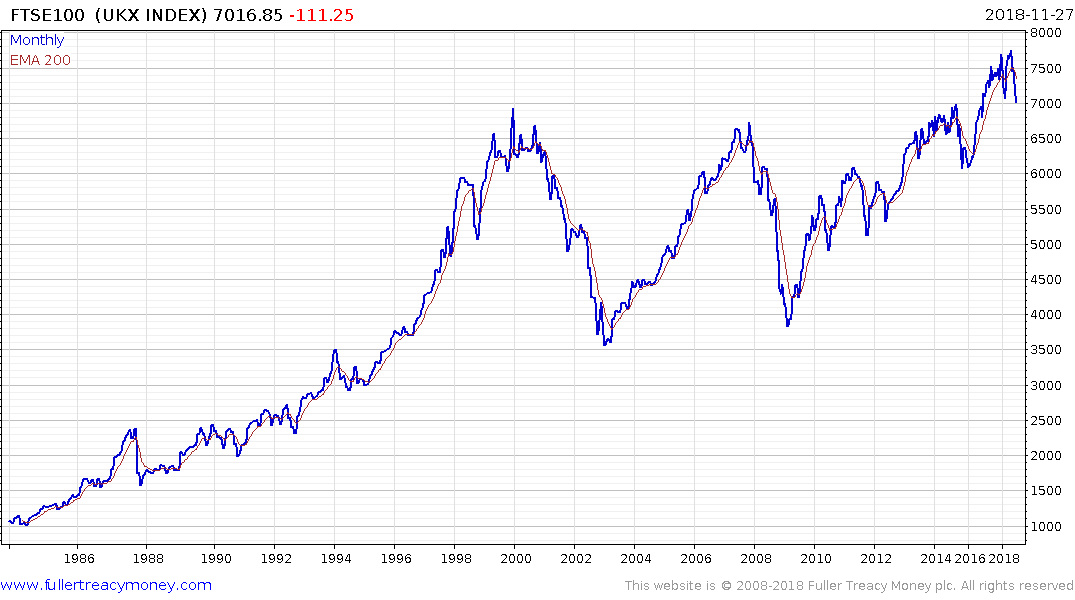 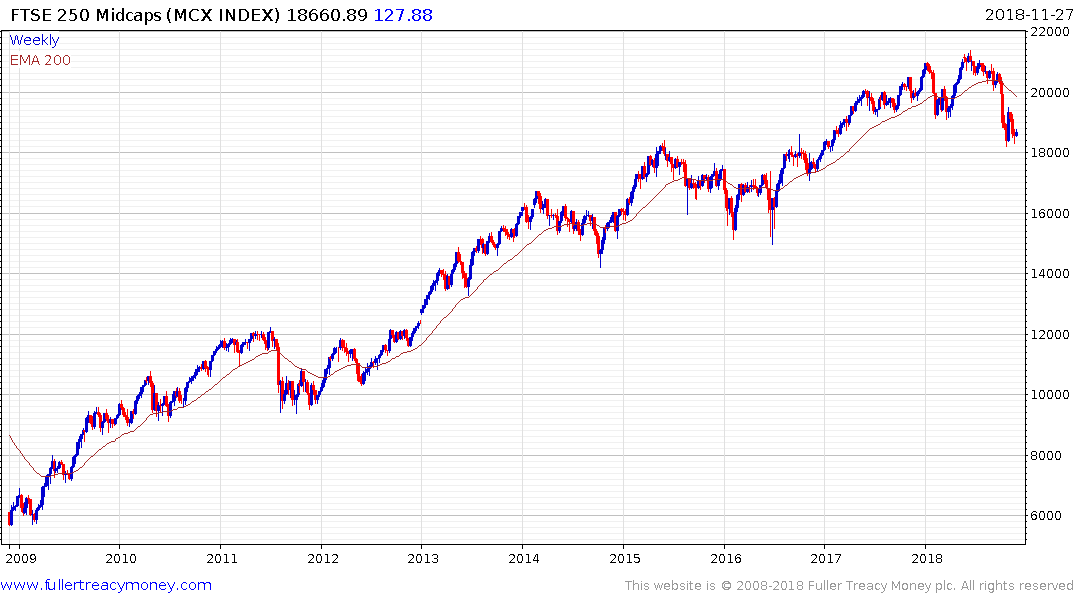 However, it is also worth considering that the FTSE-100 went sideways for 16 years and the only place to find performance was in the midcaps sector. The large cap Index broke out in 2016 and continues to form a first step above that long congestion area.

The housing sector is becoming subject to a lot more taxes and regulations which is likely to sap speculative interest. Therefore, I think it is not too much of a stretch to predict the stock market is likely to outperform property over the coming decade in the UK.