Email of the day on emerging markets
Comment of the Day

Email of the day on emerging markets by Eoin Treacy

Think, you may find interesting this story on the 20th anniversary of BRIC idea. It's fascinating how well judged it was in the 2000s (at least from the point of view of drawing investors' interest to the leading emerging markets) and how wrong in the 2010s

Thank you for this interesting account which may be of interest to subscribers. China’s entry into the WTO and the determination to devalue the Dollar after 9/11, coupled with chronic underinvestment in commodity supply helped to drive a secular bull market in emerging markets and commodities between 2000 and 2011.

The Dollar bottomed in 2011 and the USA’s financial and consumer sectors completed their deleveraging. At the same time, large numbers of companies broke out from their base formations and the introduction of 4G and broadband drove value creation for what are now mega-cap technology stocks. This decade has seen significant commodity market underperformance. A lot of new supply was brought online and the growth multiples on which the investment was based did not prove accurate.

Today, the pandemic and the monetary and fiscal responses to it, dominate public discourse. Commodity demand is way up. That’s a big change from the last decade. The determination to build back better and for everyone suddenly to become impatient to live their best life has transformed the outlook for the industrial resources sector. That’s particularly true for the metals deemed to be fuelling the “green” revolution like copper and lithium. 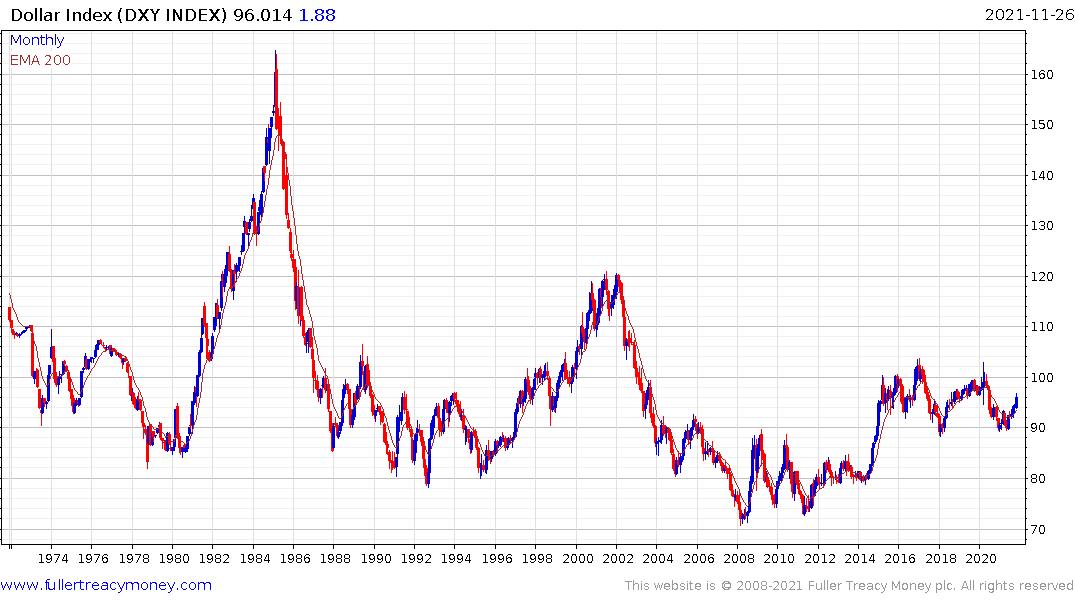 As I have been saying all year, the Dollar is the lynchpin for a migration away from the dominance of mega-cap led Wall Street, to emerging markets and commodities. On a currency adjusted basis, the best performing emerging market stock market over the last few years has been India. It represents the same kind of demand growth market as China did 20 years ago. That’s the pull factor but the push to force global investors out of US assets is not yet present. The Dollar remains strong and the uncertainty about the latest strain of the COVID-19 virus favours developed market flows.