Email of the day on emerging markets:
Comment of the Day

Email of the day on emerging markets: by Eoin Treacy

According to yesterday’s [Ed. Tuesday] “Comment of the Day”, “Some bear markets...are occurring in developing countries where governance and politics appear temporarily out of control...Brazil is an example”.

The noted economist, Frank Shostak, says, “In countries such as Turkey and Argentina a tighter stance by central banks has set in motion an economic bust.

Sam Kee Chong in the Malaysia Chronicle recently concluded that, “Indonesia might be heading for the perfect storm...and that the other countries, in the region are vulnerable.

The above are examples of many analysts alerting us to the emerging markets danger which other economists warn could be the “black swan” that inflicts widespread damage to financial markets in 2014.  It will not be a black swan event as far as FT Money is concerned but your views regarding the severity of the threat, or its imminence, would be appreciated.

Thank you for these informative links and please also see David’s leader on Tuesday, including the last paragraph of his response. In short we can probably expect more volatility in terms of total return from emerging markets than has been the case over the last decade.

As previous delegates at The Chart Seminar will be aware, we try not to introduce teaching examples of our own but rely on active participation from those present to generate suggestions for instruments of interest to them for us to work with. The Singapore venue for The Chart Seminar last week was notable because the vast majority of delegates were involved in private banking, with the result that in the first day the only examples requested were for currencies.

This is perhaps not so surprising since the most notable event that has occurred in the region this year has been the pressure experienced by emerging market currencies and the knock=on effect this has had on the region’s stock markets. As a result investors are asking the question whether the bull markets that have prevailed since 2008 are still in force.

The ASEAN region benefitted enormously from capital inflows in the aftermath of the credit crisis with a number of markets pushing on to new all=time highs by early 2010. As we pointed out following the sharp pullbacks experienced last May, these losses of uptrend consistency were likely to presage a more difficult trading environment for the region’s stock markets.

The US Dollar halved in value against the Real from 2000 and lost at least a third of its value against the majority of Asian currencies over the same period. Concurrently the Yen embarked on an impressive rally against a number of Asian currencies while China came under pressure to allow its currency to appreciate. The net result was that Asian economies were able table to tolerate stronger currencies not least because the reforms that followed the Asian financial crisis were paying dividends. This was powerfully attractive for foreign investors who had the benefit of concurrent capital market and currency appreciation.

With the US economy now leading the way out of the credit crisis, Japan adopting a massive quantitative easing program and the strength of the Yuan being questioned, investors are logically asking how realistic expectations of significant additional currency appreciation by other Asian currencies are.

The vast majority of currencies unwound at least part of their oversold conditions over the last few weeks but their recent lows will need to hold on the next reaction if demand dominance beyond the short term is to be reasserted.

Country markets will have to be assessed on their individual merits in future rather than taking a broad spectrum approach not least because of the variability in currency performance which has become such a factor over the last year.

To what extent the Chinese Yuan weakens is likely to be the single most important factor for other Asian and commodity related markets. 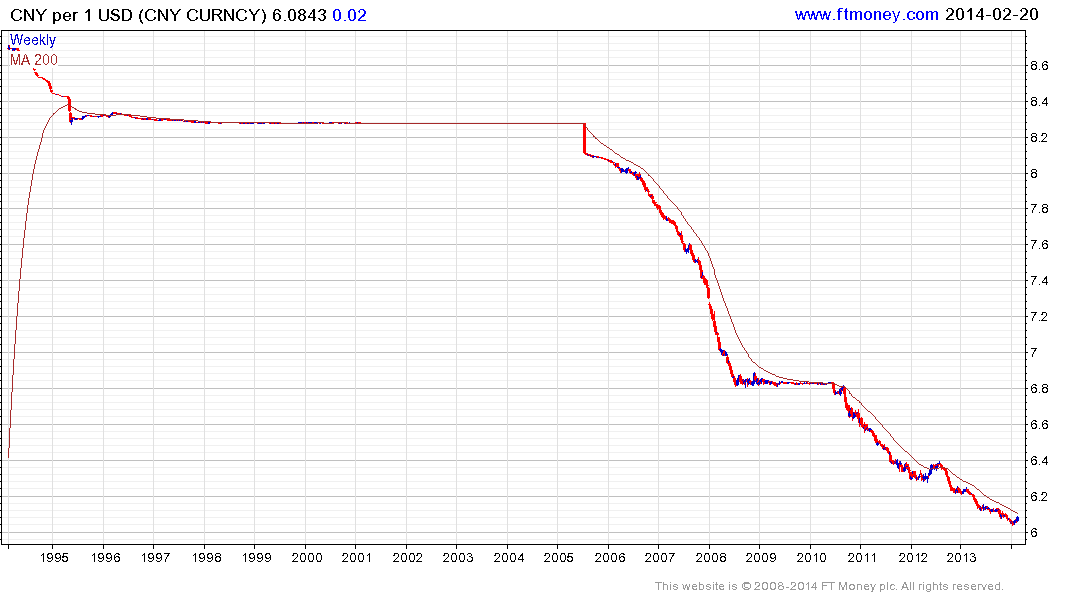