Email of the day on construction work, supply bottlenecks and Japan
Comment of the Day

Email of the day on construction work, supply bottlenecks and Japan by Eoin Treacy

Heard the construction work yesterday, hope you and the family will soon be peacefully settled in!!

A minor update on Japan.

Last year my Japanese portfolio performed well when the Nikkei was up , but this year, having tweaked my portfolio it performs in line with the Topix. Today was typical, percentage wise the Topix was up over double the Nikkei and my portfolio performed very well. Plus I think the Topix index will be the 1st to break it's psychological level of 2,000 before the Nikkei breaks the 30,000 level!! Take a look at the 10-year Topix chart, this year it has formed a perfect pennant, ready to pierce the 2,000 level. I believe the Topix is closer to following the 2nd section than the Nikkei.

Thank you for your well wishes and this topical email. Our contractor is back again today so I apologise if there is any banging in the background while I record this afternoon.

We bought a newbuild home foreclosure that had been sitting on the market for eighteen months. The builder had gone bust so the final touches on the home were rushed and the kitchen was left unfinished. As far as we can make out the reason the house sat unwanted for so long was the starting price was too high back in late 2019 and the absence of a kitchen was a deterrent. There was also a leak in the dishwasher that led to significant mould growth in the kitchen island so that probably also limited demand.

We did exhaustive inspections before buying. We paid for a full home inspection, an electrician to diagnose issues and a plumber. Our conclusion was there was nothing we couldn’t fix and the price we were accepted at was at 60% of the average price per square foot for what is a very desirable neighbourhood.

We also used the detailed quotes we received from the inspections to negotiate with the selling bank so they would cover all of the closing costs. An additional bonus was the home insurance quote we received from Lemonade was half what we received from other companies. In the end, we had so much left over from unused closing costs that we shaved 0.25% off the mortgage rate to fix a jumbo loan for 30-years at 3%. A week after we closed, the newbuild across the street sold for $1 million more than we paid. 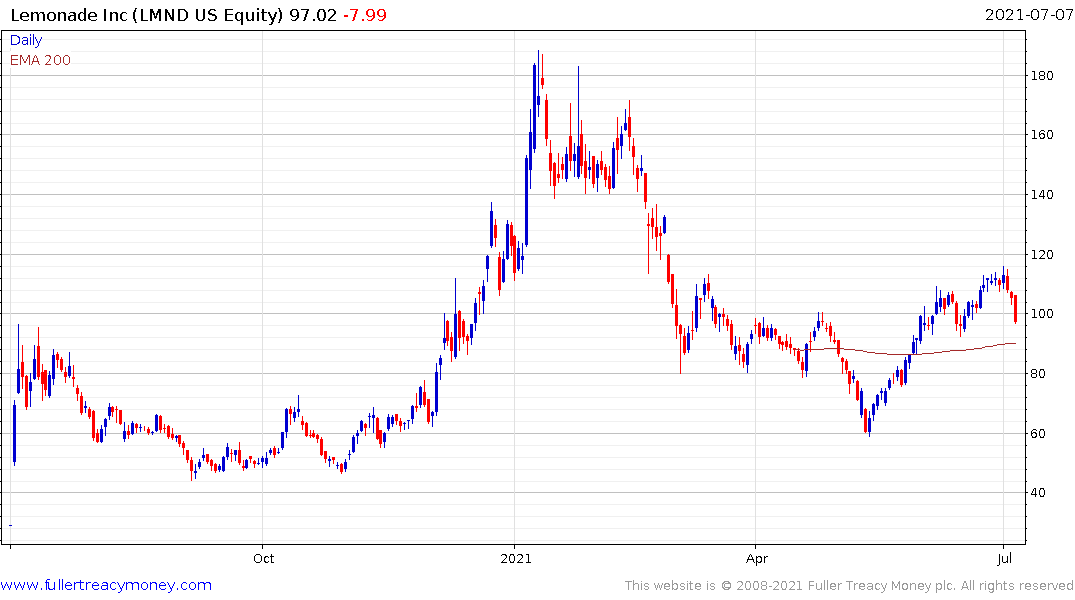 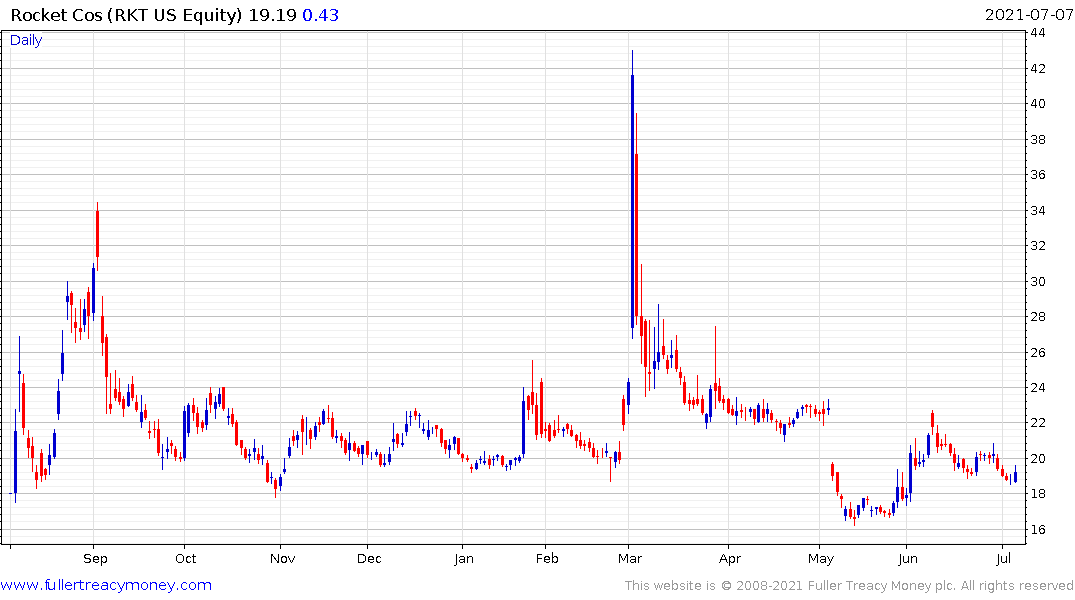 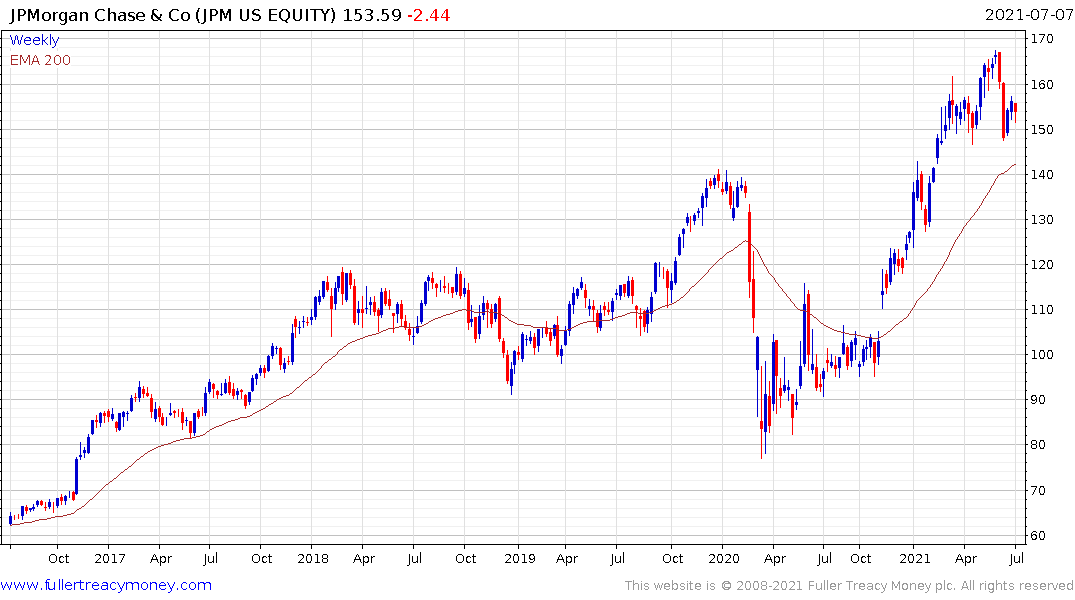 In sourcing a mortgage my first was Quicken Loans/Rocket Mortgage since they are dominant in the market. The service I received was subpar at best. Three weeks after my initial request they sent me a paper application form to fill in and return. Chase on the other hand had a simple online form to fill in and I had a half hour conversation over the phone with a mortgage banker to iron out questions. After that it was a relatively seamless process. The only thing they were insistent on was a 20% down payment. That runs contrary to all the anecdotal reports I’ve heard over the years about dealing with big banks.

I’m not a property expert but if loan to values are still in the 80% area, it suggests to me this is not a market that is about to peak. At market tops, mortgages are free and construction is a major contributor to economic growth. We might get there eventually, but we are not there yet.

We have seen first-hand experience of how the shortage of semiconductors is impacting supply chains. The Wolf/SubZero and Miele appliances we have ordered will arrive in increments starting this week and hopefully completing in November. In pricing swim spas, the lead time is anything from six months to a year instead of six weeks before the pandemic. The price to have gutters installed has been creeping up from $6.50 a foot before the pandemic to $7 when we were quoted to $7.50 at present and a proposed hike to $8 at the end of the month. Lumber might be falling but the price from contractors is only just beginning to moderate. 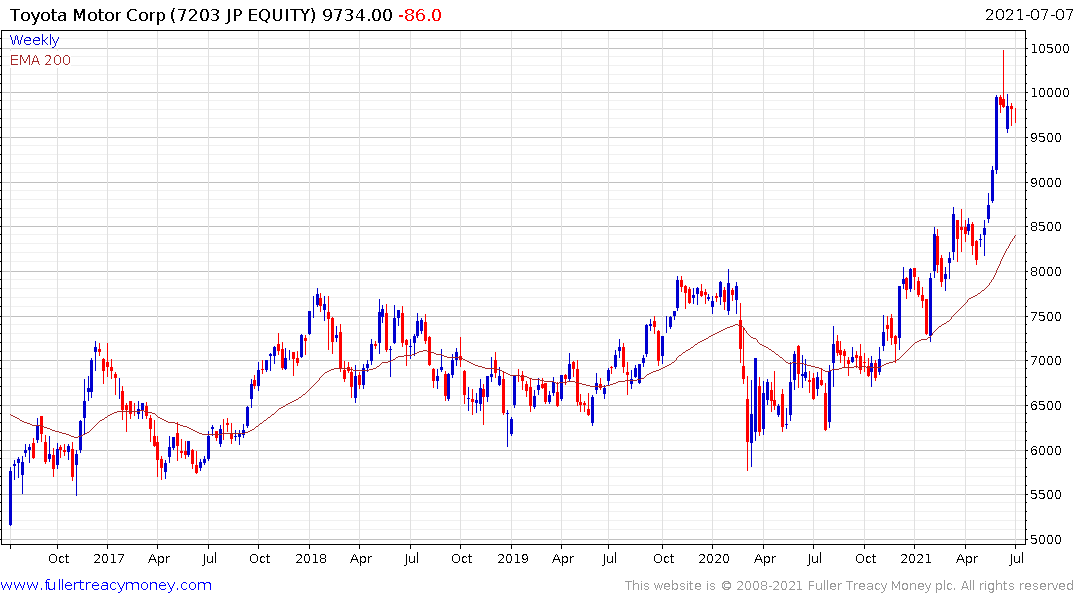 Speaking of supply shortages, Toyota began to hold more inventory after the Fukushima earthquake with the result that it has avoided many of the supply bottlenecks of its competitors. That allowed the company to surpass GM for top spot in US sales so far this year. It’s been decades since automakers held significant inventory of raw materials. After the pandemic shortages impacted sales, it is reasonable to expect they will hold more inventory in future. That suggests continued strong demand for commodities and a natural dip buyer over the medium term. 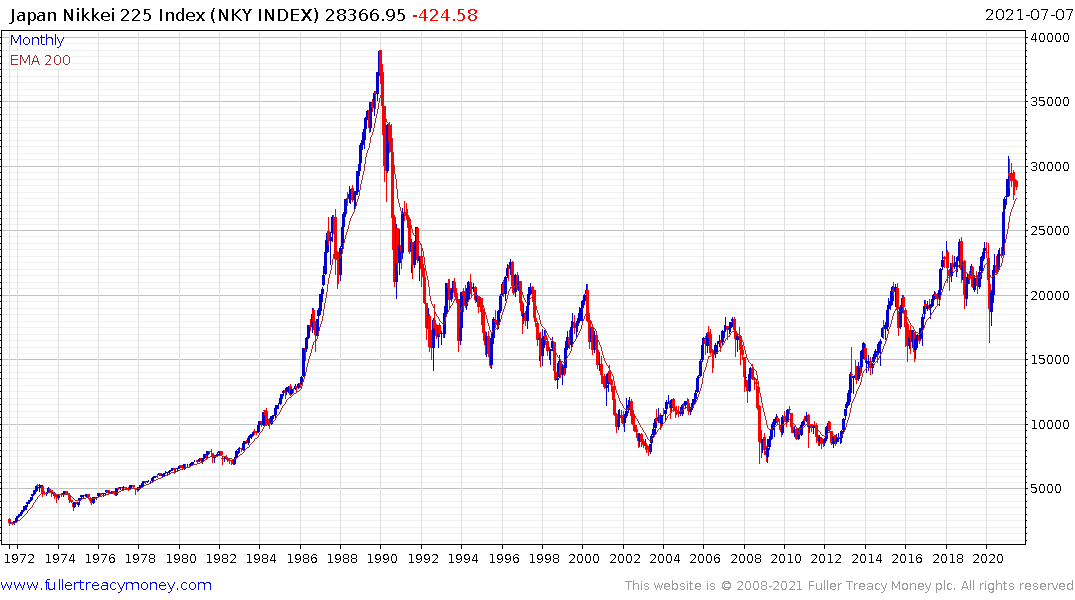 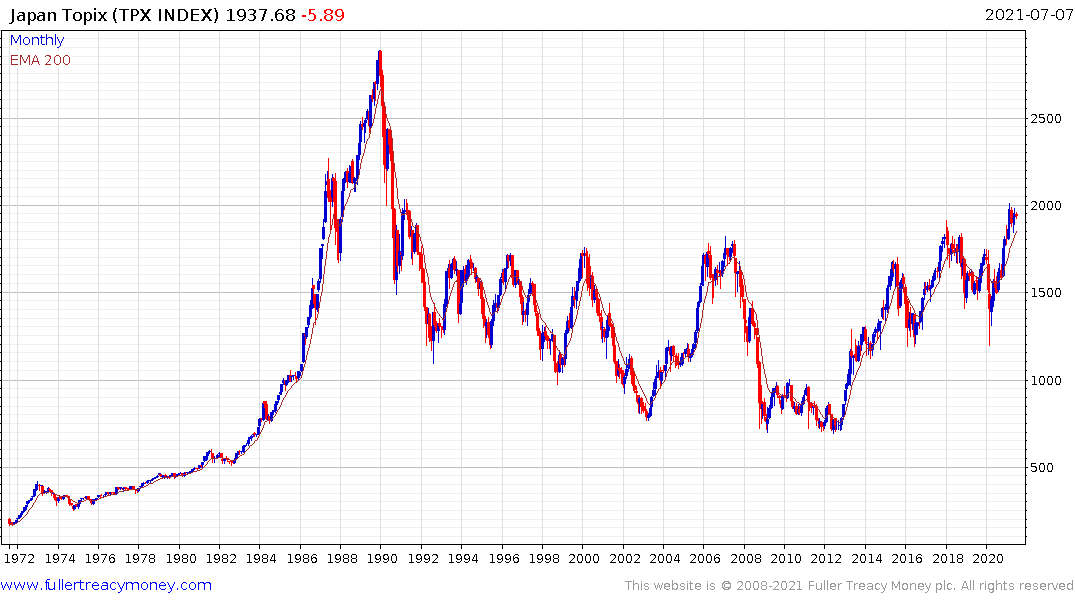 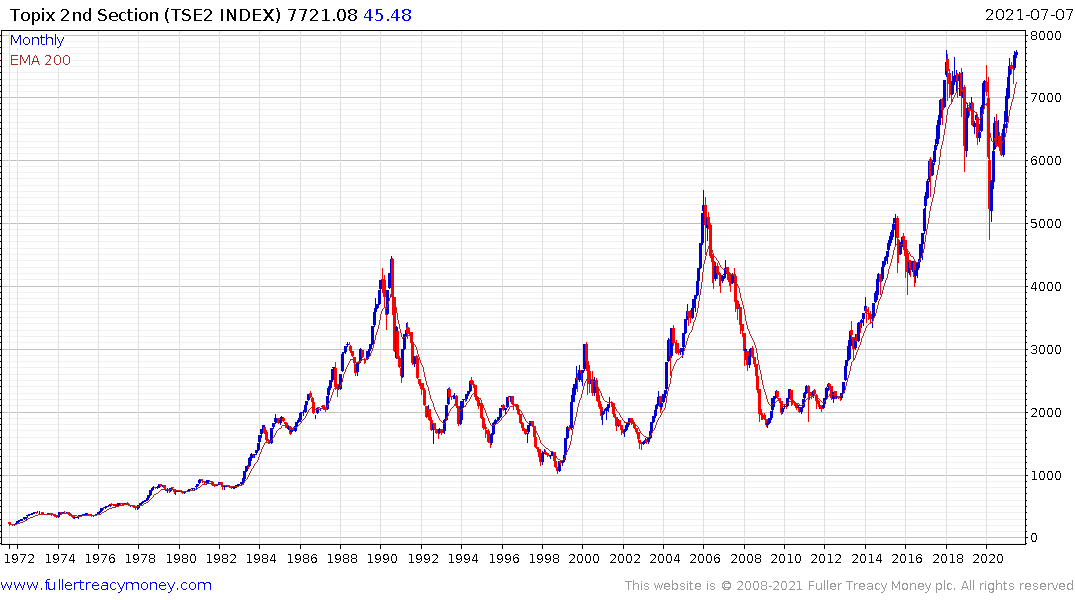 The Topix Index has first step above 30-year base formation characteristics. That suggests we should be open to the possibility that Japan is on the cusp of a major new bull market. The Topic is a market cap weighted index while the Nikkei is a price weighted index. That means Fast Retailing (Uniqlo) is 10% of the Nikkei while Toyota, Sony and Softbank are the three largest weightings in the broader index. As global growth recovers, I agree the Topix has potential to outperform. The 2nd Section Index of smaller caps continues to test the 2018 and remains on a recovery trajectory overall.