Your mention in today’s commentary re the third psychological perception stage of the market jogged my memory about an anecdotal comment you made some time ago, probably going back at least 2-3 years. Given the time the has passed since, the exact details are a bit vague, however I recall you mentioning that you had been talking some trustees of, I think, University endowment funds, or some similar funds, and that they were at the time sitting on large amounts of cash, and were not heavily invested in the market. The implication was that despite a number of years of good returns in the stock market since the bottom in 2009, people were still nervous about returning. I wonder if you have any indication as to the current state of affairs and whether such funds have become more invested in the market or whether there is still a sizable amount of cash on the side lines. Thanks

Thank you for this question which may also be of interest to other subscribers. That meeting was approximately 1 year ago and due to the pace of bureaucratic change that particular endowment is only now getting around to progressing with changing its investment mix from 100% cash to a more balanced portfolio.

This topic of an unloved bull market also popped in Jeffrey Saut’s missive this morning. Here is a section:

Shortly thereafter, a portfolio manager sent us this quip from Bloomberg: For years you used to hear people call the rally in stocks "the most hated bull market of all time."  It caused ire for various reasons: some people were under-invested, others just thought that we hadn't solved the underlying issues that caused the crisis, and maybe a few were just upset because they didn't like President Obama or the Fed.  You don't hear that phrase too much anymore, but I wonder if soon we'll be able to talk about "the most hated economic expansion of all time."  Once again, you have a lot of people who, for whatever reason, are predisposed to thinking that a downturn is coming.

Some think the tariffs will cause a recession.  Others worry that U.S. capacity is near maxed out and that the timing of the tax cuts was irresponsible.  Some just don't like President Trump.  Others may just be thinking that the economic expansion is getting long in the tooth.  But in the meantime, there's a lot of good news out there.  Corporate profits on a pre-tax basis are growing at their fastest pace in seven years.  Consumer confidence is absolutely soaring by multiple measures.  And arguably, U.S. households are just getting warmed up.  Remember, household savings were recently revised up and are substantially higher than the pre-crisis period, meaning those same exuberant consumers may have untapped spending power.  Toss in a loosening of consumer credit standards into the mix, and it's not hard to imagine this expansion having more legs.

Our comment, “Well said!”  And to all disbelievers, we are reminded of the famous Groucho Marx lament, “Who are you going to believe, me or your own eyes?!”

Some of the biggest buyers of stock in this bull market have been companies through their various buy back programs. If the conversations I have had with just about everyone are any measure, retail investors are also well represented. The issue of university endowments, which have formerly been entirely risk averse, now preparing to enter the market is a symptom of people seeing the gains and thinking if they do not buy now they will be miss out forever. The more prices rise the greater the pressure there is to buy for fear of missing out. That is what the third psychological perception stage of a bull market is all about.

Just as with every bull market those who are on the bearish side will be seen as eternal pessimists, purveyors of doom and gloom and flat out wrong until the market turns. In a bear market these same people are lauded for their foresight. Such is the fickle nature of the crowd. 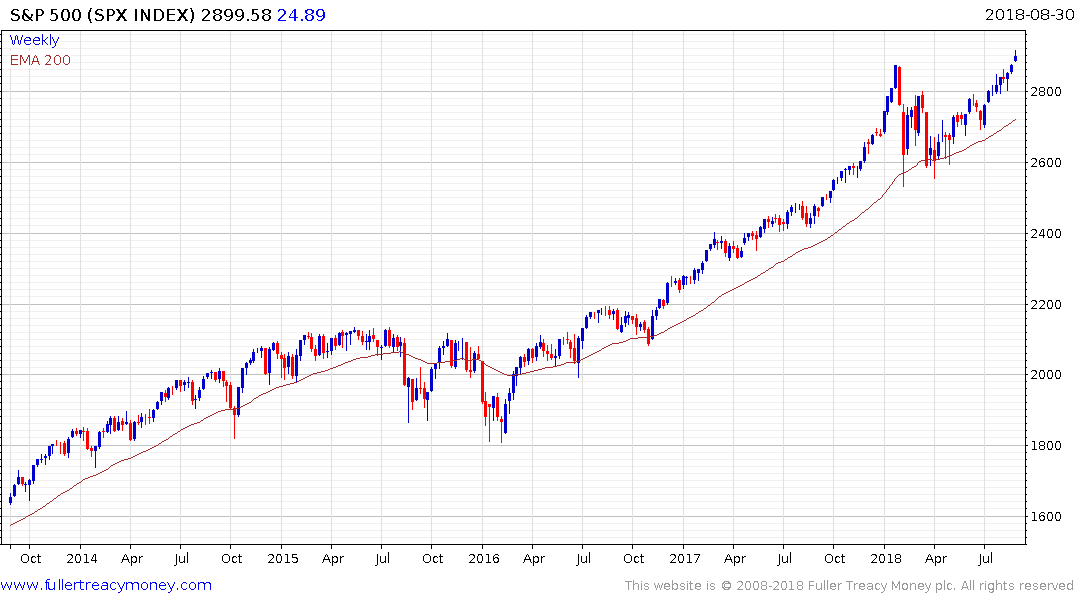 There is no doubt Wall Street was due some consolidation in January which is why I was looking for a medium-term correction. The continued boost to corporate earnings as well as the relative strength of the US economy relative to just about everyone else has ensured the range persisted for just over the lower duration of the six to eighteen-month window a medium-term correction can persist for. A sustained move below the trend mean would be required to question medium-term scope for continued upside.