Email of the day on bottoming characteristics:
Comment of the Day

Email of the day on bottoming characteristics: by Eoin Treacy

Thanks for answering my question here. Eoin, which primary trend ending would you most likely expect to see following the current melt down? Is there an ending that presents itself most frequently following this very very rapid collapse in markets?

Thank you for this question which I believe the majority of investors are pondering at present. The top put in over the last 18 months has Type-2 characteristics. 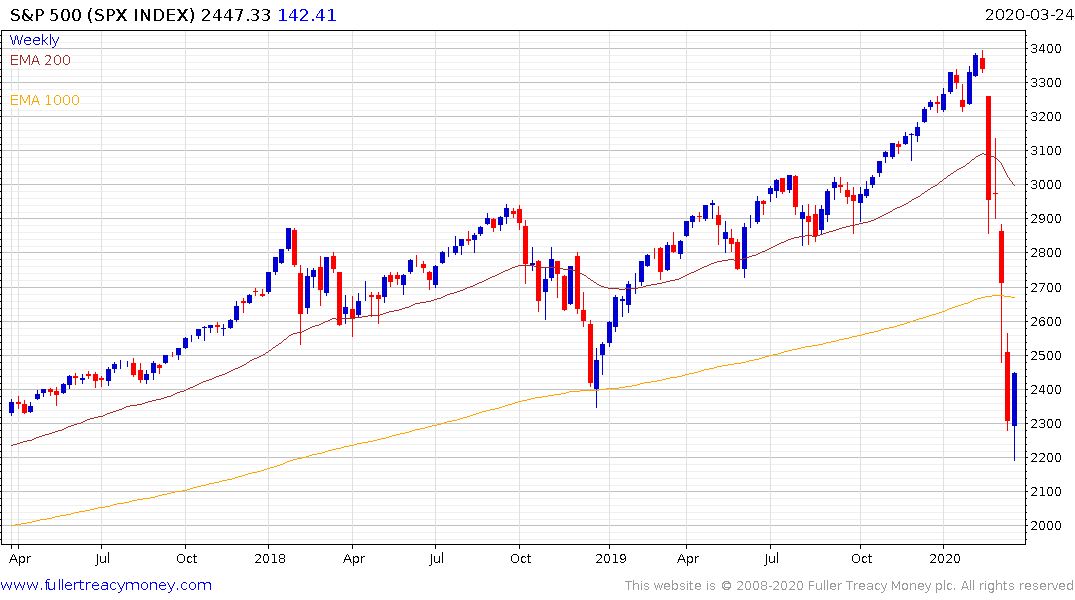 The swift pullback in Q4 2018 was in hindsight a loss of consistency at the penultimate peak for the S&P500. The failed break above 3000, with the dynamic of the failure being larger than the dynamic of the breakout, took the market back down to test the lower side of the underlying range and then it broke below the lows near 2500.

Following this massive reaction against the prevailing trend the S&P500 is 28% below the 200-day MA. That is a sufficiently wide overextension to give some credence to potential for a reversionary rally. Type-2 tops are jarring to sentiment and surprising in their ferocity. This one has been both particularly swift and deep.

There are three psychological responses.

The first is for people who have been conditioned to buy the dip. They will have learned over the last decade that the gains have come from stepping in during occasional bouts of weakness to initiate longs. That has been particularly true for investors in FAANG stocks which is one of the reasons they have continued to be such strong relative performers.

The second will be for institutional investors to call emergency meetings. (I’ve neem party to a number over the last couple of weeks). There is always someone who is risk tolerant and wants to deploy cash but there is always someone else who wants to only invest in money market instruments. The conclusion is almost universally to wait before taking any drastic decisions. That wait and see approach from investors who were buying for the last decade, removes a source of demand from the market.

The third will be the legions of people who have taken no action. They are quickly learning that markets can move faster than they can react so whenever we get a good rally, they will use that as an opportunity to reduce their exposure.

These competing factors are why type-2 tops are often, though not necessarily, followed by ranging. The big point is some of the least affected shares are likely to post V-shaped recoveries. However, the wider market, where there is still a lot of uncertainty about the health of small to medium-sized businesses, is going to take longer and is therefore more likely to range.

To stop the decline, we need to see some clear strong upward dynamics, that break short-term sequences of lower highs, and pressure shorts. That will help to unwind overextensions to the 1000-day MA (now at 2675) and/or the 200-day MA (now at 3000).

So, has a process of mean reversion started? Another day on the upside like today would certainly help to support that view because it would break the month-long sequence of lower rally highs.

The big question is how well stocks will be able to sustain moves above their respective 200-day MAs following a reversionary rally. If the S&P500 demonstrates resistance at those levels it will confirm at least a lengthy medium-term peak.

On the other hand, if the lows hold and we see some ranging that eventually sustains a move above the 200-day MA that would support the view this has been nothing more than a lengthy medium-term correction in an ongoing bull market. The extraordinary efforts of central banks and governments are aimed at delivering that outcome but the consistency of the previous uptrend has been severely compromised so it is a mammoth task. 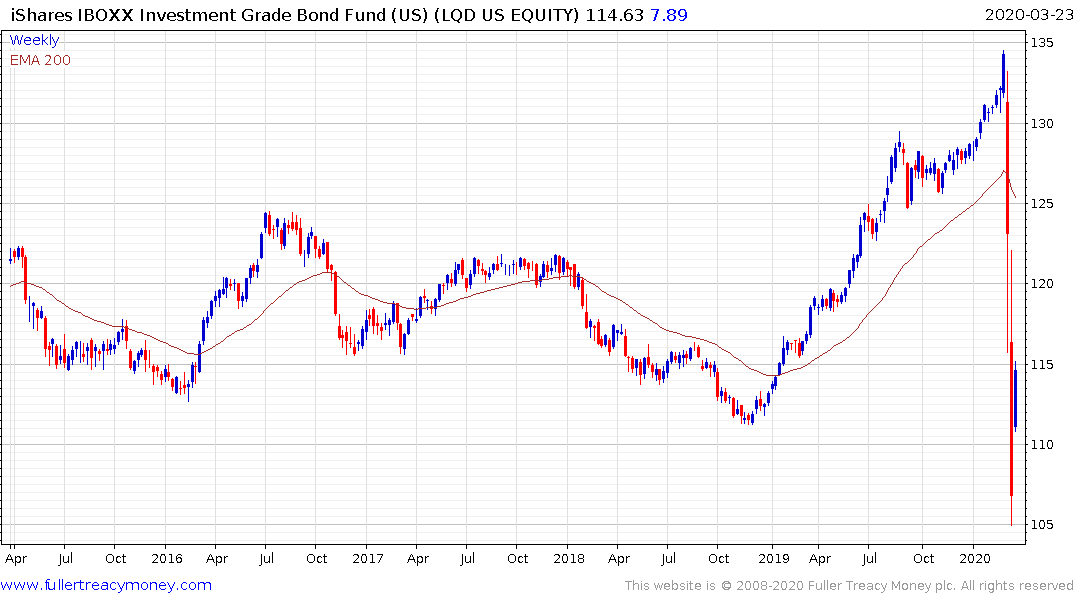 The actions announced by the Fed over the last 24 hours to initiate purchases of corporate bonds is going to set off a scramble among companies to retain their investment grade rating at all costs. The first victim of that effort is likely to be the buyback program, then the dividend and then slimming down of ‘non-core’ assets. GE went through that process and ended up having to sell the crown jewels, its consumer finance arm, to remain afloat. 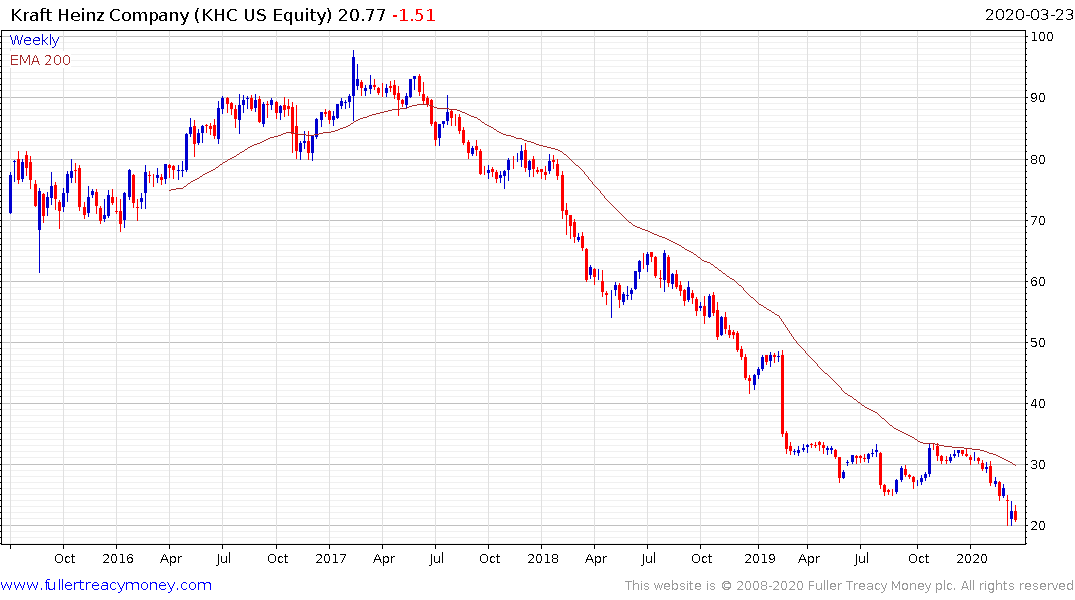 Additionally, the tolerance of investors for “intangible book value” is now at zero. After an almost 80% decline, arguably Kraft Heinz’ 10% free cash flow yield has been excised of meaningless valuations. 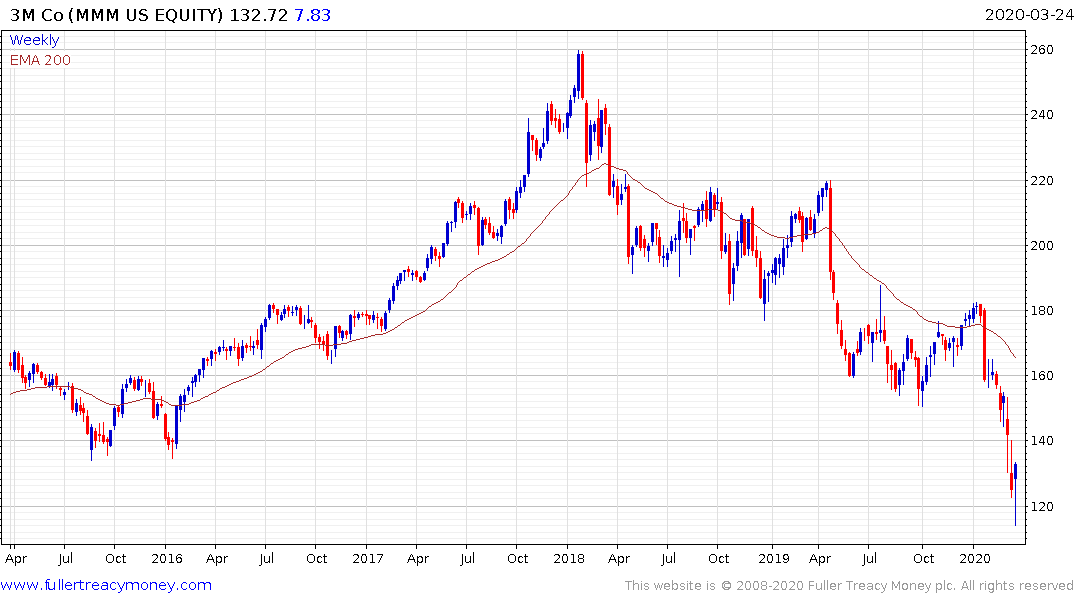 3M halving over the last couple of years is another example of where valuations have improved considerably and this process of rationalization is nearing a conclusion. 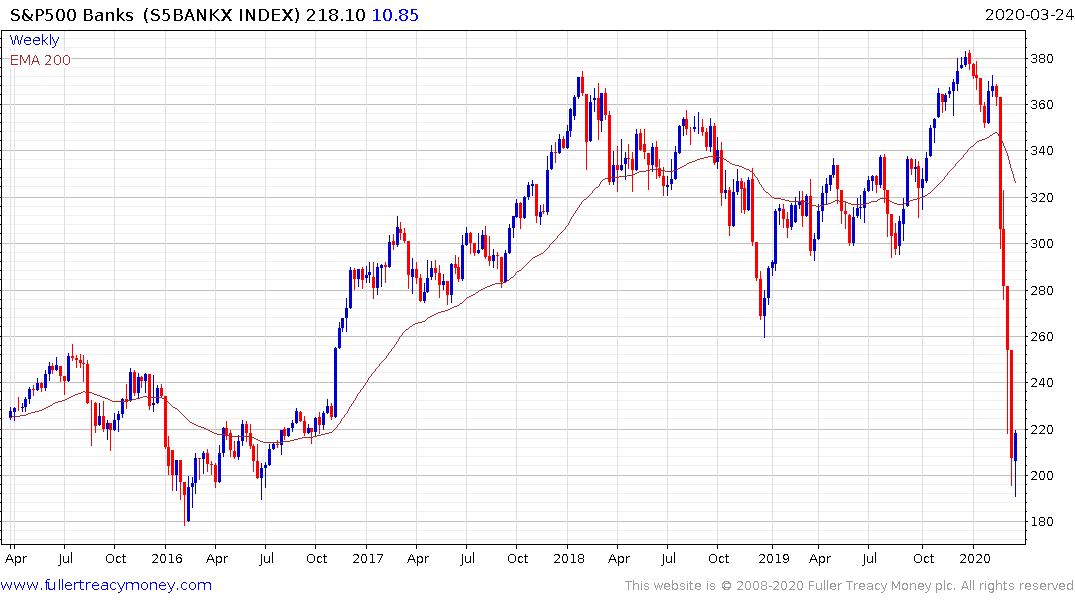 For many other companies it is just beginning. Banks in particular have been buying back shares because they have been inhibited from increasing dividends. They also have deep short-term oversold conditions but with liquidity constraints, margin constraints and exposure to defaults it is hard to figure out how they are going to make money.