Email of the day on bidding below the market.
Comment of the Day

Email of the day on bidding below the market. by Eoin Treacy

Thank you, Eoin, for your work and sincerity about your portfolio. If I understand correctly, you have bids under the spot for gold due to probability that the yields shoot higher, consequently pressing the gold further down?

If that's correct, would you argue the same for BTC/ETH?

Thank you for this question which may be of interest to other subscribers. After the flash crash in 2010 it became clear that short-term outsized moves are not only possible but also likely.

The vast majority of trading is now algorithmically based. My central point is that an algorithm can be taught what to buy using an infinity of different metrics. However, there is only a very small number of ways of telling a computer how much to buy. That’s particularly true when we are talking about very short-term trading. It basically comes down to volatility and interest rates.

This limitation in how positions are sized creates herding activity in automated markets in just the same way we would expect from human controlled markets.

Additionally, gold is an idiosyncratic asset class. It responds to different stimuli at different times. Anyone who has traded gold for any amount of time will be familiar with the fact that it can and does anything. 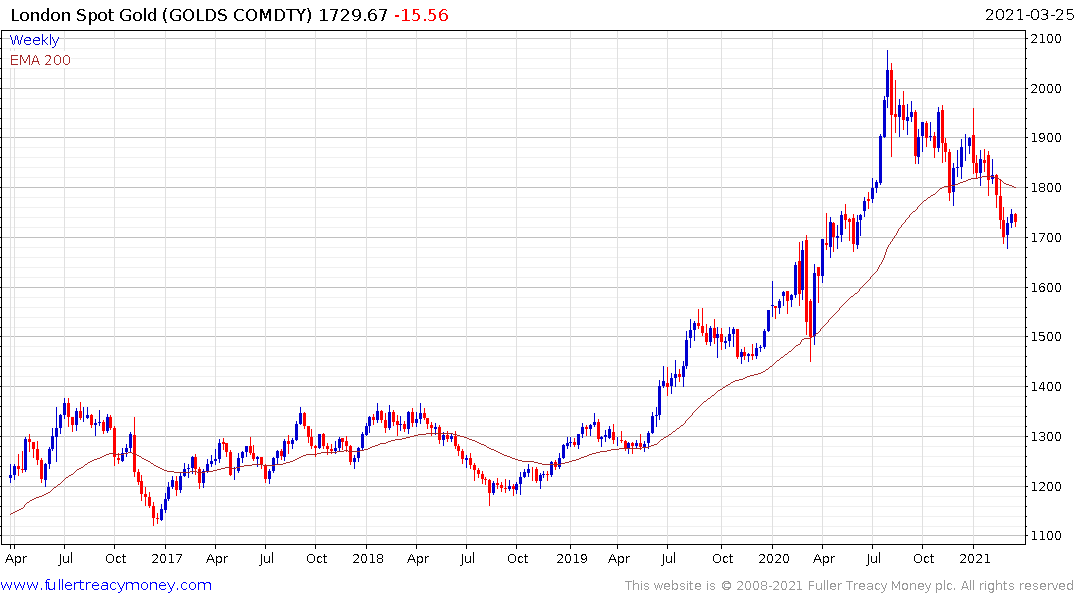 I remain convinced gold is in a secular bull market but it is prone to volatility. The logical course of action is to try and buy it as cheap as possible. My strategy to achieve that is to have bids significantly below the market at levels I believe would represent undeniable bargains.

That raises an important question for me about bitcoin. Is it in a secular bull market? I don’t know. There is no doubt that it is new and growing increasingly large. I even think that the underlying idea of distributed ledgers is a good one but I don’t believe bitcoin is the asset that will achieve those goals. Instead, it is a way of speculating on declining faith in the ability of central banks to preserve the purchasing power of currencies.

This is a particularly relevant time to think about where bitcoin might bottom. Today’s downward dynamic would have triggered a Mid-Point Danger Line )MDL) stop.

Consistent trends are trends in motion. The most consistent thing about bitcoin’s trend was the staircase sequence of ranges one above another. Every time one of the ranges was completed it kept going and every breakout was dynamic. That was true all the way up from the low in March to the peak two weeks ago.

The latest breakout was not sustained. That was an inconsistency. It could have held in the region of the upper side of the range and broken out, but today’s breakout debunks that idea. When a consistent trend pierces an MDL stop it is no longer consistent. That tells us the imbalance between supply and demand that drove the advance is no longer present. It is now logical to conclude bitcoin is about to become much more volatile and difficult to make money from.

Bitcoin is capable of creating beautifully consistent trends that are reasonably easy to trade on a risk adjusted basis. I will not trade bitcoin outside of these trending phases. Instead, I will become interested again when it returns to test the 1000-day MA which today is at $10,547.

I continue to believe that Ethereum is high-beta bitcoin. It has shown no evidence of being able to trend independently of bitcoin. The price failed to breakout and has now posted a lower rally high. The trend is now even less consistent that bitcoin’s.