Thank you for your superb service. Can you please advise your views on how vulnerable do you think the pharmacy shares are in the US after Amazon's entry to the field? Thank you in advance.

There are obvious fears that the introduction of Amazon’s business model to the pharmacy sector will have the same effect it had on the big retailers. However, I suspect the most profound effect will be felt among the smaller independent pharmacies that command about half the total US market. Here is a section from an article by bizjournals.com that may be of interest:

There are currently about 22,500 independent pharmacies in the United States, and these pharmacies dispense nearly half of the nation's retail prescription medicines, Norton says.

All told, independent pharmacies are an $81.4 billion marketplace annually. They fill 1.38 billion prescriptions a year — about 201 a day, per pharmacy — and employ 314,000 people on a full- or part-time basis.

Companies like Macy’s are still around and they have certainly had to adjust to the reality of online competition. What gets less discussion is the evisceration of the mom and pop retail sector which has all but disappeared from the retail landscape. There is real potential local pharmacies will not have the financial wherewithal to combat the delivery and price competition Amazon is capable of bringing to the market. Amazon is currently advertising for people to take part in what is effectively a delivery franchise operation so it is expecting to be doing a lot more deliveries in the coming years. https://logistics.amazon.com/ 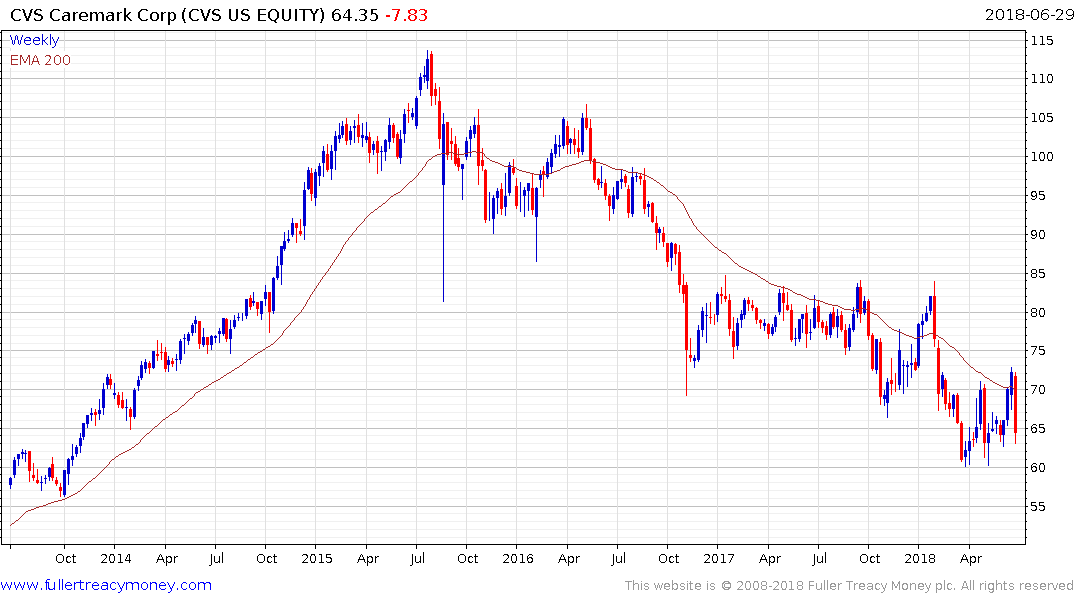 CVS Health has been trending lower since 2015 and will need to sustain a move above the trend mean to begin to question the medium-term downward bias. 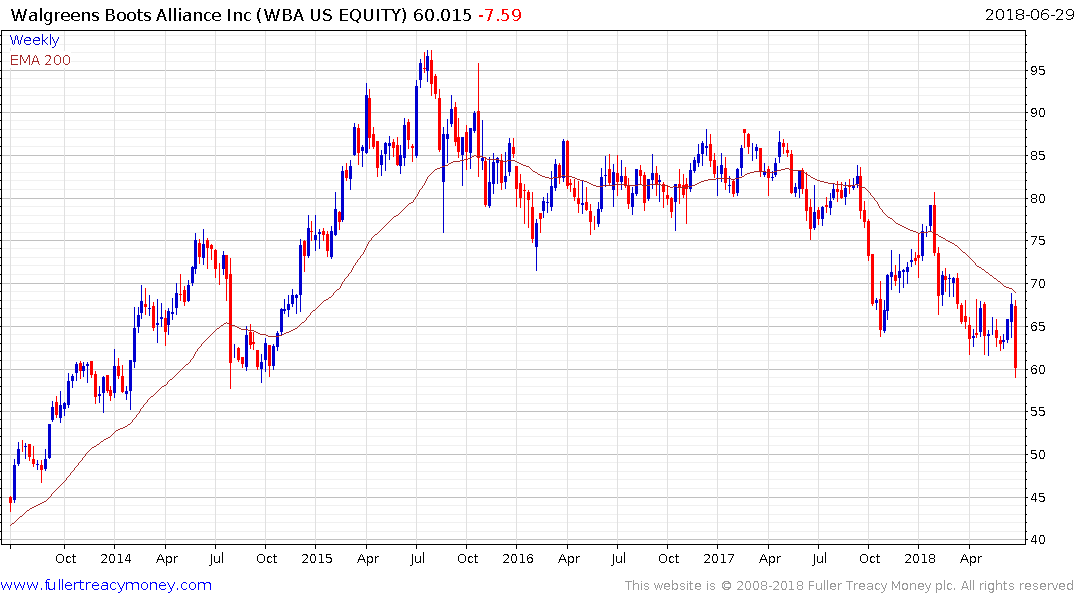 Walgreens Boots Alliance may have been admitted to the Dow Jones Industrials this week but it remains in a consistent medium-term downtrend. 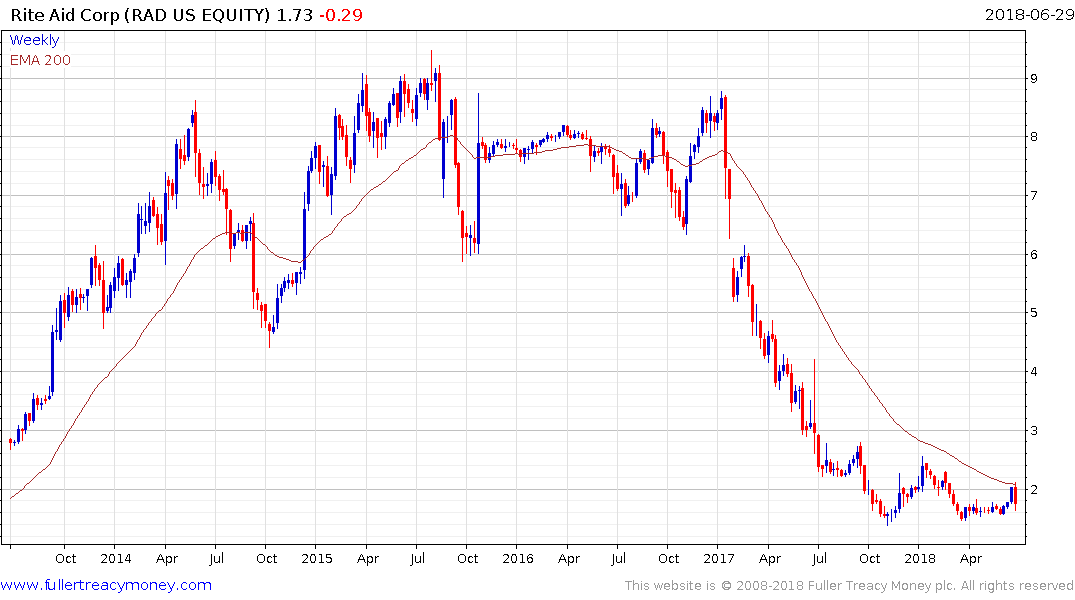 Rite Aid is barely steady as it ranges above the 2017 low. 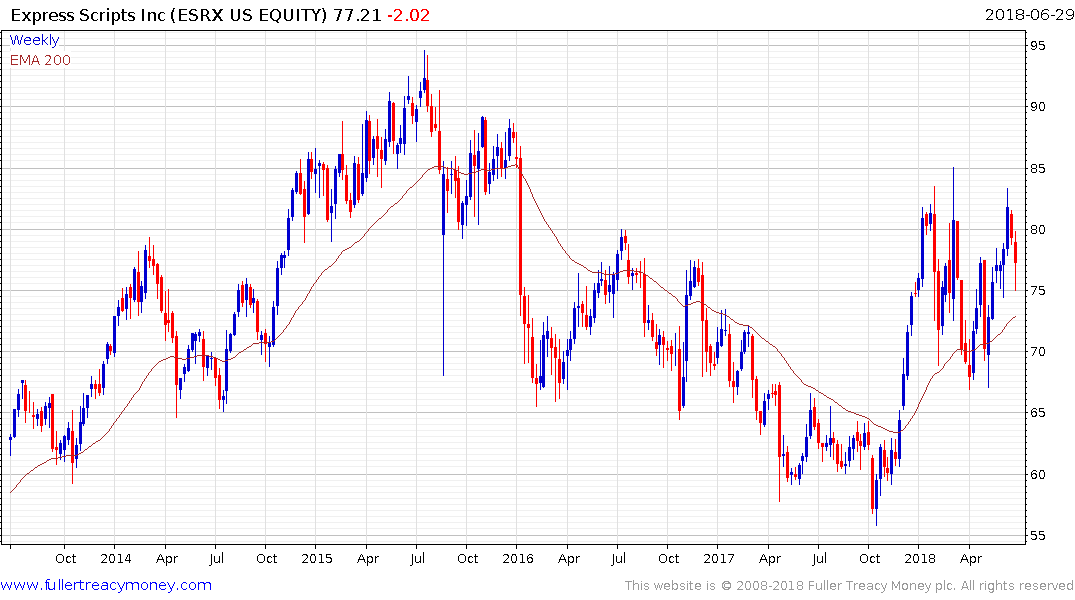 There are two large mergers outstanding in the sector (Aetna & CVS, Cigna & Express Scripts) which reflect the eagerness of health insurers to combat Amazon as an interloper in the pharmacy sector. The represents an additional expansion of the services insurers offer but I wonder where the retail operations of companies like CVS fit into the reasoning.