Email of the day on a potential Autonomy:
Comment of the Day

Email of the day on a potential Autonomy: by Eoin Treacy

“I was wondering if you would consider Luxottica Spa as a possible autonomy? It is a leader in Asia, I believe and it has become a dominant player, could you take a look at this? Thank you in advance”

Thank you for this email which others may also have an interest in. We define Autonomies as companies that are truly global in nature, dominate their respective niches and have generally strong balance sheets.

As the largest seller of eyewear Luxottica certainly dominates its niche primarily through its Sun Glass Hut stores. While the company is not a monopoly, it certainly counts as the dominant member of a small oligarchy. The US and Canada still dominates in terms of its focus, accounting for 58% of revenue, with Europe at 18.5% and Asia at 12.7% in 2012.

The company cut its dividend during the financial crisis but has been growing it at 18% per annum since 2011 and the share currently yields 1.48%. I did not add it to the original cast of Autonomies because it was so US focused but there is a legitimate argument for its inclusion because of its dominance of its sector. 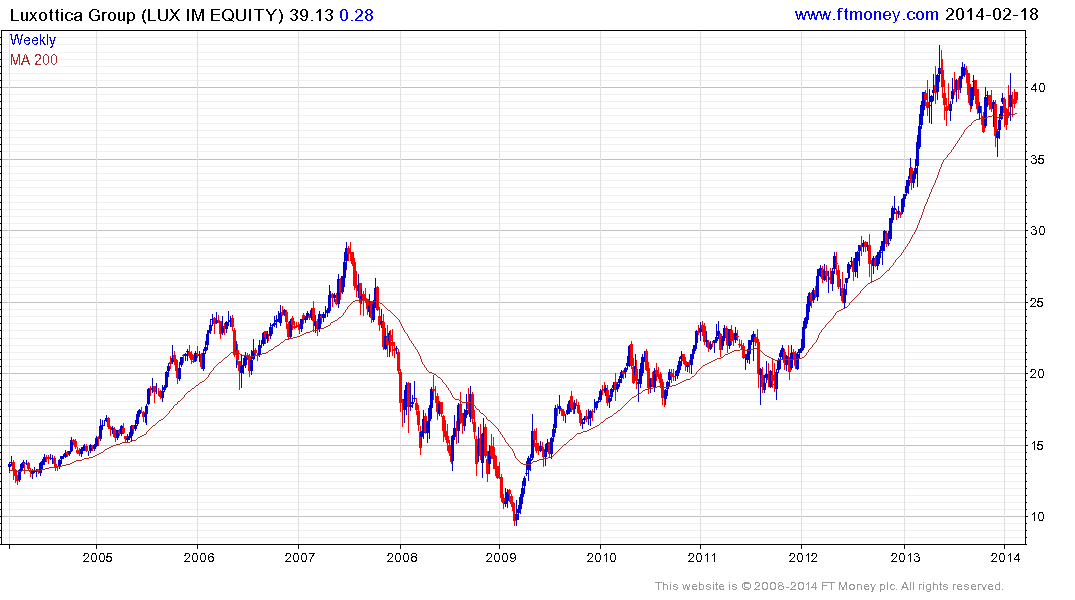 The share rallied impressively from the 2009 lows, finding support in the region of the 200-day MA on successive occasions. In line with much of the luxury goods sector, valuations had become rather stretched by early 2013 and the share has lost momentum somewhat since. It will need to hold above the December lows near €36 if potential for additional upside is to continue to be given the benefit of the doubt.