Email of the day After Brexit
Comment of the Day

Email of the day After Brexit by Eoin Treacy

The Brexit deal has made me think of David Fuller a lot in recent days. I shared several wonderful lunches with him in London at which his view on Theresa May's handling of the negotiations was quite clear! I think he would have been delighted with the unexpectedly good outcome (for the UK and the EU). Oddly, the deal has helped me at last come to terms with David's death. Knowing he would be happy makes me happy.

The attached article on the UKs economic prospects surprised me for its positivity, especially the massive amount the UK is predicted to pull ahead of France. Here is section:

By 2035, UK GDP in dollars is forecast to be 23 per cent more than traditional economic rival France.

Douglas Williams, the deputy chairman of the CEBR, suggested Britain's digital sector would flourish in the coming years.

'People often forget that the UK's largest economic sector is digital and creative,' he said.

'We have a huge competitive advantage in this tech-based sector which the pandemic has kicked forward.

'Most of this is pretty Brexit-proof provided the UK continues to attract talented people.'

Moreover, this CEBR analysis was made before the Brexit deal was announced, so maybe the prospects are even more positive now.

The key question for us investors is which London-listed companies are best placed to capitalise on the great opportunities ahead.

I hope you are well and had a relaxing Christmas.

This article (attached) today in the Telegraph added some interesting facts about the UK's trading future post-Brexit. It also seemed to cut across your own recent remarks about the future of the EU and the possibility of the Euro becoming the dominant reserve currency. The graphic was particularly revealing.

Thank you both for these articles which may be of interest to the Collective. We had a very enjoyable Christmas and played a lot of Mahjong. The Far Niente, panettone, Colin Street Bakery fruitcake and left overs have all been polished off and we’re starting to get back onto an enjoyable blend of epicureanism and ascetism.  I’ve been thinking a lot about David too over the last few weeks. I think he would have wholly approved of Boris Johnson’s tough negotiating stance and the commitment to follow through on the Democratic will of the people.

The world is full of opportunity for any company or country willing to compete. The UK is full of people who are willing to look on the positive side of the Brexit debate; with a view to gaining global market share for their individual enterprises.

The big questions will be on the leeway available to the government in the short-term to spur investment and speculation. We can anticipate that trade deals with Canada and Australia will be signed in the near-term but bigger deals with the USA, Asia or Latin America will take considerably longer. Meanwhile, the UK is unlikely to do anything to support the Pound in the near term.

The point to remember is that stock market investors buy companies rather than countries. The UK stock market has a large cyclical weighting. The largest companies tend to be energy producers, miners, banks and consumer businesses. The economy might be highly service oriented but the stock market is heavily skewed to global growth. With global reflation still the base case for 2021, there is clear scope for the UK stock market to move to clear outperformance. It will be aided by the valuation discount it is currently trading on. 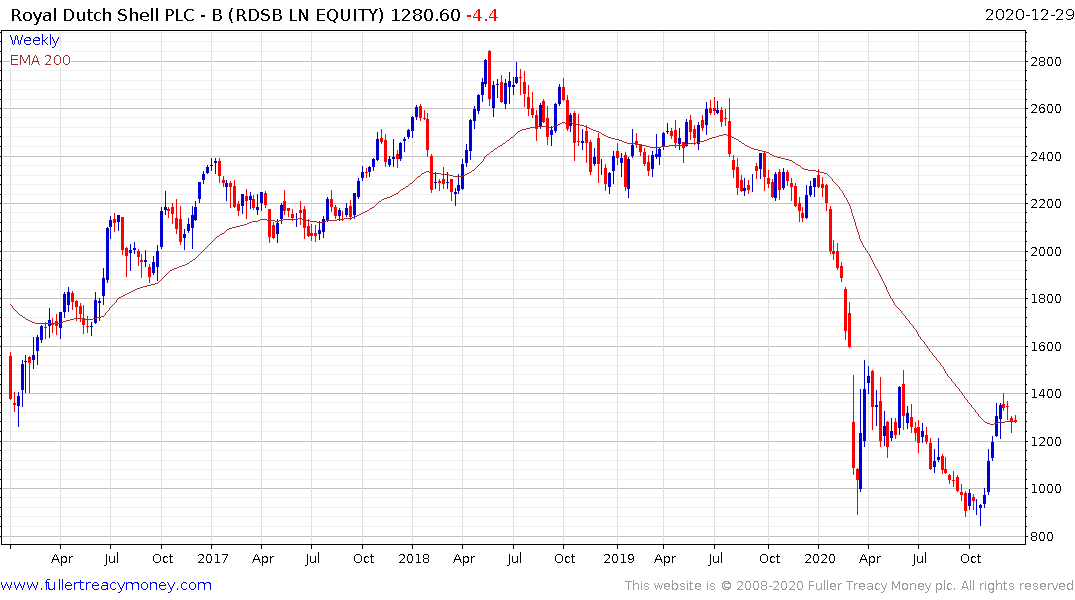 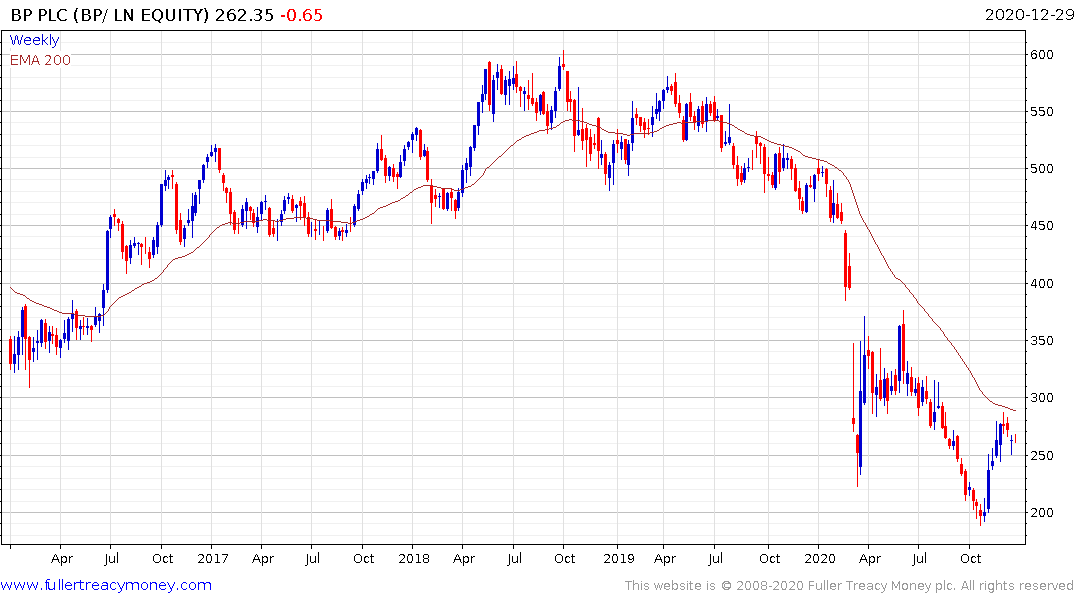 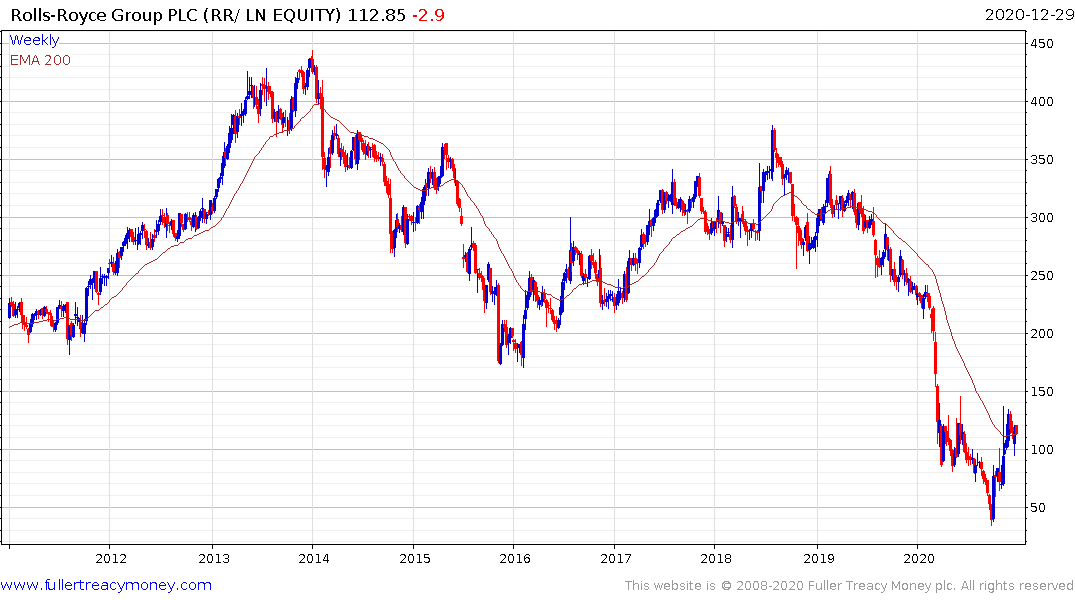 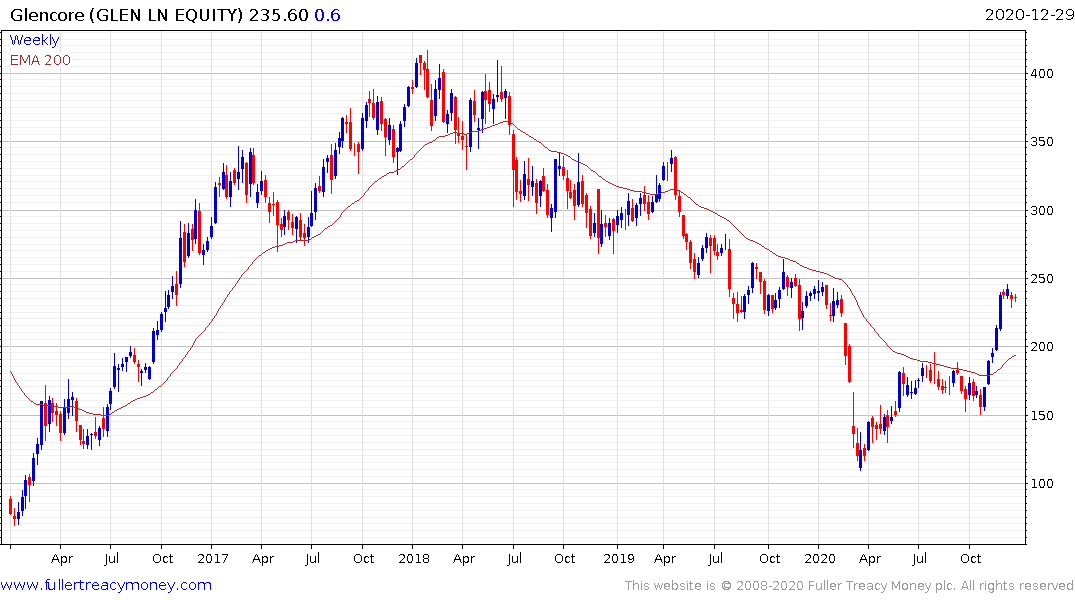 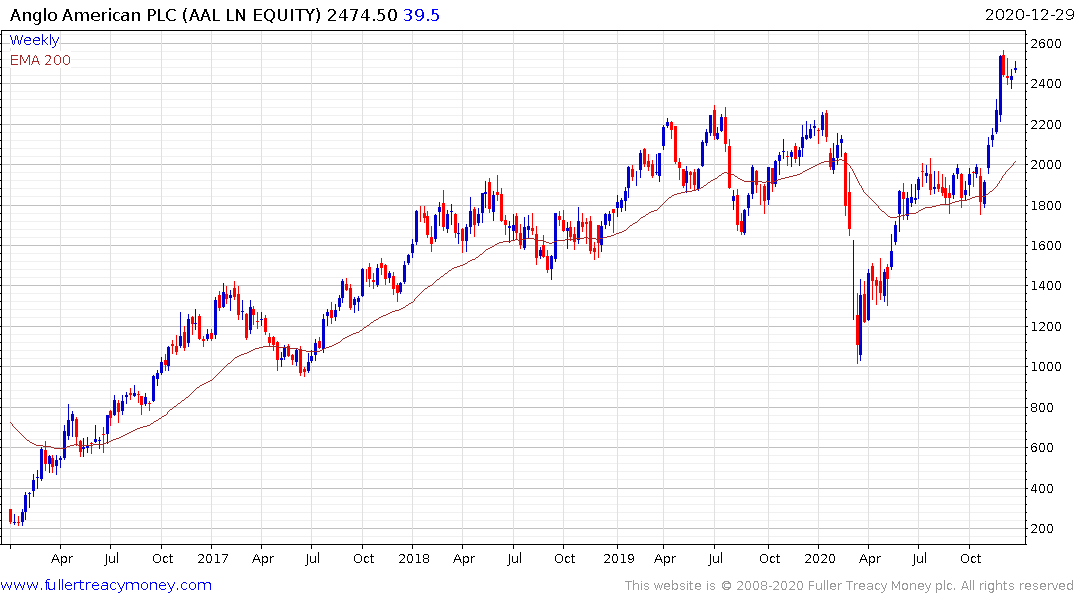 I created a value screen for value. I looked for UK companies with a price to sales ratio less than 1, market cap of more than 100 million. Forward P/E less than 12 and cash generated to cash required greater than 1. There were 43 results. 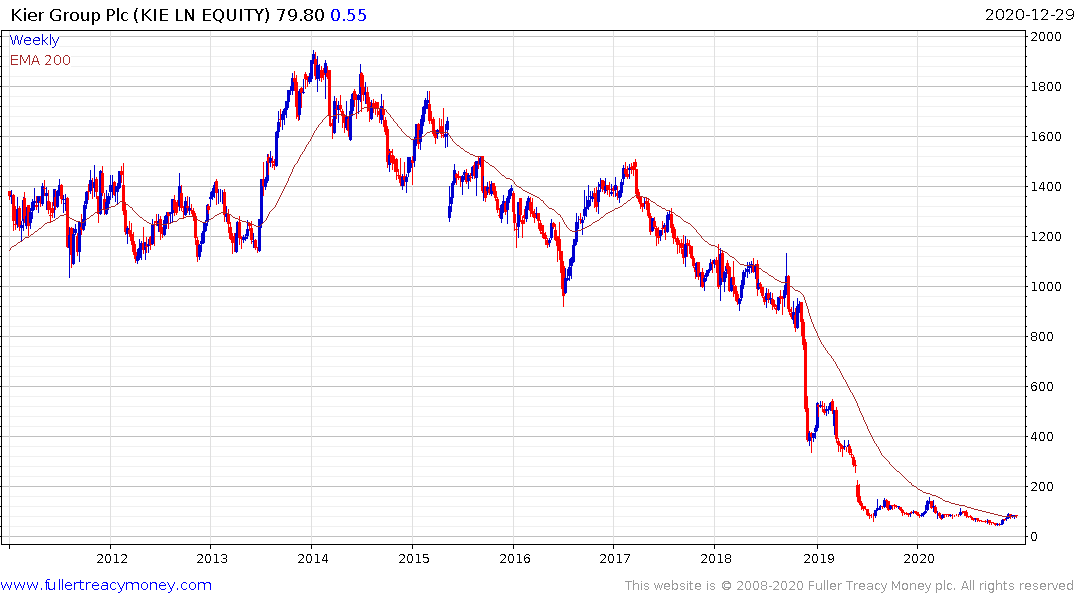 Kier Group is a commercial/government/utility builder trading on an estimated P/E of 2.4, Price/Sales of 0.04 and a current market cap of £128 million. The share is currently firming from the above the trend mean. 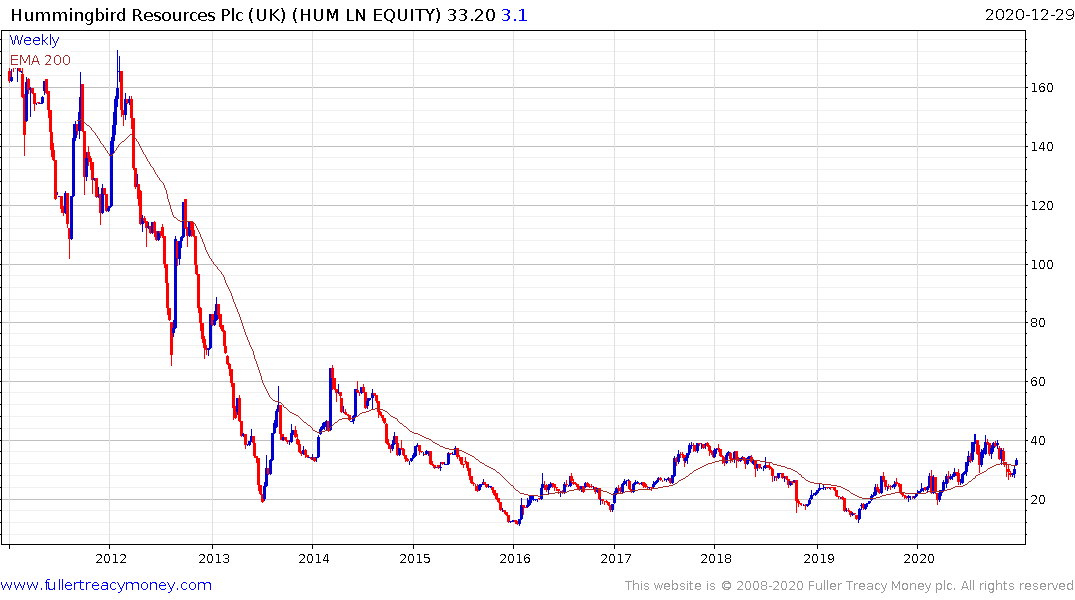 Hummingbird Resources is a gold miner with assets in Mali. The share has a market cap of £118 million, forward P/E of 6.4 and price to sales ratio of 0.9. It is currently firming within its seven-year base formation. 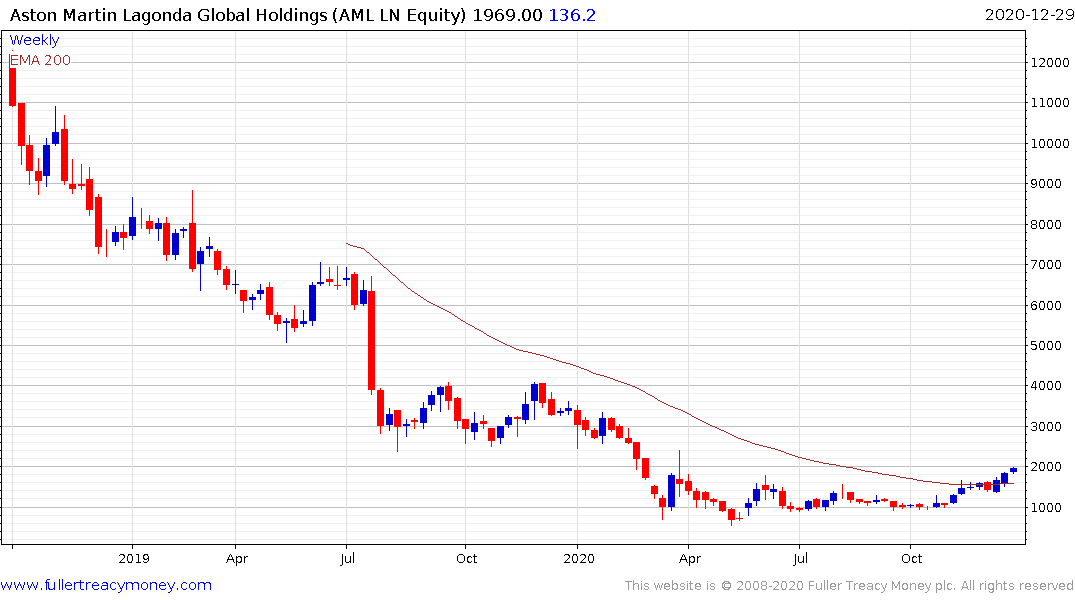 Aston Martin is not a value proposition but its return to Formula 1 racing and acquisition of Sebastian Vettel may help the share complete its base formation.