Email of the day (1) by David Fuller

"If the scandals and suspect computer modeling weren't bad enough, this might be a (the?) final nail.."

"Who doesn't love a good conspiracy theory, especially when it concerns experts in white coats tending a machine of incomprehensible power probing questions of fundamental importance to mankind. But enough about HFT.

"By my estimation this must be about the twentieth time the denier establishment has announced with shrill delight the revelation of yet another incontrovertible proof that global warming is a hoax; the previous nineteen having been proven wrong, usually within days of being announced. Still, hope springs eternal, especially if you have a bad conscience about a life of conspicuous consumption.

"Will it be different this time? Let me paint a scene. A blog in German by Rolf-Dieter Heuerv, Director General of CERN, was translated by Google Translate and then edited by Nigel Calder (who famously stated in 1980 that within 20 years "the much-advertised heating of the earth by the man-made carbon-dioxide 'greenhouse' [will fail] to occur; instead, there [will be] renewed concern about cooling and an impending ice age". Presumably Nigel is now getting a little bit concerned about the accuracy of this forecast. ) This translation was then re-edited by the Finacial Post and then re-edited again by the Telegraph.

"Looking for climate science in the Telegraph is a bit like asking your mother-in-law for an honest opinion on your wife.

"Looking at the original CERN research there is a lot of work still to be done before any conclusions could be drawn about what effect changes in ion-induced nucleation might have or not have on global average temperatures. Presumably that is what Rolf-Dieter Heuerv was trying to say.

"Should we be concerned? Two new pieces of information have recently caught my eye. The first concerns arctic ice volume as reported by the Polar Science Center, Applied Physics Laboratory at the University of Washington. 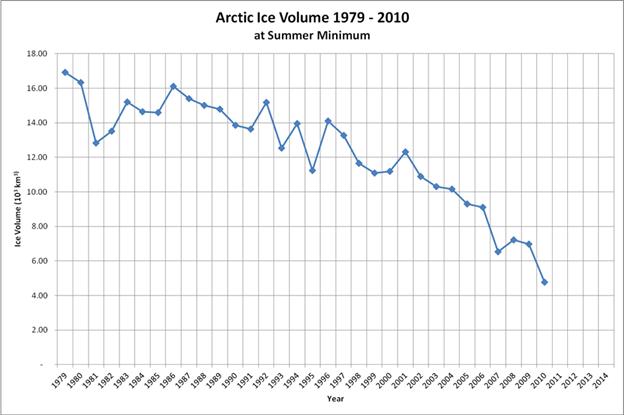 "I think you will have no difficulty spotting the trend acceleration here - and yes, this will be trend-ending as when the blue line reaches the bottom axis the arctic ice sheet will have disappeared for the first time in over 100,000 years. You can do your own extrapolation on when that event may occur.

"The acceleration is not unexpected as ice is the most reflective natural surface while open water is the least reflective. As blue water replaces ice the exposed water heats up and the process accelerates.

"Replacing the whole ice cap with warming ocean would have a dramatic effect on the arctic climate and consequently on surrounding areas which includes the Greenland ice sheet.

"The second item which caught my eye was released just this week. Following on from the important (but controversial) research published recently by Robert Howarth of Cornell University on greenhouse emissions from shale gas in the USA we now have a paper from Tom Wigley of the National Center for Atmospheric Research in Boulder, CO showing that a 50% switch from coal to gas power would slightly INCREASE the rate of greenhouse warming over the next 50 to 150 years even assuming very modest fugitive emissions due to the loss of sulfate aerosols which are currently masking about half of the warming effect of the current level of greenhouse gases. 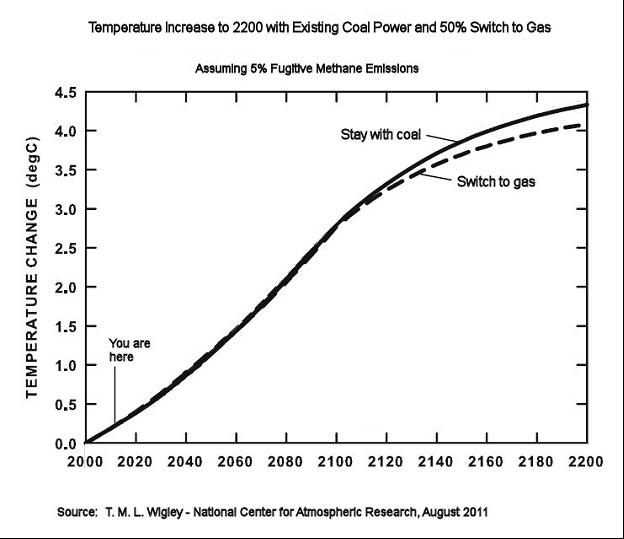 "If this work is correct then it has some pretty disturbing implications for the national energy policies of countries such as the USA and Australia who have largely based their approach to achieving national greenhouse emission targets on a smooth (politically and economically) transition from coal powered electricity generation to "cleaner" natural gas.

"Finally, the answer to the opening question is no.

"TCS somewhere in the 1980's and keen follower of FM ever since."

David Fuller's view Thanks for an amusing and robust email, which I am happy to post in the interests of balance.

We know that there has always been a fluctuating amount of climate change on our planet, and given that humans are now dominant as never before, we can only be part of that process. However, the extent of human impact on climate, relative to other influences from the sun to volcanic activity, trade winds and ocean currents, remains debatable.

Of the two graphs above, the Arctic Ice Volume reduction should be a concern to us all, as I mentioned yesterday.

The Temperature Increase to year 2200 is, of course, an extrapolation based on the assumption that the scientific argument on Anthropogenic Global Warming is settled. That would imply that we know everything that there is to know about this exceptionally complex subject. I think we should question the certainty of any "scientific argument" which is based on this assumption.

Among those most passionate about our need to find alternatives to fossil fuels, I find it ironic that they are often the people who are most opposed to nuclear power. I understand the emotional response but not the analytical conclusion.