There must be an absolute level of negative rates that destroys money velocity (V) as it means no one puts money in the bank anymore and lending gets restricted.  At -10% I wouldn’t lend to UBS.  What happens at say -5%?  Assuming a real rate of 3%, bank lending -after a margin of say 2%- would essentially be FREE (0%).  But what does that do to banking system integrity (banks make money but less of it as their margins collapse; their deposit base shrinks as they struggle to increase/ attract deposits………….not only do depositors go on strike but existing depos are decreased annually by negative yields!)….and what about regulatory oversight?….would CBs and regulators afraid of imprudent lending caused by needy borrowers at 0% step in to restrict the very process that they are trying to encourage via making money so cheap?  i.e. will they try to stop “BAD” lending.  How will they judge/enforce?

And where does inflation fit into this calculus?...without any inflation the interest rate structure/ yield curve that might restore banking margins is hard to normalize/ become positive again.

Just sharing some thoughts, largely written out of confusion

I think we are all in a state of disbelief at the willingness of investors to pour trillions into bonds with a negative yield. I have long wondered at the absence of any discussion of bond market convexity over the last decade. After all, shouldn’t we all have an interest in the sensitivity of bonds to changes in interest rates?

The term disappeared from discussion when central banks were buying hand over fist and distorting the yield curve. However, it has come roaring back as a factor in bond valuations as increasingly more bonds spot negative yields. Negative interest rates ignite profound changes in the valuation of bonds and justify silly valuations because of the inherent contradictions the condition creates.

I strongly believe that is most important thing to remember. This is a real-time example of a massive contradiction in the investment crowd. These kinds of conditions arise during the mania phases of profound bull markets. There is no bull market that has been bigger than that in bonds. The mania we are witnessing today has already gone farther than anyone thought possible and it is not over. When it ends, we are going to see a bear market of epic proportions and debt forgiveness is going to have to form part of the solution. 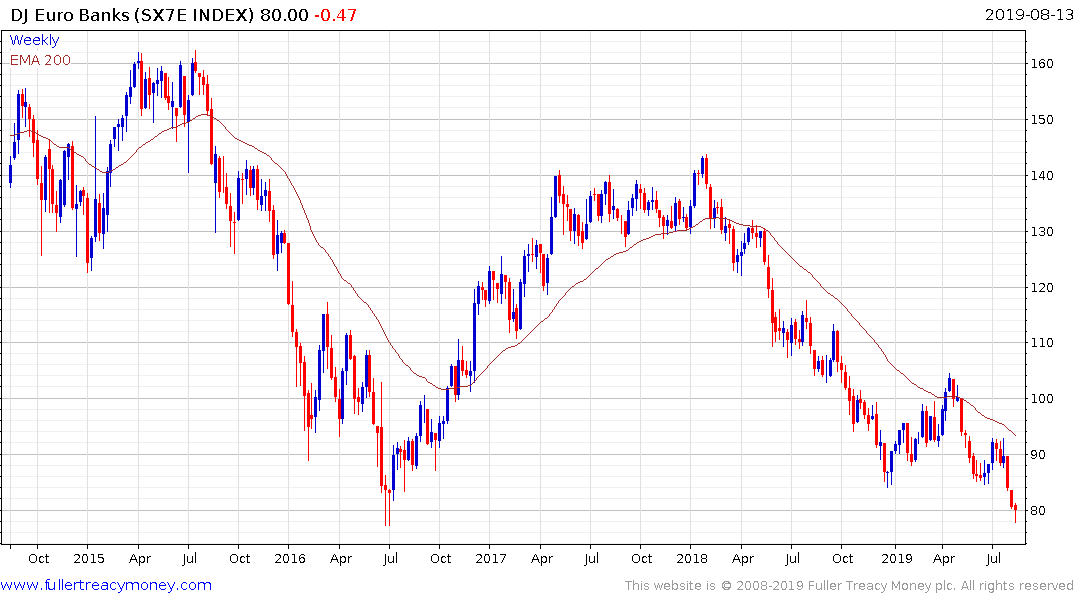 We are witnessing the destruction of Europe’s banking sectors. That’s why value propositions are so dangerous in this environment. It is not until we see material change in the macro environment that bargains will be realisable.