Email of the day - on zombie explorers
Comment of the Day

Email of the day - on zombie explorers by Eoin Treacy

Some weeks ago, I decided, having done some prior research, to make an investment in one of these companies. I have reached an age where I am quite willing to put a small amount of my cash resources at risk.

I was also somewhat amused by the name of the company and its ticker, Alien metals (UFO). It had had a chequered history having traded at £5 a share at one point in 2011 but over subsequent years investors deserted the company to value the assets at a fraction of a penny.

Although making no profits, it has assets in the ground in Mexico and Western Australia. I purchased early in August, one million shares at 0.22 pence per share. As the belief stage sets in on the developing bull market in metals, it seems logical that more of these companies are going to be noticed by investors in the near future.

Thank you for this email and congratulations on taking opportunities in the market. I agree there is likely to be more interest in explorers for the simple reason that there have been no big gold discoveries in the last few years. Mining is an extractive industry and miners have to expand their reserves through exploration or acquisitions.

Technically, a zombie company is one that is still functioning and doesn’t know it is dead yet. Back in March/April I spent a lot of time highlighting companies outside the technological sector with higher intangible values than their market caps. The logic behind that effort was to create a list of companies least likely to recover quickly. (Also see Comment of the Day on April 1st)

The challenge for zombies is their businesses are declining, debt is mounting but they survive because of liquidity. By contrast it might be better to consider junior miners and explorers as Lazarus contenders at this stage in the cycle because they have not splurged on additional spending and are running conservative business models leveraged to a higher metal price. 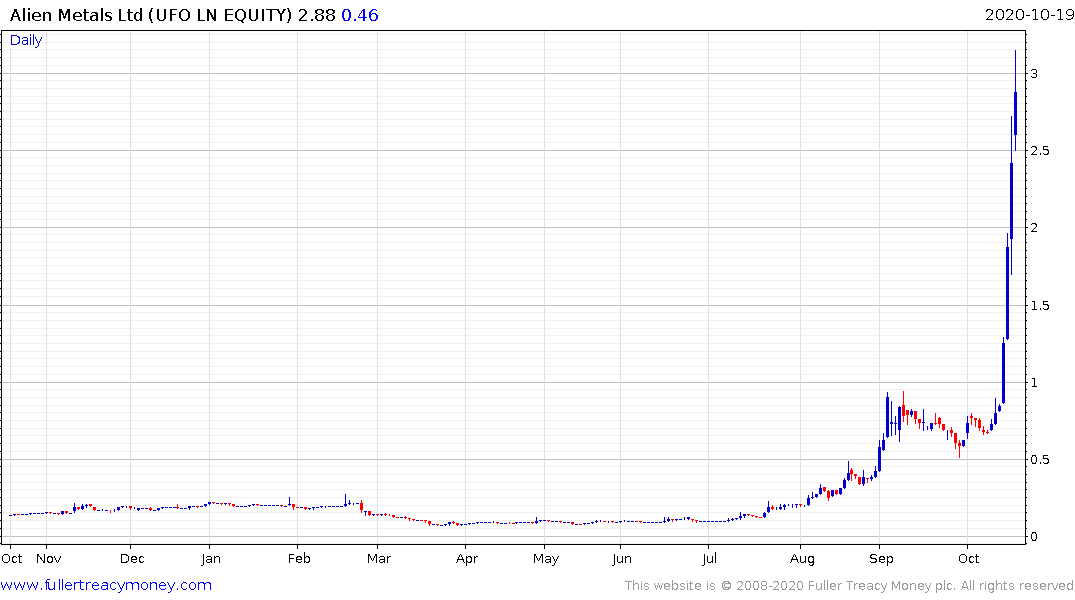 Alien Metals’ 10X advance since August is truly impressive but it has accelerated by any reasonable measure and is prone to at least some consolidation.

Also see Comment of the Day on October 12th