Mr Treacy mention on the big picture/long term view today that we are in the mania stage of the markets.

I would be grateful Mr Treacy could describe some past mania markets and how they played out - e.g. how long did they run for and what set of circumstances precipitated the turning point to the downside.

Thank you for this question which may be of interest to the Collective. The third psychological perception stage of a bull market is mania. It’s when the risk is greatest but it is also when it is easiest to make money from simply being long.

One of David’s adages was “bull markets don’t die of old age; they are assassinated by central banks”. The Fed tried to do that. The Federal Reserve’s quantitative tightening program was designed to siphon liquidity out of the system. It simultaneously drove up the value of the Dollar, which also has a liquidity draining function. Those efforts were in direct response to the massive fiscal stimulus deployed following President Trump’s electoral success. They kept going until something broke. The seizing up of the repo market in September was the first signal that policy has tightened to the limit of what the market could absorb. By the time the coronavirus struck, the Fed was in full retreat and quickly moved into full crisis mode.

Bull markets thrive on liquidity. You can’t have a big trend without it. The Fed has now stepped in to provide a de-facto standing repo facility. It is tempting to look at the projected expansion of the Fed’s balance sheet to potentially $10 trillion. However, the repo market opens the Fed up to unlimited liability. That means unlimited money printing because the global financial system cannot function without the money markets. https://www.bloomberg.com/opinion/articles/2020-06-22/fed-s-balance-sheet-heads-to-10-trillion-to-support-u-s-economy 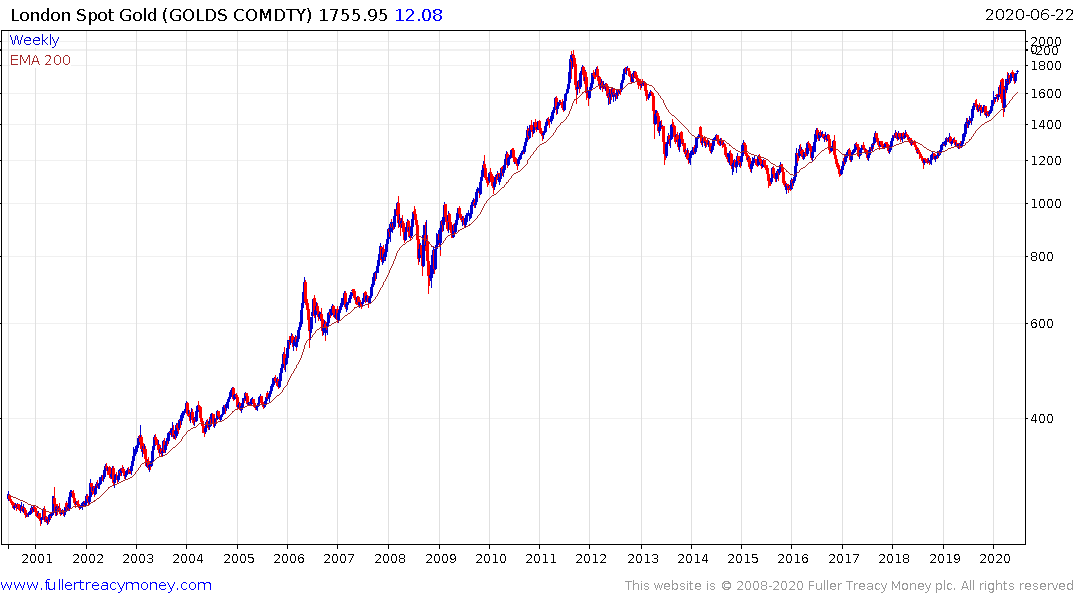 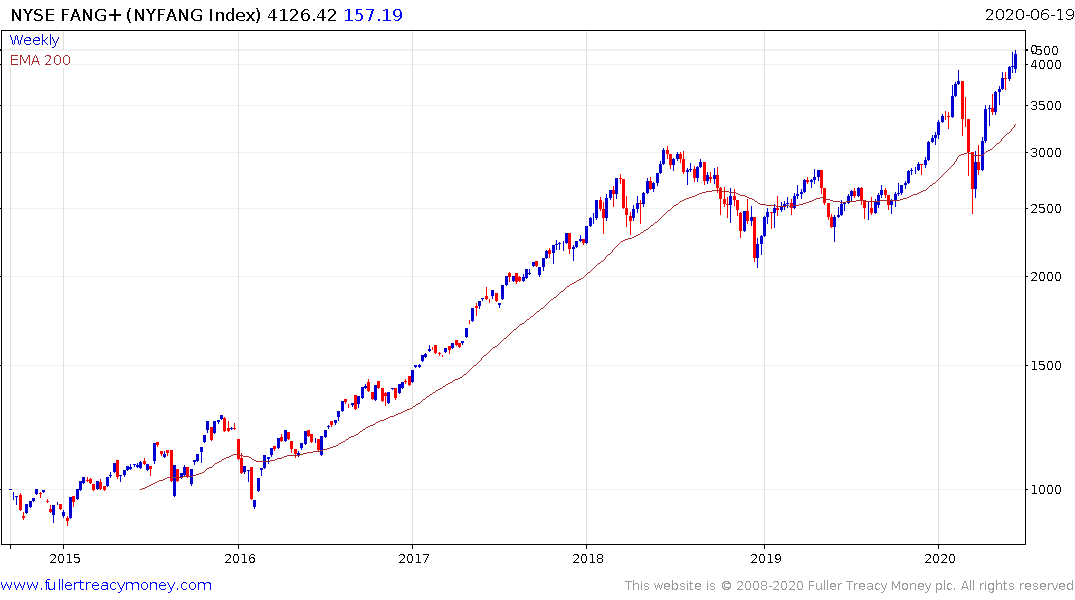 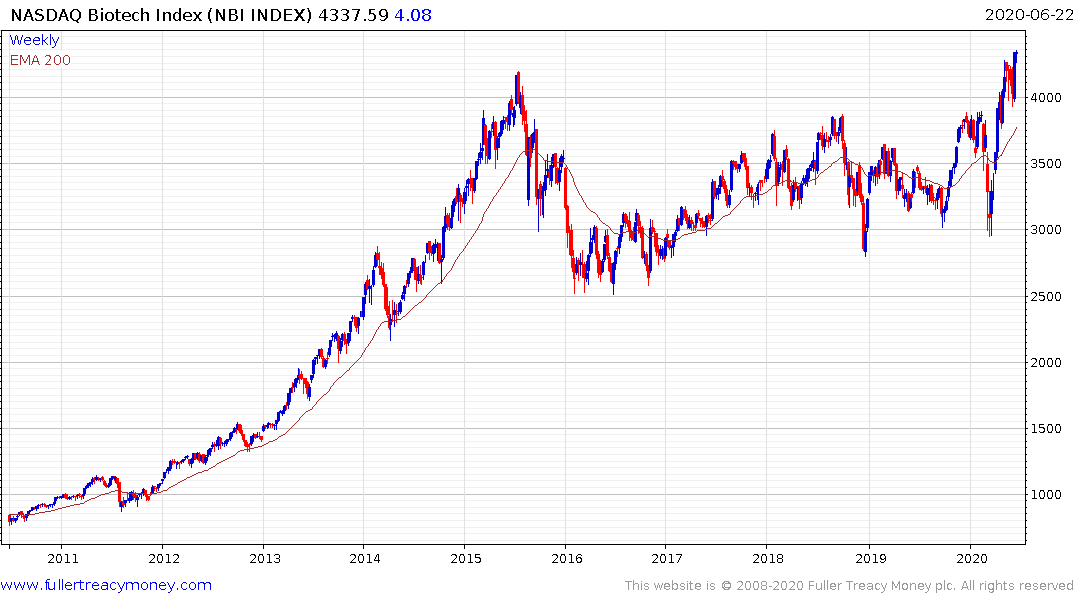 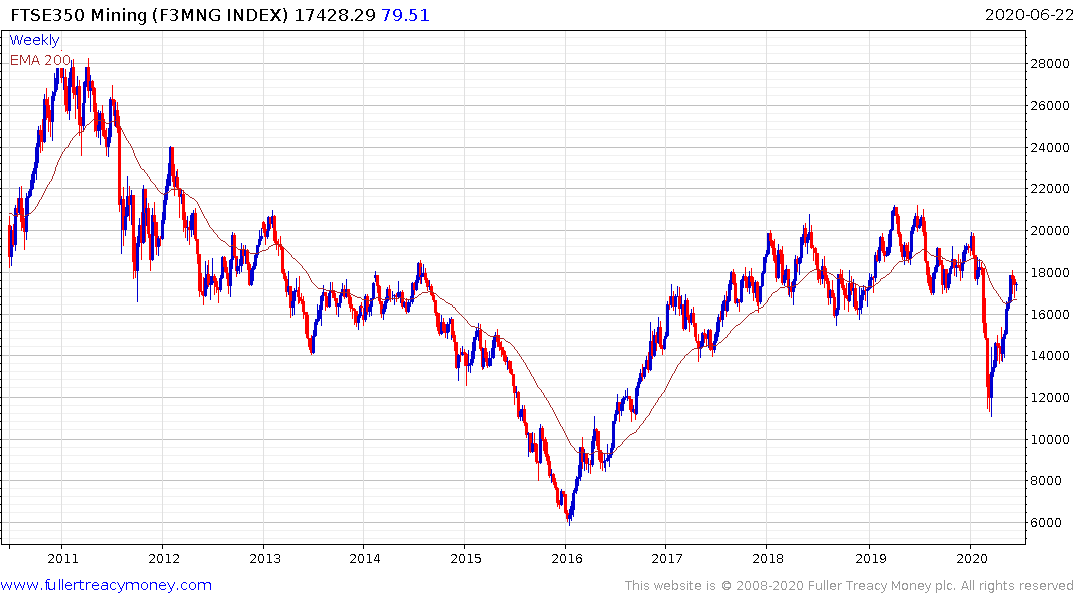 I spent much of the Friday’s video speaking on conviction. Right now, gold, technology, biotech and infrastructure development are high conviction ideas because they have the clearest recovery potential. There will undoubtedly be success stories in the airline, cruise, hotel, restaurant, retail and service sectors but there will also be bankruptcies therefore much greater knowledge of individual company fundamentals and value will be required for stock picking.

It is impossible to know just how long the third phase will last but we can be reasonably sure it is unlikely to end until central banks begin to act against an emerging inflationary threat. That was true of acceleration in tech from 1995 to 1999 and it was also true of the commodity bull market between 2006 and 2008. 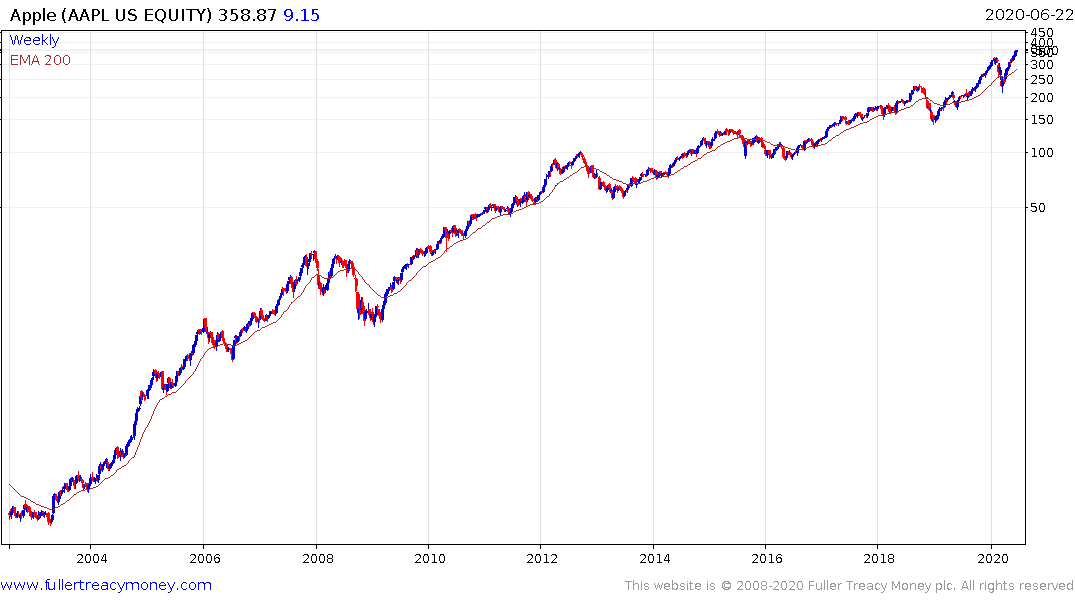 Apple, for example, has posted three big ranges, one above another in the last eight years. The pace of the advance is now picking up because it is a high cashflow company with strong income growth and does not rely on its brick and mortar network for its business.

When we look at the log scale chart for the Nasdaq-100, it also has a sequence of ranges one above another with the failed breakout in February clearly visible. Support was found in the region of the region of the 1000-day MA and we are now at new highs. The 200-day MA should now offer support during pullbacks.

The acceleration lower in March was a clear entry point. It is quite normal to expect a retest of the low or lengthier consolidation following such a speedy pullback. The strongest sectors have not had that and are now trading out to new highs.

Another one of David’s Fullerisms was “We need to foster the humility to deal with the reality provided by the market”. It is telling us we might not get more than a shallow reaction in the region of the peak.

Of course, we could have any number of debilitating factors emerge. An additional outbreak, an even more dangerous mutation, political turmoil, geopolitical tensions, a hot war in the Middle East or elsewhere or a major financial sector accident are all possibilities but not urgent worries. Monetary policy and liquidity are by far the most pressing considerations right now. It was inevitable that quantitative tightening would cause a hiccup eventually and the influence of central bank policy has only become more powerful since.