Email of the day - on silver miners:
Comment of the Day

Email of the day - on silver miners: by Eoin Treacy

With the silver/gold ratio at multi-year lows, coupled with the adage that silver is high beta gold, I’ve been evaluating from a contrarian perspective whether to increase my exposure to silver whilst the market is in the depths of despair and await a possible turnaround.

The problem is where to venture as the fundamentals of virtually every silver producer are pretty scary, including CDE, which has been mentioned from time to time in your Comment of the Day.

I came across this informative article which analyses in some detail the current state of the market and its various producers, the declining percentage of their production which is silver related, and their prospects of outperformance should the silver price recover.

I would appreciate your insight into this analysis and which companies, or ETF’s, you feel might be worth considering for investment.

Thank you for this informative article which may be of interest to other subscribers. Here is a section:

Silver mining is as capital-intensive as gold mining, requiring similar large expenses to plan, permit, and construct new mines, mills, and expansions. It needs similar fleets of heavy excavators and haul trucks to dig and move the silver-bearing ore. Similar levels of employees are necessary to run silver mines. But silver generates much-lower cash flows than gold due its lower price. Silver miners have been forced to adapt.

This is readily evident in the top SIL miners’ production in Q1’19. SIL’s largest component in mid-May as this latest earnings season ended was the Russian-founded but UK-listed Polymetal. Its silver production fell 15.0% YoY in Q1, but its gold output surged 41.1%! Just 17.5% of its Q1 revenues came from silver, making it overwhelmingly a primary gold miner. Its newest mine ramping up is another sizable gold one.

SIL’s second-largest component is Wheaton Precious Metals. It used to be a pure silver-streaming play known as Silver Wheaton. Silver streamers make big upfront payments to miners to pre-purchase some of their future silver production at far-below-market unit prices. This is beneficial to miners because they use the large initial capital infusions to help finance mine builds, which banks often charge usurious rates for.

Most of the primary silver producers are now also gold miners. In a rising precious metals price environment that provides some optionality to the market. This report from Hochschild Mining details how mine production has been deteriorating but demand increasing over the last year; suggesting a deficit of a couple of percent.

Silver bounced last week to break its six-month sequence of lower rally highs and will need to hold the recent lows if recovery potential is to be given the benefit of the doubt. The $15 area has represented a major area of support for the metal over the last six years so there is scope for it to continue to bounce from this area.

The gold/silver ratio is at historically high levels but gold is probably going to have to break out of its base to spur a catch-up play in silver and platinum. 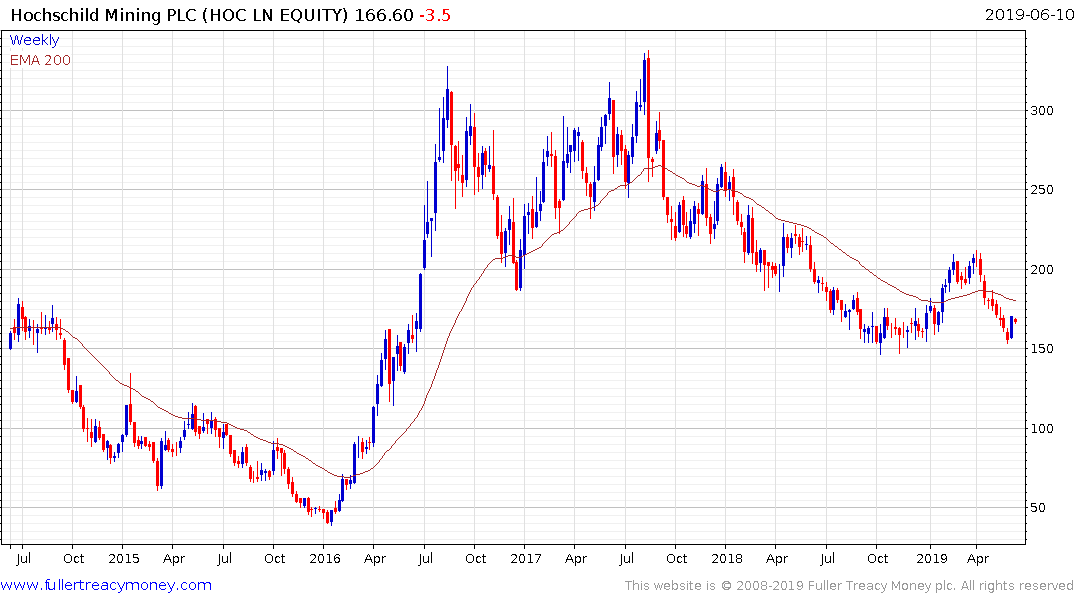 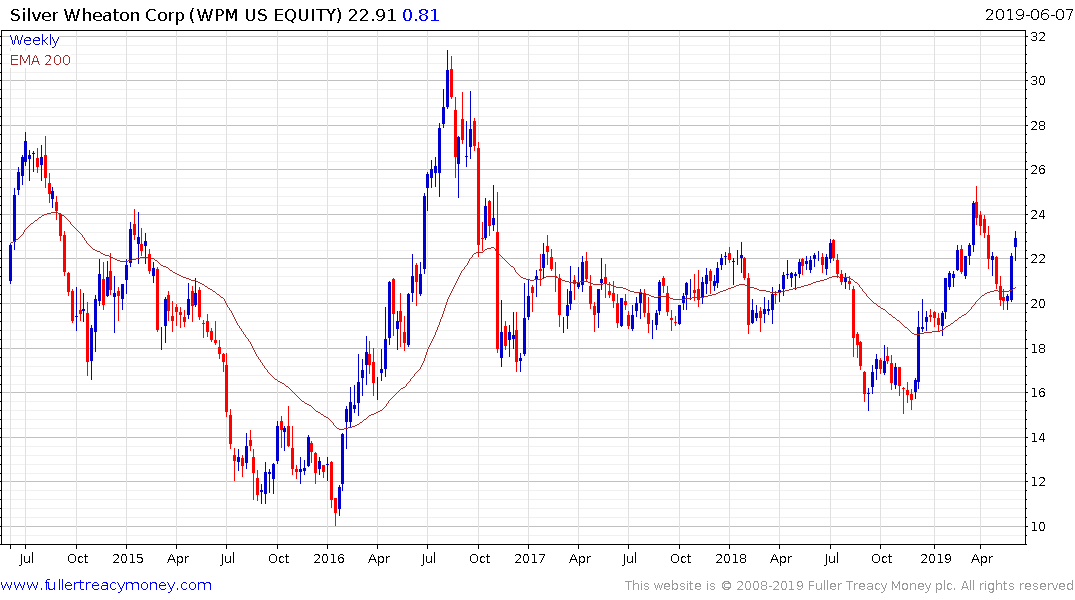 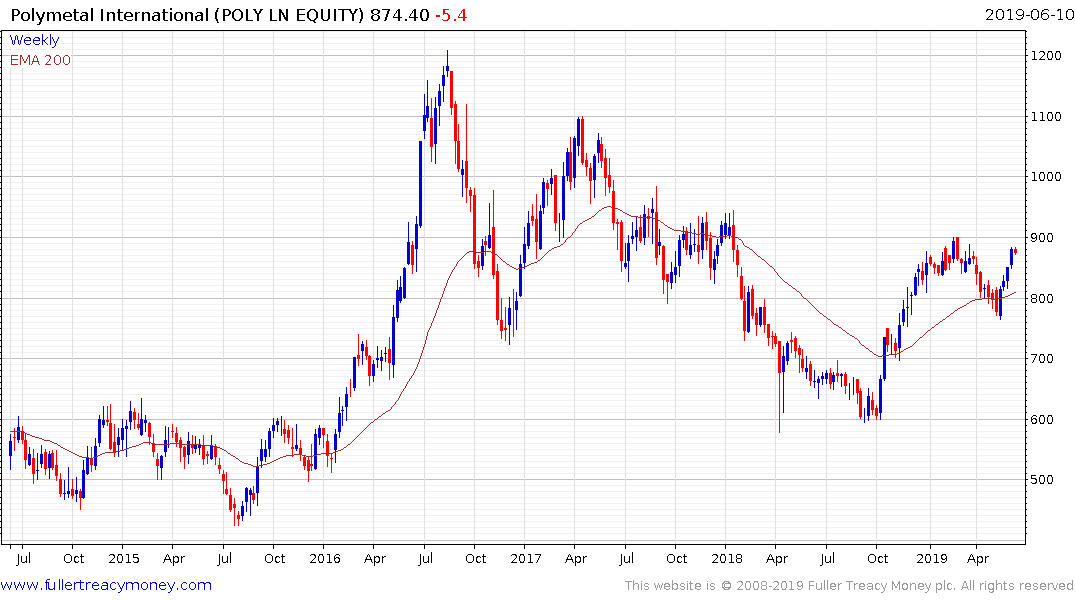 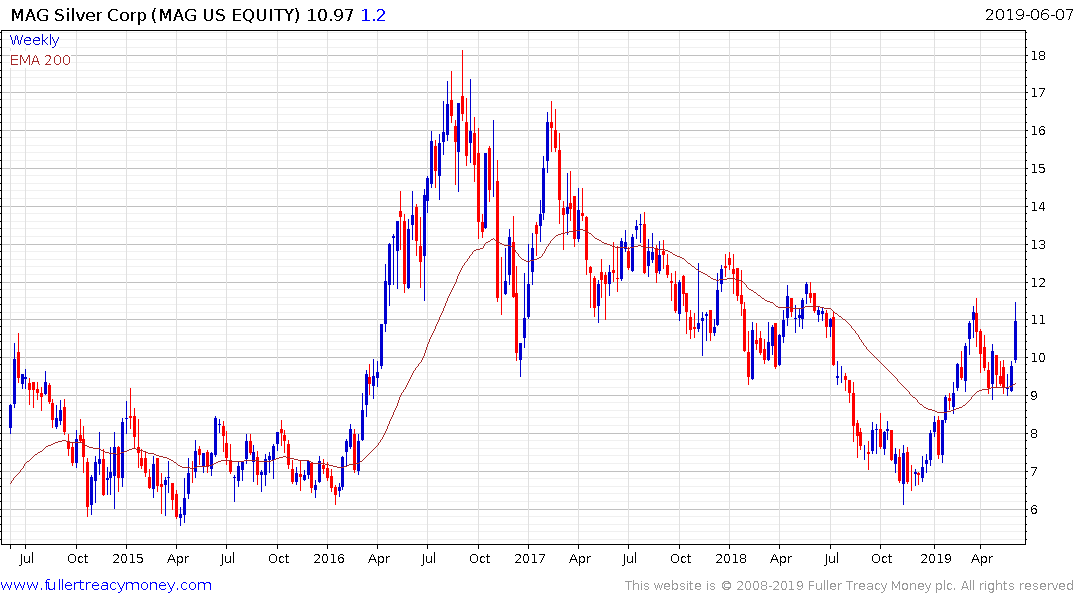 Silver miners might be considered high beta plays on the sector with Hochschild Mining, Silver Wheaton, Polymetal International and MAG Silver have some of the more attractive chart patterns.