Email of the day - on investable ideas
Comment of the Day

Email of the day - on investable ideas by Eoin Treacy

Firstly, thanks for the terrific service, it’s been so helpful in these turbulent times.  I was interested to read the subscriber feedback in today's comment.

I agree with the comment that sometimes it’s quite hard to find investable ideas in some of the themes that you so accurately pick up on.

For example, soft commodities/agricultural products, some direction as to likely beneficiaries would be really helpful.  I’m a UK based investor, so in general like to stick to our market or Europe and it has not been easy.  Perhaps Bayer?  ABF but the Primark exposure is confusing.  In the Eoin’s Favourite’s section of the chart library some of the categories do help, but there’s doesn’t seem to be one directly related to rising soft commodity prices other than farm machinery or fertilisers?

Lithium is another one where I am struggling to find the right investment, even though I looked at your collection of related companies.  As the price seems to have broken out of a long-term downtrend some suggestions as to likely beneficiaries would be really helpful, although understand that one must also do one’s own research.

With Bitcoin, which I’m not that keen to buy, but you highlighted the Greyscale Bitcoin Trust which although I’ve not invested in it was really helpful to have an idea related to the concept you were right about.

Hope this feedback helps and thanks again.

I found the criticism yesterday, a bit harsh.  There are few sites that provide the breadth and depth that we get from FTM.  Here, in West Aust, I wake each morning to your market summary of the principal events.  I find it cost effective for that point alone.

The suggestion above regarding missed opportunities is one worth pursuing, not so much regarding the chartbook but for highlighting early chart indications of emerging opportunities.  I feel that perhaps FTM may report facts that are available elsewhere but the site is not fully exploiting your chart analysis skills that are not available elsewhere.  You should exploit your strengths and don't reproduce stuff that is, or soon will be, in the media. We all want to know where Eoin Treacy sees emerging or imminent changes.

Thank you both for this feedback and your kind words. I am a firm believer in giving the people what they want. Afterall, why else would one subscribe. Let me address the challenges in the order they are outlined in the above emails.

The first is that not every country has suitable ways of investing in global themes. The UK is particularly well endowed with investment options for emerging markets and country themes. There are many different funds and trusts to also invest in industrial resources and precious metals. One of the other idiosyncrasies of the UK market is it is one of the easiest places to get direct access to hydrogen (Ceres Power, ITM Power) and graphene (Versarien, Haydale) but it is a bit player at best in agricultural chemicals. Bayer has the scope to be a major force in seeds following its acquisition of Monsanto but at present it is a weighed down by continued uncertainty above litigation costs inherited from Monsanto. 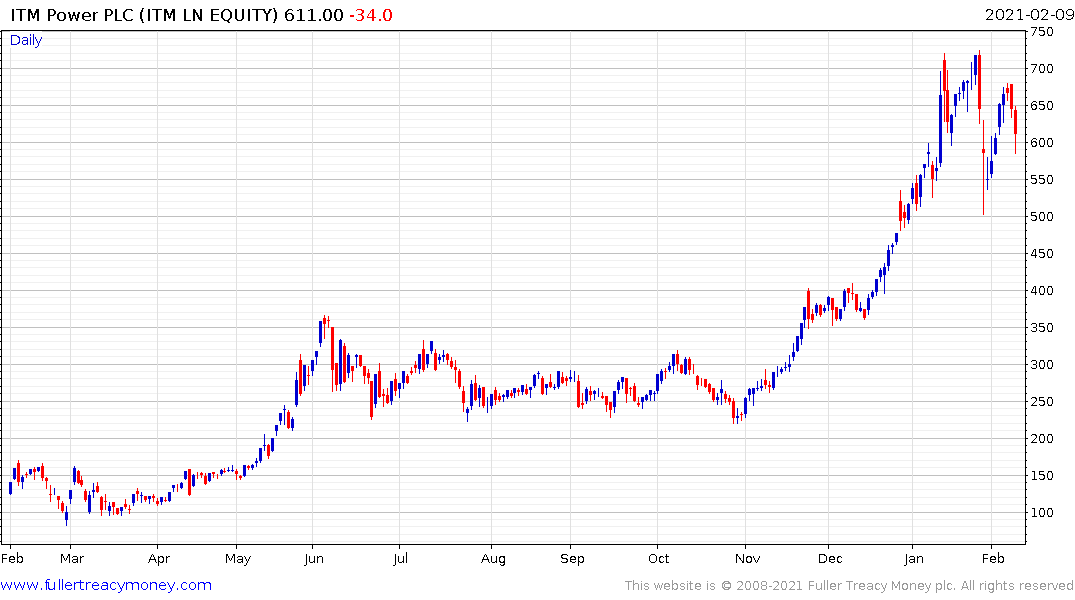 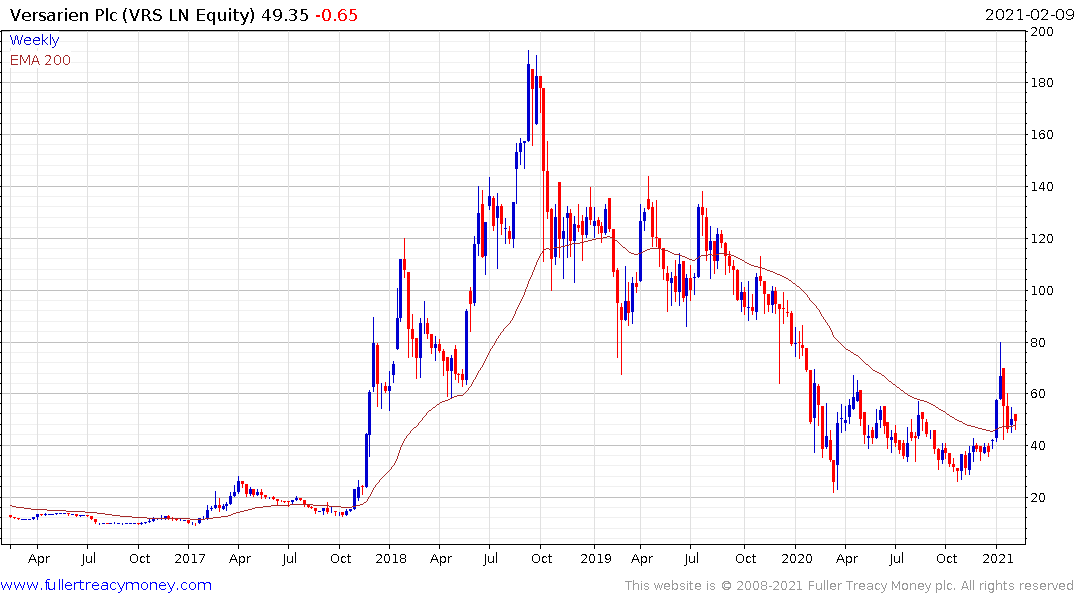 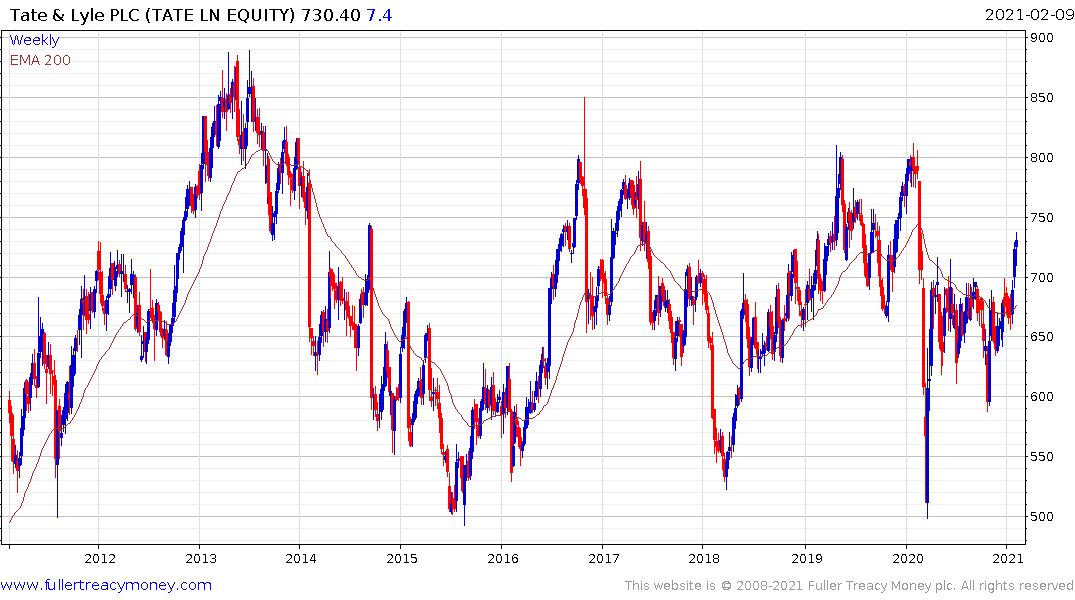 One of the UK companies that offers access to rising soft commodity prices is probably Tate & Lyle. The share has been ranging for 13-years and is currently rebounding. It trades on an estimated P/E of 12.49 and yields 4.05%. As a producer of sugar/sweeteners and food ingredients it benefits from pricing power advantages in the early stages of an inflationary cycle. 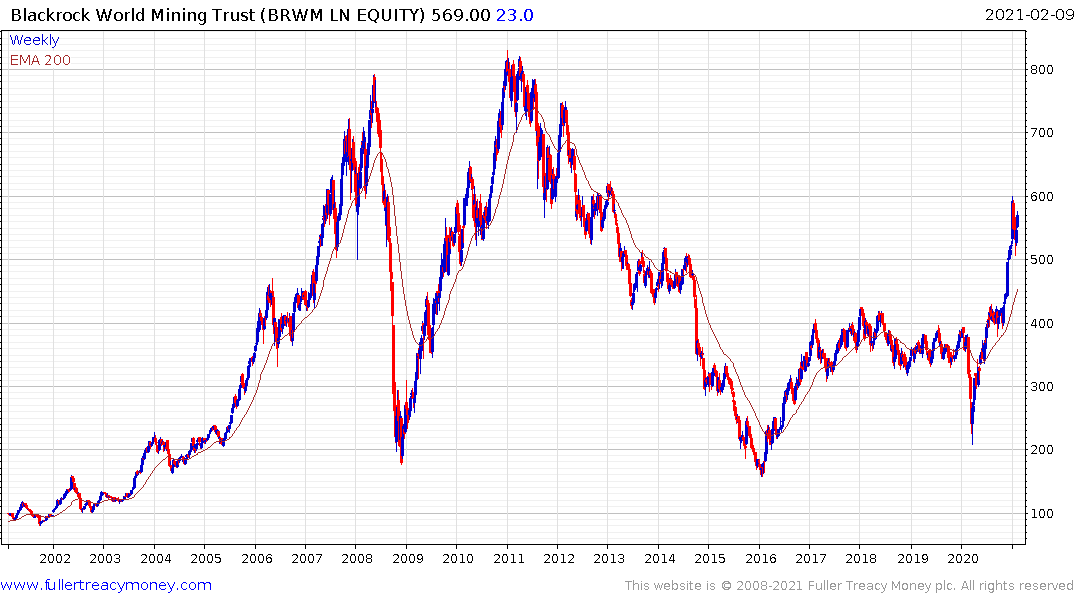 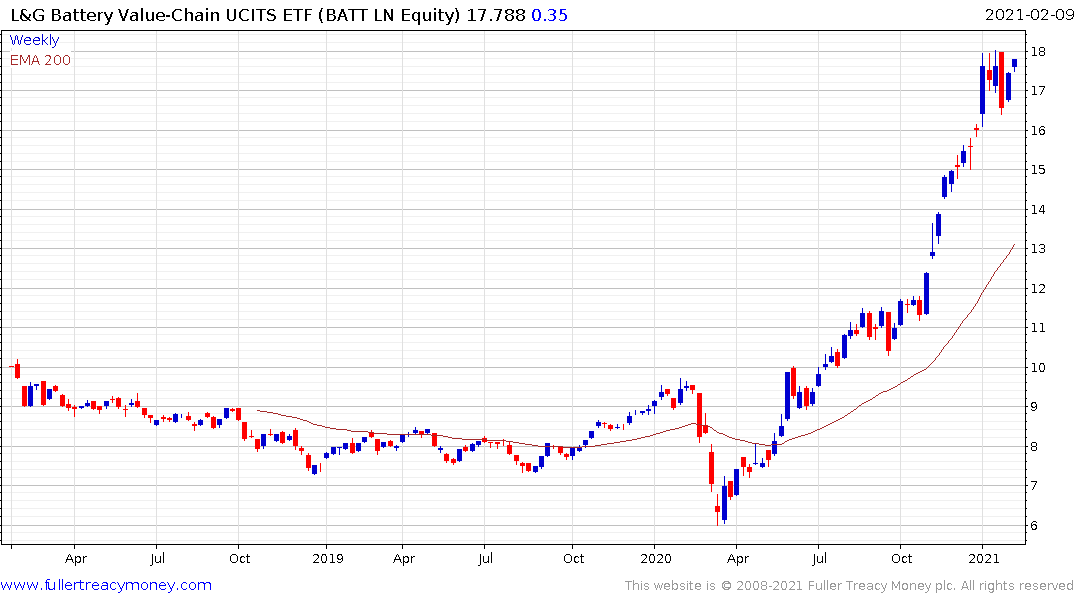 The UK listed lithium plays are all small, volatile and loss making. I favour investing via the metals over the battery manufacturers because of the outsized influence of Tesla on the make-up of ETFs. The Blackrock World Mining Trust is very diversified but has clearly completed its base formation. The L&G Battery Value Chain UCITS ETF (BATT LN) holds a mix of miners, battery manufacturers, Tesla and other car companies.

Turning to chart reading. The message here is simple enough. There are only two big topics. The crowd and money supply. The crowd is clearly signalling the desire to get invested and in a hurry. There are a significant number of charts that are accelerating (innovation/tech), others are completing base formations (all commodities, shipping, steel) and single stock volatility is ramping higher. 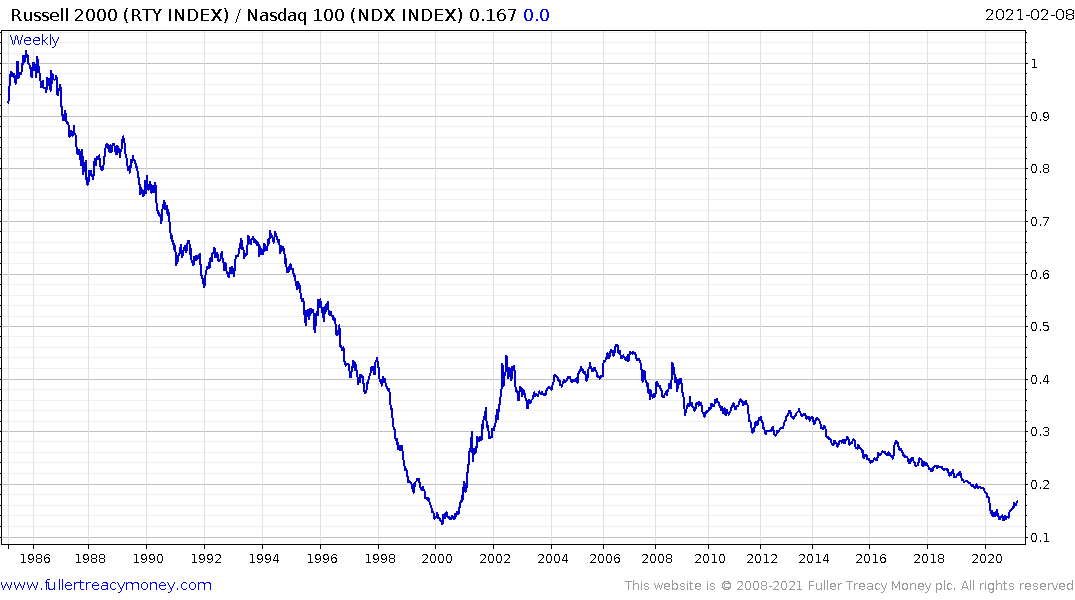 The clear commonality between the return to performance of Europe, developed Asia, emerging Asian and commodity exporting stock markets, while their currencies appreciate against the US Dollar is the biggest change in a decade. It is setting the stage for a significant long-term rotation out of large cap US and into everything else. It is not a mistake that the Russell 2000 is now outperforming the Nasdaq-100.

Governments all over the world are signing up to spend trillions on renewable energy. It stands to reason the respective sectors will exceed their pre-GFC peaks before this trend is done. It is also likely to be a sufficient catalyst to drive the relevant industrial metal prices to new highs.

The big question for investors is where will the money come from to fund all this spending and investment. So far, governments and central banks have supplied the fuel and there is little prospect of that changing considering the repercussions of withdrawing stimulus. They have learned their lesson. They need to keep stimulating until they get a sustainable inflation trend. That’s why gold is in a secular uptrend despite occasional volatility. 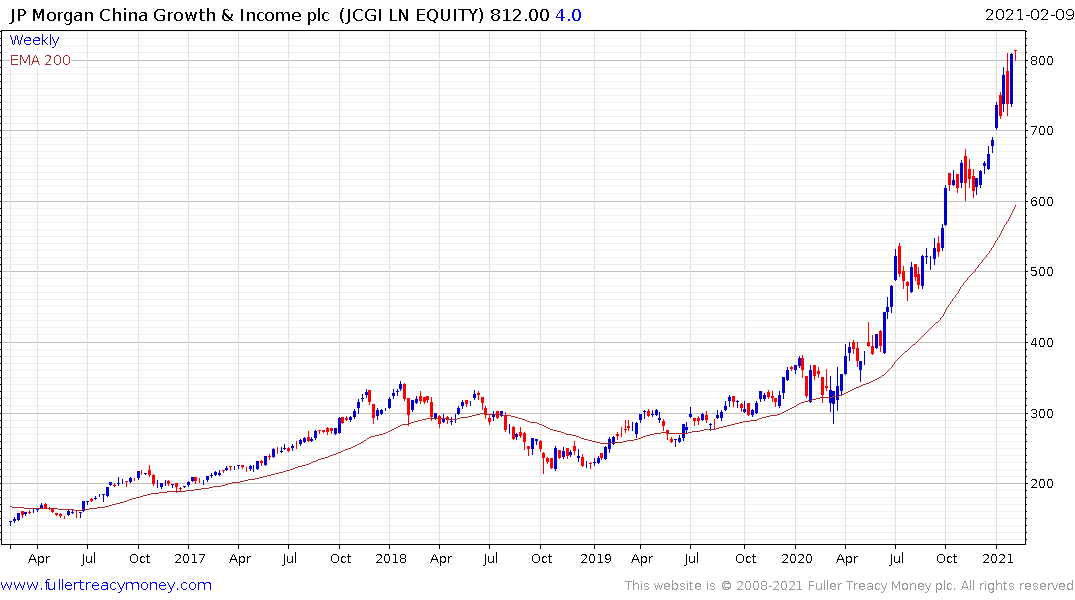 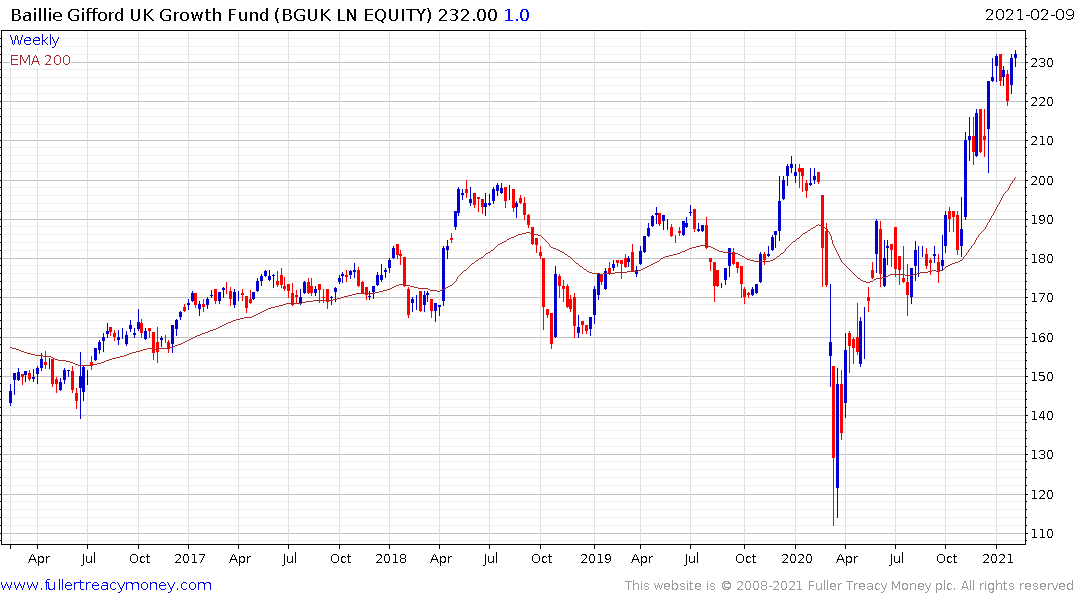 China is coming out of the pandemic as a clear winner. The better performing trusts like the JPMorgan China Growth and Income (JCGI) and Baillie Gifford Growth Trusts (BGCG) continue to extend steep uptrend. There is no question the country represents significant potential geopolitical risk but it is performing at present.