Email of the day - on gold versus tech by Eoin Treacy

Some people think that technology shares and gold are correlated. Why would this be the case for such different asset classes?

Do you think if the Nasdaq drops that precious metals will as well?

Thank you for this question which may be of interest to the Collective. On an historical basis there is little correlation between technology and gold. For instance, tech did very well in the 1990s while gold languished. When gold took off in the early 2000s, most tech shares spent most of the decade ranging. When gold peaked in 2011, many tech shares were on the cusp of completing those long base formations. So, what’s changed?

Interest rates close to zero change the calculus. Without a discount rate, it is impossible to value instruments along traditional metrics. That provides a tailwind to companies and assets that do not submit readily to a dividend discount model in the best of times. Since gold does not pay interest fundamental analysts have always had difficulty valuing it. The same is true for high growth stocks with no profits. To come up with a valuation requires creativity. Meanwhile traditional value shares continue to underperform because they their entire appeal relies on their outperformance to a discount rate which no longer exists. 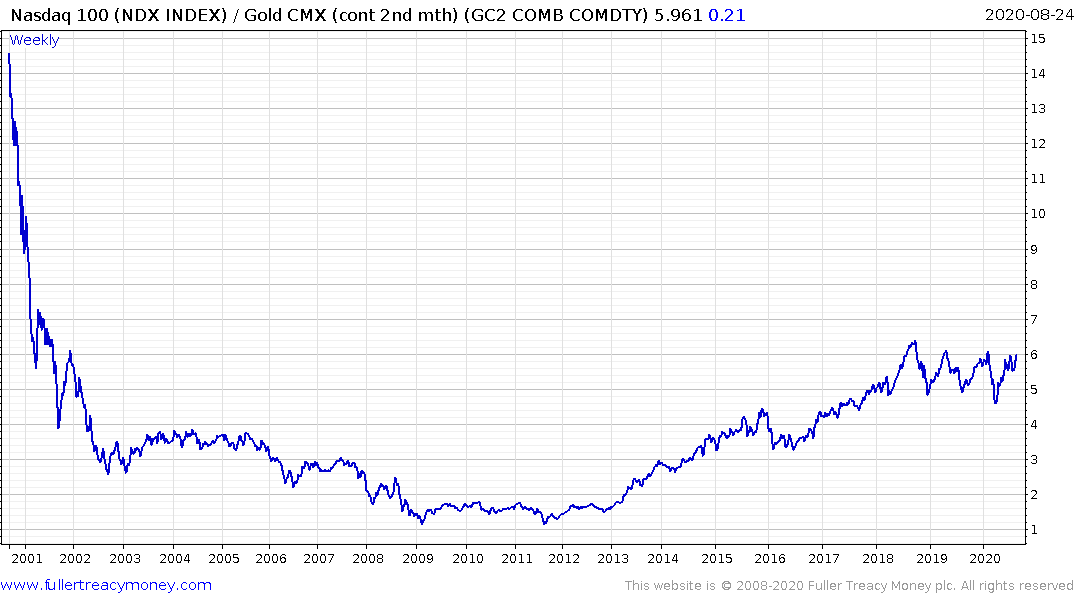 This set of conditions is allowing gold and growth to rally together. When we look at the Nasdaq-100 Index relative to gold we see it peaked in 2018 and is now challenging the sequence of lower rally highs. A sustained move above 6 would signal a return to outperformance beyond the short term for growth shares.

Let’s think about what could derail the accelerations currently evident in the mega-caps. Any time there is a whiff that interest rates might rise, the sector eases back. That’s exactly what we saw today. Treasury yields rose a smidgeon and just about all of the growth sector paused. So did gold. 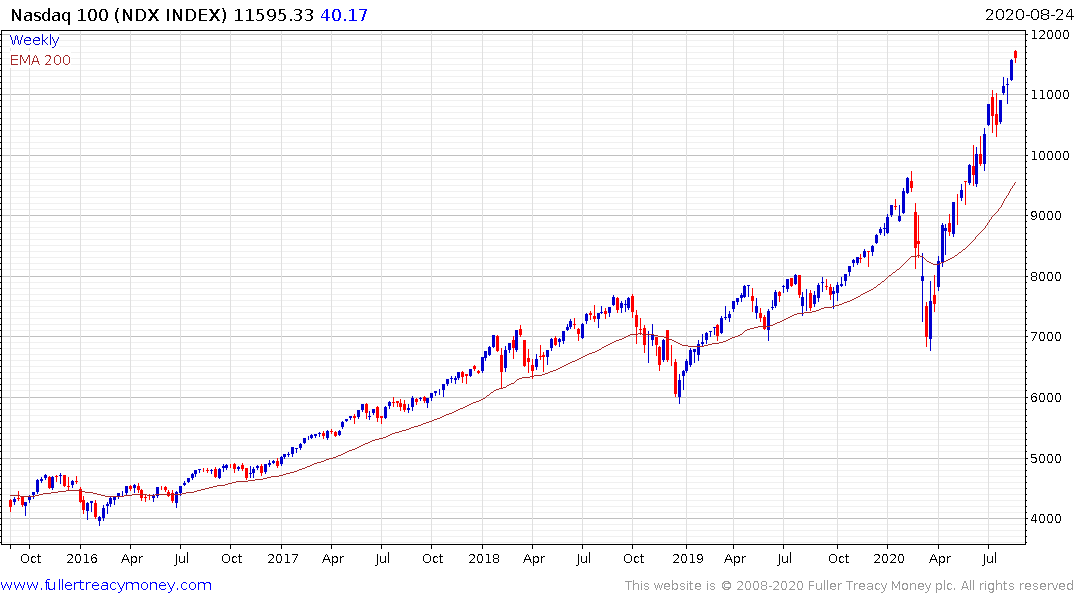 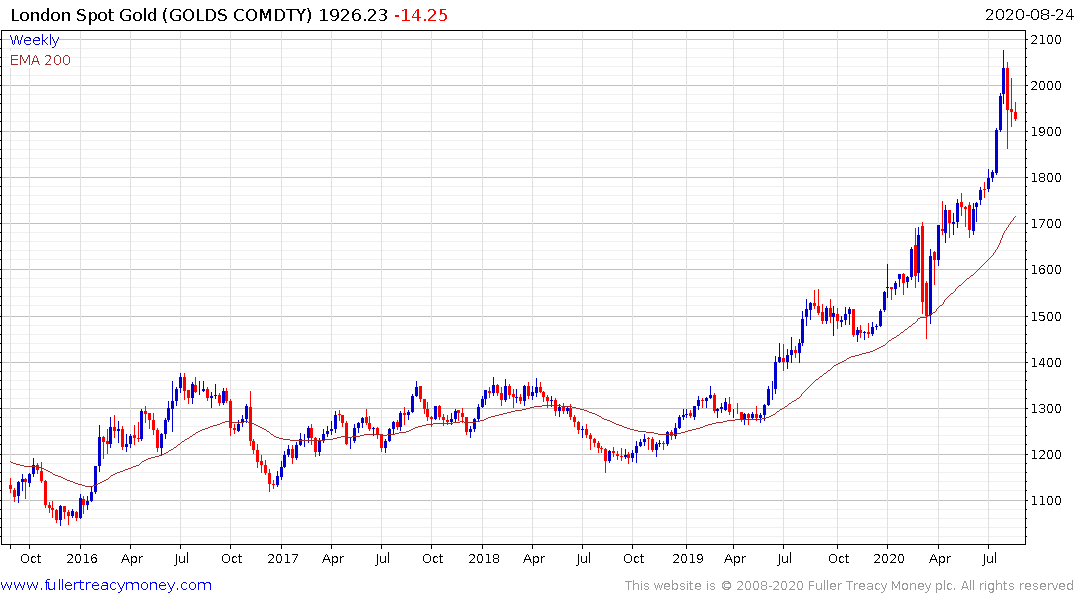 Growth rallies on low interest rates and abundant liquidity because it’s easier for loss making businesses to source funding and it is also easier to predict great things for the future with no discount rate to compare against. Gold rallies on negative real interest rates because it is representative of government’s intention to debase the currency. 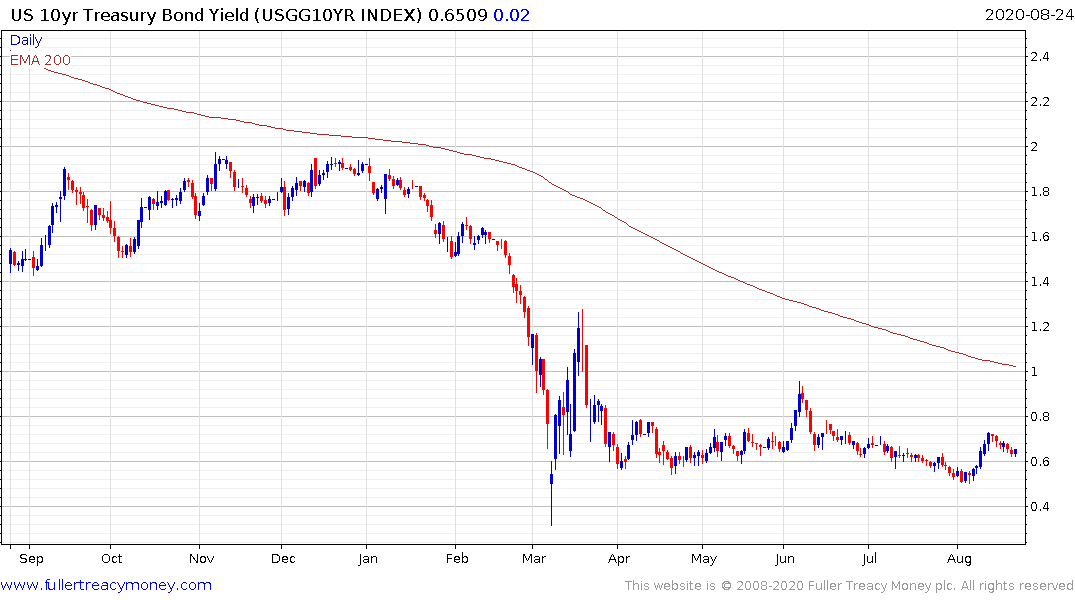 Bond yields rose by almost 200 basis points, albeit in a jerky manner, between 2002 and 2007. That was also when investors were acutely aware of the threat of financial repression. The big threat to growth is inflation because of the upward pressure that would put on interest rates. That would also create demand for inflation hedges which should be good for gold.

The challenge in the near term is both price series are overextended relative to their trend means so they are both susceptible to additional consolidation. The fact the Nasdaq-100 is at an area of resistance relative to gold suggests it could fall more during a reaction.