Email of the day - on Ethereum as a crypto panacea:
Comment of the Day

Email of the day - on Ethereum as a crypto panacea: by Eoin Treacy

I value the input you provide Eoin. I however disagree with your comment that cryptos will next be of interest in 2023. Ethereum is a disruptive technology platform with strong network effects which is growing rapidly. In addition, the supply of ETH will diminish by about 85% (a triple halving) when Ethereum transitions from Proof of Work to Proof of Stake (POS), likely in December or early next year. Electricity required to power Ethereum simultaneously goes down by 99.99%. In addition, EIP1559 goes live at the end of this month, which both improves the user experience and burns the bulk of the fees (paid in ETH) - the combination with POS probably results in the number of ETH declining on a consistent basis. Holders of ETH can stake their ETH to own an attractive yield. In short, it is the most compelling opportunity I’ve come across in my decades as a money manager.

I have no strong opinion on Bitcoin. I think its security model is flawed and I doubt it will stand the test of time. I however think the odds favour most crypto assets having a strong run over the next 6 months, perhaps driven by the growing understanding that blockchains are a disruptive new technology that is far more efficient and decentralized than the financial systems of the past.

Thank you for this email and your valuable insight. My contention has been that in order for crypto to succeed it will need to go the way of Encarta and AOL Online. We paid for these services when the internet was still young because they were valuable tools with no real competition. Today they either do not exist or are inconsequential. The internet on the other hand has become part of the economic landscape.

Why does crypto have to be any different? Why do tokens need to have value? The answer is that token value is seen as the business model to allow early scaling, just like AOL. The value of the proposition is not in the tokens but in what the network can do.

The reason companies like Facebook are interested in developing applications that incorporate crypto is so they can circumvent banking regulations. That’s part of the economic landscape too and is deemed ripe for disruption. It’s a big prize and represents a massive pool of global liquidity. It does not depend on token value but rather on the ability to divert flows away from conventional banks and into the network.

Ethereum, through proof of stake, wants to become the bank. By posting your Ethereum tokens to collateralize the system you are committing to leaving them invested in definitely in return for a dividend paid in Ethereum. This is attractive from the perspective of investors seeking a return even if it is paid in tokens. However, the whole point of decentralized finance is avoiding bank fees and regulation. If Ethereum becomes the bank, it will inevitably attract regulation and that is not necessarily a good thing. 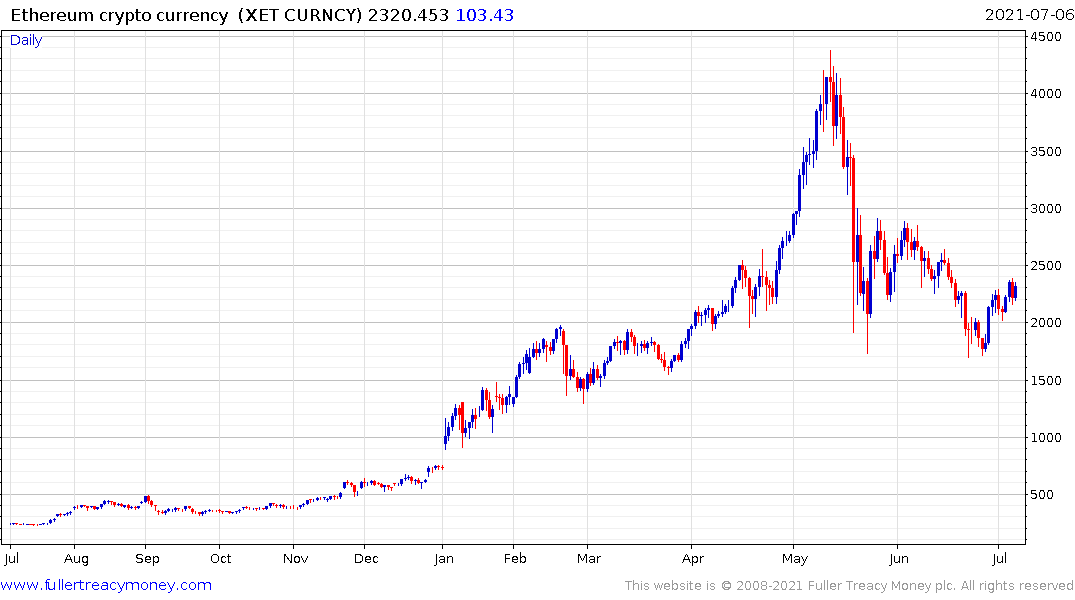 Meanwhile, there is no evidence that Ethereum can rally on a sustained basis with bitcoin also taking part.

You make highly relevant points about the pace of development in Ethereum and how they are attempting to solve real world problems but the logical comparison is with IOTA rather than bitcoin. IOTA is doing the same thing but cheaper, quicker and with less reliance on the good will of stakers. It is also much smaller and much higher beta.

I would encourage anyone interested in the sector to avoid being lulled into a sense of security by argument while the price is still correcting. This article quoting the Bank of International Settlements and detailing how investors in Ethereum are the most educated in the crypto sector is a good example. Isaac Newton lost a fortune during the South Sea bubble, by buying back too early, and it was not for lack of education.