Email of the day - on deflationary risks
Comment of the Day

Email of the day - on deflationary risks by Eoin Treacy

In today’s Audio you stated that there was an increasing risk of deflation. This is unsurprising because the capitalist system rewards the production of cheaper and better goods, while the continuing industrialization of the under-developed countries maintains downward pressure on wages. Throw in the emergence of crypto currencies and one must ask if gold will ever regain its former status in the economic system. Your views would be appreciated.

Thank you for this question which is particularly topical as we look to the year ahead. This year has been notable for a significant uptick in inflationary pressures. The extraordinarily low base level of 2021 contributed enormously to the year over year change while the tsunami of liquidity ensured readings were above even the most ambitious forecasts. This has resulted in economic statistics hitting headlines for most of the year even though most of what has happened is a product of base effects and liquidity.

In 2022, financial conditions will tighten. That’s inevitable because the vast fiscal deficits run by most countries will contract. At the same time, a significant new crisis, worse than COVID, will be required to reignite central bank QE programs to the scale seen a year ago. Jay Powell’s statements this week talking about the potential to accelerate tapering served to emphasise those points.

With the semiconductor shortage for vehicles likely to be solved by the middle of next year and oil prices less likely to surge, there is significant scope for inflation to surprise on the downside next year. That’s an obvious 2022 prediction. However, it is also a necessary condition to emphasise the broader inflationary trend. Prices are not going back down, the pace with which they are rising will moderate for a while.

The globalisation model is facing its biggest challenge in years. Optimising supply chains to avail of China’s one-stop shop for manufacturing contributed to lower consumer product prices for the last twenty years. Rising geopolitical tensions and the need to replicate production capacity in alternative locations is inefficient and will push up prices. Globalisation is not going away, but the trend of ever lower consumer prices is likely over.

Rising worker activism is pushing up wage demands everywhere, but it also inhibits governments from clamping down on deficit spending. No one is in any mood to go back to fiscal austerity. Wages in China are rising quickly and potentially faster than in more developed economies.

Central banks are in a tight spot because of the scale of the debt mountain. The pressure that would come to bear on their respective governments from rising debt servicing costs would be too much accept. That suggests interest rates will peak at significantly lower levels in this cycle. The yield curve spread has already peaked.

The next time we have a recession, central banks won’t have interest rates to cut. They will have to delve even further into the toolbox of previously unimaginable policy options to monetise the debt.

I view cryptocurrencies as risk assets. They do very well in very liquid environments. The years in which bitcoin halvenings occurred (2012, 2016 and 2020) have all coincided with significant buying opportunities in the stock market.

This willingness to look through current challenges to the conclusion that interest rates can’t rise is the primary rationale behind the willingness to buy the dip in the stock market. 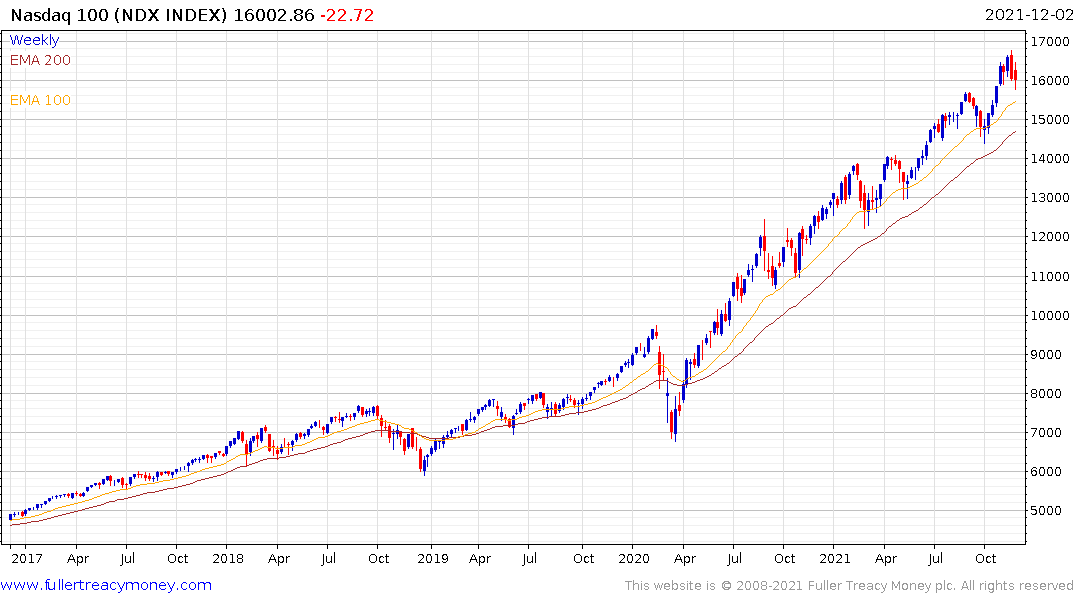 As long as the Nasdaq-100 remains in a consistent trend, with a sequence of similar-sized ranges one above another, we can continue to give the benefit of the doubt to the upside. 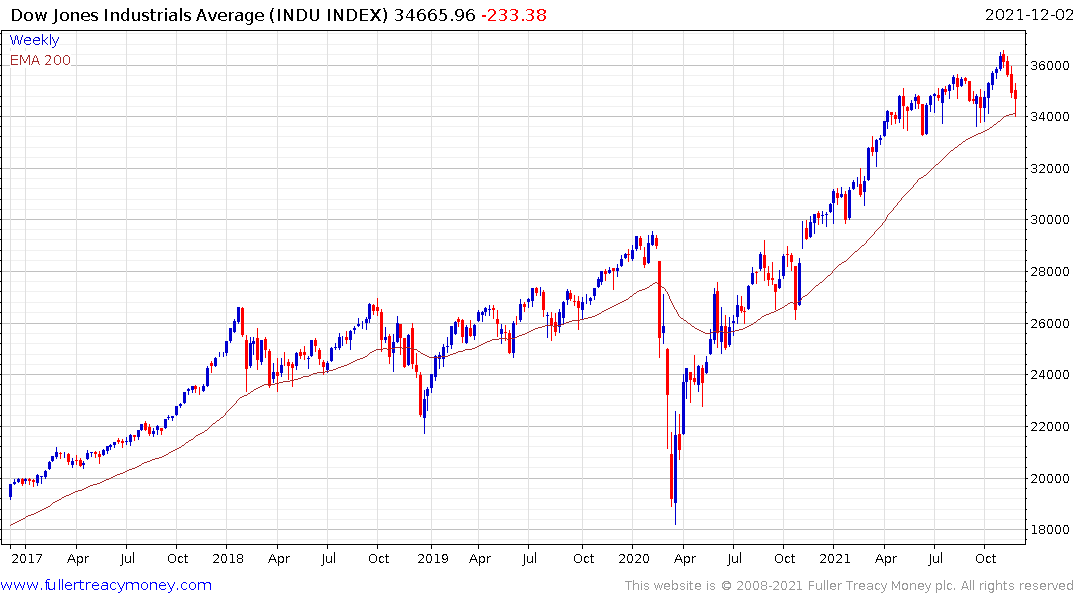 Meanwhile the Dow Jones Industrials Average is bouncing from the region of the 200-day MA today. 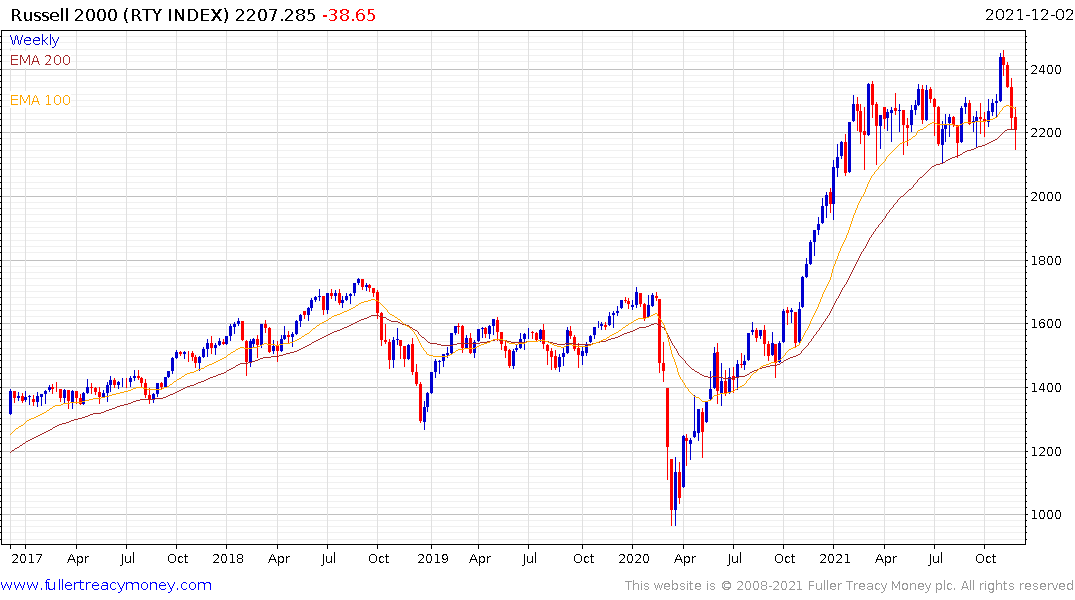 The Russell 2000 failed to sustain its breakout to new highs in early November and pulled back to test the lower of this year’s range. It needs to continue to bounce if medium-term top formation completion is to be avoided. 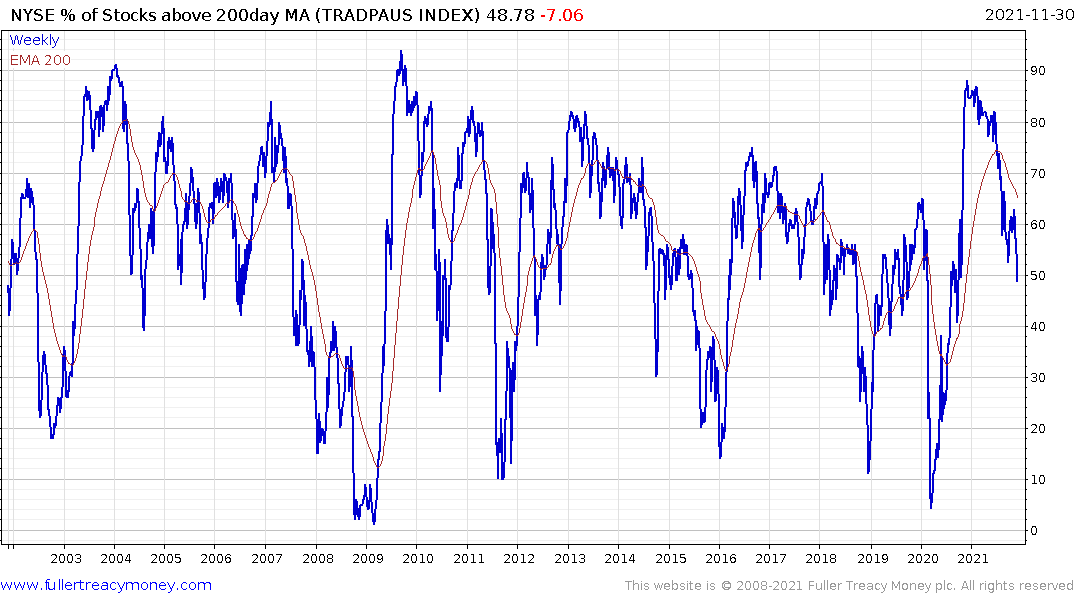 The number of shares trading above their 200-day MA surged after the 2020 lows and is now correcting in much the same it did following the post 2009 rebound. That suggests we are drawing closer to a more broad-based recovery.

It’s certainly tempting to question gold’s place in a world dominated by a narrative of value being created out from nowhere in the metaverse. Ultimately, that bubble will pop but there is no sign of it happening any time soon. 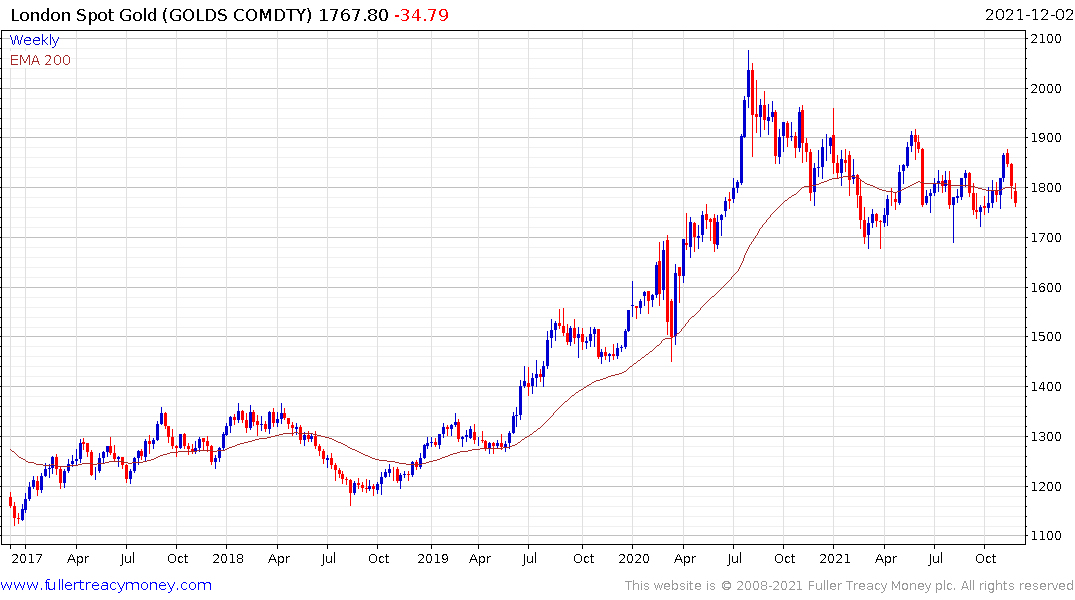 The gold price has been going sideways, albeit with a very mild upward bias for most of this year. It is now coming back down to test the sequence of higher reaction lows and a clear upward dynamic will be required to confirm a return to demand dominance.

The trouble with trading gold is it is maddeningly frustrating most of the time. Most people are shaken out during volatility only for the price to surge later. That encourages rapid participation which leads to disappointment when the acceleration climaxes. Doing well with gold means cultivating a willingness to buy the dips and to take profits following extreme accelerations.