You've been pointing to this risk mentioned by Mohamed El-Erian in this article.

Is there an answer? Can the Fed extricate itself without damaging markets?

"One of the most under covered stories is what’s happening to the US yield curve. It’s on a consistent move up, and that puts the Fed in a very difficult position, because if it allows the curve to continue to steepen it can undermine financial stability. If the Fed wants the yield curve to stop steeping, it has to implement yield curve control, or what they like to call yield curve targeting. But yield curve targeting is a huge step in policy. It would distort the US Treasury market completely. So keep an eye on this, because this is starting to get to dangerous levels."

Also he sounds as if he is saying that trend following is the most viable strategy now - get out when the trend breaks!

"Honestly, I’m really happy that I don’t manage other people’s money. That’s because I know I would go back to doing something that is very tactical in nature: I would be like a surfer on a wave, knowing that the liquidity will end at some point, but going to be on it for as long as I can. I would look around and see that many other surfers are riding the same wave, and I would start wondering what happens if we get into each other's way or if the wave breaks. So I would be a very nervous investor."

Thanks for this article which offers a fresh perspective on the outlook for rates, liquidity and momentum trades. Sometimes it helps to take a birds-eye view.

Wall Street has been rallying since late 2008 so we are in the 13th year of the uptrend. In that time the leading companies are those that benefitted from the introduction of 4G and quick internet connectivity. The second group of companies that benefitted took the biggest bets by utilising cheap abundant credit to the greatest effect. So outside of everything else that has happened, the two big themes have been technological advances and cheap credit. Therefore, it makes sense that those are the topics we need to continue to pay attention to as the trend matures.

The success of China and the USA’s mega-caps has been nothing short of astounding so the big question is how much further they can grow from here. Anyone buying at today’s valuations has to have a reasonable expectation that Apple’s market cap will be $4 trillion in a couple of years or it is hardly worth the effort.

At the CES conference this week the majority of consumer electronics companies see the car as the next big market they can break into. Driver assistance, in-car entertainment and traffic management software are all on the menu. Apple is reportedly in talks with Hyundai about manufacturing its cars so it appears to be intent on pursing an OEM model versus competing directly with other manufacturers. At today’s valuations one is taking a big bet they will be as successful with cars as they were with phones and that Apple will take 10% of global market share within the next 15 years. It represents a massive leap into the unknown and a product will now be available for sale for at least another four years. At the same time competition in the sector is reaching fever pitch. Alibaba announced today that it will also be producing a vehicle.

That suggests we are in the third psychological perception stage of this bull market which can include acceleration higher. That’s the primary reason momentum strategies are attractive at this stage of the cycle.

The big question is how long the liquidity gravy train will help to propel prices. The 10-year yield has at least paused in the region of 1.2% which coincides with the peak from back in March. As long as investors are still sanguine about inflationary pressures, they will continue to buy the dips.

Inflation could easily pop on the upside over the next few months simply because of the base effect and the comparison with where prices were a year ago. Meanwhile agriculture commodity prices are breaking out across the board. However, the Fed has given up on predicting inflation. They are not going to raise rates until there is an abundance of proof that inflation is not transitory.

The rollout of vaccines is going to take at least 3 to 6 months. That suggests the outlook for liquidity remains supportive but not as supportive as it was in 2020. The Goldman Financial Conditions Index has at least paused. Any clear sign of a reversal of the trend of easing conditions would likely act as a lead, or coincident, indicator for a mean reversion on the stock market. Meanwhile, the short-term sequences of higher reaction lows remain intact. 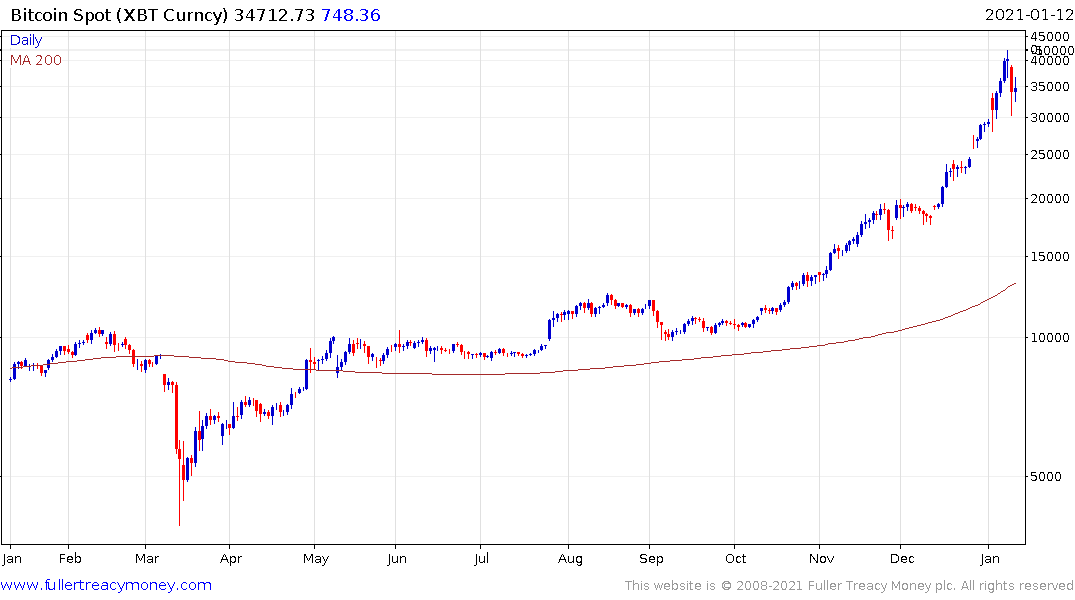 A mania is quickly building in the retail trader sector. Penny stocks are regularly trading serious volume, call options volume is at record highs and keeps climbing and bitcoin is still trending too. I remain of the view that bitcoin is one of the best measures of global liquidity we have. When it peaks it will not do so alone.