Email of the day - on COVID-19 hysteria by Eoin Treacy

I think your analysis of the current situation regarding Covid is spot on. There is now undoubtedly a degree of hysteria infecting the public psyche, though I have to say here in Northern England people are calm regarding social distancing! A great deal of fuss is made of the daily positive test result while the average daily death toll due to Covid is around the 30 mark. In a population of 65 million I would have thought this was bearable. Increasingly strident restrictions are now being applied to University students. The overall effect on the economy is likely to be dire, not to mention the mental health of the population. Ultimately, there is a limit to what folk will put up with.

I read that the USA has had 6m cases and 200k deaths. 'Generally,' this is put out as 'terrible'. But if the population is 330m, that means cases are 1.82% and deaths (thought to be exaggerated count??) are 0.06%. Nobody wants to catch this thing 'just in case' but your remarks about hysteria seem justified.

What we are seeing play out in the response to the pandemic is very similar to the kind of emotional response we see both ahead of a market peak and following a significant decline. Let’s review

News of the outbreak in China broke in January. Between the 20th and 31st it became apparent that the outbreak was impossible to contain and that it was indeed turning into a pandemic with significant scope for disruption.

That was the time to act quickly and decisively. However, just like in the markets, almost no one sells at the top. The people closest to the epicentre of risk have the clearest view of what is going on but it takes time for that information to get out. China instituted an aggressive quarantine and successfully limited the spread of the virus because they had intimate first-hand knowledge of the breakout. Even then, they did not act quickly enough to prevent global contagion. There was news of the virus in China two months before it made headlines internationally.

Most lockdown orders were put in place after the death rate peaked. That’s also very similar to what happens in the markets. Many people panic after they have had direct experience of the issue that is driving the decline.

Importantly, the psychological impact of that event deters most people from action even when the market rebounds they wait for the second shoe to drop. This is directly analogous to fears of a 2nd wave but it will not come.

At The Chart Seminar, I often make reference to meeting a guy in the pub who claims to have just doubled his money in the market. That’s usually when the first rebound has occurred following a decline and aggressive traders capture value opportunities. This weekend I had a conversation with the parent of one of my daughter’s friends who invested aggressively in advertising his online store six months ago. He has grown his turnover by 500% as a result.

The CDC released their best estimate for the infection fatality rate over on Friday. For the most at-risk group which is the 70+ group the fatality rate is about 5% which of course means that 95% of infected people survive. That's much worse than the flu for this at-risk group. By comparison, fatality rates for the rest of the population are statistically negligible. Rather than close down the whole economy it makes sense to simply invest more in looking after the most vulnerable in society, which we should be doing anyway.

We can also see from the above graphic that the best estimate of the current state of affairs is a reproduction rate of 2.5 which is exponential. Therefore, there is still a high risk of contracting the virus but a low risk it will represent more than a bad flu for everyone outside of the old, weak and sick category.

The logical course of action would be to open up and just deal with. Emotionally that is a very difficult thing to do because we are still in the hysterical phase of this response. The next cue will be one country will decide to open up. They will see an exponential rise in cases but not the death toll. Then other countries will follow. Within a year all restrictions will have been lifted. The release of vaccines will accelerate the path to opening up because they represent a security blanket or comfort for consumers. 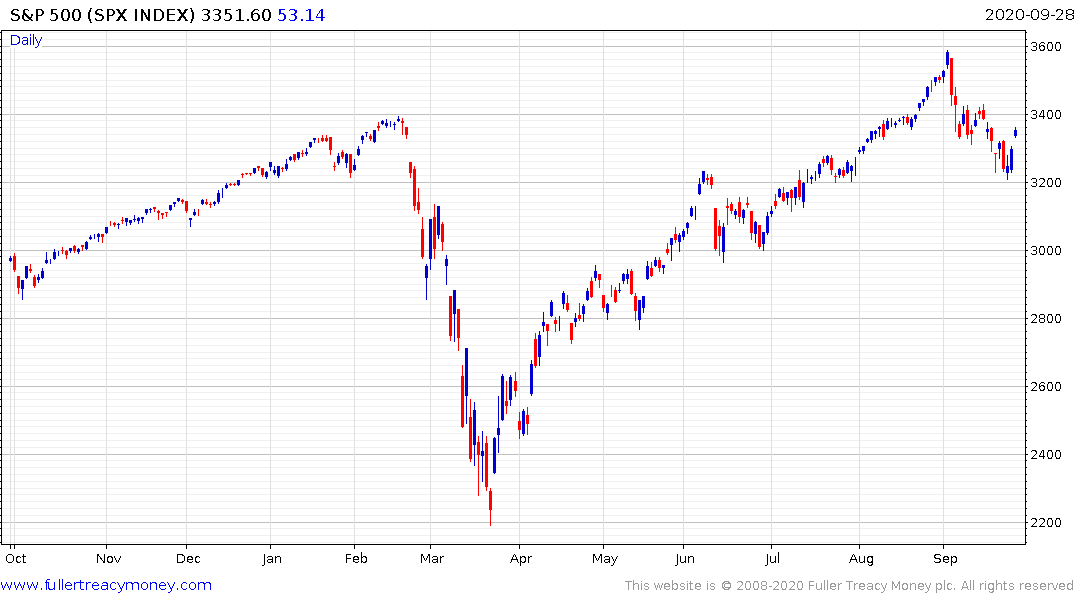 The clear message is evidence of hysteria is an ending signal. That suggests the rebound in the stock market over the last couple of days may represent an important low in the ongoing recovery.