I'm a returning subscriber from the 2005-2014 timeframe. Just listened to today's commentary. I'm well positioned in commodities and emerging markets (especially Indonesia and SE Asia). When the big tech stocks and dollar do finally rollover, won't that take down everything, including what I'm holding? In effect, is it better to sit and wait where I am -- or move to cash now and buy back into commodities/emerging markets when the current bull market in tech and the dollar ends? Would be grateful for any comment or guidance you might have. Thanks.

Welcome back! I’d also like to welcome to all our new subscribers. It’s an uncertain time for many investors and I will strive to make sense of the world as markets incorporate and evolve past the pandemic era.

In last night’s video I discussed the pull of valuations present in many ex-US markets. We are beginning to see individual currencies appreciate in Asia, as they take their lead from the Renminbi’s recent strength. That will attract attention from investors already pre-disposed to invest in emerging markets. 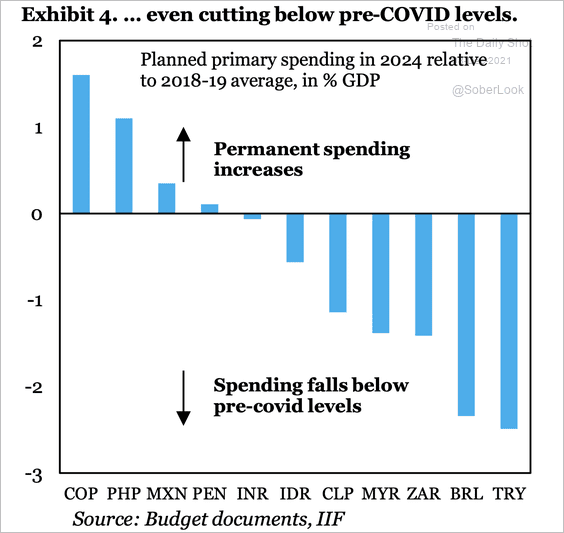 Several commodity related markets are also firming as they tackle spikes in inflation. Countries like Brazil, South Africa, Chile, and Indonesia will be cutting spending below pre-pandemic levels in 2022. That should lend support to their respective currencies and balance of payments data should improve as commodity reprices hold most of their gains. That should help to flatter the performance of their respective stock markets. A catch-up rally is overdue.

Wall Street’s leading eight companies have a combined market cap of $12.2 trillion. It’s impossible to get to that level without most global investors having positions. When they roll over it will have a significant contagion effect on everything else. There is no helping that. However, they do not exhibit top formation development at present and the FANGMANT relative to the NYSE ratio broke out to new highs this week. 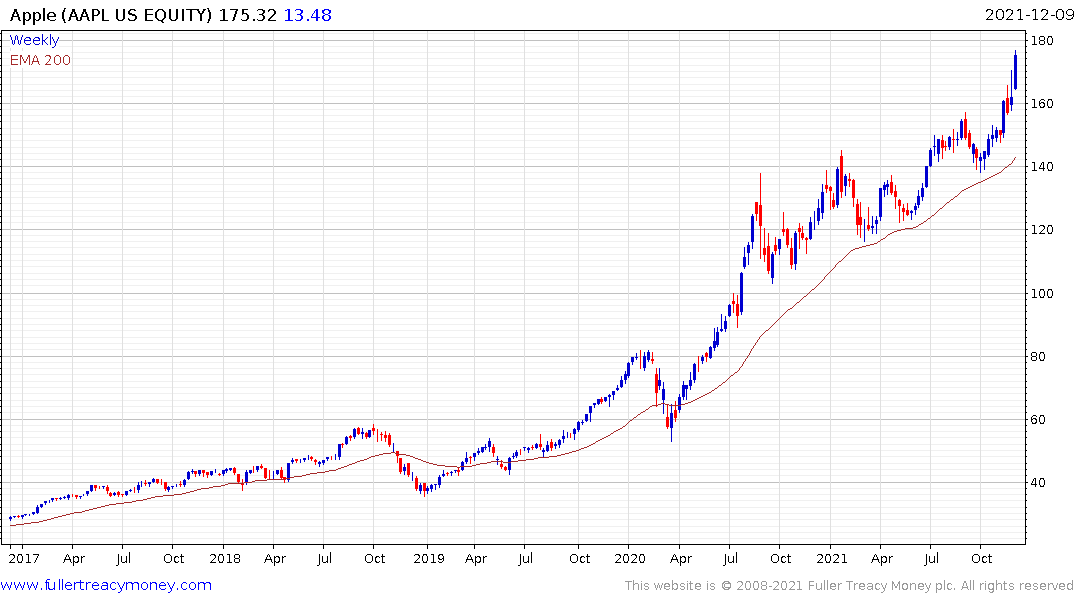 Despite short-term overbought conditions on stocks like Apple, the largest companies continue to thrive.

In any future bear market, the most leveraged portions of the market will suffer most. Ex-US markets are under-owned and less leveraged. They will not be immune, but are unlikely to fall as much and will bounce back faster. Until they roll over, the push factor is less likely to emerge to fuel outsized moves into ex-US markets.

That’s normal in any bull market. The first psychological perception stage of a new bull market is disbelief. That’s where we are now. The crowd does not believe in the potential for ex-US to outperform and does not believe the narrow tech sector could ever disappoint. The next stage is acceptance. We are not there yet so the bull market in commodities and ex-US assets is still in its infancy.

The Federal Reserve is talking a good game about normalising interest rates, but debt servicing costs recovered to pre-pandemic levels this year. Every 100-basis point rise in yields results in servicing costs rising by about $110 billion or 20%.

That’s assuming the quantity of debt remains static. When we take the rising costs of Medicare and social security into account there is a massive ongoing funding requirement. That’s before we even begin to think about the spending programs proposed to forgive student debt, pay for childcare, fund climate action and ease social divisions. 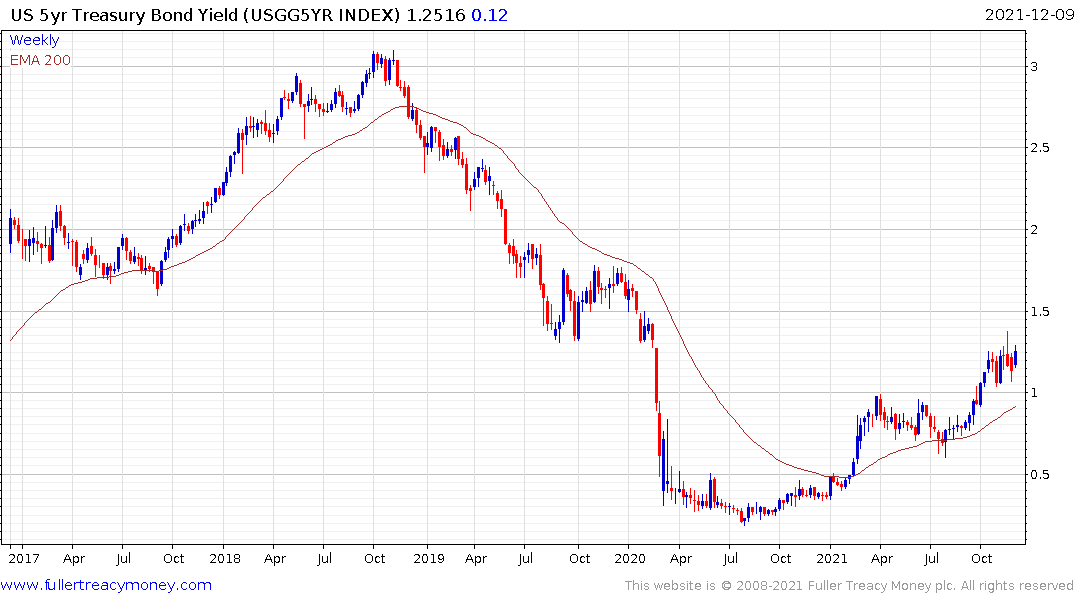 The Fed may go ahead and accelerate the taper and raise rates once for the sake of appearances but how much can they really raise rates when the impact on the bond market would be so profound? That suggests inflation will need to trend higher for years before the Fed and the population at large are willing to make the sacrifices necessary to correct the fiscal condition. That could take a long time because the condition of the polity remains heavily divided with both sides convinced of the rightness of their actions. 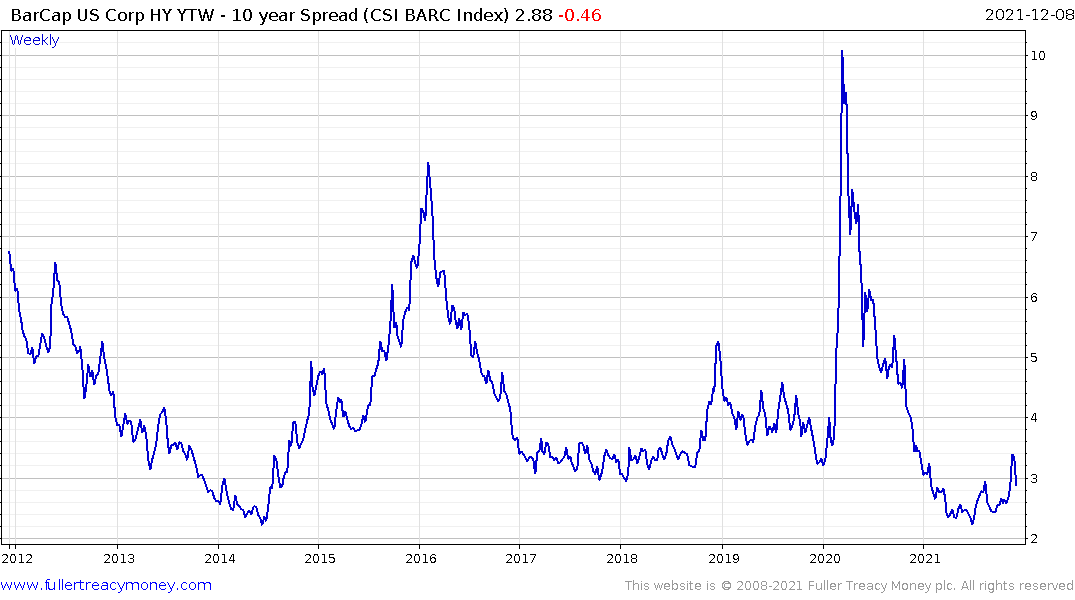 It’s usually unproductive to question the sustainability of a bull market until we have evidence liquidity is in fact tightening. High yield spreads are attempting to breakout and are currently pausing in the region of the trend mean. Market strife generally accompanies moves above 500 basis points.