Lane’s remarks suggest he will advocate for patience as the ECB waits for signs of persistently higher inflation to materialize. Price growth in the euro area is running at the fastest pace since 2008, propelled by energy and a number of statistical effects related to the pandemic that should fade next year.

Still, persistent supply bottlenecks have fueled concerns that price pressures could remain elevated for some time. At a separate event on Monday, Lane’s Dutch Governing Council colleague Klaas Knot struck a more cautious tone when he warned against underestimating inflation risks that could force the institution to tighten monetary policy.

“There is more in the inflation process we don’t understand than we do understand,” Knot said, adding that price pressures may turn out to be stronger than currently projected.

The central bank is preparing to unwind emergency monetary stimulus as economies in the 19-nation euro area turn a page on the coronavirus crisis. Most ECB officials have pointed to missing wage pressures when arguing that the current inflation spike is largely transitory.

The big bet central banks are making is today’s inflation is similar to the spike that accompanied the rebound from the financial crisis. In the two years following the stock market low in March 2009, commodity prices surged to new all-time highs; fuelled by a near 50% increase in money supply. As that flood of new money subsided and governments began to run fiscal austerity, inflation subsided while growth remained positive but modest.

The big difference on this occasion is restive populations have no patience for fiscal austerity and are instead agitating for better wages, work conditions and benefits. The outsized fiscal response to the pandemic rammed home the point wages lagged growth over the last decade. How else could someone receive more from unemployment than from working? That suggests the wage growth has further to go.

The burden of regulations has increased significantly since 2008. That is particularly true of environmental concerns where new rules on shipping, oil and exploration and emissions containment have greatly increased costs. It’s not an exaggeration to say the effects of climate volatility are been inflated by government policies.

This interview of Russell Napier highlights his view that governments will ultimately force banks to lend them in what he calls Financial Repression 2.0. Here is a section on which will need to do this first:

When America stays at 13.5%, it's come crashing down, interest rates are down. But more importantly, the household sector in particular is devalued. The corporate sector hasn't. So, it's more robust, and interest rates can go up. But France and China are just over 20%. More historically, that is exactly the level where you've had issues. When interest rates have risen, issues we go back through the three periods that are covered by the database. 1998 in Asia. 2007 obviously in America. 2011-12 in the European sovereign debt crisis. Any countries that have a private sector debt service ratio up towards 20%. if interest rates go up, they find themselves in a crisis. So those are the countries that have to repress first, because most of the countries really were... they just can't permit market-determined interest rates. So it's a bit of a toss up at the minute as to who goes first, is it China, or Europe.

But the bottom line is the dollar goes up. I've long been a fan of the dollar. And that is a very non consensus opinion. Hasn't actually been a correct opinion but this is incredibly bullish for the United States dollar. I think Americans may be certainly pessimistic about the long term outlook for property rights in America. And you certainly won't hear me saying that America can avoid financial repression because it can't in the long run. But it's the last to go. Interest rates can go up somewhat and that's when we see the real shock. We see a tightening, not dramatic tightening, but we see some moves by the Central Bank of America, and deadly silence in Japan, China, and Europe. And then people begin to realize that a financial repression is coming somewhere else before it comes to America. And remember, the crucial thing about this is most people will tell you that currencies are real effective exchange rates, the interest rate differentials, and that's what [inaudible] interest rates, and for a long time it was true. 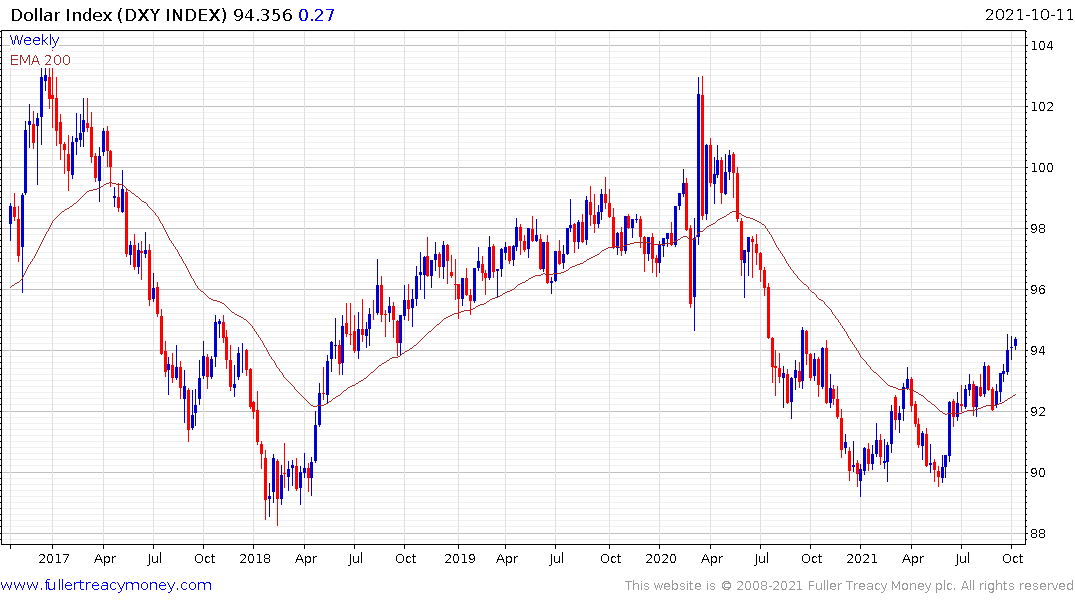 The Dollar Index continues to trend higher and has rebounded over the last few days to confirm near-term support in the region of the August peak.