ECB's Failure to Communicate Frustrates Markets
Comment of the Day

Frankfurt, we have a communication problem. And that could feed into a growing ECB credibility issue –- even as European bond markets are shrugging off details of today’s confab.

Markets crave clarity on pandemic bond buying, and instead are getting ambiguity. Madame Lagarde again warned against reading too much into weekly PEPP purchases. They are not the most relevant -- what matters more are the monthly numbers, she said, and accounting for redemptions, those reveal that “significant” increase pledged in March. They have “readily implemented” that ramp up as of March 16 -- and are continuing to do so clearly and without any wavering, according to Lagarde.

Except the data suggests otherwise looking at the recent run-rate. There is no “normal” pace of bond purchases given the need for flexibility and the ongoing pledge to preserve favorable financing conditions -- no wonder ECB-watchers are exasperated. Sure, risks to the outlook remain balanced in the medium-term and Europe remains an “economy on crutches” -– but so much for any clarity on the semantics around “significant” and what exactly front-loading means.

At least Lagarde confirmed that policy won’t be in tandem with the Fed. That much seemed obvious. As for significant PEPP purchases, guidance remains a case of constructive ambiguity -- let’s wait for those monthly numbers, and maybe more excitement in June.

The ECB has opted to talk their way through providing assistance rather than actually doing it. That’s the only signal we can gain from their unwillingness to put numbers of the purchases they are willing to make while at the same time saying they will be as large as needed.

The ECB is wary of stoking inflation since that is the one policy objective enshrined in their mandate. That suggests they are much less willing than the USA to run the economy hot. At the same time, they are unlikely to be the first to raise rates. That should continue to put act as a stabilising influence on the Euro.

Central bank total assets have increased by $10 trillion (50%) over the last 12 months. That is helping to inflate asset prices everywhere and has been a significant contributing factor in bitcoin’s success. 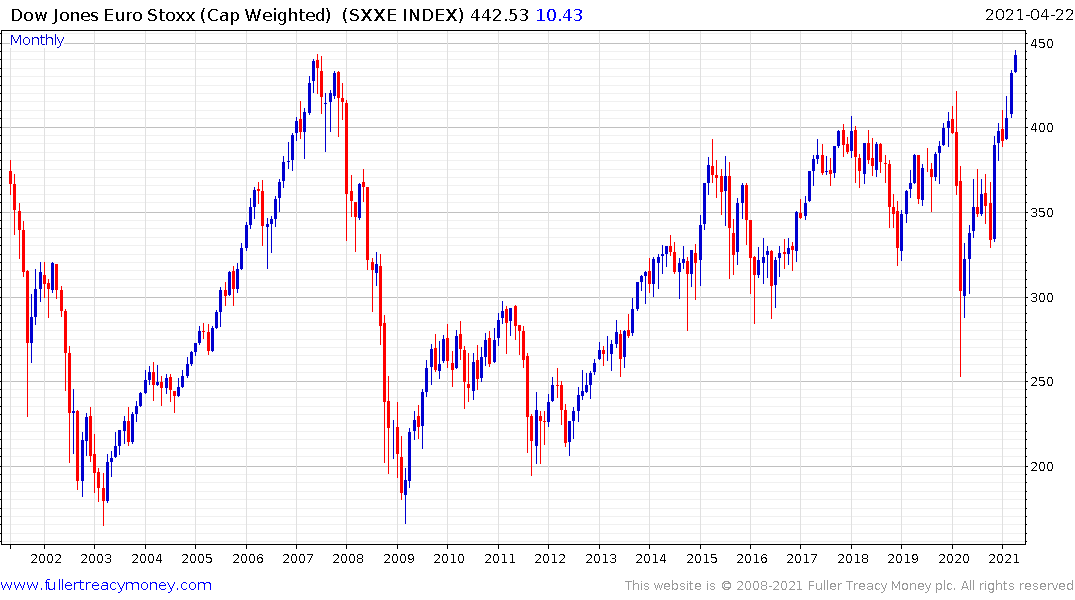 Meanwhile the Euro STOXX Index exceeded its 2007 peak this week as it tests the upper side of a 20+-year base formation. 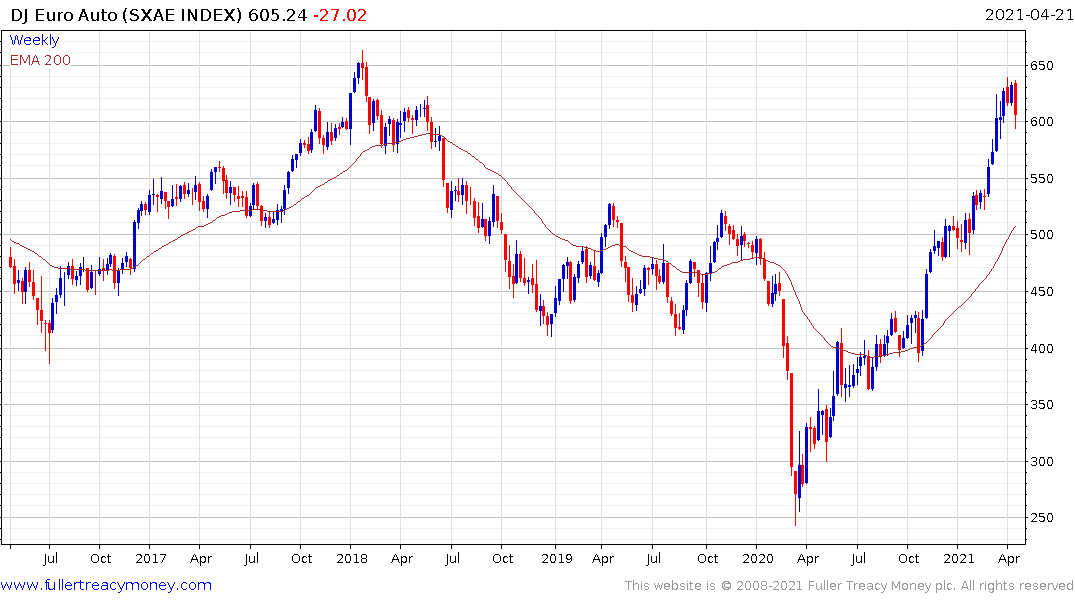 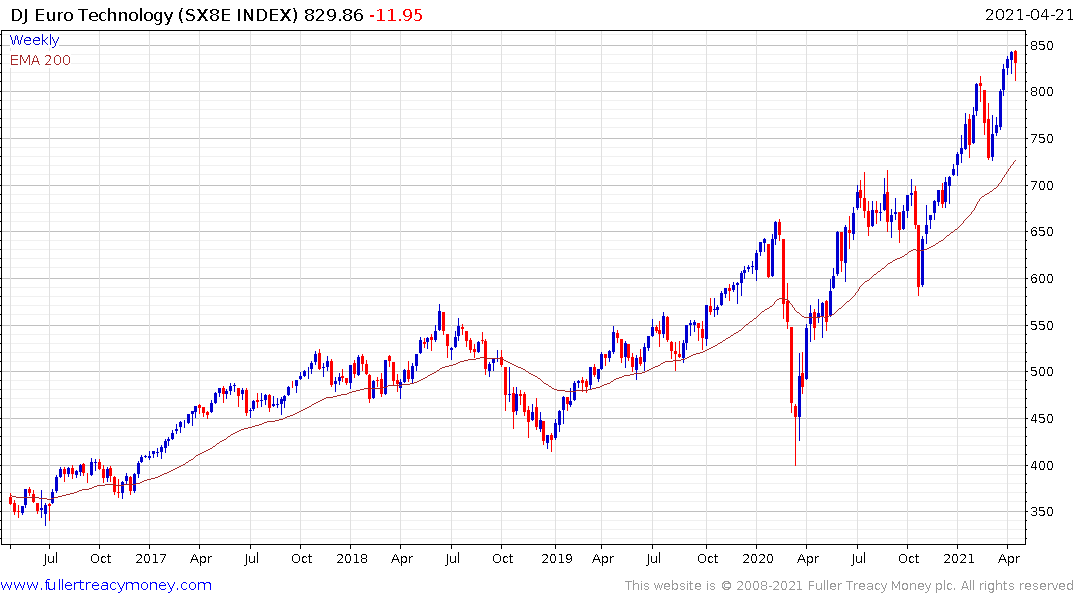 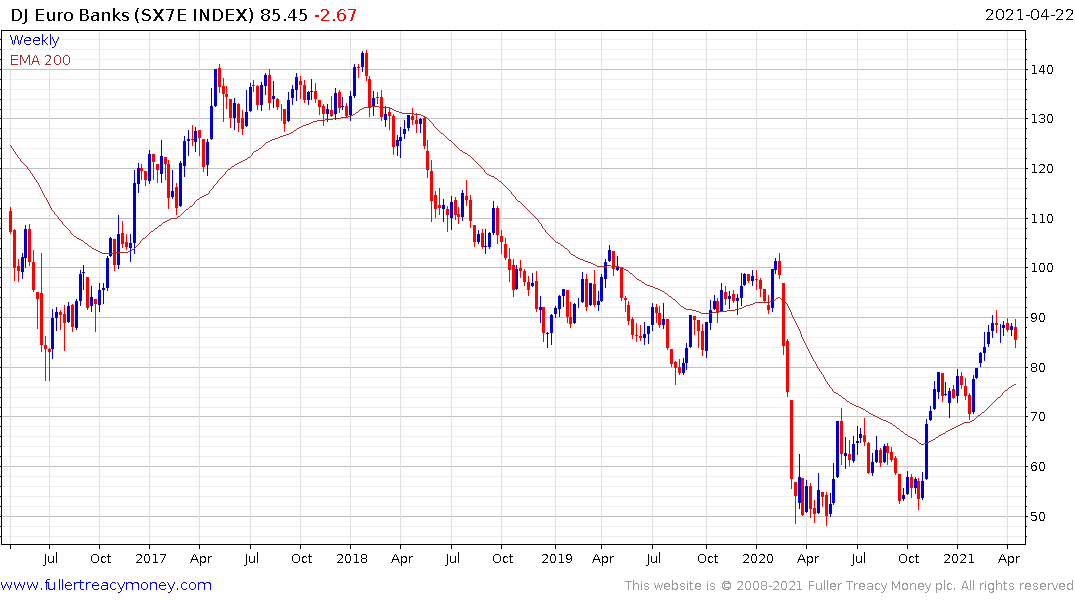 The Autos, Tech and Banking sector are leading the way on this recovery.