The pandemic purchases were ramped up in March when the U.S. rebound was fueling a global rise in borrowing costs while the euro zone was in a double-dip recession. The ECB will unveil new economic projections that should confirm a far brighter outlook as vaccinations pick up.

A European Commission report on Friday showed economic confidence in May at the highest level in more than three years as restaurants, hotels and shops across the region start to reopen.

Yet in a sign that the recovery remains fragile, French data on Friday came in much weaker than expected. Consumer spending fell 8.3% in April from the previous month, more than twice as much as forecast, and first-quarter gross domestic product was revised to show a decline. Finland also posted an unexpected contraction.

Over the past few decades there have seldom been times when European equities outperformed the S&P500. The equity cult in the USA is much stronger than elsewhere which creates demand for domestic growth stories. The presence of strong consumer brands, companies with long histories of paying and increasing dividends, the ready supply of new exciting stories from Silicon Valley and the largest consumer base in the world means Wall Street has tended to outperform.

However between about 2002 and 2007 European stocks outperformed. Despite the fact Europe played a pivotal role in providing telecom and media companies during the 1990s, Wall Street outperformed. The period from the early 2000s was when the Dollar trended lower and lent an additional tailwind to European equities. 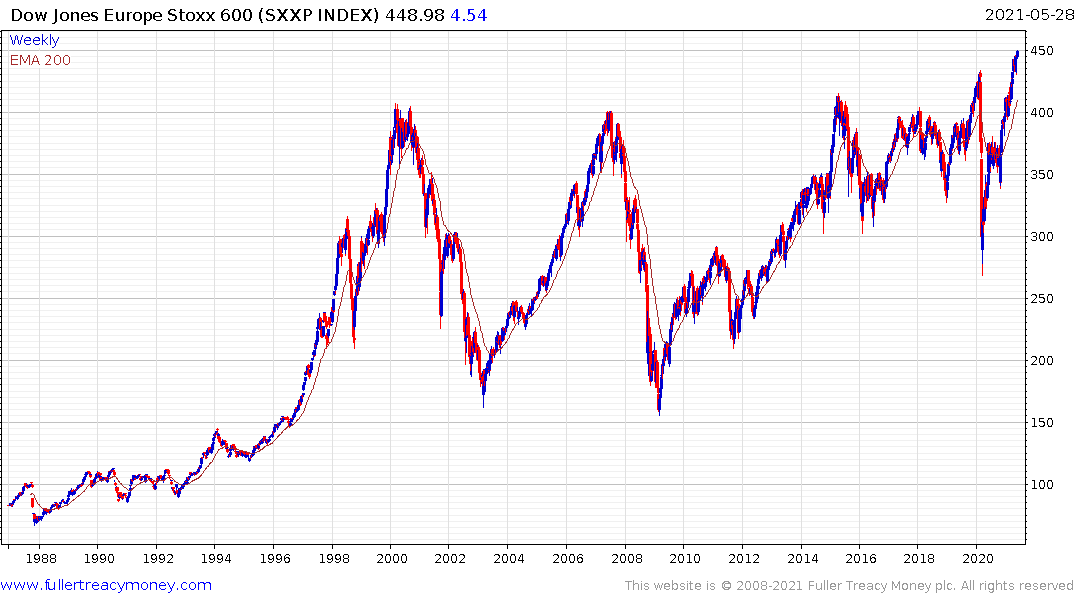 The reason I raise this point today is because this chart of the Europe STOXX 600 currency adjusted to Dollar and divided by the S&P500 bears a striking resemblance to the growth/value ratio I have been showing in the Subscriber’s video for the last couple of months. It suggests that if the Dollar breaks down, there will be greater demand for value stocks and since Europe trades at a lower valuation it should also benefit.