EBay Inc. warned investors that its sales boost tied to the pandemic and government stimulus checks may be coming to an end.

Shares tumbled as much as 7% in extended trading Wednesday after the online marketplace issued a revenue forecast for the current quarter suggesting spending on the site could recede as more people get vaccinated, businesses reopen and stimulus checks dry up.

Investors are watching to see which companies can build on their pandemic gains and which will fade. Google parent Alphabet Inc., Facebook Inc. and Shopify Inc. all hinted at lasting momentum in their earnings reports this week, sending their shares higher. EBay joined social media platform Pinterest Inc. as a potentially short-lived pandemic phenom.

“This is a relative challenge for EBay to not be able to fully hang on to the gains from the pandemic,” said Ygal Arounian, an analyst at Wedbush Securities Inc.

Rebounding consumer behaviour, renewed hiring and generous handouts have boosted earnings for all manner of consumer companies in the first quarter. That has been particularly true for the mega-caps with Apple, Google, Facebook and Microsoft all posting impressive results.

The fact that about half of people are better off unemployed than working has also helped to boost consumption of goods in particular. Those benefits will expire in September so there is still room for revenue support absent the spikes associated with stimulus cheques.

The challenge for investors is the stock market is forward looking and will price in the loss of that additional benefit long before they expire. Amid short-term overbought conditions mega-cap companies have not improved on their post-earnings breakouts. That’s a warning that enthusiasm about the persistency of earnings growth may be waning.~ 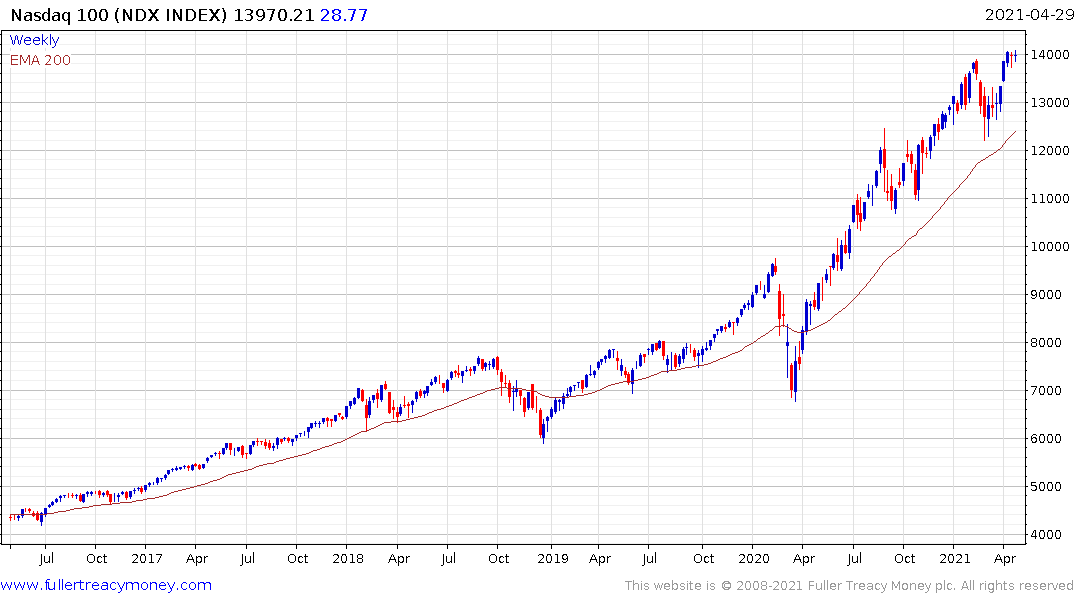 The Nasdaq-100 continues to pause in the region of the February peak and the round 14,000 level. Trading has been very inert over the last couple of weeks. The breakout, when it comes, is likely to be dynamic is nature.

The 1000-day moving average is about the best barometer we have for secular bull markets. No big bull run moves in a straight line.  There are medium-term corrections along the way and these can be quite severe. However, we generally see the region of the 1000-day MA holds during these corrections and offers the most advantageous point to initiate long positions on a buy the big dip basis.

The S&P500 dipped below the 1000-day MA for a day in March 2020 and has since rebounded in an extremely impressive manner. Historically, overextensions relative to the 1000-day MA of between 25% and 35% have precipitated periods of subpar stock market performance. The overextension at present is 32.93%.

In June 2015, the Index was 35.93% overextended relative to the 1000-day MA and subsequently spent more than a year ranging.

At the peak in March 2000, it was 38.8% overextended before the Index halved in value over the ensuing three years.

With the condition of the market as it currently stands, one has to be betting that a bubbly environment, similar to what was witnessed between 1996 and 2000, is about to unfold in order to continue to remain be fully invested. In that time the market more than doubled. 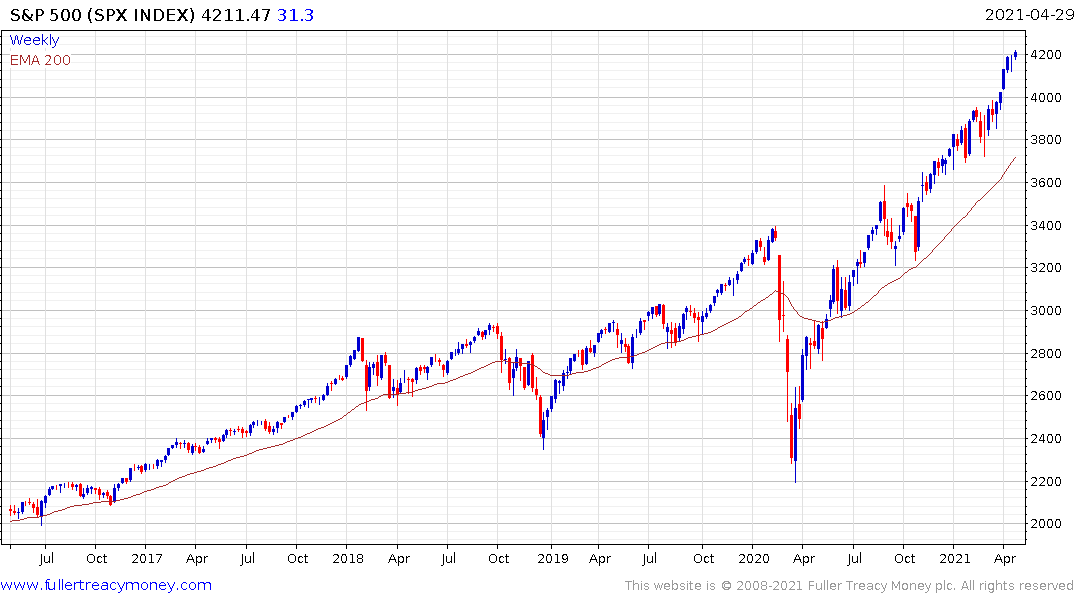 The pace of the Index’s advance is picking up, both monetary and fiscal policy are very accommodative and sentiment is improving. That suggests a better than even chance we are entering a bubble phase of this secular trend. The surprises are likely to be on the upside, short-term overbought conditions notwithstanding.