Investors will keep a close eye on UMich inflation expectations, due at 10 a.m. NYT. Another piece of the inflation picture that bears attention is the auto supply-chain crunch that’s been an exceptionally large contributor to rising prices.

News from Toyota adds to signs that supply issues may finally be easing. The carmaker is targeting greater December output than it’s seen in recent years, with next month set to be the first time in seven months that all of Toyota’s production lines in Japan will be operating normally.

That follows an Oct. 31 report that GM had no chips-related downtime scheduled in North America, the first time it had been able to resume full production since February. BMW’s results showed it’s muscling through the chip shortage, and Ford said revenue and profit rose due to increases in chip availability and vehicle shipments. Smartphone chipmaker Qualcomm‘s outlook, and steel and freight shifts, have also added to recent signs of broader relief.

Yet consumers may not feel like there’s been a downshift. U.S. used-vehicle prices rose 9.2% in October, according to Manheim Auctions; the index was up 38% from a year earlier. Reported used-vehicle inflation is also lower than suggested by the Manheim index, suggesting another big print for November’s CPI, as my colleague Cameron Crise pointed out.

There is clear potential that we are looking at the peak of supply disruption for chips. This is obviously a nuanced topic because there are lots of different kinds of chips and not every sector requires the same types of components. However, on aggregate, the supply of chips to the sectors that have contributed most to inflationary pressures is improving. 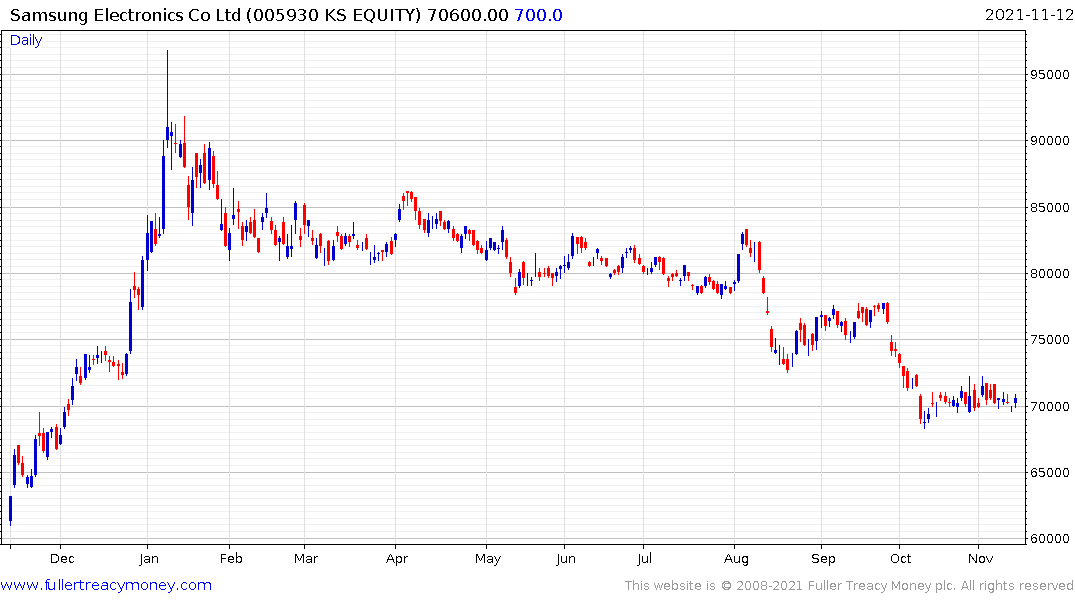 The underperformance of Samsung Electronics is reflecting the growing oversupply of memory (DRAM and NAND) chips. Since Samsung is dominant in the production of these chips it is susceptible to falling margins as supply overwhelms demand. That is symptomatic of the cyclicality which has classically affected the chip manufacturing sector. Once supply is increased, it has to remain in place despite diminishing returns over time.

Taiwan Semiconductor stated months ago that it would increase supply of microcontrollers (for the auto sector) by 60% by the end of the year. That’s why the major automotive companies are reporting fewer issues. 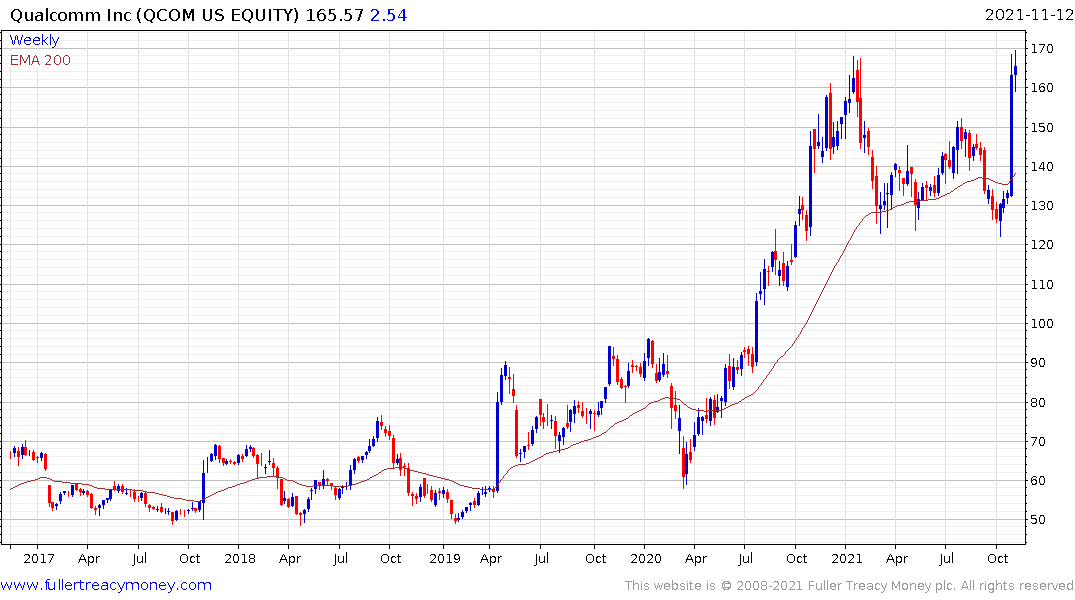 Qualcomm has avoided the worst supply disruptions by hiring both Samsung and TSMC to manufacture its designs. Apple has underestimated demand and is lagging. 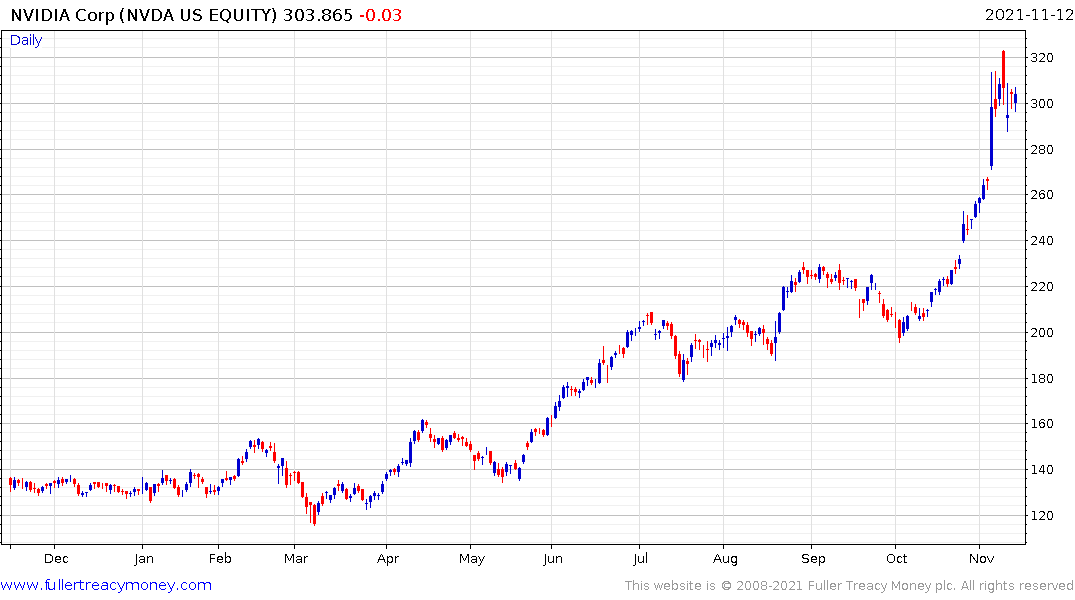 Meanwhile NVidia continues to dominate graphic chips design but has utterly failed to anticipate demand. Both AMD and Intel are now stepping in to supply graphics cards and that will ramp up in early 2022 with Intel launching its graphics card. https://www.pcmag.com/news/inside-the-gpu-shortage-why-you-still-cant-buy-a-graphics-card 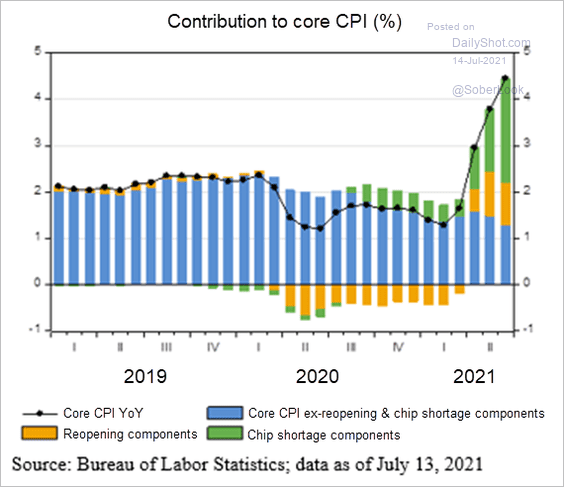 I posted this graphic in Comment of the Day on July 15th. The fact that the inflationary inputs were peaking in July, but inflationary reports are hitting record highs today, helps to highlight just how lagged the effects are. Importantly if shortages are easing, the number of new vehicles available for sale will increase next year. That also suggests that the millions of people who want to trade in aging leases will have a new car made available. The peak in used car prices will occur in 2022.

I’ve been at pains to articulate this rotation in commentary over the last couple of weeks. The factors that contributed to inflation in 2021 are unlikely to be headline grabbing in 2022. Instead, there is likely to be upward pressure on prices from a new basket of goods and services. That’s particularly true of the food sector because of a shortage of migratory workers and fertilisers. There is also significant potential for geopolitical factors to continue to affect the energy sector. Wage demand growth is also likely to continue to trend higher because the pandemic has resulted in a significant acceleration of retirements. Copper also still has considerable scope to surprise on the upside as infrastructure spending ramps up. 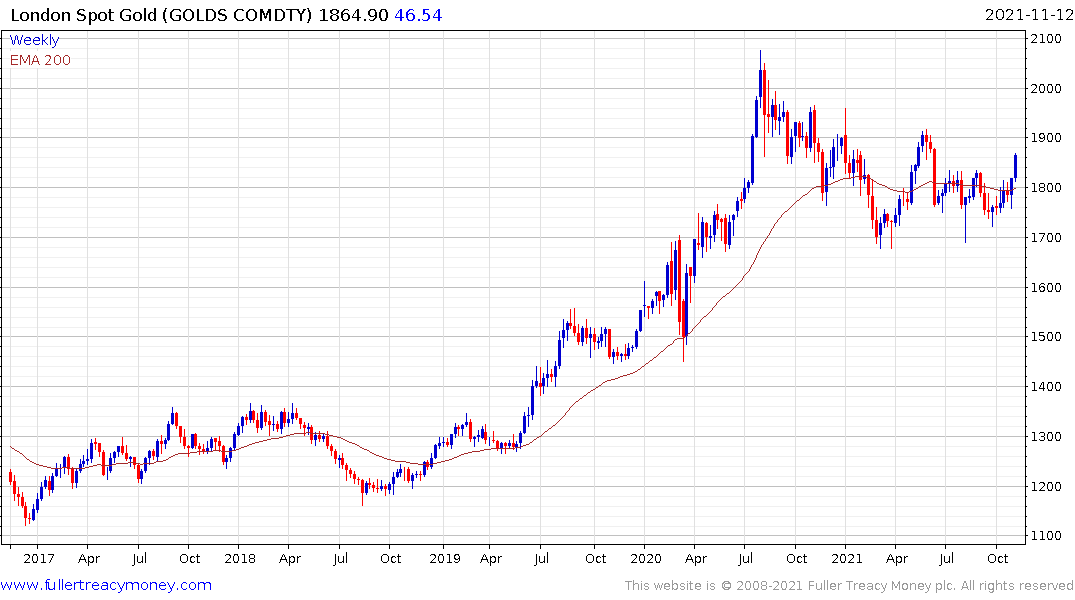