Our earnings recession call is playing out even faster than we expected. When we made our call for a greater than 50% chance of an earnings recession this year, we thought it might take a bit longer for the evidence to build. On the back of a large downward revisions cycle during 4Q earnings season, it's becoming more clear. Consensus numbers have already baked in no growth for 1H19 (1Q projected growth is actually negative) with a hockey stick assumed in 2H19 that brings the full year growth estimate to ~5%.

History says be skeptical of the inflection forecast. The projected y/y EPS growth in 4Q19 is ~9.5%. This compares to an average projected rate of growth of 1% over 1Q - 3Q19, an inflection of ~8.5%. Since the early 00s, we have seen this kind of inflection happen a few times, but these inflections were all related to 1) comping against negative or slower EPS growth or 2) tax cuts mechanically lifting the growth rate. Neither of those forces are at play this year. In fact, it's the opposite making the achievability of these estimates even more unlikely.

When consensus is embedding an inflection further out, downward revisions, some drag on price returns and higher volatility are all to be expected. We examined what tends to happen when consensus embeds a big jump in growth 4 quarters out compared to the next three quarters. We found that the numbers for all 4 quarters ahead tend to fall but the growth quarter tends to fall the most. If current estimates move in line with history, we could see a full year decline of ~3.5% in S&P earnings. There is a wide range of potential outcomes though, so today we only take our base case forecast down to 1% y/y growth. We also found that equity returns can still be positive in this environment, but they will likely be weaker than they otherwise would have been and the odds of outright price declines are substantially elevated. Whether prices move higher or lower, volatility tends to rise meaningfully., with average year ahead price volatility realizing ~5% more than the full period average.

Is the trade war the primary reason behind lower expectations for earnings in 2019? That’s a big question for the wider market because if the USA and China can come to an accord that will improve confidence which will allow companies to begin to make plans on a sounder footing than they have today. However, there are other important factors that are worth considering.

Personally, I suspect it is likely the end March 1st deadline will be extended based on the fact some progress has been made and more needs to be agreed upon. That has been one of the primary tailwinds for the stock market over the last seven weeks as the short-term oversold condition has been unwound and is increasingly being replaced with a short-term overbought condition. 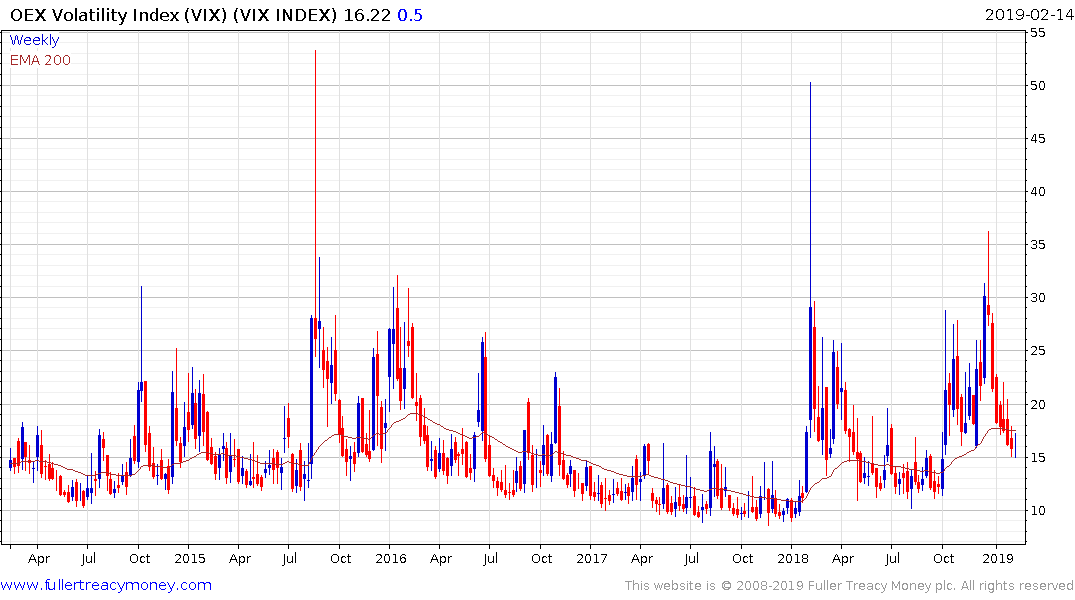 The VIX Index dropped today to retest the 15 area. That’s a testament to just how persistent the rally has been and how demand for a hedge has deteriorated. The Index is now testing the upper side of the base formation formed between July and September so it is a natural area where investors will ask questions about the persistence of the advance.

Quite aside from the trade war, border wall or plunging VIX, the prospect of the Federal reserve ending its QT program this year is a considerable factor in the rebound in risk assets. Here is a section from a Reuters' article:

“At coming meetings, we will be finalizing our plans for ending the balance-sheet runoff and completing balance-sheet normalization,” Mester said in remarks prepared for delivery in Cincinnati. “As we have done throughout the process of normalization, we will make these plans and the rationale for them known to the public in a timely way because transparency and accountability are basic tenets of appropriate monetary policymaking.” 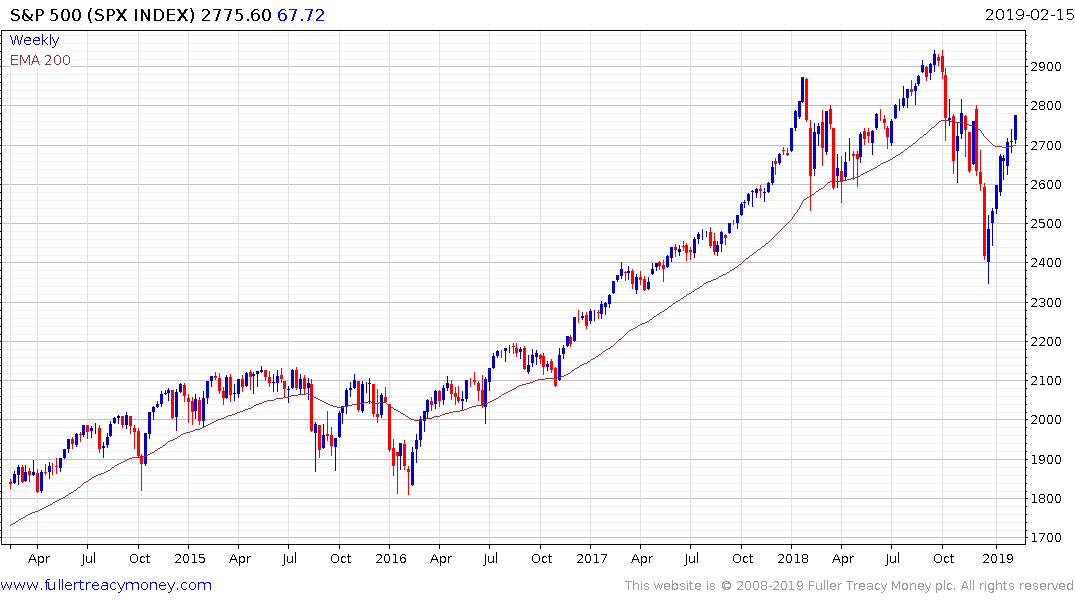 Tightening liquidity has been one of the primary reasons for the loss of consistency on major stock market indices over the last 12 months so with the Fed rolling back its commitment to tighter conditions, Europe considering additional stimulus and China on the cusp of a fiscal and monetary push there is scope for significant additional liquidity to hit the market and spur investor interest in the market once more.