“The consensus out there seems to be: ‘Don’t worry, the Fed has your back,’” said Druckenmiller on Tuesday during a webcast held by The Economic Club of New York. “There’s only one problem with that: our analysis says it’s not true.”

While traders think there is “massive” liquidity and that the stimulus programs are big enough to solve the problems facing the U.S., the economic effects of the coronavirus are likely to be long lasting and will lead to a slew of bankruptcies, he said.

“I pray I’m wrong on this, but I just think that the V-out is a fantasy,” the legendary hedge fund manager said, referring to a V-shaped recovery.

Druckenmiller’s remarks are among the strongest comments yet by a Wall Street heavyweight on the bleak outlook facing the U.S. They also stand in contrast to the optimism that has pushed the S&P 500 Index to rally almost 30% since its March low even as the pandemic has brought the economy to a standstill, seized up credit markets and ended the longest bull market in history.

The damage spurred the Federal Reserve to unveil a raft of emergency lending programs and Congress to unleash almost $3 trillion in stimulus funds. But those programs aren’t likely to spur future economic growth, Druckenmiller said. “It was basically a combination of transfer payments to individuals, basically paying them more not to work than to work,” he said. “And in addition to that, it was a bunch of payments to zombie companies to keep them alive.”

Have we just seen an impressive countertrend rally in an evolving medium-term bear market, or are we on the cusp of seeing an additional down-leg which could see new lows posted? It’s a multi-trillion Dollar question but another related one is how are investors responding to Jay Powell’s statement today.

When Jay Powell stated the Fed is not looking at negative rates, it contradicts what the bond market has priced in. If the Fed is not going to cut rates into negative territory they are going to have to stimulate in other ways. That means massively increasing the size of the balance from already elevated levels. Faced with the threat of outright deflation, as consumer behaviour moderates and some lockdowns are extended, the Fed could find itself buying equities.

The catalyst for such an action would be an additional decline. Therefore, the balance of probabilities is we have seen a peak of near-term significance in the stock market because they are unlikely to act with the Wall Street only a few percent from the all-time peak. How successfully major indices hold their March lows will be deciding factor in supporting the bullish or bearish views.

In a best-case scenario, the 1000-day moving average will offer support for the S&P500 and the consolidation will be limited to a reasonably tight range. 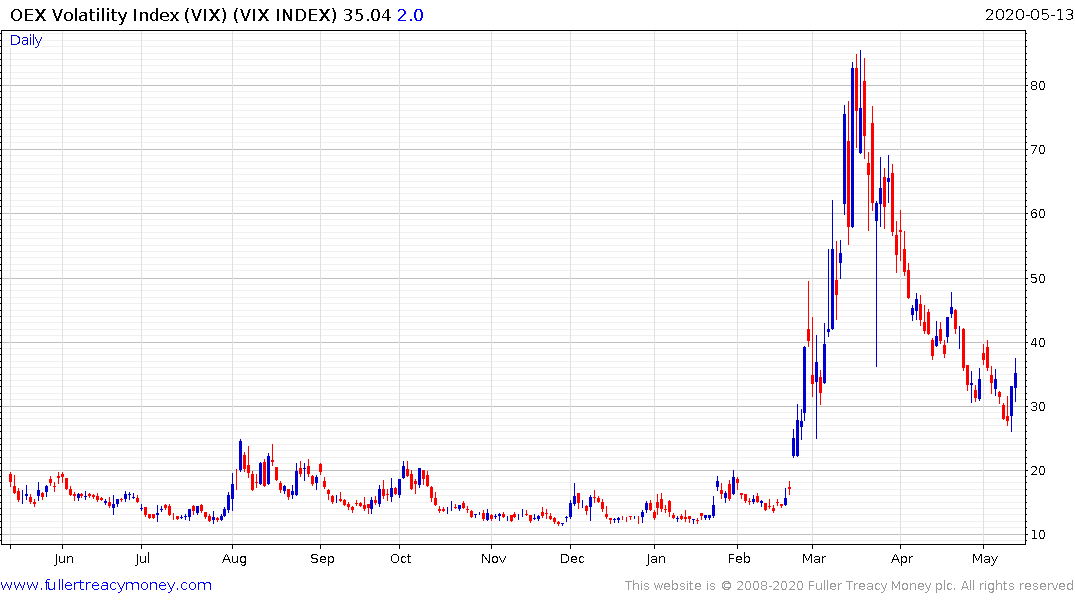 Meanwhile the VIX Index posted an upside key day reversal today, from the upper side of the underlying base formation.